Hello:
Well, looks like I got rid of the hotspot after cleaning and aligning optics, so I made a test image and here it is.
Was taken with a 6" f/12 AP-refractor working @ f/48 with a Baader Herschel wedge, the camera was a SKYnix 2-2 with a 0.5X reducer and a Continuum Baader filter at the nose, on a hazy and cloudy sky.
Happy fathers day and thanks for looking.
Eric. 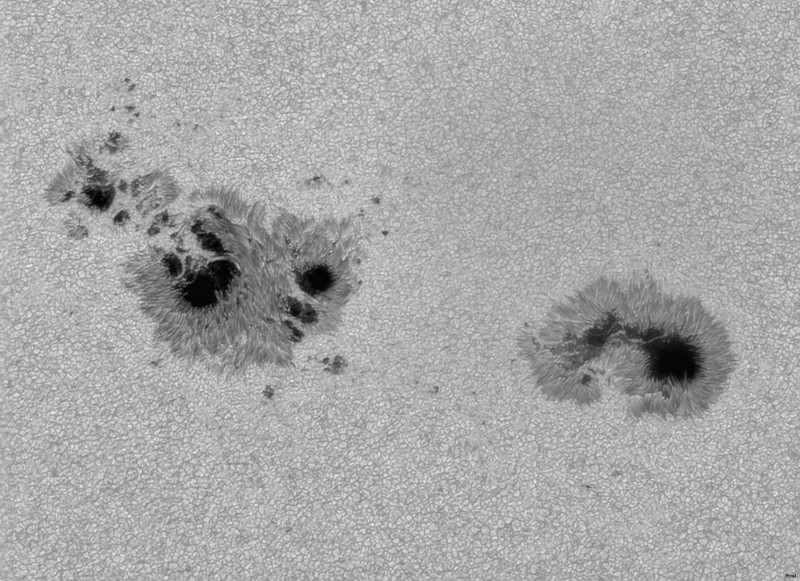 That certainly works! Looking good there...

Wow!! that is a killer WL shot

Perfect WL image for such a modest aperture!

Thank you all.
Best regards,
Eric.

Incredible detail Eric! Thanks for sharing!

a wonderfull result from the fathers day, just cleaning and aligning?

Pedro, Oivind, Theo and Walter:
Thanks for the comments.
BTW Walter, well not just was the cleaning and aligning, I also made a flat. :-))
The 4X Powermate had its big diameter lens covered with sort of an oily smudge layer (probably mold), that scattered the light too.
This is the problem caused by not using my 6" f/12 AP refractor for almost 6 months and leaving it mounted, with bricklayers building a wall putting a concrete beam and modifying the inside of the observatory.
I don´t want to think how many times the scopes and mounts were bumped, but as for the 6" f/12, I had to realign the objective and focuser, as also its polar alignment. :-(
Best wishes to all,
Eric.

That's a fantastic result from a 6" aperture, Eric - congratulations!