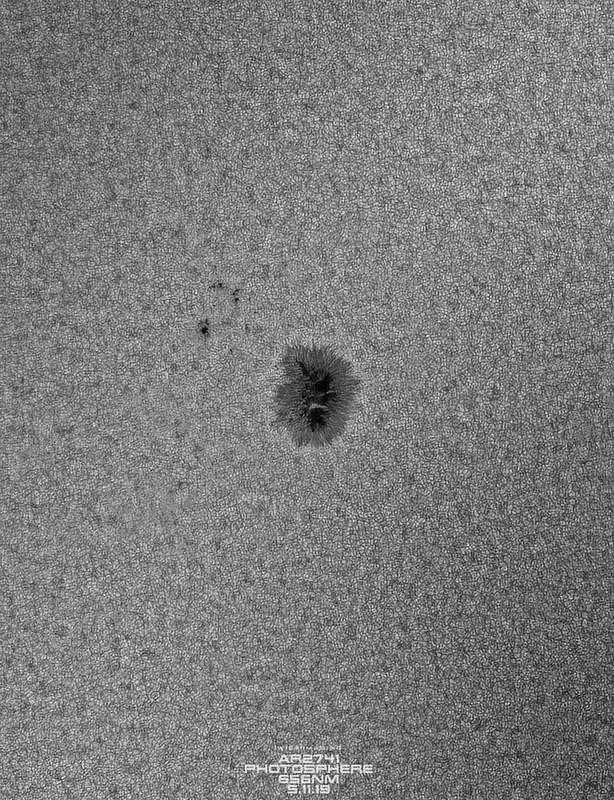 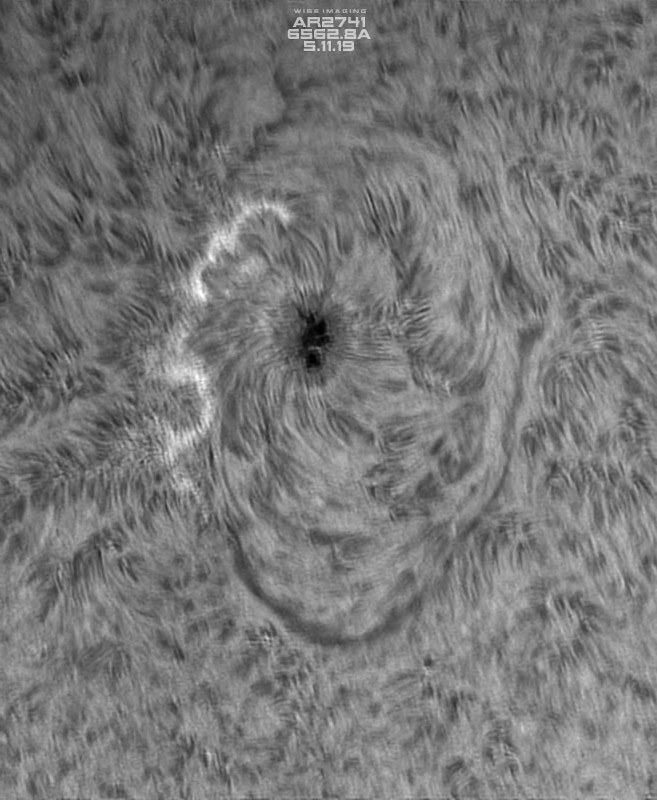 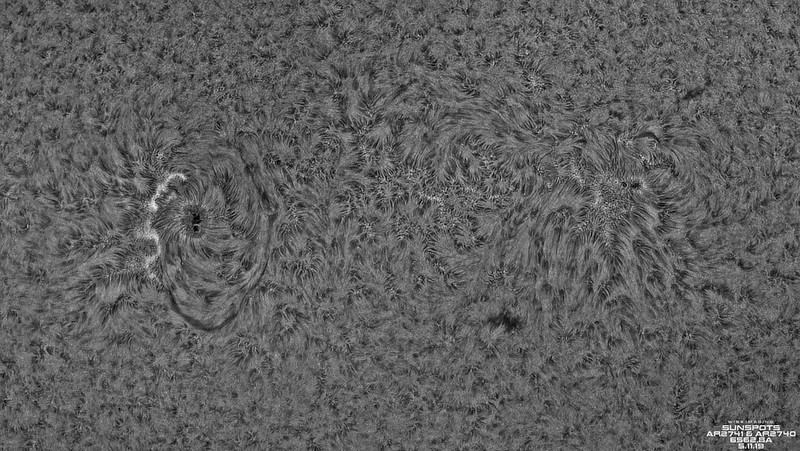 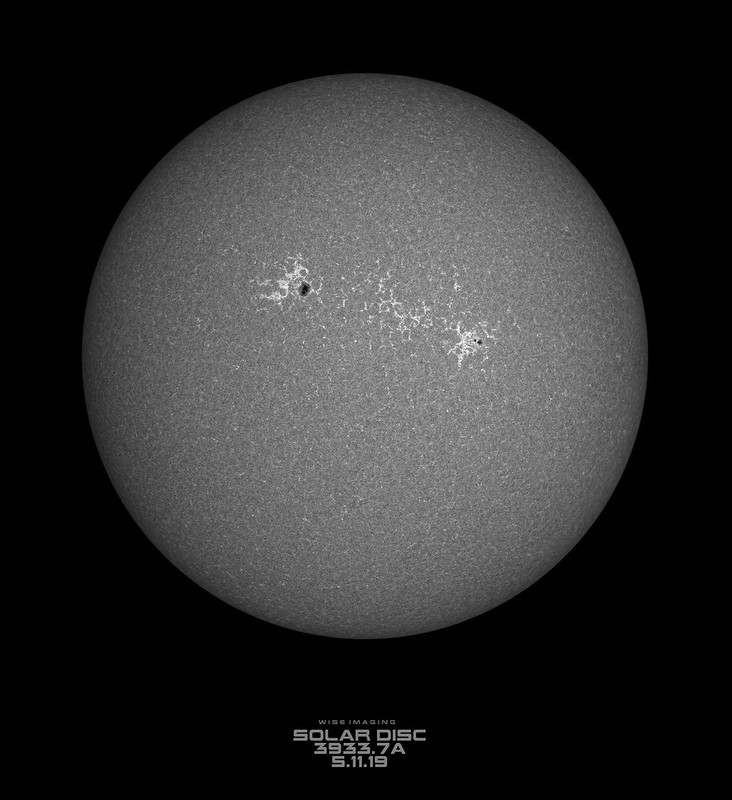 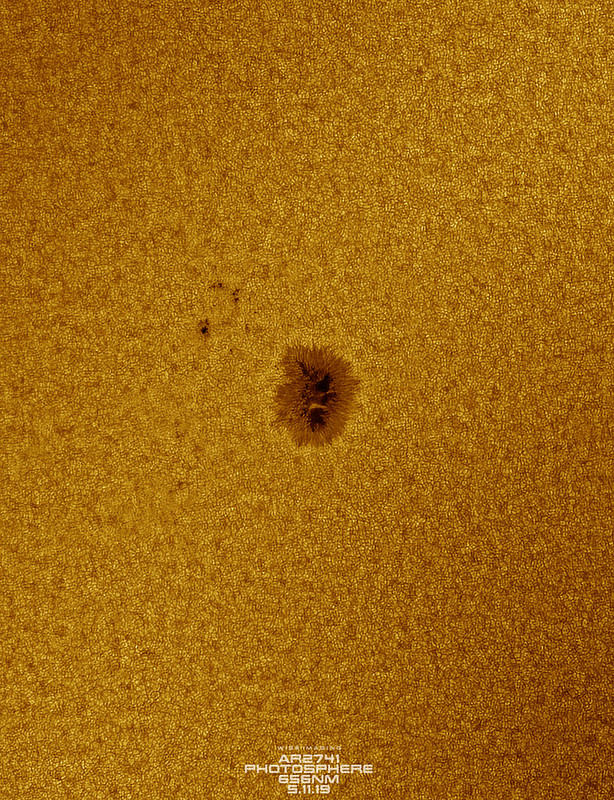 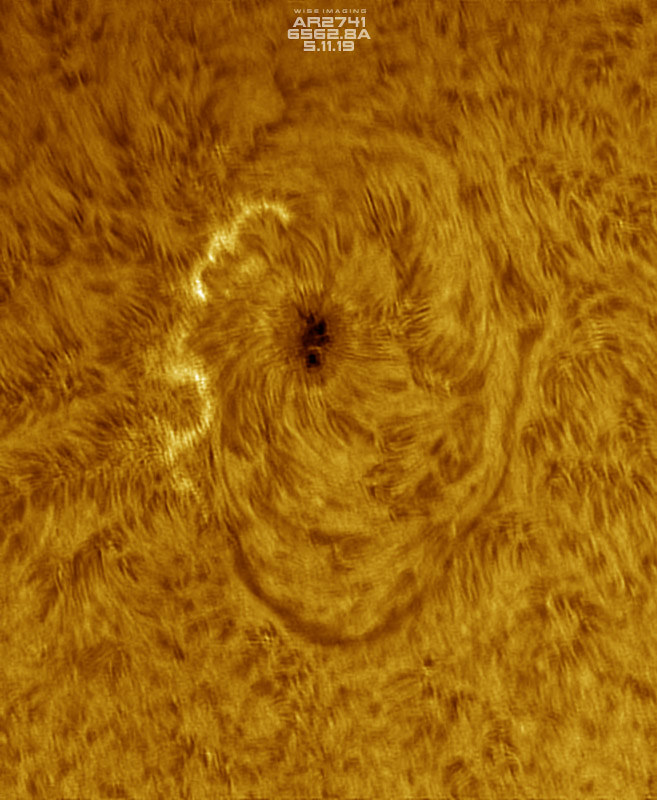 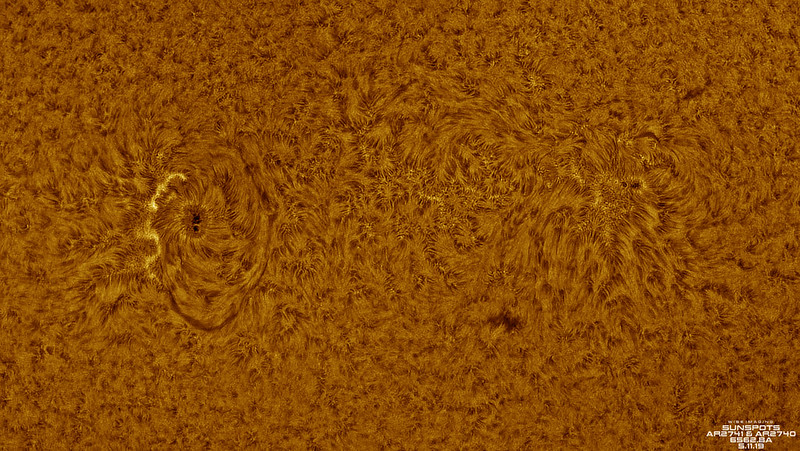 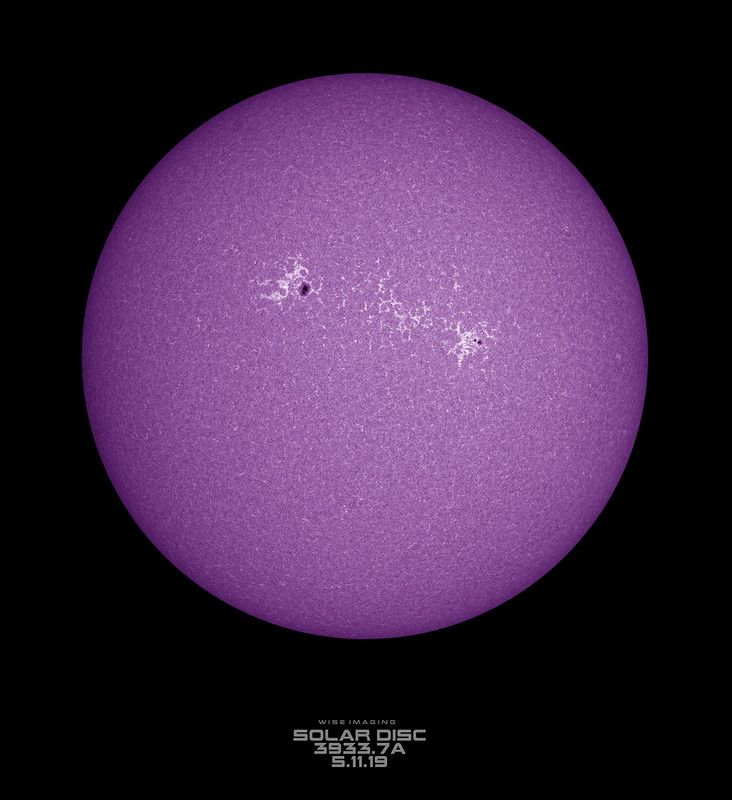 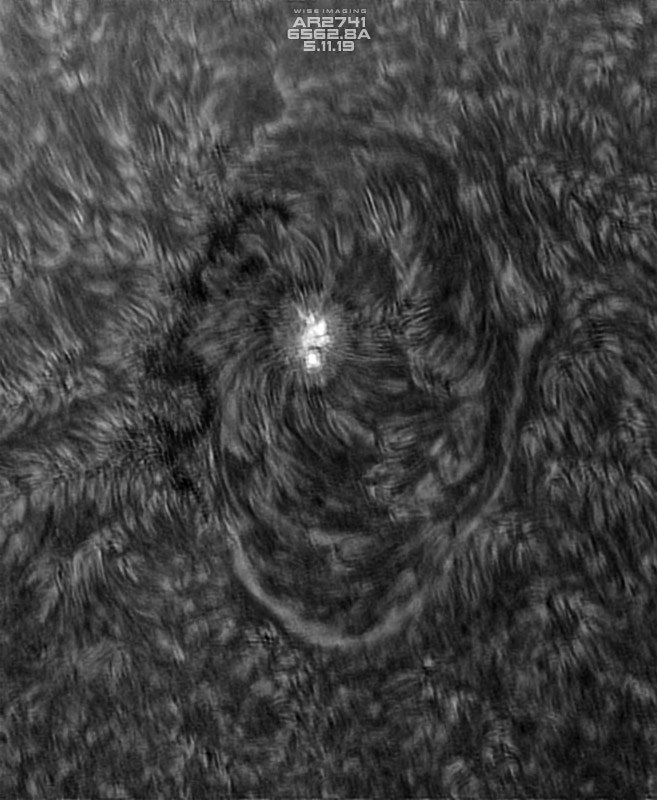 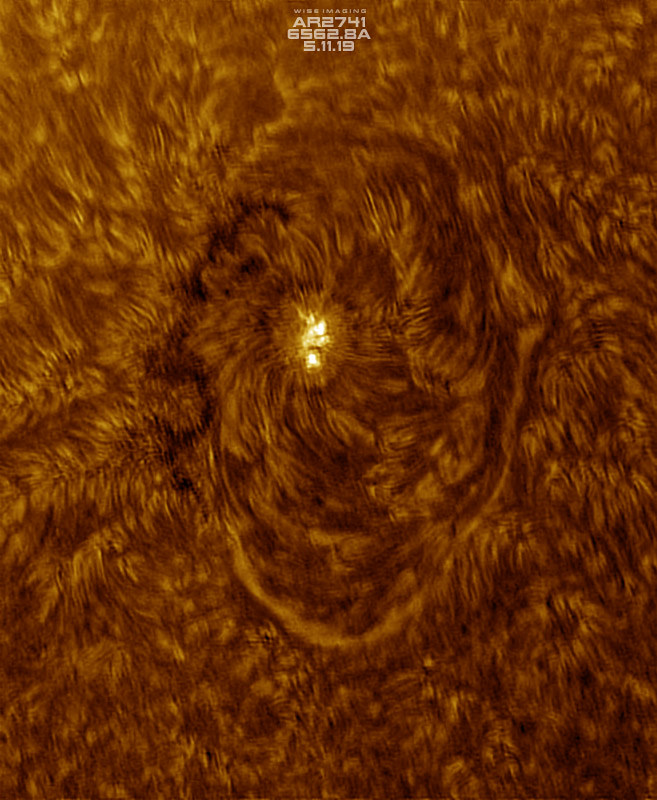 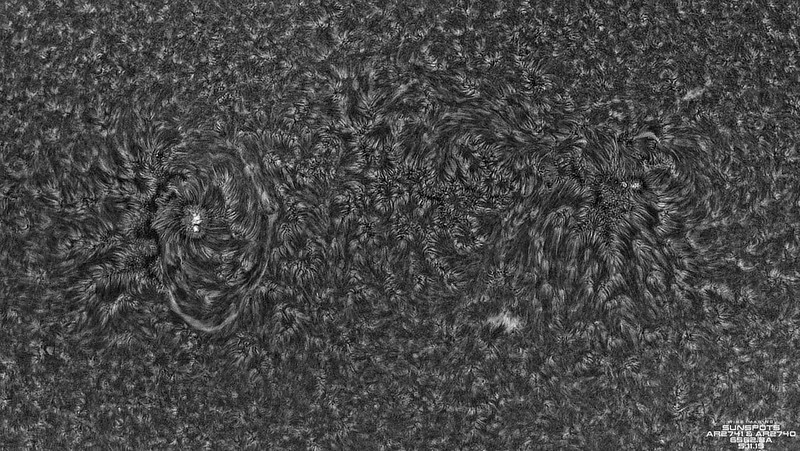 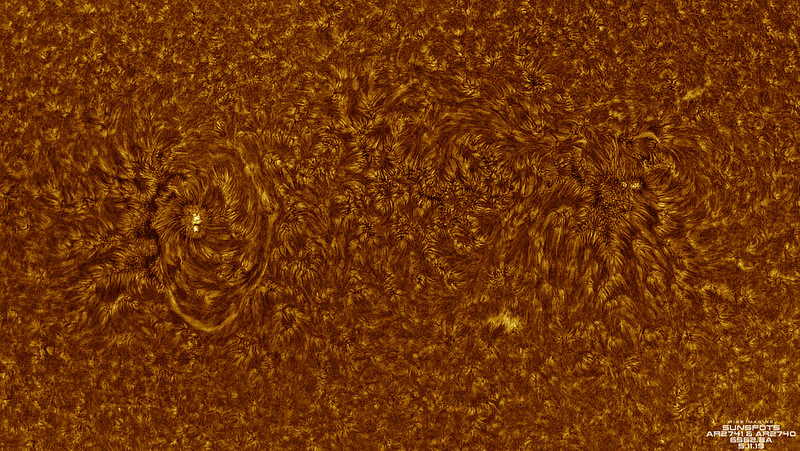 Tried a little something different today. Playing around with a 200mm F6 Quartz mirror. 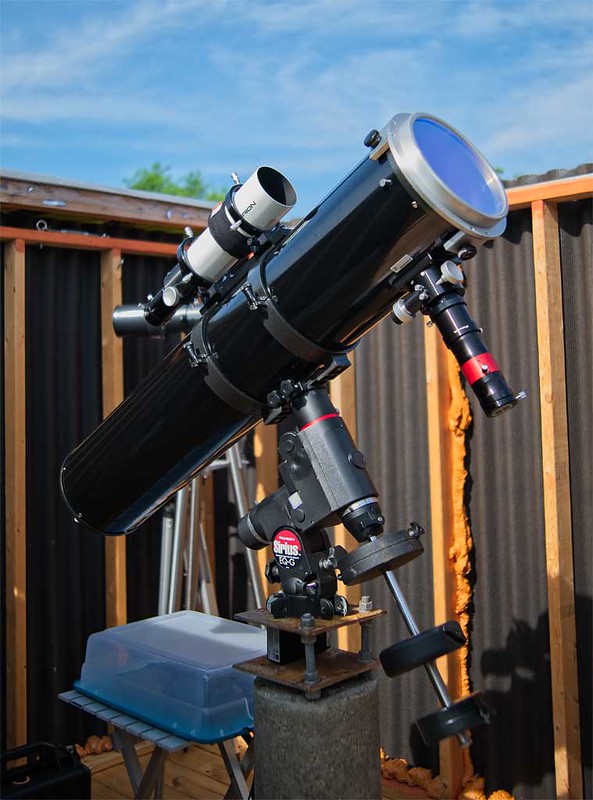 Love the granulation Marty. Thanks for posting.

Did all these come from the Newtonian, or just the Ha...I see the Quark in the pic?

You had a great session there Marty, really good images. What's your thoughts on the reflector?

Thanks all, stormy season early here (April Showers bring May Flowers...) so seeing is all over the place.

Good so far. My goal was to replace my C8 Edge with something that would be more favorable in shorter wavelength. After some conversations, I went with a F6 quartz mirror to try this with. I just didn't have enough time nor the conditions to properly evaluate it. The main test will be at 430nm & 393nm when I get some time and seeing that allows me to explore these wavelengths at this aperture. I liked the C8 Edge, but it really isn't ideal for short wavelength. I also like the absolute simplicity and inexpense of a reflector. It balanced nicely and my 80mm achromat riding it is happy. It handled local seeing well (evidenced by the white light images, so my poor seeing was due to atmospheric, not local seeing). I mounted reflectix via velcro attachments in key places to keep items from overheating and becoming heat sources to plume into the OTA. I'll put more time on this instrument and if it performs well at 393nm & 430nm (better than the C8 Edge at least) then I might get a motorized focuser for it. 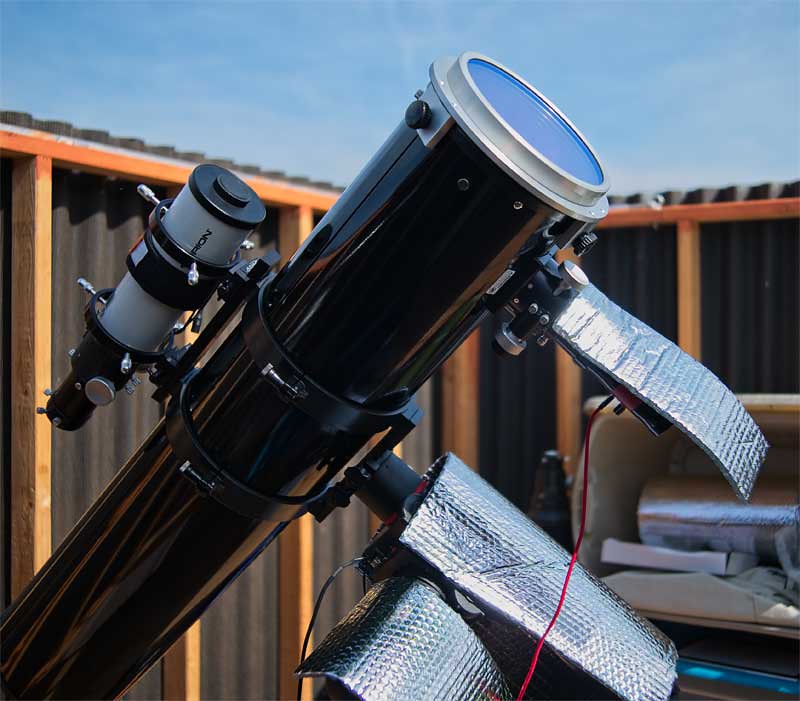 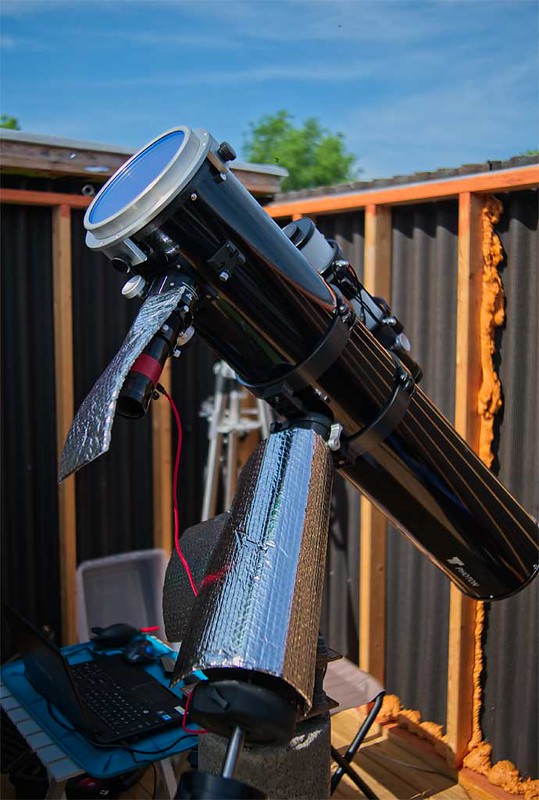 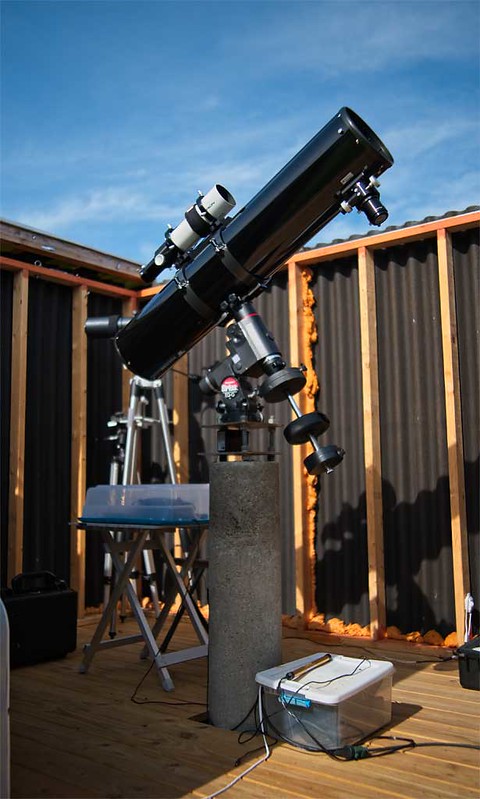 Yessir, everything came off the newtonian this session except the small scale images, those came out of the little 80mm F5 achromat. The larger scale images were all off this 200mm F6 mirror. Granted, everything above that is large scale is 656nm at different bandpasses (one being ultra narrow and chromospheric, one being much less narrow and so photospheric). I will soon add some 393nm & 430nm examples as weather and conditions allow to explore what the mirror can do.

The D-ERF I use is tri-band so it passes 393nm, 430nm & 656nm. I keep my white light at 656nm right now, but will add 430nm soon for G-band. Otherwise, it passes CaK at 393nm and of course HA just narrower with the Quark. My D-ERF was sized with the filter cell so I could use it on a variety of instruments. It could also of course be used as a sub-aperture D-ERF on a larger refractor, but, that's a pipe dream. 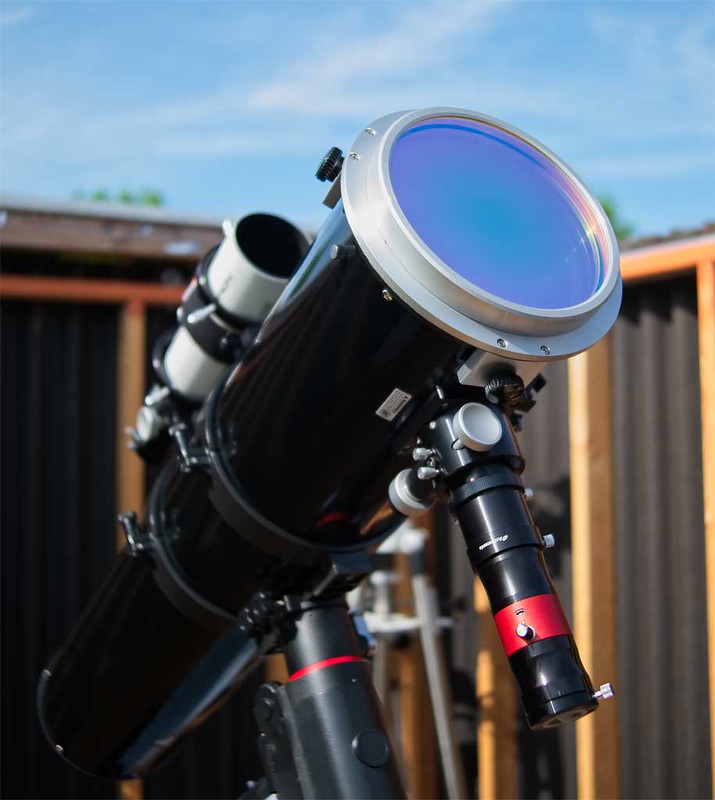 It's not a cherry picked quality mirror. I'm sure I could have it sent off and polished to a high degree of smoothness and measured, but that's a scotch taste on a beer budget, so not going that route. I took a gamble on a quartz mirror from Germany (TeleskopService) after talking to them and after having conversations with a few CaK imagers, I tried to get it as long as I could, so F6 was it. I couldn't find good F8 quartz mirrors that were not custom and require a custom housing and stuff, not ready to go there yet. Ultimately if I was going to spend a lot on something, I'd get a 200mm refractor lens and have Siebert Optics build the OTA and keep it unobstructed, but that is too expensive for me at this time (would require a new mount too, so even more expensive), so I opted for an inexpensive scope option that should potentially do better than my C8 Edge, but copy variation is always a factor, so I'll have to put in more time on this one. So far it handles 656nm great (white light above), seeing just went into the dumpster fast so I barely got anything else before having to drop my imaging scale significantly.

Thanks for the info Marty

Well, I must say that you give the definition of "aperture fever" a whole new meaning. (-;
Interesting approach, a battle between a normal Newton with a D-Erf and a Newton with a special coating like The T250 Solar Newton presented here. The coatings were done by MCM Optique in France.
The coated Newton has to be an open truss telescope, but can be lighter because there is no heavy D-Erf. Both need off course to be well collimated. In the end the coated version may be cheaper than the D-Erf Newton.
Did you do a star test to test if the collimation and the quality of the mirror is ok?

bart1805 wrote: ↑
Sun May 12, 2019 9:53 pm
Well, I must say that you give the definition of "aperture fever" a whole new meaning. (-;
Interesting approach, a battle between a normal Newton with a D-Erf and a Newton with a special coating like The T250 Solar Newton presented here. The coatings were done by MCM Optique in France.
The coated Newton has to be an open truss telescope, but can be lighter because there is no heavy D-Erf. Both need off course to be well collimated. In the end the coated version may be cheaper than the D-Erf Newton.
Did you do a star test to test if the collimation and the quality of the mirror is ok?

Same aperture, just a different mirror, and much cheaper to boot!

Ultimately if a newtonian with special coatings, or dealuminized could be used for 393nm, 430nm, 656nm (and maybe a few other interesting lines) without a big heavy expensive D-ERF, I would go that route as would everyone else I'm sure! I already have the D-ERF, so I'm just experimenting with different scope options. My dream scope for it would be a 200mm refractor (istar-optical), but the size, weight and cost are out of my reach at the moment (including the new mount to carry it). But, I can manage 200mm SCT & reflectors at least in the mean time.

For uniquely a white light instrument, a dealuminized mirror would be great. But when adding 393nm in the 1~3A range and 656nm in the sub-angstrom range, the transmission is too low to support those. So that's where a D-ERF comes in, to allow those frequencies without grinding transmission down on them all.

I did collimate and everything looked good. I did not get to do a star test though (real star) due to weather. I've had this thing out one morning (this session) and it's rained and been clouded over ever since. I do plan on inspecting it on a real star as soon as I get a night without clouds. There's a nasty storm system just sitting on Florida right now. But, I think I suspect it's collimated and will test well, judging by how it handled white light and managed clear, sharp convection cells and the subtle detail in the sunspot. I got that first. Then the seeing went south and when I tried HA with the Quark, same image scale even, same wavelength even, it was a hot mess and the seeing never recovered. So I will be of course trying it again next chance I get. I'm sure I can get a wee bit better collimated once pointed at a real star. But again, the white light capture seems to show that it's collimated well enough for most application.

Good luck with the testing. Curious how well it operates in CaK. Should be better than the C8.