After a 2 week stretch of mostly cloudy skies with a few clear days that I couldn't image mixed in, we had a crystal clear sky all day yesterday. The clear skies came at the cost of the coldest "day" of the winter so far, with the thermometer hanging around -16C while I was imaging. It could be worse...the Province of Newfoundland was hit with 70cm of snow and 130km/h winds yesterday...the cold wasn't so bad

The activity has waned a bit this week, but there were still the remains of the Cycle 24 activity is approaching the western limb, as well a several filaments and small proms. Imaging was a bit of a challenge as the seeing was terrible in the cold, but most of the clips turned out well enough. The proms were the most challenging with the longer exposures being affected most by the seeing.

The first image is full disk composite of separate disk and limb exposures taken through the LS80T/DSII/B1200Ha solar scope and the ZWO 1600MM camera: 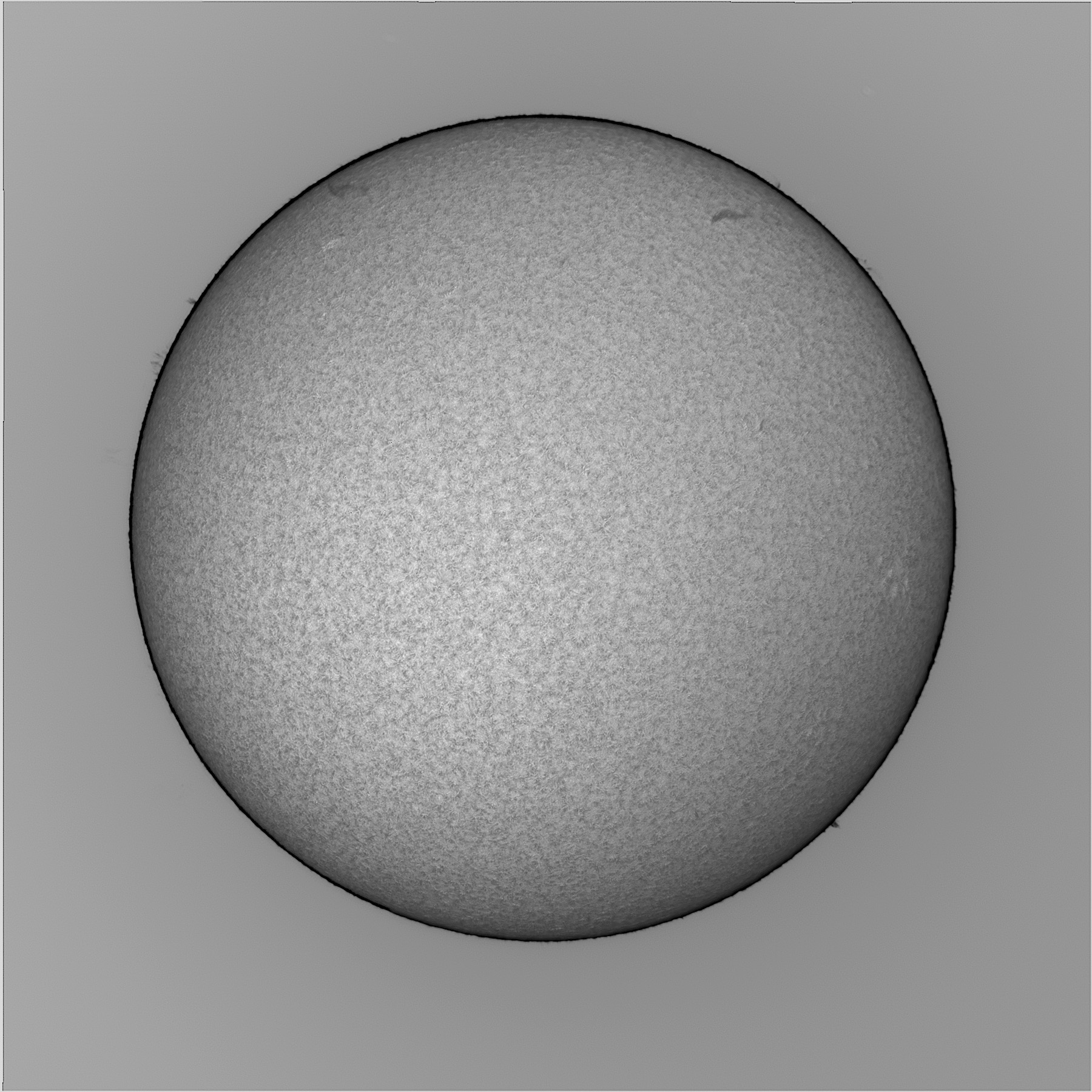 I used the modded CR-150/DSII/B1200Ha scope to try to get some higher resolution images with the ZWO 174MM camera and 3x focal extender. Results were OK with the shorter exposures, and the image below is a 4 frame mosaic of the 'active' region approaching the western limb: 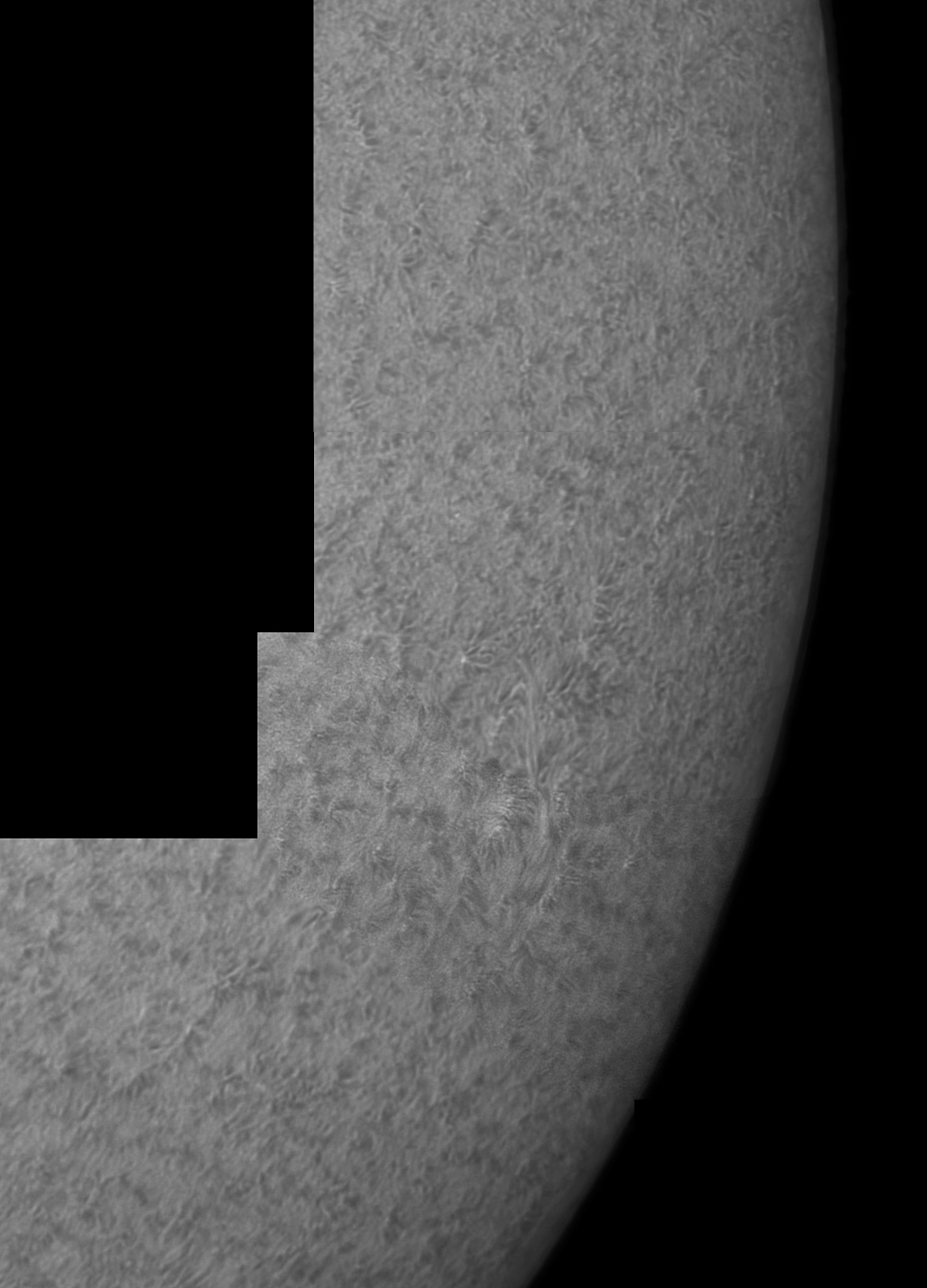 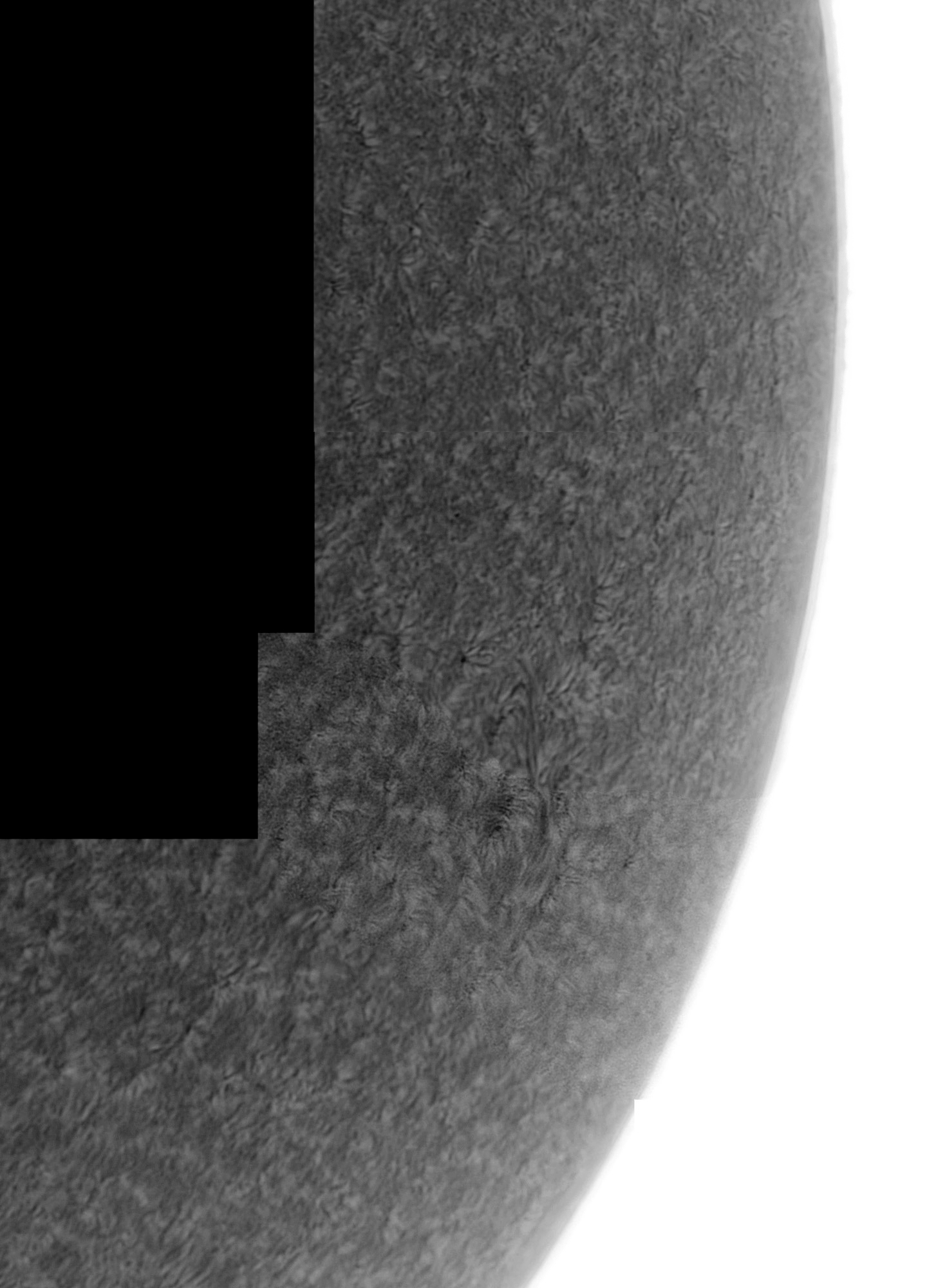 The filament near the NW limb looked much better at shorter focal lengths. Also, adjusting the pressure tuner on the DSII was a bit of a challenge since it was -20C the night before and the tuning knob was very difficult to turn so this could have played an effect. The prom images are not the best, but these two are the better of the lot: There were some features that I noticed along the equatorial regions, but they did not have a lot of contrast and the tuning limits resulted in no usable images thorough the modded scope. I tried to image through the LS80T/DSII scope with the 3x focal-extender to see if they would show up better in the double stacked scope. These features did show up this way and I used the ZWO1600MM camera for this image which covered the width of the disk without having to mosaic:

I was nice to get out under the sun again...we are having a mini version of the big snow storm the East Coast had yesterday, but only 1/4 the snow and wind in our forecast

Lovely images and many good experiments with different cameras, Brian. I am very impressed that you are imaging at these low temperatures: it says a lot on how passionate you are about this !

Great job and thank you for the views: it was snowing here today, a couple of inches. No sunny weather in sight for the next week.

Thanks for your comments on the session Franco...much appreciated

Astronomy in the cold, day or night, makes for its challenges but little different than growing up on a farm and having to work in the weather no matter what. I'd loose about 50% of the year if I wait for warm weather and need to take advantage of the clear skies nay time I can

Tomorrow (Sunday) will be a cleanup day...snow drifted waist deep across the driveway and I'm sure there is snow to clean up in the dome too. Hopefully you don't get too much in your yard to clean up

Very good and interesting your images.

Nice images though, Brian. The mosaic shot of the AR looks particulary good, especially given the conditions.
Top

I'm feeling the cold just thinking about it, Brian. You're a brave man.....

Nice images. It's a real pity there isn't much activity (again) other than a few little proms and a filament or two.

Nice set of images Brian in challenging conditions. Looks like you got a cycle 25 bright point at the 10 o'clock position on the full disk.

Thanks for your feedback on this session, always appreciated

Jochen, the -16C on Thursday isn't a typical winter daytime high...-5 or-6 or more typical. Even that makes most feel cold though

The coldest day I ever did any solar imaging was -26C (one day last winter), and that was a cold session at the scope

Some great images Brian, you really are brave to image at such temperatures but in a way I do envy your snow, I do like snow

Today we have very thick fog all day, I can barely see the bird feeders from the conservatory at the moment. We are also having a record breaking high pressure. On my gauge it is reading 1048mb and it is supposed to get higher towards midnight, I will be keeping my eye on it. It is certainly the highest I have seen, although the record for the UK was 1053mb in 1902, we will see what midnight brings.

Thanks for your comments on the images...always appreciated

Alexandra, I set up a weather station the first of the new year so I now have the full set of meteorological data compared to the manual temp/rainfall recording I have been keeping for over 20 years. I have been bookmarking other private weather stations and saw that the webcam feed from a site in Goostrey shows the big disk at Jodrell Bank and I saw the fog this morning. If you don't have to drive anywhere it would be a good day to stay home!

I didn't get as much drifting with the blowing snow as I though we might yesterday...wind direction worked in my favour. It still took two hours this morning to blow the snow and clear the diveway and access to the observatories and wood pile. The blowing snow last night kept us in, but a scotch by the fire kept me warm

Brian:
Thanks for sharing your work.
I could never stand those temperatures

Thanks for your feed back guys, its always appreciated