Hi Sun-Gazers,
At last some Sunshine today has allowed initially some CAK images.

Your choice as to which is your preference - thanks ??? 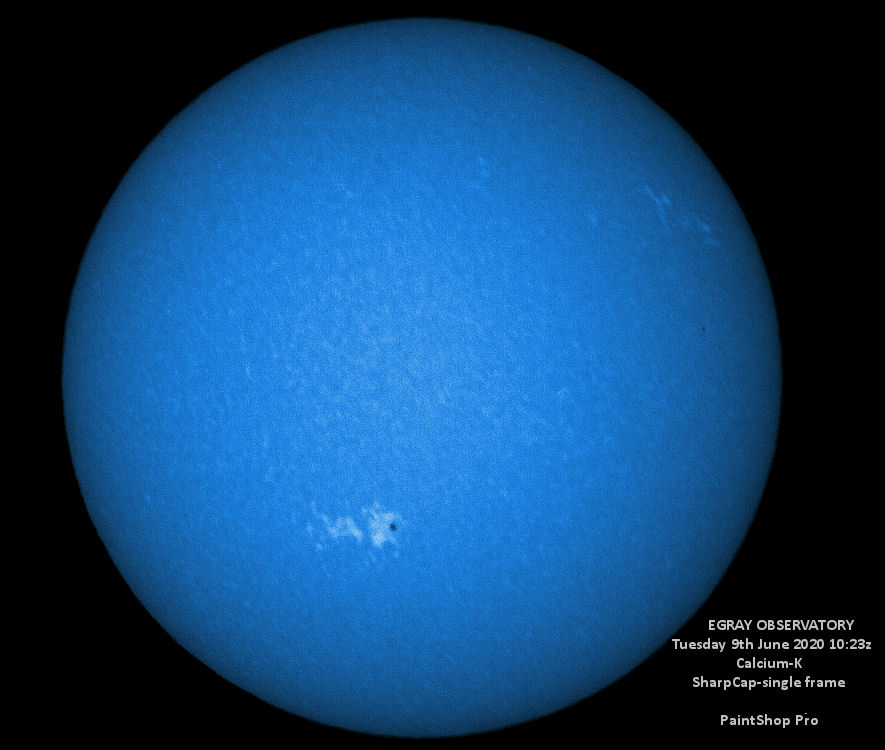 The only Ha image requires further work about those Newton Rings and the WL images are not worth showing. 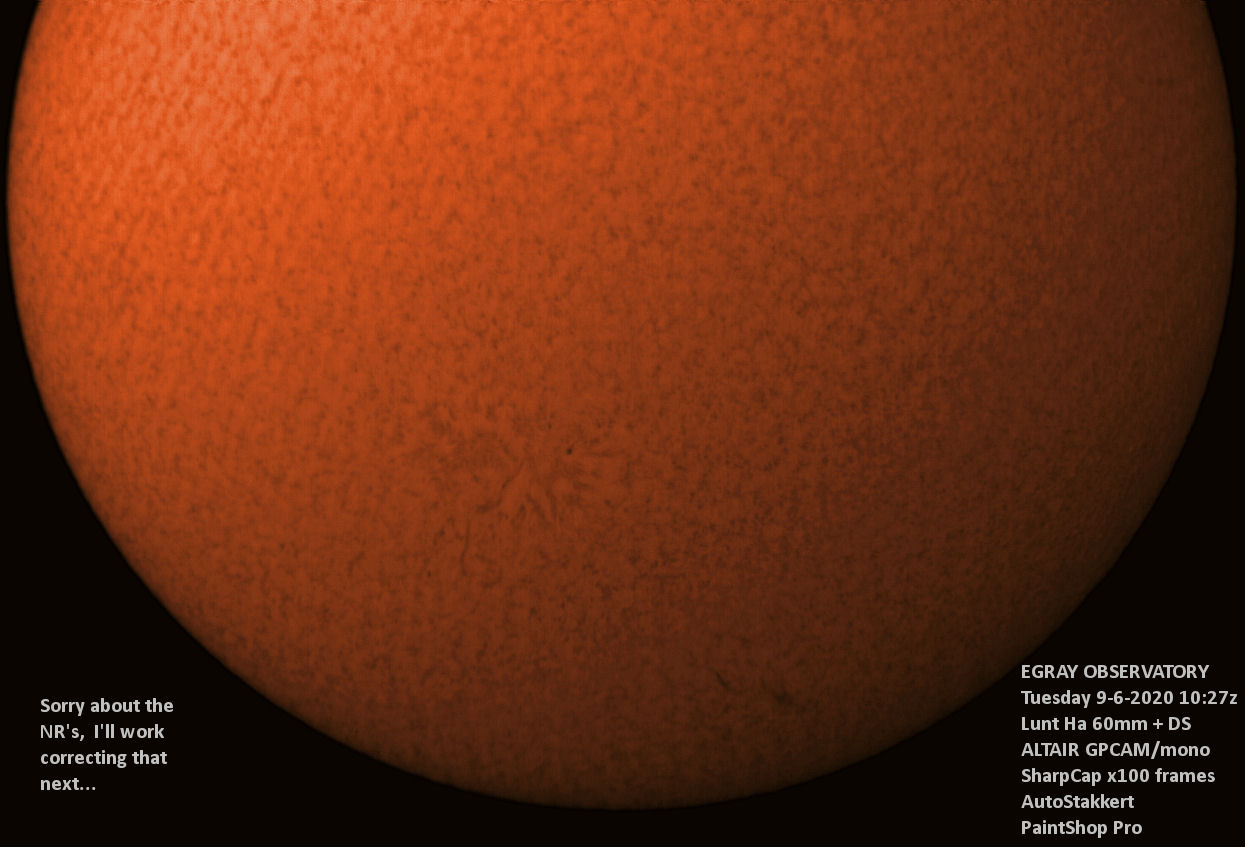 Got some banding in the Ca also. Not sure how to handle that.

Thanks Dan, if there is some NR in the Cak images, I can't see that and nothing can be done to rectify it.

Terry not NR's, banding. Look at the second image, lots of vertical lines going through the image. I think it is a camera issue. I had that just once and not since, strange.

OK Dan. Thanks for that useful info and have just copied the web-images to the desktop and can see what you mean.
It is probably due to sharpening the image and will certainly keep an eye on that in future.

Hi Terry
good full disk images for today's weather
Those pesky NRs again, have you tried unscrewing the front camera window I had this problem on my QHY5 M, almost the same camera.
I suspect the window has no AR coating or not a very good coating so causing the NRs. I just removed it when imaging the sun then put it back after, it just unscrews, both cameras could be using the same supplier or both cameras are made by the same manufactures.
Also the vertical lines appear with the QHY5 m and in EZ capture there is a setting to remove them but it does slow the capture down quite a bit.

I hope this could be usefull Rod

Thank you Rod for that suggestion, which I'll certainly try for the next occasion's imaging.

The weird thing is that on images taken around two years ago and more, there was no sign of these problems, with the only change to the system being a change of pc being used. Although I doubt whether the replaced pc is this particular cause, it certainly does have its' own problems, apart from being a Win-10 machine compared to the previous Win 8.1 which was doing a good job.

Certainly, as you suggest the reflection of that window could well be the cause, so easy enough to check...

The front camera windows are usually AR coated nowadays. My ASI 174 and ASI 1600 are both AR coated.
The window to to far from the sensor chip to cause NR. These are generated by interference between the sensor cover plate and the chip itself.

Thank you also Merlin66, which will prove itself by removing the sensor's cover-window to see the results. Best when there is sufficient blue-skies to
image before, during and after to confirm the problem's location.

Also with three cameras on the tri-scopes it does need a decent weather-clearance, which is not likely (much) until after this weekend.

These are fabulous Terry

I would say I prefer the first CaK picture not because of the colour but because the plage area is not burned out. I do like the blue though

Thank you Alexandra and the first one does seem better too, but as were taken in not the best conditions yesterday, my experience with Cak imaging can be better...

Thanks Eric - even though the session could have been longer + with more Ha and WL images, if North Sea clouds had headed elsewhere. Today, it's the turn of the French and the English Channel to bombard us with even more of both the white and wet stuff...

Terry,
I'd be interested to hear your results with the front AR window removed. (I've tried this previously)
The sensor cover plate cannot be removed from the chip. The thickness of this cover and the design of the chip contribute to the Newton Rings.

Thank you Merlin66 for the ongoing interest and certainly will add those comments to the Ha imaging when the current bad weather passes - which might take a few days and possibly after the weekend too...

As I actually have three Altair GPCAM's in use (2-mono, 1-colour) they will all be tried out by removing the front lens-cover and also change the two
mono's used for Ha and Cal-k around with each other, to see if any improvements might result.

Ideally, I need a very good day with much time without clouds to perform these tasks, so they can be compared without interruption, but that is probably being a little too hopeful. Shame these snags didn't show up a few weeks ago, when we had continuous daily Sun-shine and no clouds at all - all day long for several weeks... Oh Well, patience is a virtue...

I prefer the single-frame capture (first image) as it has more details and less saturated areas. Did you use any barlow for the HA image? Tilt adjuster works for my case. Have fun learning about your equipment as you resolve it.

No Barlow used for this image, as have already experienced problems using one causing more NR's and still work to do about that on Ha. The apparent larger-view of the disk is due to cropping-out the outer areas.

Tilting has already been trialled with no affect - as yet.

Will certainly be working on removing the camera's front windows and various other trials and no doubt will keep you updated as to the results - as and when this pesky weather decides to clear away (after the weekend at least)...

Hi Terry
Just wondering what tilter you actually tried on the cameras.
On my opticstar camera the circuit board with the chip on it is mounted by four screws in the corners sitting on spacers.
What I did was remove two spacers on opposite corners then used those two screws to tilt the board and chip inside the camera, that worked a treat and keeps the chip central to the optical path unlike external tilters.
I have a feeling the NRs are always there (without the tilter) and they are like a background noise so depending on the day you can have a high signal to noise ratio so do not pull out the NRs when processing the image, when you have a low signal to noise the harsher processing makes the NRs visible. That is why some days we don't need to tilt the camera or chip and other days we do.

Thanks again Rod.
I used a very basic tilt of the camera itself by hand whilst watching the effects on the new large screen, with no apparent changes to speak-of and
obviously having to adjust the focus accordingly.

With the Altair GPCAM's, I don't recall seeing any screws around the chip PCB boards, but will certainly look at those tomorrow for the possibility of
trying your resolved issue.

I understand your last comments, which does make sense, albeit to overcome the NR at source using SharpCap may be needing to be looked at.

I am also looking at using Altair's own Capture Software to see if any difference there, but ultimately a couple of years ago, using exactly the same set-up, cameras and software, I'm fairly certain that no NR's were captured, so will also delve into the archives and look at the various images taken previously.

Until I have a decent clear-sky period when I need enough time to try out the various suggestions, otherwise I will have to resort to seeing if the 1,000watt studio-lamp might give enough light output to allow me to try-out the options... OK for WL but probably not for Ha...!!!

The chip is part of the pcb and no screws available, so not an option with these cams.

Good suggestions guys and thanks.

Next stage (weather permitting) will be to look more closely at the LS60 with and without the DS to see if all working properly and rechecking both Etelons - whilst viewing the live-screen-shots, as well as with EP's......