I saw the ISS today, first time I had a transit for a few years. Today was the best weather of the week with sunshine forecast which was a miracle too. It was 50/50 though as there was lots of passing clouds. I remember thinking, if Stuart can have luck, can I have some please, and I did. Clouds cleared off for 5 minutes during the transit

It really does make you smile (well run round the garden like a lunatic). 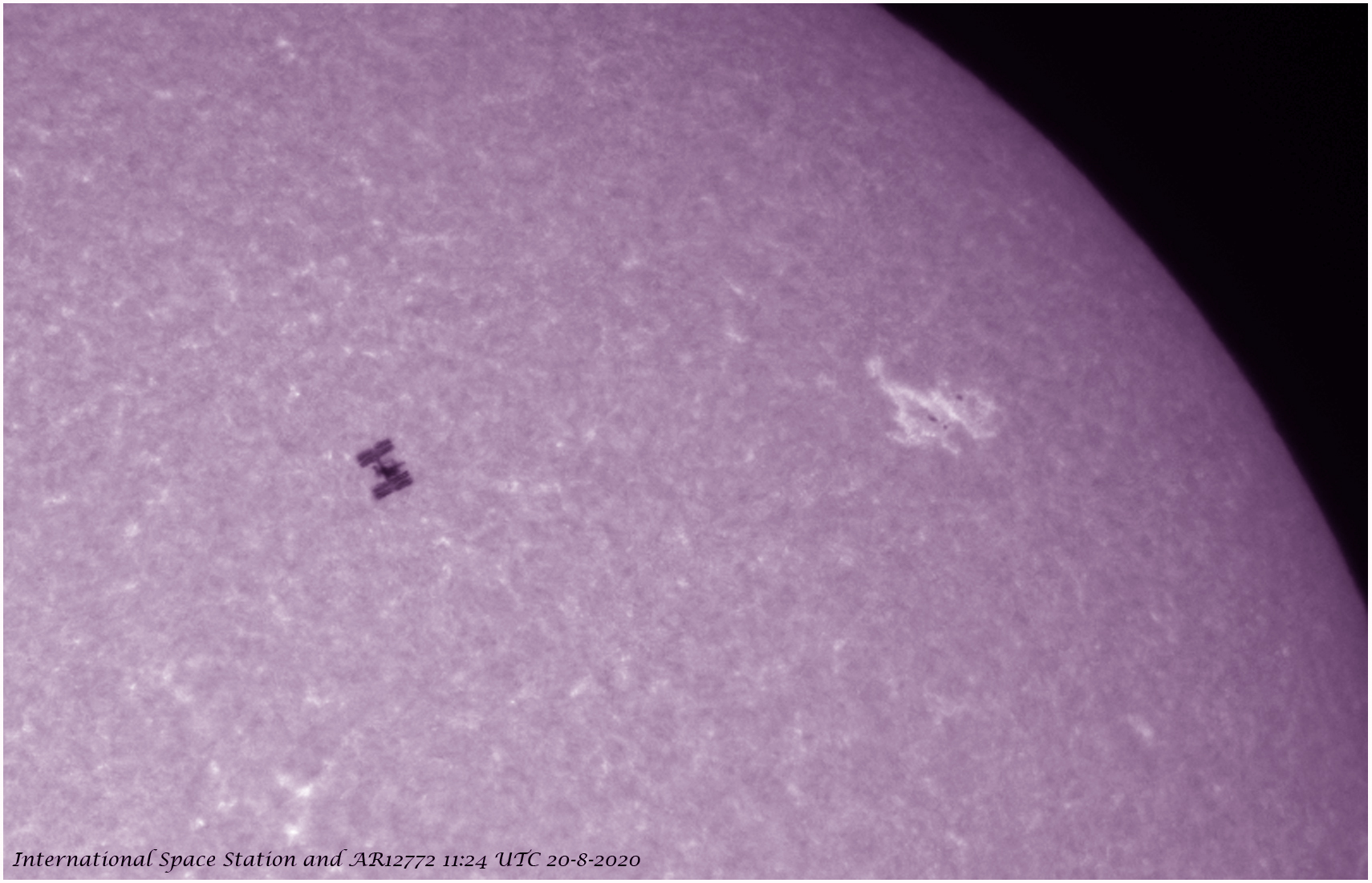 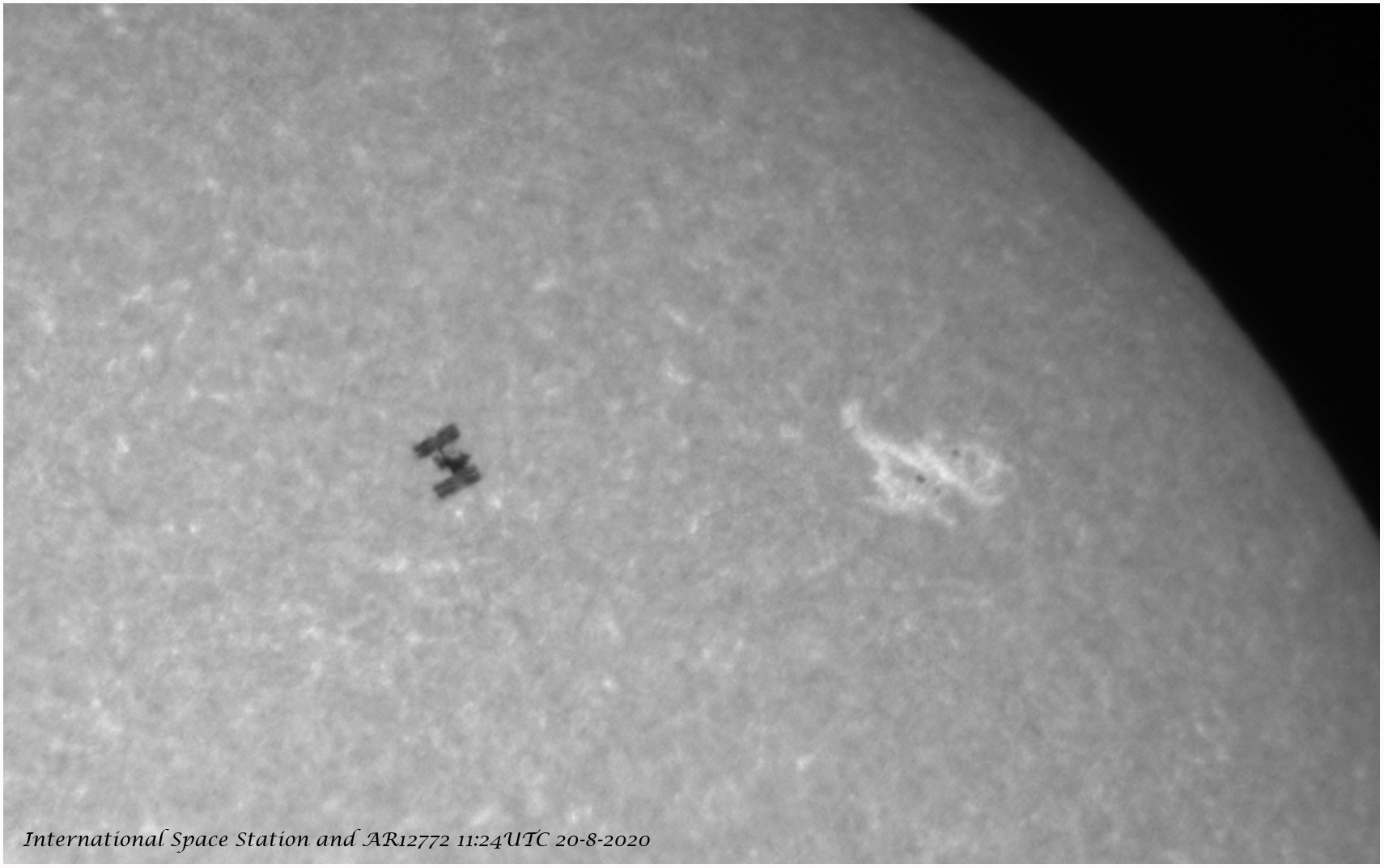 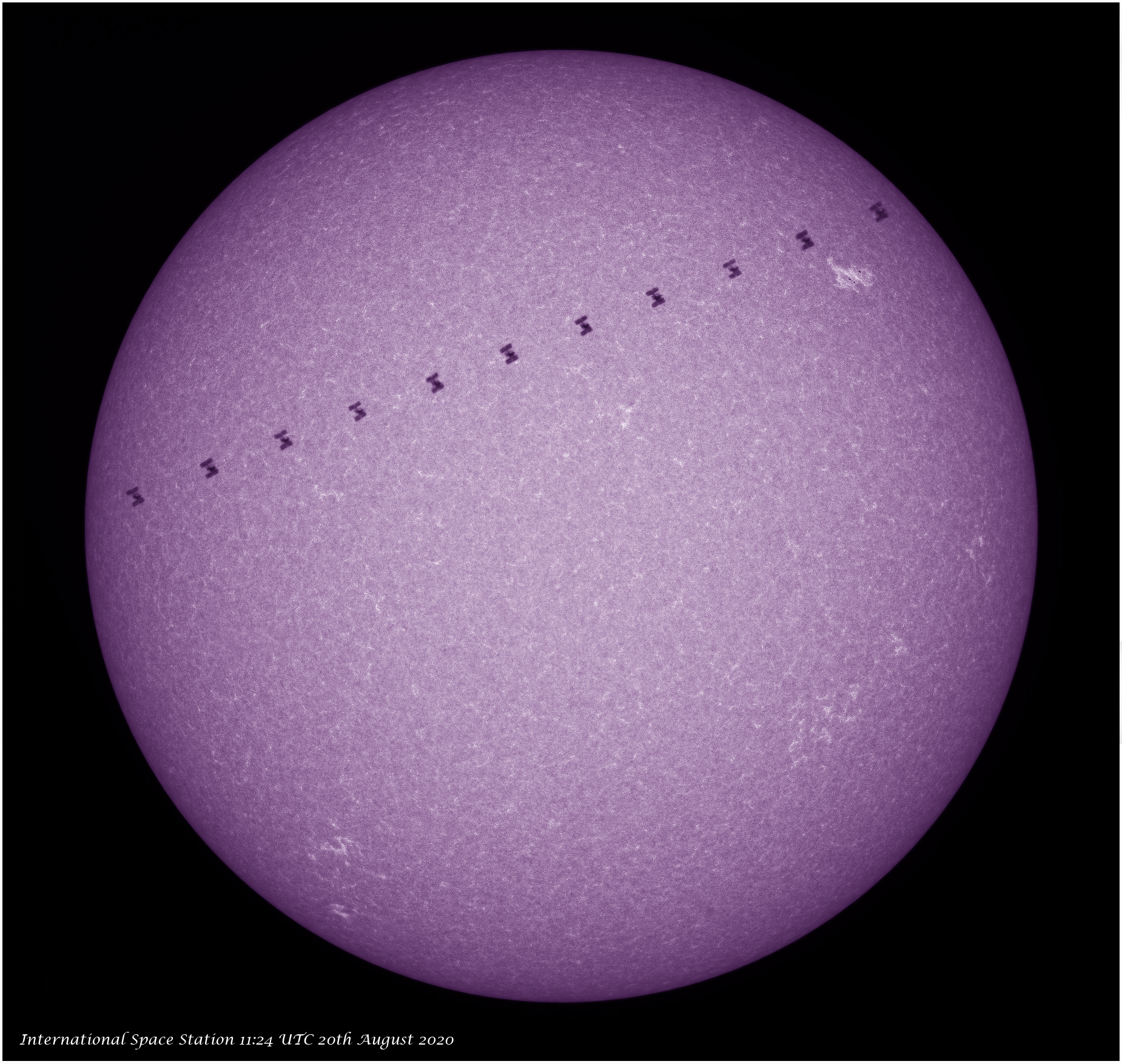 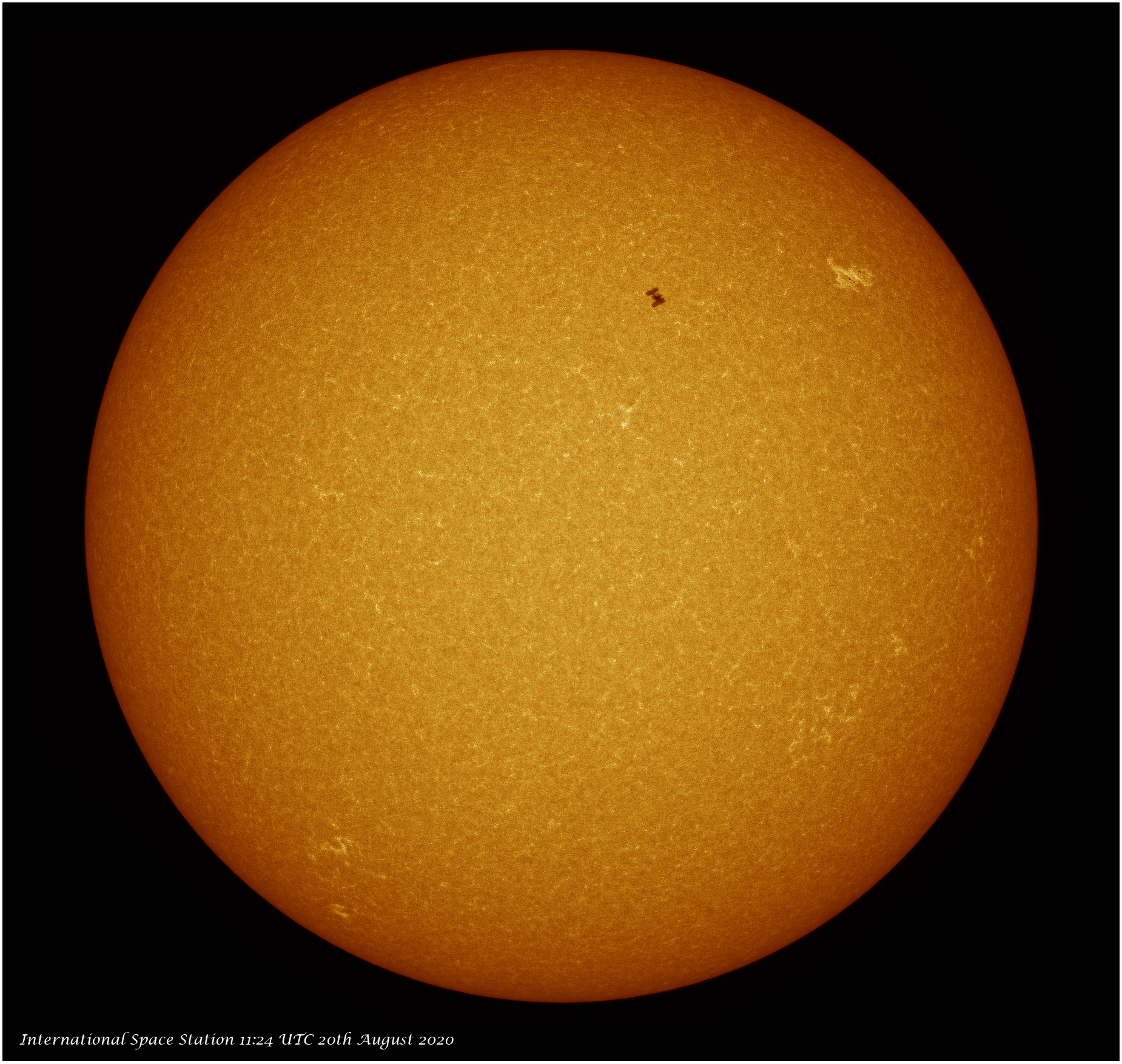 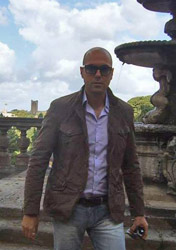 It’s great when everything comes together. I’m so pleased for you, Alexandra.

Woohoo!!! And you got to see the Sun too!

Selection of Solar and Deep Sky images on Flickr: https://www.flickr.com/photos/mikegarbett/

My I ask your frame rate?

alexhuangyan
Oh, I get it now!

That's a good one Alexandra.
Luck is usually the major factor for these events. (Needs to be one, low passagge, weather needs to be good ...)
Do yo have some info on the shutter speed you used. Since it is CAK probably you couldn't use the shortest exposure, but still remarkable sharp.

Was it by chance or did you plan for it?

That's great, Alexandra. You must be well pleased!

Lovely detail in the captures as well.

Thanks everyone! it was very lucky indeed

Rusted the frame rate is a mystery to me. Technically the ASI174 can do 128fps in avi and 60fps at 16bit ser. On the old computer this was always the same. On the new computer however I don't believe anything, for the last 3 weeks I have never been able to get more than 40fps on 16 bit ser, yesterday it was saying it was doing 80fps, I don't believe anything FireCapture says, I am sure it was doing 60fps which is it's max?

Alfred, yes it was planned, I had a Calsky alert a few days before in my email. I then checked Calsky again on the day as orbits can change and it was the same, so I knew it was coming for 0.7 seconds at 11:24 .11 seconds

Paul the exposure time was 0.614ms

if you recorded in SER format, the player will report the framerate the file was recorded.
If I look at the size & speed (in '/min) for that transit, I would say everything above 40fps the ISS image will be overlapping from one frame to the next. (80fps probably half the ISS size)

You intrigued me, I had a look at the Firecapture log and its says 81fps (don't believe it for a minute). So I counted the frames with the ISS on and I get 57 frames. So for 0.7 second with 57 frames that is 81 fps!! Well, ZWO says it can only do 60fps in ser, so that is weird.

well the speeds have nothing to do with AVI orr SER. The camera just deliver a "raw" image to the sofware, and the software decides how to convert it/write to file ... Usually the speeds drops to half the speed when you change to 16 bit (and AVI can't do 16bit, SER can)

Theoretical speed for the camera are

(10 bit ADC is used when you set high-speed mode in FireCapture) Those speeds are between camera and software in GOOD conditions: fast usb and usblimit set to 100. That might cause problems when bandwith of USB is not good enough, so sometimes you need to reduce that, but then get lower framerate.

Second parameter is when capturing. Software needs to write the frames to disk, so if that is not fat enough, frames will be dropped and framerate goes down.

In 16 bir camera is sending twice as much data per frame, so framerate goes down.

Why FC reports these strange framerates I don't know. Never seen anything strange with my cams.

Thanks Paul, these limits are correct 128fps at 8 bit AVI and 62fps at 16 bit ser exactly as specified when I bought it (at full frame rate) and this is what the old computer achieved. The new computer I couldn't get anymore than 40fps in Firecapture in 16bit ser except for yesterday when it achieved 81 fps at 16 bit full frame. I have absolutely no idea what is going on. I still can't get Firecapture 2.7 to run even with Torsten's fixes. I will be stuck on 2.6 forever

Have you tried Genika? You can try without the camera registered in the licence file, it will work but you won't be able to use the record function.
If that shows the same problems, then there is something wrong with the ASI Camera driver. (That should install by itseld in latest W10, but you can always dowload the driver and install) Or you could try to install ZWO ASIStudio and see what that gives. (Not all functions from FC but it's not bad)

Alexandra - I DO tend to trust Firecapture - for some things anyway

When I did my ISS capture a few weeks ago, I did exactly the same calculation of number of frames showing the ISS divided by transit time and compared the answer to what was reported by Firecapture. Like you, I found the numbers to agree perfectly - I got a much slower 26fps with the Grasshopper but 13 frames captured during a 0.55s transit were enough to get me smiling too

Its a pity you can't get FC v2.7 working as I find it to be a significant improvement. I had no problems getting it working with the Grasshopper ( it just auto-detected the camera and worked ) or my new ASI290MM. I have read of others having issues with v2.7 and ASI cameras and the suggestion that the problem is using an old version of the ASI SDK - v2.7 apparently needs the new version whereas v2.6 doesn't? If this wasn't part of the 'fixes' from Torsten then it might be worth a try? Others seem to have solved the problem by using the ASCOM drivers but all of my ASI cameras (120MM, 185MC and 290MM) work perfectly with v2.7 and the latest (29th June 2020) ASI SDK (from https://astronomy-imaging-camera.com/software-drivers) on two different laptops.

The other issue I have had on my old imaging computer is that despite running from a folder rather than being 'installed', Firecapture seems to write temporary stuff to various places on the HD which is not cleared when the programme closes unexpectedly. This sometimes means that a full re-boot is needed after, for example, a camera connection failure. If this isn't done then Firecapture often reports that the 'camera can't be started' or some other error. In the past I have spent many unhappy hours swearing at the laptop having connected/disconnected cameras and restarted Firecapture several times to no avail. Eventually in desparation I switched the laptop off...... only to find that everything worked perfectly once it was switched on again.

Unless you have done so recently, it might be worth downloading v2.7 again as I understand some changes to SDKs etc have been made to solve other problems. Sorry if all of this is 'old hat' that you have already done - just trying to help

Selection of Solar and Deep Sky images on Flickr: https://www.flickr.com/photos/mikegarbett/

Does your new computer have an SSD? Or do you have an external SSD?
I'm a complete ignoramus when it comes to modern tech but I believe their speed can be beneficial with high speed cameras.
The little Samsung T5s are extremely useful for carrying lots of data from one computer to another.
External SSDs can provide the capacity often missing from onboard, laptop drives.
But you probably knew this anyway.

Hello Alexandra.
A belated reply to your excellent imagery.

The animation is superb and all lines-of-light images are fab.

The Solar-disk may be fairly quiet, but with much detail of the ISS being seen, makes up for interesting images.