Well at last, I have retrieved the attached Stonyhurst Heliographic from STEREO, after a few days of it being down on their website.

Although a few hours old of today, it does show that in a few days (3) there could/should be an AR approaching the East, with another in the N.E.

Of course, whether either remain active long enough to give us our first (more northern Solar regions) of 2021, is by far not yet certain, but we can live in hope...

It just remains for our weather (wherever) to "play fair" !!! 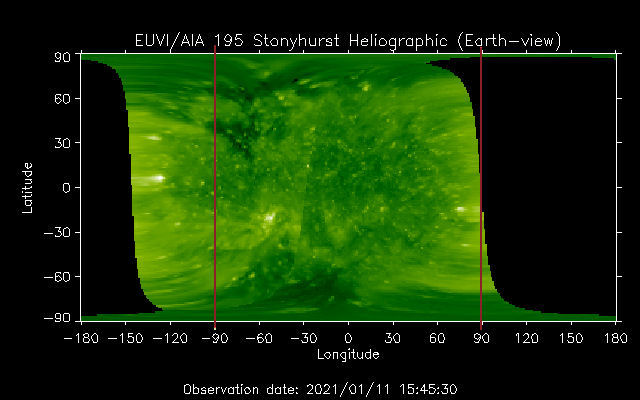 Thanks Eric and yes we can just hope.

Regarding the Stonyhurst Observatory, indeed it is a small part of the Stonyhurst College, which is a fabulously large and very old school/college.
The grounds of the college are also quite interesting and the observatory is at the southern perimeter of the grounds.

Both the observatory and the college have a very interesting history over many centuries - in Lancashire... The school/college itself was established near Hurst Green in around 1794... The observatory itself was built in 1866 and apparently is still in use and for weather-temperature recordings

" The records of temperature, which continue to be taken there, began in 1846 and are among the oldest continuous daily records in the world (the very oldest continuous daily temperature records have been taken at the Old Stockholm Observatory since 1756). In 2004, Stonyhurst replaced Ringway as one of four weather stations used by the Met Office to provide Central England Temperature data (CET); revised urban warming and bias adjustments have since been applied to the Stonyhurst data. "

Thanks for the update Terry!!!

Thanks Terry. I made the mistake of looking what the weather forecast has in store for us earlier - wish I hadn't bothered. Looks like it's going to be virtual sungazing for me for a while!

Thanks Brian, Alexandra and Mark.

We spoke a tad to soon Alexandra, as the STEREO website appears to be down or overloaded at mid-day today, but will try again later. That's a new definition for "pimples" - but I guess good enough as the word "spots" is already taken-up...

Mark, have just looked again at the satellite/cloud imagery and the border-line of the cloud might allow an afternoon-view as the cloud is coming from the NNW for your location, so let's hope you can see "not a lot of activity" on the Sun at least !!

I have just managed to get a Heliograph image by a 'round-about' method via the web, as attached for 1125z today...

One of the pimples approaching the eastern-limb is still looking good for its' AR... Around +36-hours for a limb-view (Thursday)... Terry:
I went to pick my grandkid from the Stonyhurst College last year, he spent a year there. He took me to the old Observatory but it was closed, so here is a photo of me and grankid at the entrance side of the Observatory.
Visited the College and it is an incredible place.
Best regards,
Eric. 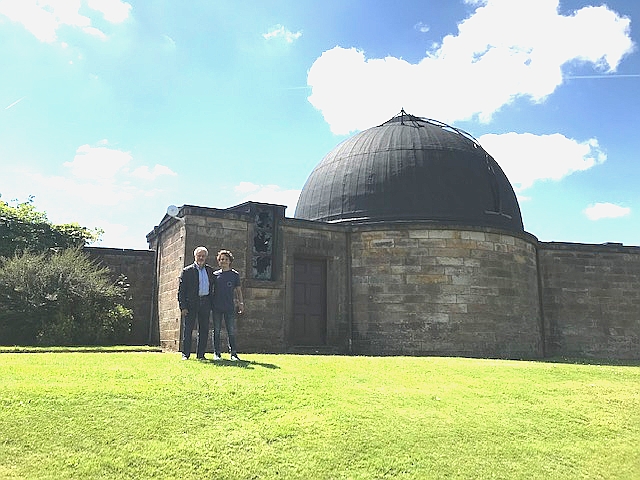 That's an interesting reply Eric and thanks for the photo of the observatory itself.

That's a very long journey for you from Mexico to Lincolnshire...

Yes the college architecture and it's grounds are quite impressive and no doubt many brains emanate from its' teachings and facilities...