At lunchtime yesterday the clouds parted and I had some larger blue holes. So I set up the PSTs on the deck and sat in the sunshine and grabbed an image when I could. The birds were singing, the bees buzzing and the rats frolicking in the sunshine too.
I even set up the Halpha PST for visual which I haven't done for a long time. Now I have changed the blocking filter to a new one the view was amazing, just how I remember it to be. I used to sketch the disc in the old days but in the past few years I could hardly see anything. Yesterday the view was superb and I could see everything on the image only better (in colour). The zoom lens was fab too as I could zoom right into the active regions and not be lost in the darkness. I think sketching on holiday will be coming back soon

The Halpha is very patchy, I had a very bad blending problem 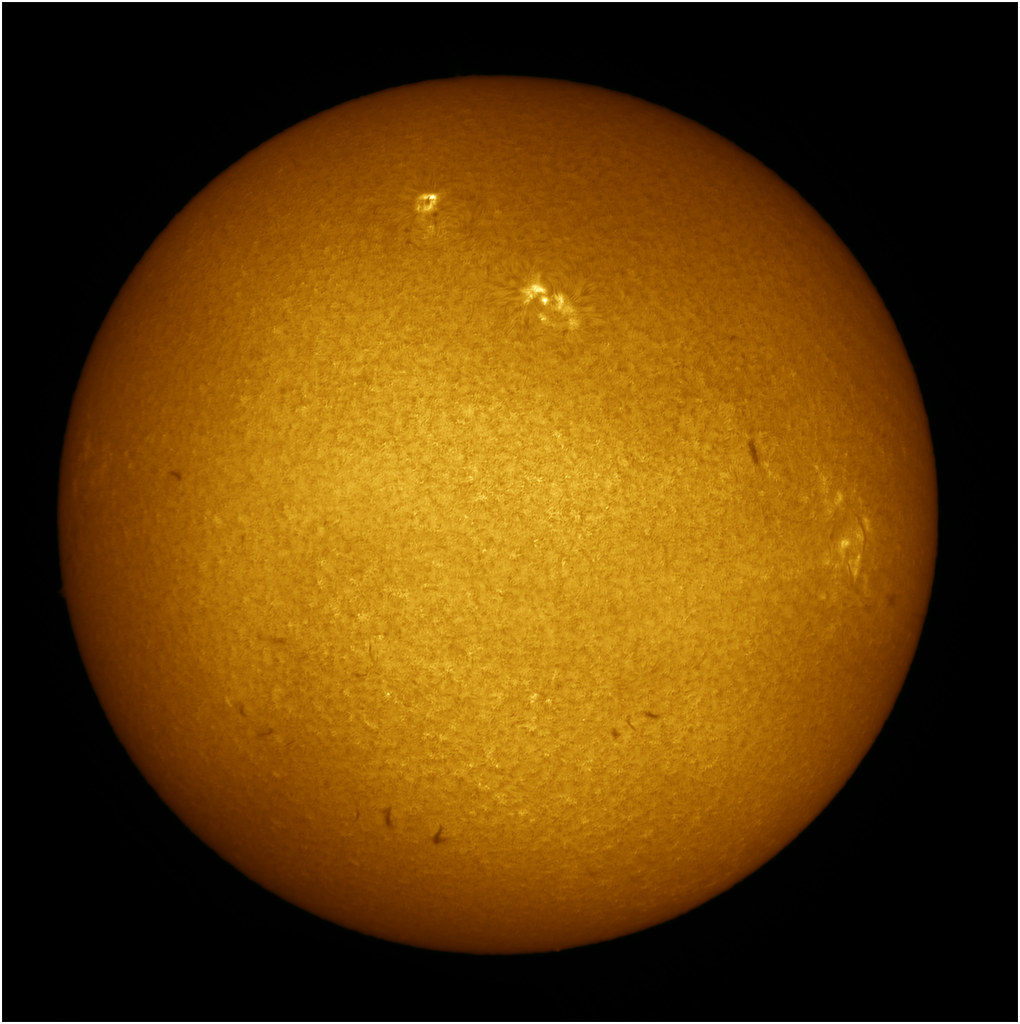 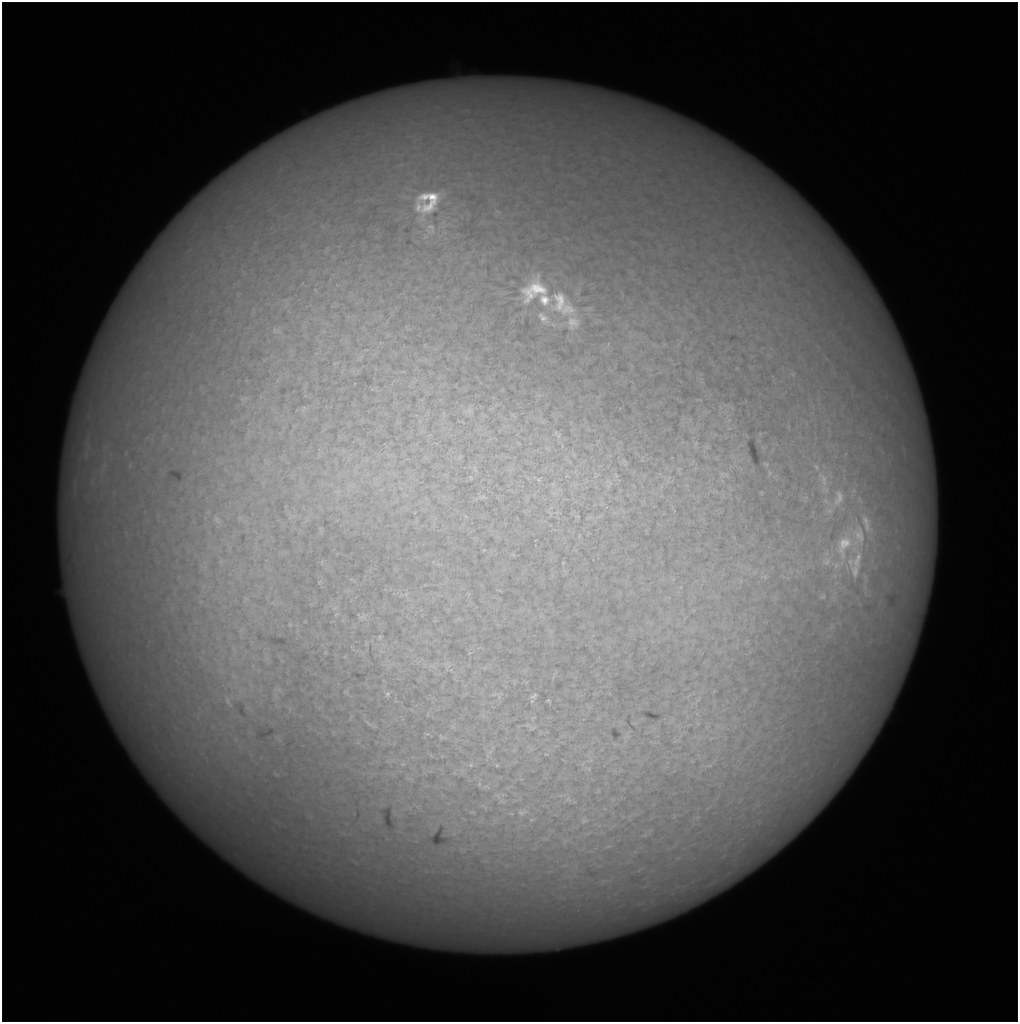 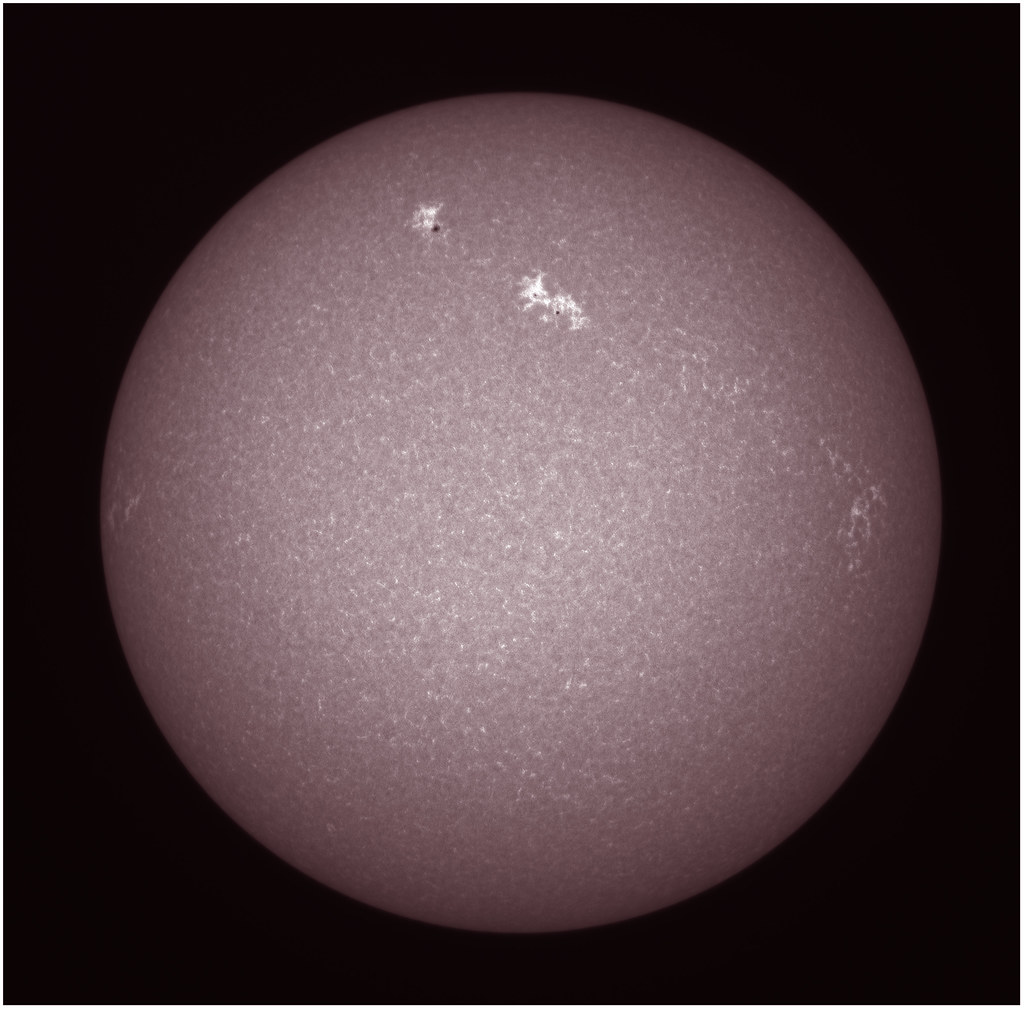 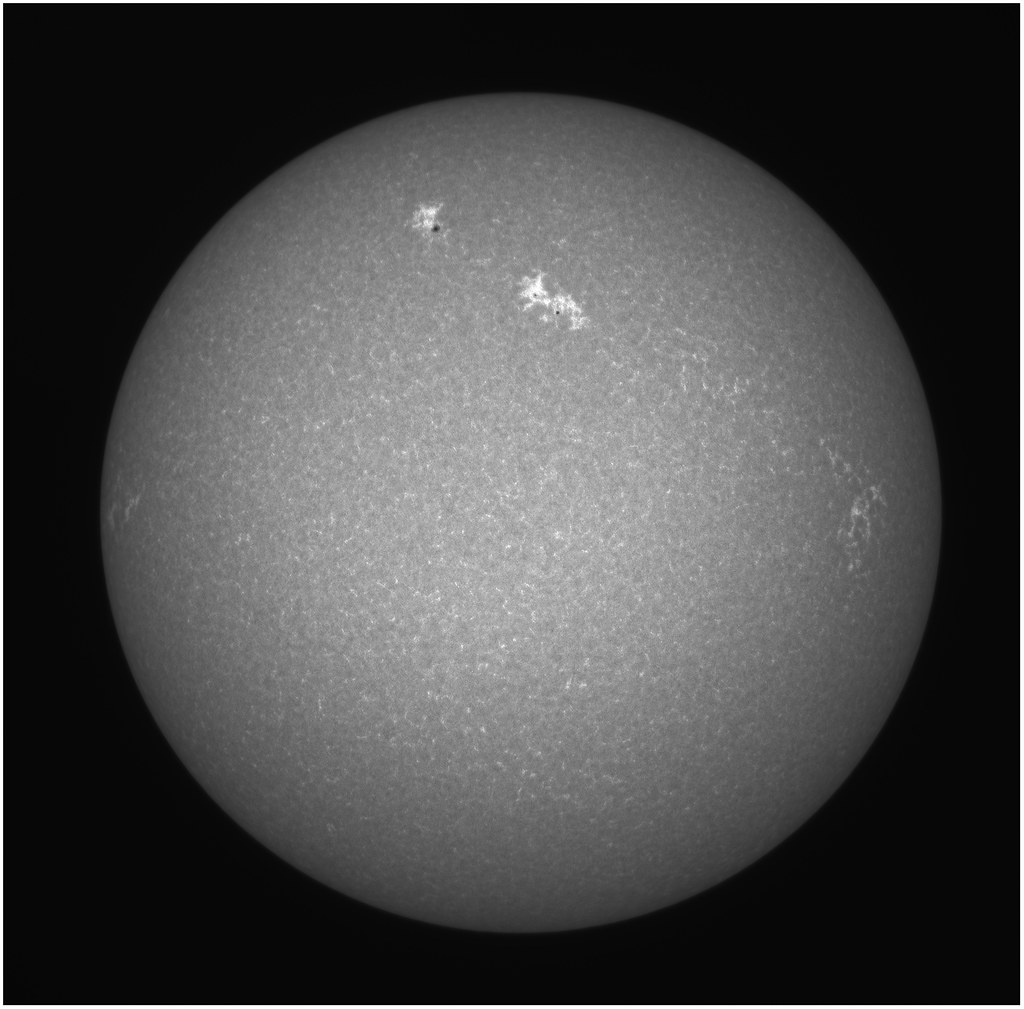 First close up in CaK (2x Barlow) I have been able to take in years!! 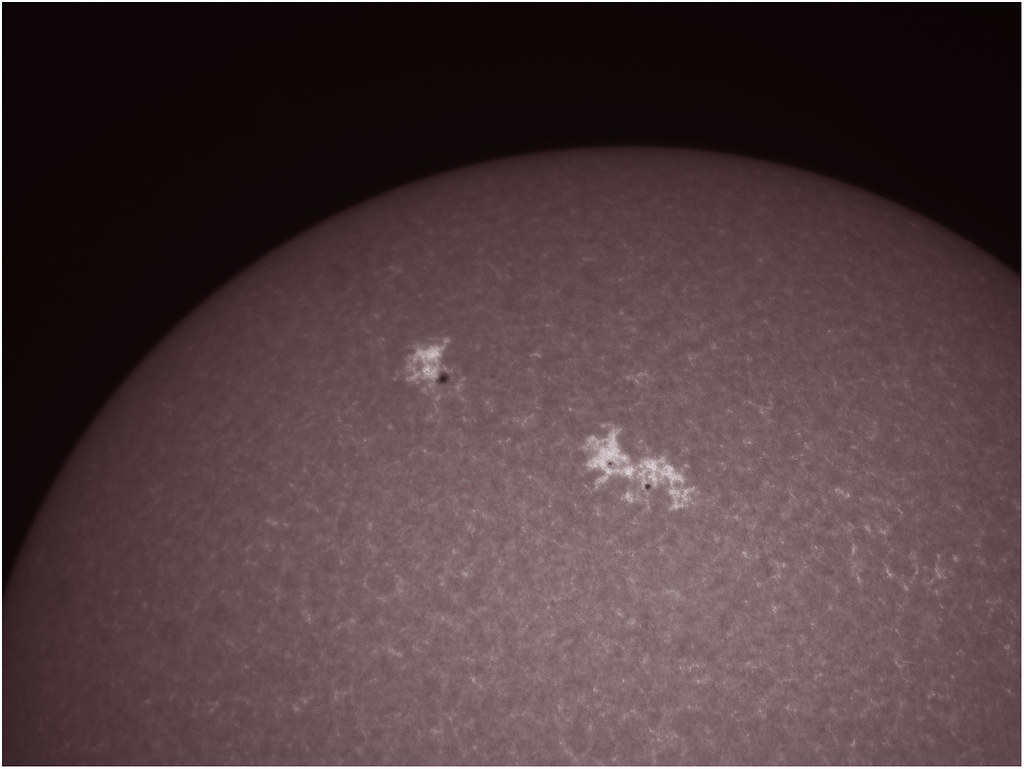 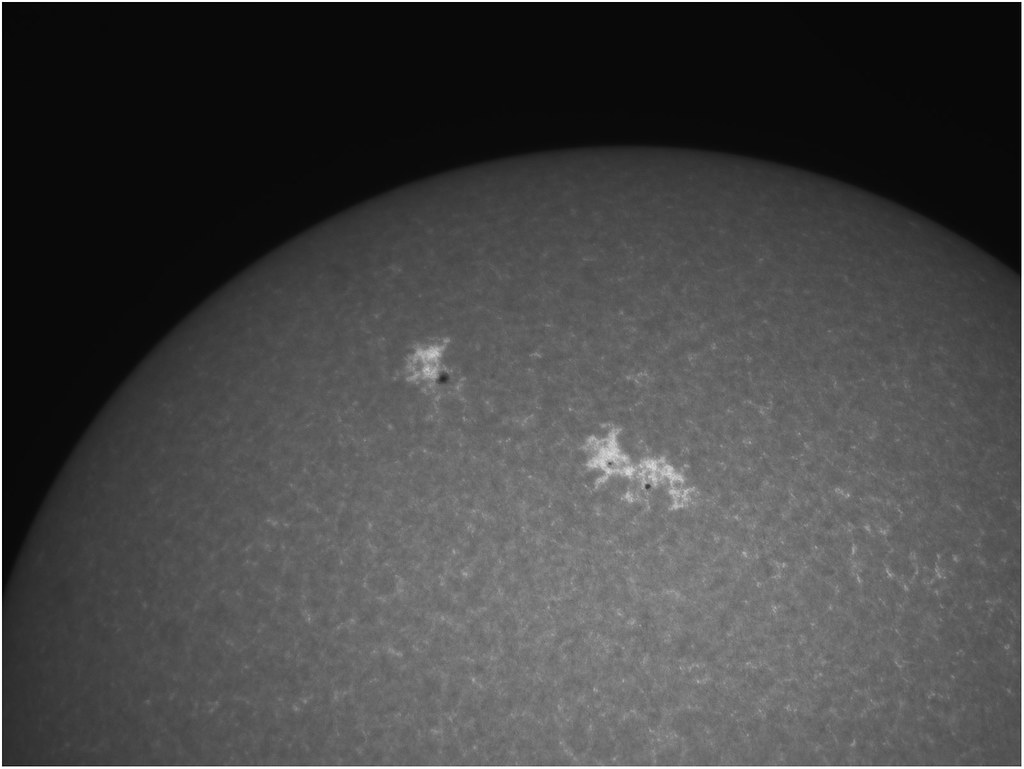 Very nice, Alexandra ! It looks like you had a very serene session in the nature with the sun.

Excellent set of images Alexandra.
All the surface detail has come-out very well.

Thanks for sharing
Terry

Excellent images; the more I look at pictures on this forum, the more I become aware of how much more I have to learn.
Great stuff.

Nice to see you had a break in the clouds and could take advantage of it.

Now you have me wondering...all the wildlife you mention that were in the garden sound like good company. But rats, lol???

Beautiful Work Alexandra. The color you used on the CaK images reminds me of the SDO AIA1700 images which look quite similar. 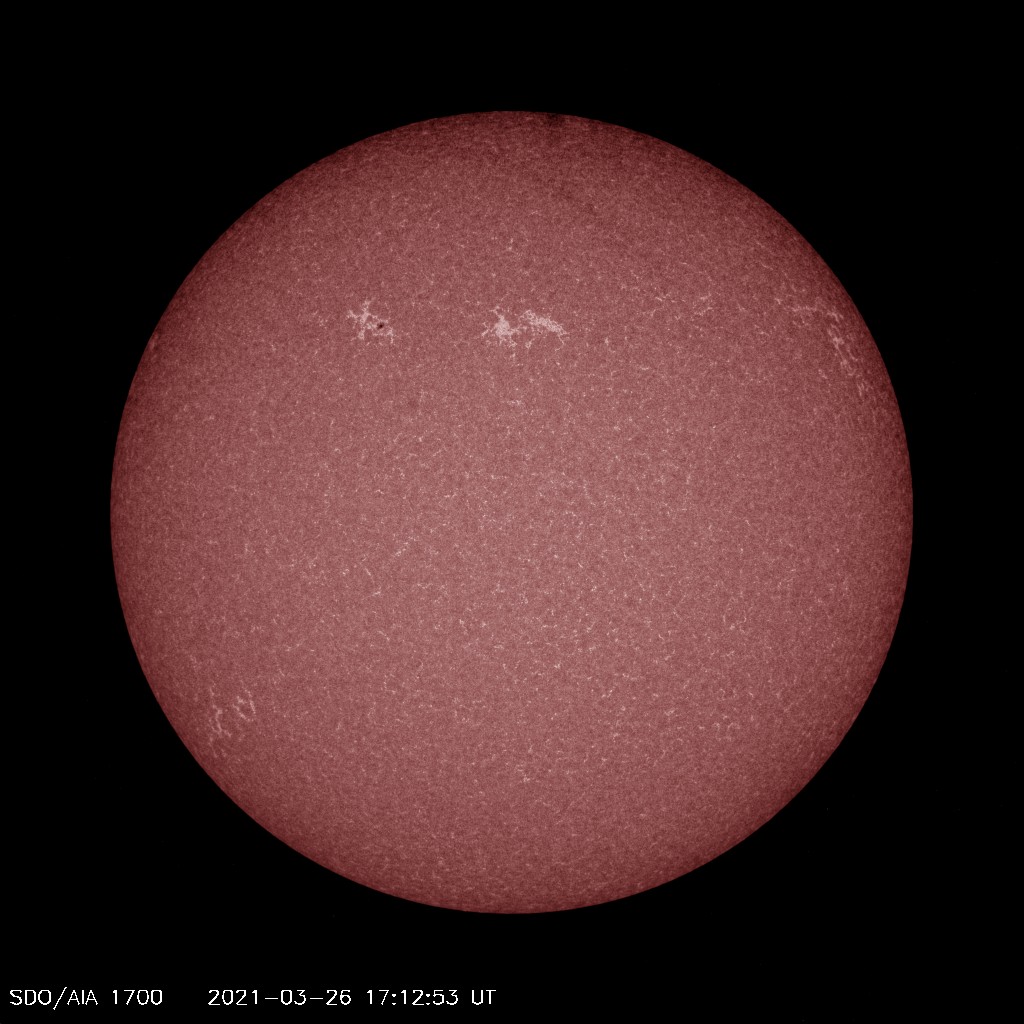 Great set of images, been watching the the activity during the week but being at work not able the fire up the scope myself

Detail is superb as always A1

Waiting for Sol to Rise

Sounds like an idyllic session, Alexandra. That’s what’s so appealing about solar astronomy. There’s nothing better than sitting in beautiful warm sunshine, in the garden with nature all around you.

Glad the views have improved. The results look excellent.

Thanks everyone, it was really relaxing

James the colour is exactly the what you say, although I haven't perfected a descent pink yet, I'm still working on it. I had the colour much better a few years ago

I get fed up with purple

I've lived with the rats under the birds feeders all winter but suddenly their population seems to have exploded and they are out and about all day long. They have started chasing the Wood pigeon, Stock Doves and Blackbirds all round the garden and getting a bit bold. I bought a trap yesterday and hopefully I can start a relocation program going across the river 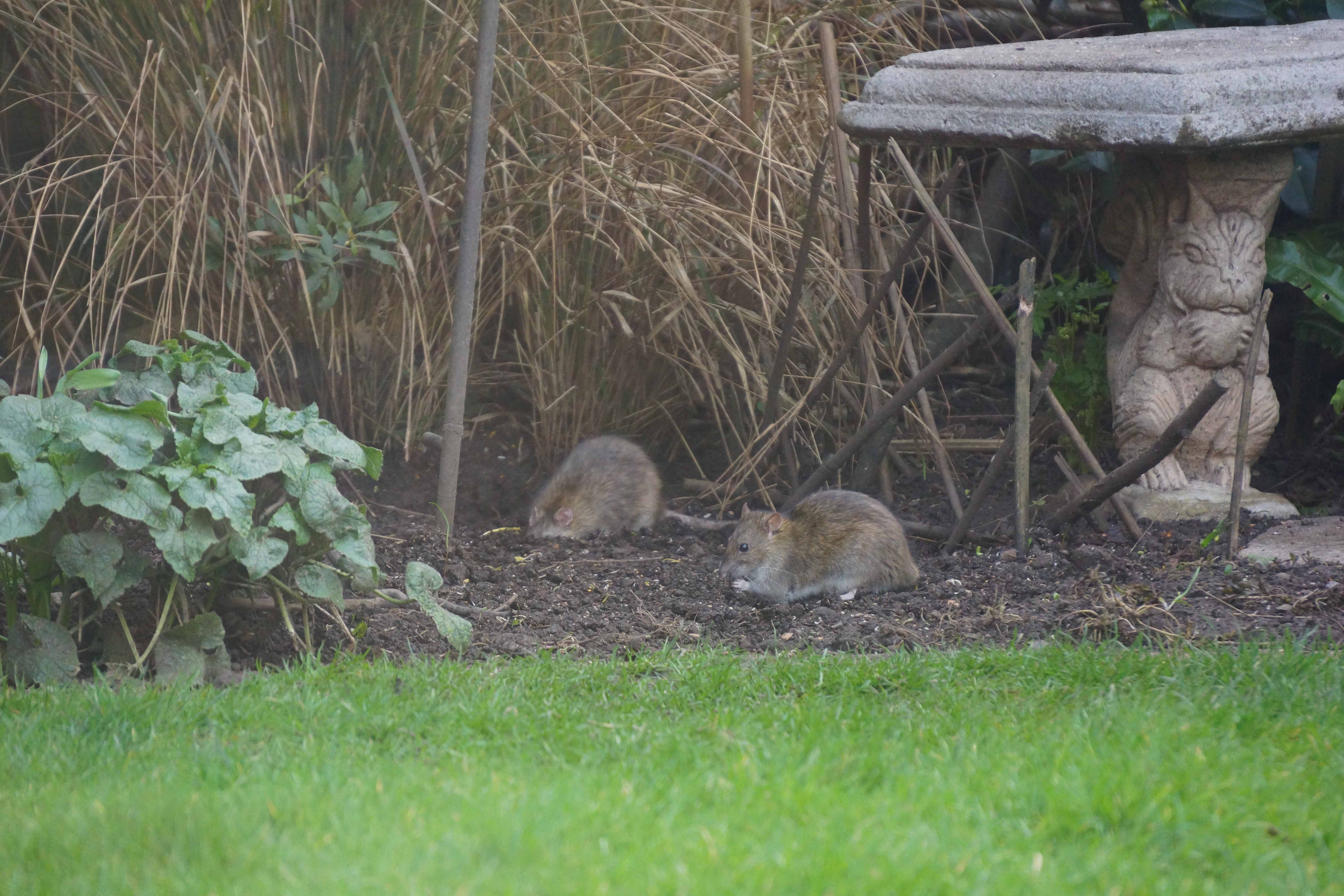 Great set of images Alexandra.
Are these tame rats .... Brrr...

Sounds like you're enjoying springtime! Nice set of images!

Alexandra:
I agree with Stu, it was an idyllic session.
Have a nice weekend.
Eric.

Great images Alexandra! Slow catching up on the forum this weekend. Not sure Mori would like your furry friends, he's not very tolerant of anything smaller than him that he can catch...

Lovely captures Alexandra, great your PST is back in shape again. Rats have no chance in my garden with my two cat's, especially my big Norwegian forest cat, lol. Thanks for sharing. 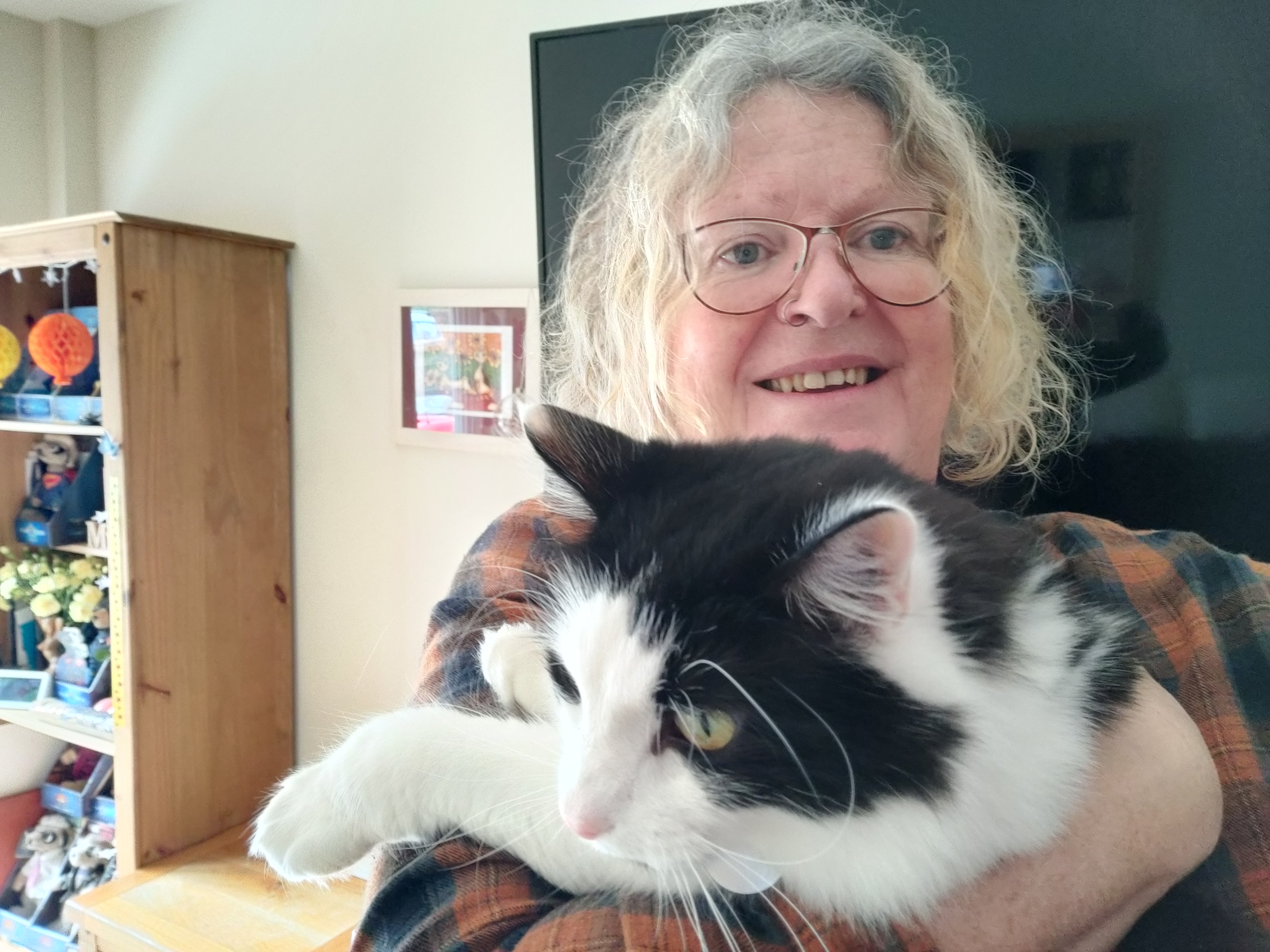 Last summer I was plagued by cats, had an anti cat radar and they still wouldn't go away. I gave up as it also put off the hedgehog and was annoying to my ears as well (but not the cats). Where are the pesky cats now? not a sign of them, I think the rats have chased them away like everything else. No luck in my rat trap yet.

Alexandra
The Brown Rat aka Norway Rat! Around here we call em" " Warf Rats ". My dad had pigs years ago and they had dug tunnels in and around the pig lots. They would get into the rabbit cage and chicken pen and eat their food too and they would attack the weak and younger chickens. They are smart critters too. It takes a good cat to catch and kill them. When I was growing up I would shoot them using BB guns or a 22 rifle and even tried with a bow and arrow.

And yes they are cute! I have Grey Squirrels. Fuzzy tailed Tree Rats!

Outside of getting a cat or a terrier try a rat trap, rat poison or use a carbonated beverage like Coke. It must be fresh when they get it. They can't get rid of the Co2 gas like we can,

and it kills them, blows them up! No, they don't explode

. Only kill them if they are being pests and hurting something. The problem with rats is they reproduce wildly, can be destructive and can carry fleas and disease.

I just noticed you have a rat trap. Is it the kind that kills them or a live capture trap?

My big black Maine Coon cat Salem catches rats and everything else! They would not have it easy with him around.

Thanks James,
They aren't harming anyone as they are at the bottom of the garden, however they are starting to chase the birds so they can keep the food for themselves which is sad for the doves and pigeons. I bought a cage humane trap so I can relocate them down by the river (and hope they aren't homing pigeons). I have also stopped putting bird food on the floor. I haven't caught one yet, they are too clever. I would never use poison as it is a cruel and slow death and it also contaminates the food chain and dangerous to hedgehogs and pets. The coke idea also seems cruel, I have seen videos of students who have swallowed liquid nitrogen for a laugh, it isn't pretty

but he has a tendency for Magpies rather than rats

Thanks for posting again the full disc images again with your PST ?
I thought you had a DSF-100 solarscope ? I once thought about buying a DSF-100 solarscope but was put off by the price !!
I wondered if you just had the 100mm front etalon from www.solarscope.co.uk, and then fit a suitable blocking filter ? and you have your own refractor of choice ?

Maybe second hand ones would be more affordable for me ?
I am working hard and saving up for a DSF-100 solarscope !!

I do still have the Solarscope DSF100, it is front mounted on to my TEC140. They come with blocking filters, 2 in fact, one which is brighter to allow the same amount of light transmission when using the double stack compared to the single stack. This is so that you remove the annoyance that double stack images are darker, this is not the case with Solarscope, they are still just as bright and just as glorious in single stack or double stack.

The problem is that over winter the Sun doesn't touch down in my garden so using it is very difficult. In February I can start imaging again but on Friday the Sun was so fleeting there wasn't the time, it was easier to plonk the PSTs on the deck and image in 10 minutes. I go with what is possible

Thanks Alexandra,
That's good to know. Very clever to have 2 different filters like that. Hopefully, I will own a DSF filter, maybe a smaller size one !
There is some better weather this week, so get ready for daytime solar imaging !!

Alexandra,
As long as they are not hurting anything then I would not bother them. And they certainly are clever. I have seen that first hand. I certainly appreciate your compassion for animals.

I just got through imaging. Wish me luck.