Bank holiday Monday dawned cold, windy and with snow showers, but there was a clear sky following the southerly plunging weather front and an arctic air-mass that followed. Seeing was not forecast to be good at all; 4-5" on MeteoBlue and this was confirmed when the view on the laptop screen looked posterized, even using 40mm aperture and 2x2 binning on the camera.

I decided on a day CaK modding and did some experiments comparing DS and TS CaK, after several hours today i'm leaning very much to the idea that the gain in contrast is not worth the increase in exposure time and gain. So, I decided to put my attentions to maximising the results from the DS configuration. First of all stripping all the components of the filter train back, making sure all filter edges were light tight using gaskets and changing some filter spacings (quite easy as is a modular construction).Perhaps my biggest change was when I realised there was sag in the module, as this is a 1.25" tubing, that then sits in a 1.25" to 2" adapter and then in this in the scopes focuser, there was play with the module in the 1.25"-2" holder that caused sag, however changing for a clicklock adapter rectified this. The front CaK filter being perfectly orthogonal to the optical path seems to be a key factor. The second CaK filter is sat in a sky bender that allows tilt, and this tilting shows some interesting things. As it is tilted the image brightness slightly decreases and at the minimum brightness shows maximum contrast ( this could be easily seen on the values on auto gain changing, go past this minimum brightness point and contrast gets lower and image brightness increases. I believe what is happening is the CWL of the filter is passing over the K3 line.

With a 3rd CaK filter in place it is just harder to achieve this, and as a result is harder to see the spicules, and get this maximum contrast effect. It's a bit like 3 external Ha etalons - too many variables! I tried changing the order of the CaK filters, but this seems to have no noticeable effect, I had wondered if it would be like with Ha, but maybe because they are significantly wider band pass this is of much lesser effect? I have a few more things I want to explore tomorrow...

Anyway, MeteoBlue had the seeing 'improving' to around 2.5" by 3pm so I decided to give it a go with the 60mm f16. It wasn't good enough to resolve the chromospheric fringe, more of a 'fuzz' around the limb today, but it did give a half decent view, not much done to this apart from USM in ImPPG. 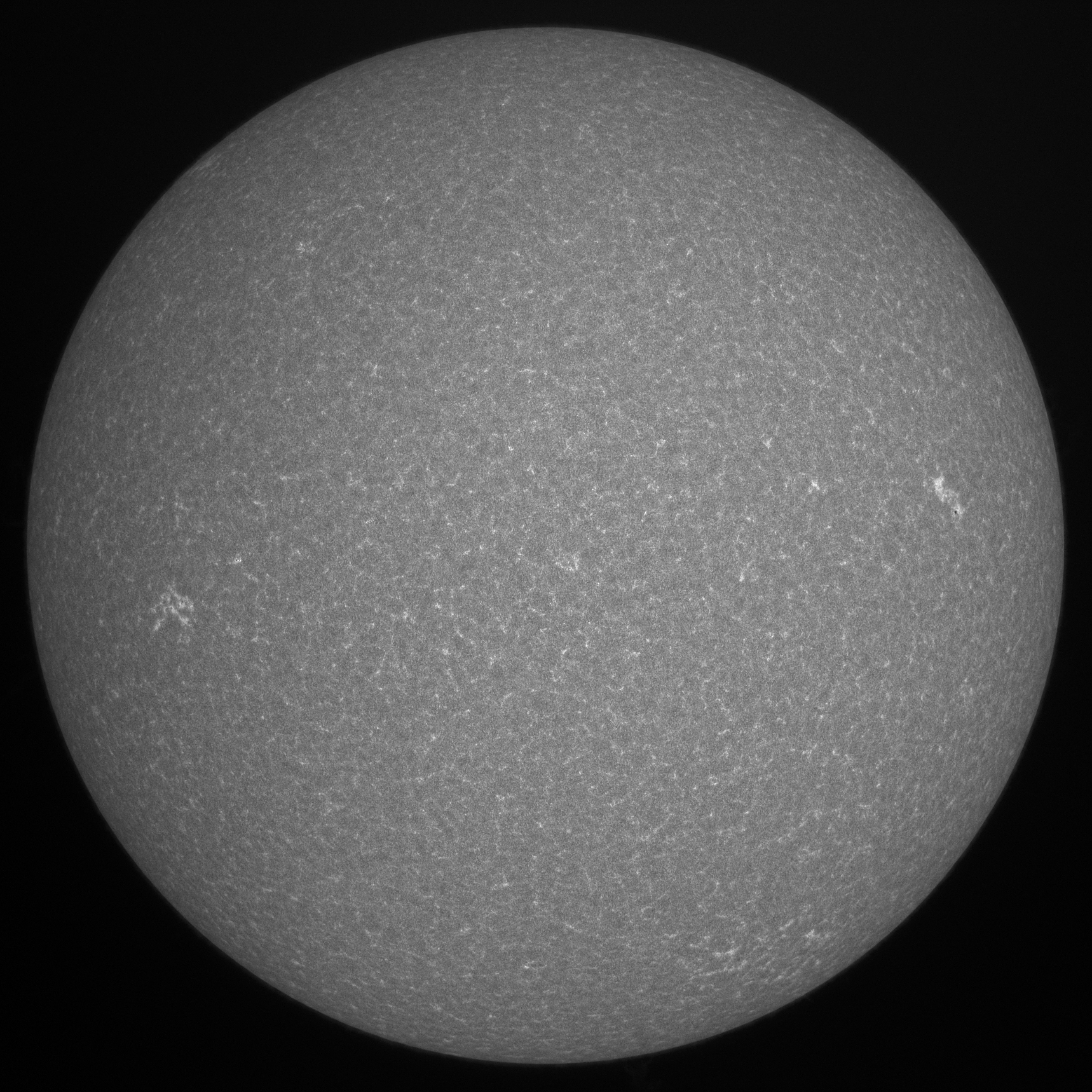 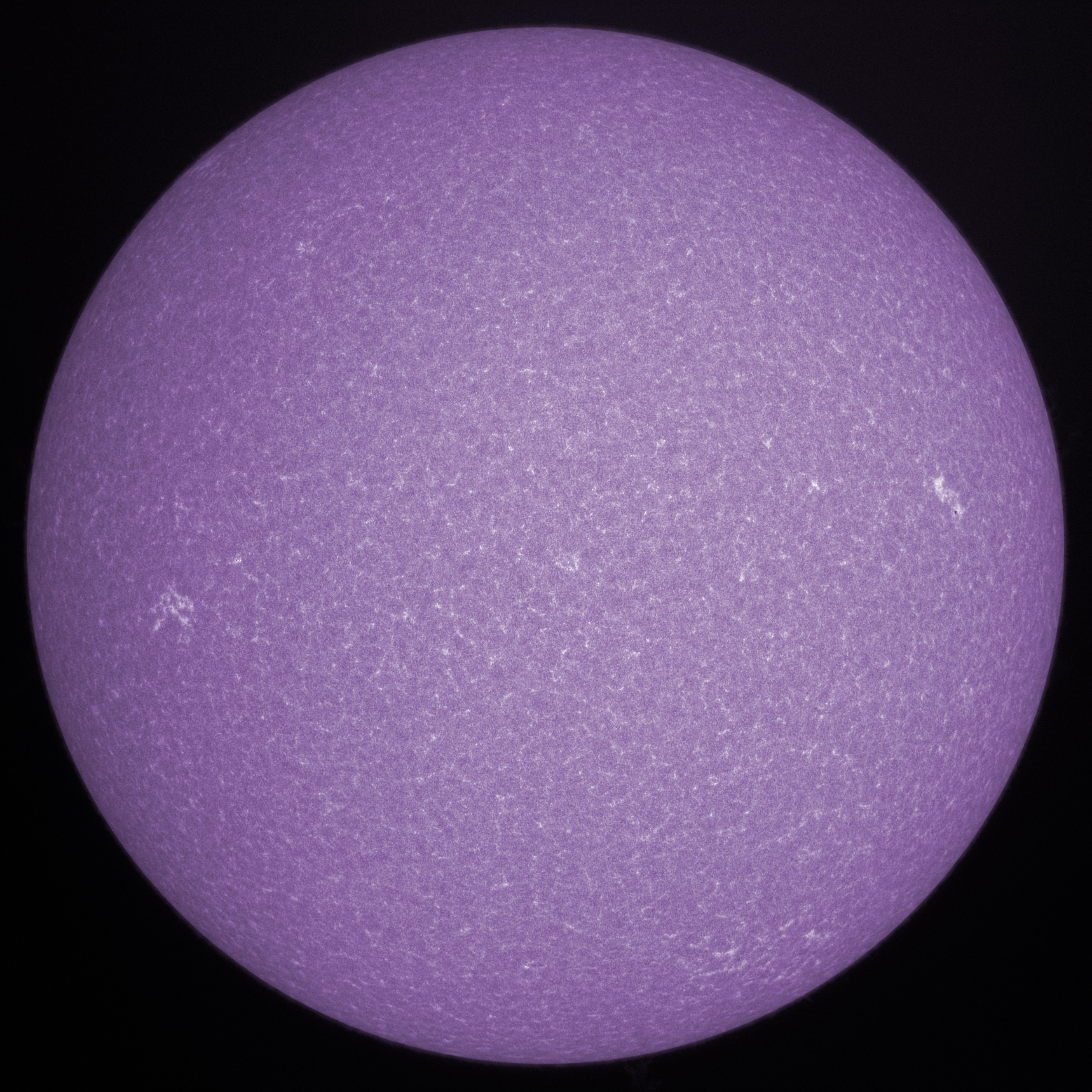 More to explore tomorrow, clear skies forecast again, and better seeing than today, I don't think i'll be getting the big guns out but experiments can continue at the smaller apertures.

They are pretty-good Mark, compared to mine at present with my Lunt-60 Cak. With the two images, unusually I think the un-coloured is better..

Lovely Mark, looks good despite the seeing. Not sure what mine will come out like. I did see several proms in cak today as well.

Mark:
Nice images.
It is interesting to make experiments in an imaging session, sometimes one does not get results as wished, but one always learns and gets to know well the equipment.
Best wishes,
Eric.

Thanks everyone. I reckon the seeing was maybe a shade below 2" when this image was captured (or at least the fleeting moments of better seeing were this), I know I can get more detail out at 60mm aperture when seeing is below 1.5". Today is allegedly slightly better than yesterdays, just finishing my breakfast coffee and then going out to see the state of play.

Good luck, Mark. I hope the conditions meet your expectations.

Excellent to hear about your tinkering, very interesting and lovely shots as well

I have never really seen a fuzzy fringe or proms with my Lunt wedge.

Thanks Alexandra and Stu! Just processing some data now...