14May2019 Spectroheliograms: A Sunspot Study

I LOVE finding out about different ways to appreciate the Sun and light in general. Use this forum to post your info or questions about various outside the mainstream ways to appreciate our life giving star!
Post Reply
7 posts • Page 1 of 1

14May2019 Spectroheliograms: A Sunspot Study

Here is a study of the sunspot / active region visible on 14May2019. Image from http://www.solen.info/solar/ My study is carried out in the 6300 angstrom spectral region where there are two magnetically sensitive Fe lines. Part of the interest here was to map out the magnetic field configuration in the active region. Here are calibrated, rectified (divided by the continuum) spectra taken in the quiescent disk and in the active region. 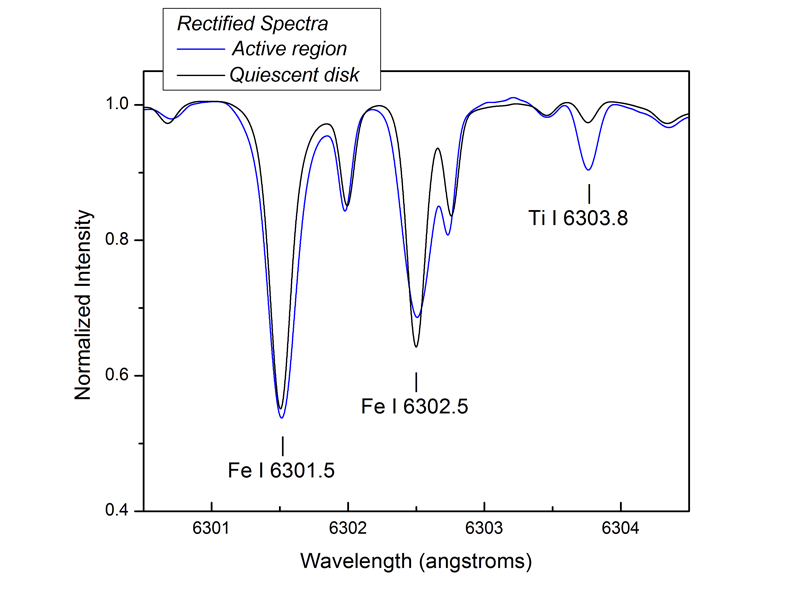 You can see that the active and quiescent region spectra are quite different, notably in the linewidths of the two Fe lines. The line broadening is due to the magnetic sensitivity of these lines. The field actually splits the lines into a triplet of lines, unresolved with my instrument, and the separation in wavelength of the outer pair of the triplet is proportional to the field strength. The stronger, unmarked lines are telluric water vapour lines which partially blend with the Fe lines (at my spectral resolution). I've also "discovered" a Ti line in this region which darkens considerably in the sunspot region. Some internet research revealed that the Ti 6304 line is called an "umbral" line, strongest in sunspot umbrae.

I've been developing a method of constructing spectroheliograms which takes advantage of as much of the spectral information as possible in a given video frame. Most often, spectroheliograms are generated by acquiring a video of the spectrum as the Sun sweeps past the entrance slit of the spectrometer. A narrow spectral slice is extracted from each video frame and assembled (concatenated) to produce the final spectroheliogram. I've expanded the technique a little to make full use of the spectrum available in each video frame. The figure below shows one video frame and an associated spectrum plot made at one horizontal location in the frame. The dispersion direction is vertical and the horizontal direction traverses some portion of the solar disk. Each location along the horizontal axis in the frame offers its own spectrum, one of which has been plotted. 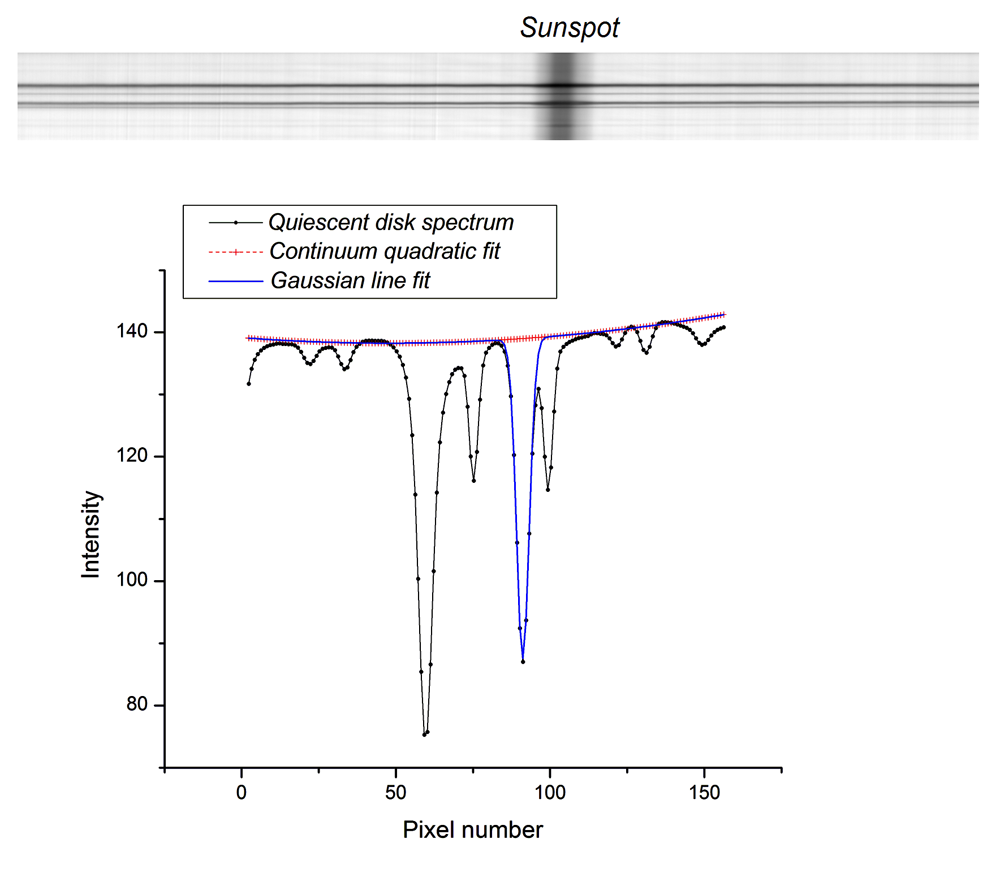 If we are interested in the behaviour of a particular absorption line then there are really four parameters to examine: the continuum ("underneath" the line), the line depth, the line centre location and the linewidth. I have written some computer code (in Liberty Basic) which extracts these four parameters at each horizontal location in the video frame. It also handles the presence of blend lines which can be subtracted from the region containing the line of interest. Each video frame is then reduced to a single column of pixels representing the behaviour of one of the four spectral parameters across the solar disk and giving one slice of the final spectroheliogram. This is done for each of the parameters of interest. When these pixel columns are concatenated, a final "spectroheliogram" is generated corresponding to a continuum image, a line depth image (conventional spectroheliogram), a line shift image (shift with respect to some nominal line centre location) and a linewidth image. 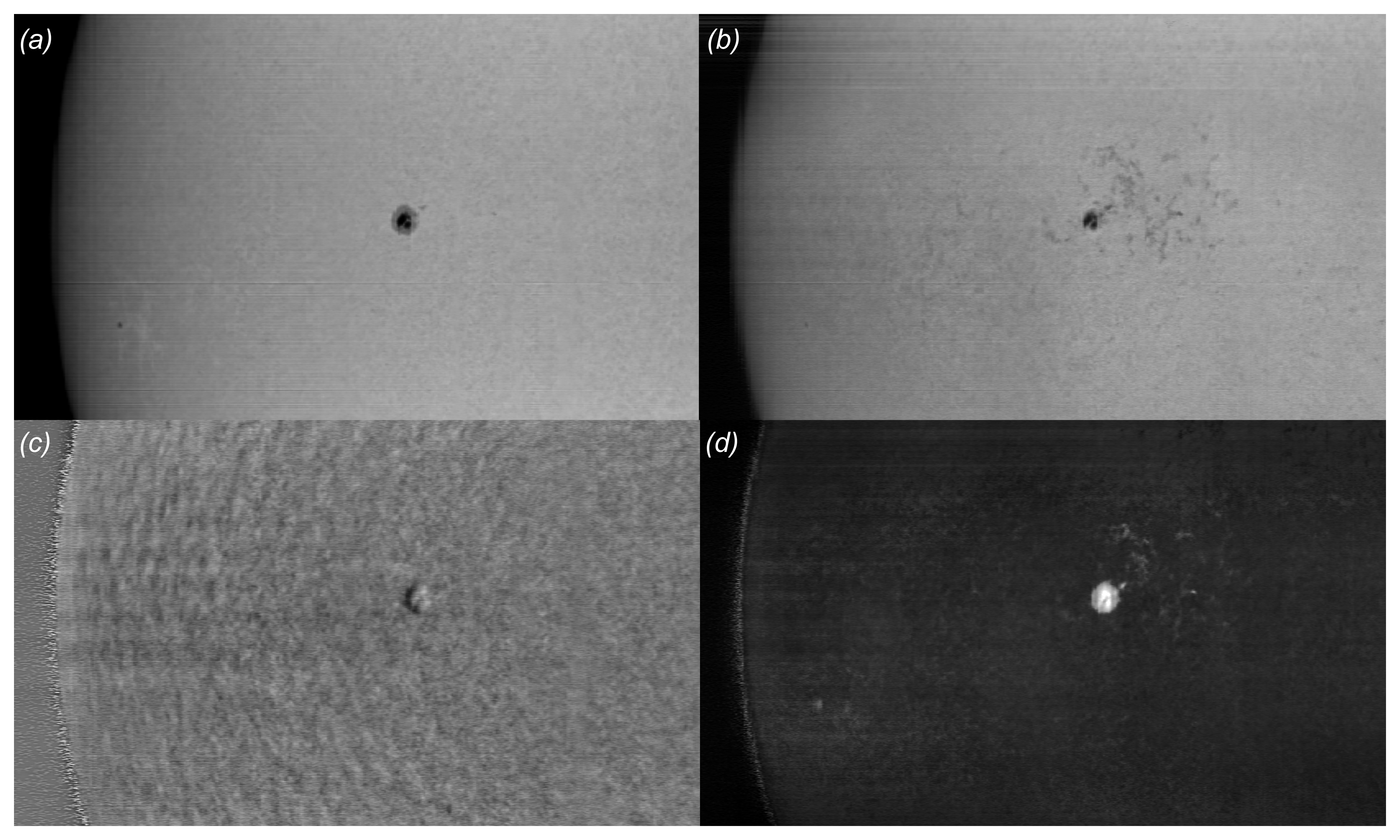 The continuum image shows the spot in AR12741 with a well developed light bridge. There is a small pore visible toward the left, bottom side of the image (in AR12740). The line depth image gives the intensity of the Fe 6305 line (relative to its quiescent, disk centre value). It shows quite a developed absorption structure surrounding the spot itself. Interestingly, there is reduced visibility of the penumbra in this image. The line shift image gives intensities which are proportional to the line shift away from an average, disk centre value. For the most part, this shift is due to the Doppler effect and indicates line of sight motion toward or away from the observer. It's similar to the dopplergram I've presented in previous posts but contains more direct information. Doppler shifts and velocities can be exactly calculated and mapped. In image (c), you can discern a large Doppler shift on either (equatorial) side of the spot, the black indicating motion away from the observer and the white indicating motion toward the observer. I believe this is the Evershed effect arising from surface flow along the penumbra which is radially outward from the spot centre. Finally, image (d) is a linewidth image in which the intensity is proportional to the width of the line. This image contains information about the magnetic field.

I'm interested in the idea of magnetic field mapping of the surface so I decided to model the connection between field strength and linewidth in more detail. As mentioned above, the Fe 6305 A line splits into a triplet of lines in the presence of a field. The separation between the outer pair of the triplet (the sigma components) is directly proportional to the field strength. The splitting of the sigma pair is unresolvable with my instrument but does lead to the observed line broadening. To model this, I ran a calculation in which I generated a sum of two separated Gaussians and fitted the sum to a single Gaussian to extract the fwhm, giving a relation between splitting and fwhm which I was able to fit as a quadratic dependence: fwhm proportional to splitting squared. Since the field strength is directly proportional to the splitting, we get the (quadratic) dependence of fwhm on field as shown in the figure below.

With this modelled dependence of field strength on fwhm, the linewidth image could be converted into a calibrated magnetogram as shown below. This is an "unpolarized" magnetogram in which the field strength and not its direction is shown. A full magnetogram with field polarity information requires polarized optics .... another project. The magnetogram is probably not reliable for fields below 0.5 kG but you can clearly see the maximum field strength of about 1.5 kG in the spot umbra. The reduced field in the penumbra and the light bridge is also visible. There are a couple of "hot spots" in the extended active region as well as stronger field visible in the pore. You can also see the correlation between the field structure and the line depth image (b) as well as the linewidth image (d). I'm not quite sure how to understand the correlation between line depth and field strength.

Comments and questions are most welcome.

Superb, Peter. Top notch science! It’s amazing just how much information spectroscopy can provide if you know how to extract it.

It will be interesting to see more of this type of analysis as cycle 25 develops. You should be able to map out plage formation and development as a function of magnetic field strength and determine the critical field strengths for pore formation and the birth and evolution of sunspots.

Is the 6305 Fe line particularly sensitive to these effects?

This is very impressive Peter, I enjoyed reading it!

Thanks Stu and Mark for your feedback and for reading through this lengthy post.

Stu, you’re right, it’ll be very interesting to apply this imaging to an active Sun. I like your suggestion about monitoring the development of field strengths and patterns in evolving active regions. Hope to get the opportunity.

As far as the Fe 6305 line is concerned, it’s definitely a favourite of the professionals. The NSO magnetograms are done in this line. It happens to have a large magnetic sensitivity but there are quite a few others of interest. The ideal line has a large “Lande g factor” , a number which is determined by the nature of the upper and lower atomic levels involved in the absorption. Also, magnetic sensitivity, through the Zeeman effect, increases with the wavelength, so there are very sensitive (Fe) lines in the mid-IR (1.5 microns) but imaging is more difficult. Finally, the ideal line is not significantly blended with other lines. The Fe 6305 A line is a good compromise with respect to all of these criteria (and relatively easy to spot in the spectrum....good for tuning the SHG).

Thanks again for the valuable feedback.
Cheers.
Peter

A very interesting post Peter, a nice bit of science

That is very awesome, Peter.

I am trying to think how you could see some of this in real time, at least in theory. For line shift and width, only thing I can do now is tune a band back and forth and note the change in view. E.g., in H-alpha (I know this one is not H-alpha) with a pressure tuner, you can pan back and forth quickly and see what appears and disappears is find the Doppler effects. There was a great view of that Saturday.

Perhaps a pair of filters off band on either side to create a binocular view. You might perceive some depth as the darkest part of the structure appears to shift to the side (might need to rotate the binocular to get the effect). Or if you can shift the color of one of the views (might need a fluorescent screen), you could in theory color code the shifts. Or else just rapidly change the tuning (rapid tilt) in a monocular view and look for an oscillation (much like a blink comparator). The latter seems the most feasible.

Not that this would be useful scientifically; the image is better for that. I just mean for fun.

Looks like the Fe lines require a SHG as they are pretty narrow. I don't imagine that a reasonable visual filter could be made. But the technique might still be interesting in wider visible bands like H-alpha.