I LOVE finding out about different ways to appreciate the Sun and light in general. Use this forum to post your info or questions about various outside the mainstream ways to appreciate our life giving star!
Post Reply
3 posts • Page 1 of 1

We have finished a fairly extensive study of the Zeeman effect in helium using the same Fabry-Perot interferometer and magnet used in our earlier study of Zeeman splitting in neon. The following series of photos shows the thought process behind the current experiment. First we looked at the spectral lines of a helium discharge tube in the normal way with a transmission grating. The tube was driven by a neon transformer, which provides a fairly high current (total power was around 10W). Helium is a very good light source for these experiments as it is quite bright and the tube does not age (unlike hydrogen and mercury).

The spectrometer used above employed a 600 line/mm grism from Paton Hawksley, a 10 micron slit from Thorlabs and an 80mm enlarging lens as a collimator. To use with the home-made etalon, we fabricated a very wide slit by cutting a 2.4mm slit into a piece of thin black cardboard. In front of the cardboard slit we put a 100mm f4 bellows lens to act as a collimator. A 600 line/mm transmission grating from Paton Hawksley (50mm square) was attached to the front of a 100mm camera lens (with another bellows that could be angled). The result when using helium light: Careful observation reveals the two green lines and the blue line overlap. We then put the Fabry-Perot etalon in between the collimating lens and the transmission diffraction grating. The setup then looks like the following, as viewed from the camera (the helium discharge tube is behind the black screens): 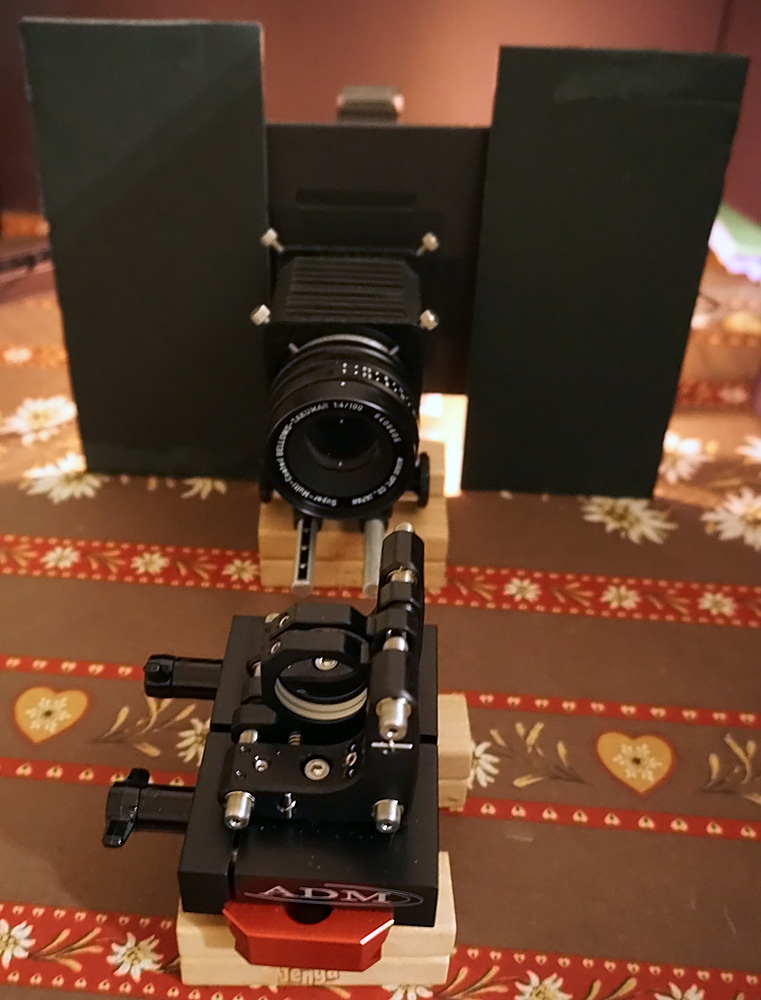 The bright yellow line of helium (first discovered in the solar spectrum) is composed of several very closely spaced lines of similar brightness; hence the interference pattern in the yellow line is not very sharp. Next the helium tube was put in the magnetic field created by the pair of neodymium magnets: 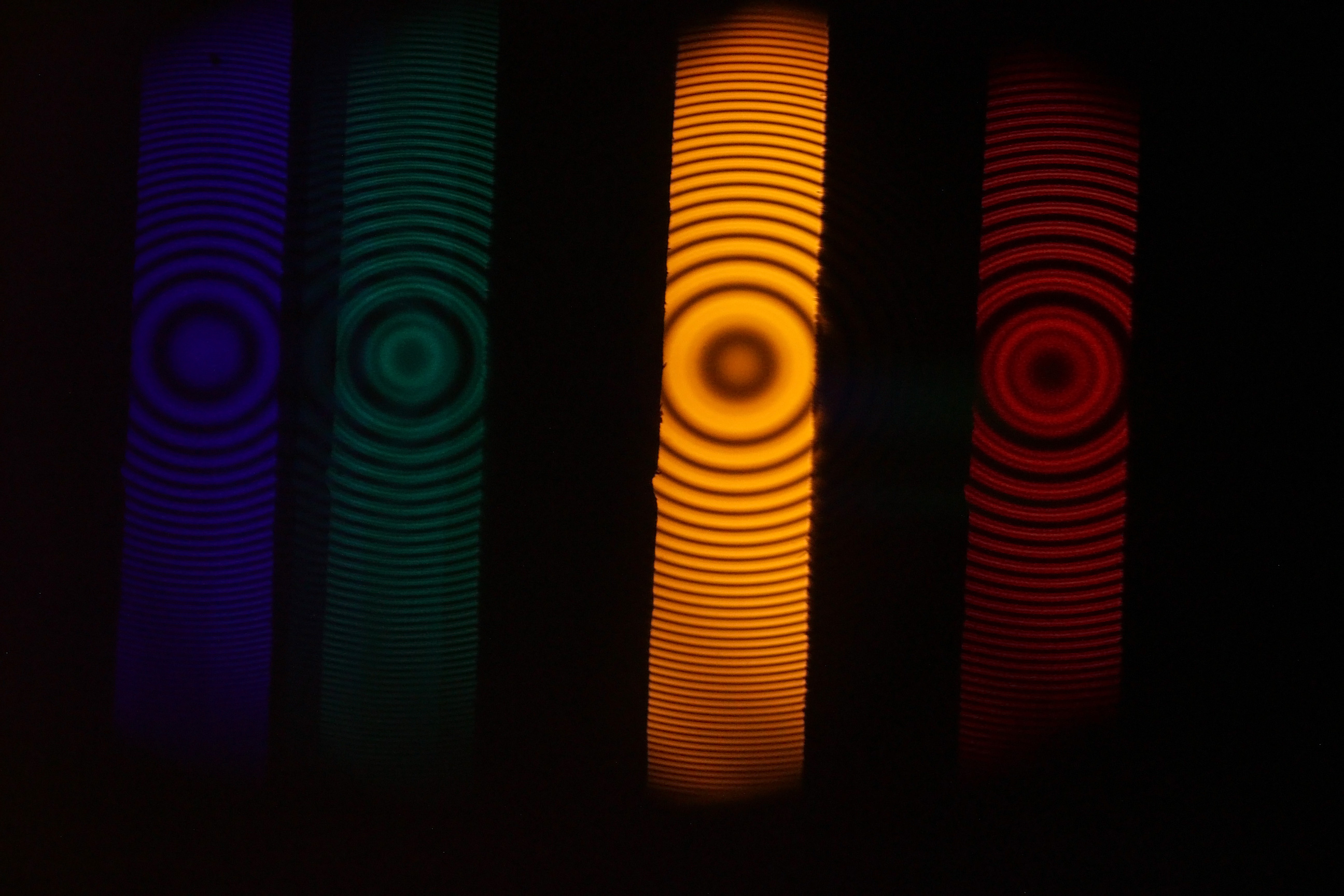 The interference fringes split due to the Zeeman effect. This is most notable in the redline. Next a linear polariser was attached to the front of the camera lens parallel to the magnetic field: Finally, the polariser was rotated to be perpendicular to the magnetic field: We then decided to examine the red line in more detail. We removed the diffraction grating from the optical path and added the #29 dark-red filter. We also increased the focal length of the camera lens from 100mm to 150mm. The visibility of the Zeeman splitting was enhanced. First with no polariser, all three lines are visible: 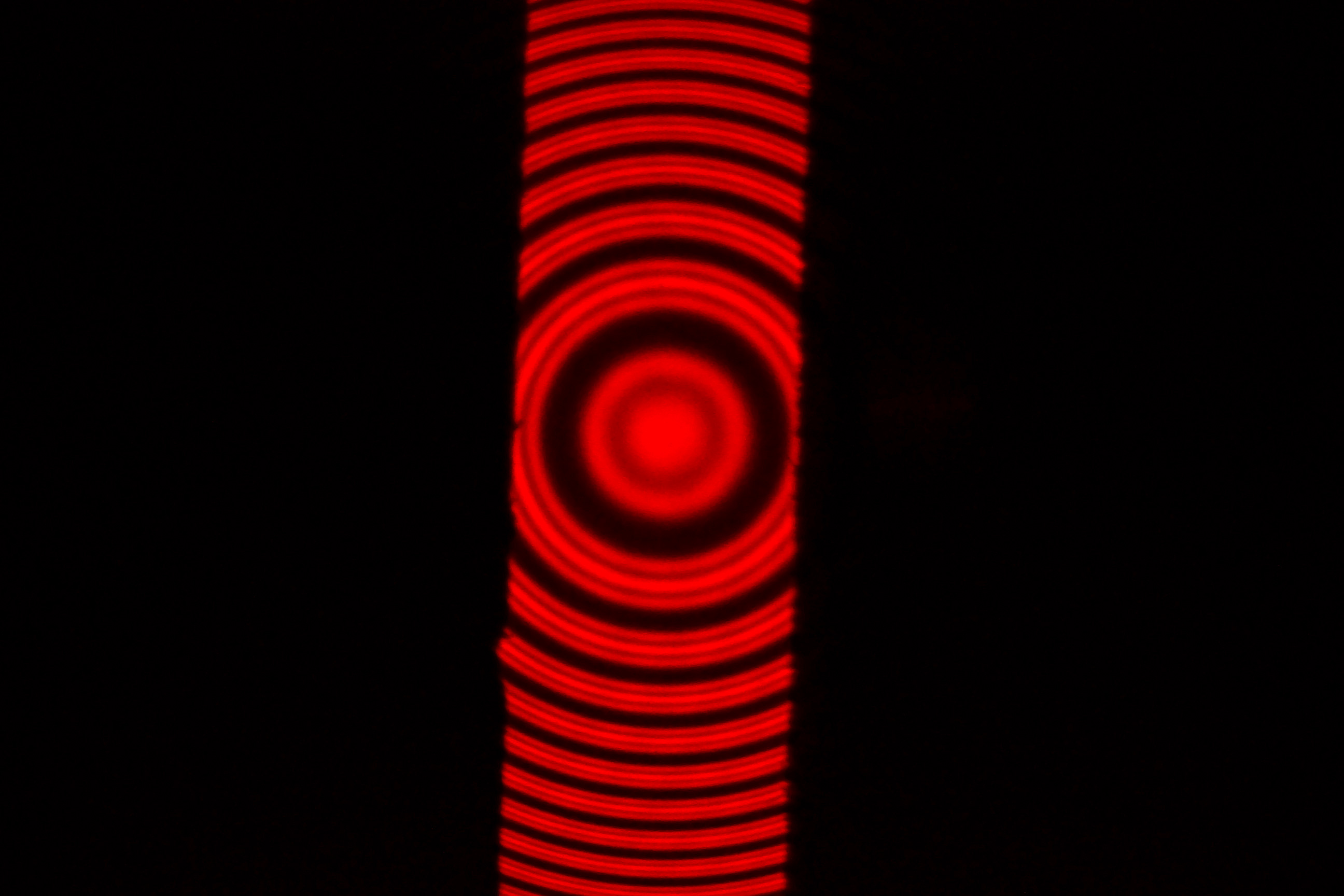 With the polariser parallel to the magnetic field, only the central line is visible: With the polariser rotated perpendicular to the magnetic field, only the two magnetically split lines are visible: To conclude the experiment, we replaced the #29 dark-red filter with the #47 violet filter. First with the polariser parallel: Then with the polariser perpendicular: 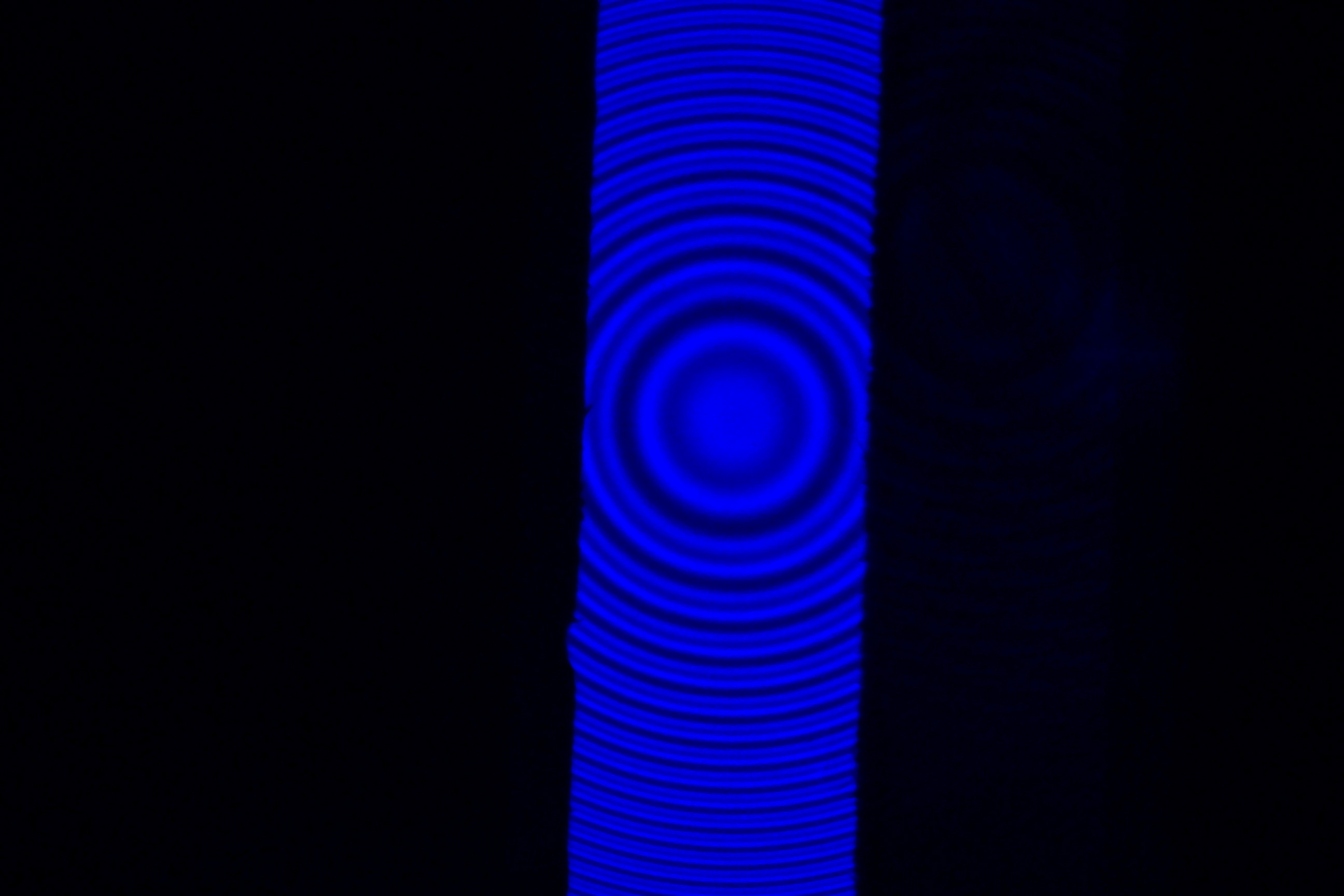 Although the fringes are not as sharp as with the red line, the "classical" Zeeman splitting seems to be the same. The green line also seems to be "classical" rather than "anomalous". The lack of sharpness of the violet line could be from the camera or etalon optics. Following the suggestion of Peter Zetner, I took a calibration image with our low-pressure sodium lamp (above), using the same conditions as the final images (150mm camera lens with the filters vs the earlier 100mm with the diffraction grating). Other parameters: original image size is 5184 x 3456 pixels (Canon 100D); all images were reduced in size by 50% in post-processing (i.e. 2592 x 1728).

Notes on collimation: the finesse of the etalon remains a little disappointing. While the collimating lens in this experiment provides a sharp image of the slit, the light from the helium tube is collimated the old fashioned way: the 7mm diameter discharge tube is visible through a similarly sized hole and placed approximately 200mm away from the slit (i.e. f29). Using a lens in between did not seem to help (in fact seemed to make it worse). So perhaps the relatively low finesse is due the etalon itself; more work needed here.

Homework problem: assuming the magnetic field strength is 9450 gauss (my best first principles guess), what is the electron charge to mass ratio derived from the splitting of the red and violet helium spectral lines?

Re: Zeeman effect in helium using a home-made Fabry-Perot etalon

Here is a video of the helium red line through the #29 filter. It is a slightly different setup that maximises brightness in order to make a video so the lines are not quite as sharp as the setup above. You can see the interference fringes change from single to double as the polarising filter is rotated.

Re: Zeeman effect in helium using a home-made Fabry-Perot etalon

The results you are achieving are very impressive!

http://brierleyhillsolar.blogspot.co.uk/
Solar images, a collection of all the most up to date live solar data on the web, imaging & processing tutorials - please take a look!
Top
Post Reply
3 posts • Page 1 of 1