Frankenscope? Let's see it!***be advised that NOTHING in this forum has been safety tested and you are reading and using these posts at your own peril. blah, blah, blah... dont mess around with your eyesight when it comes to solar astronomy. Use appropriate filtration at all times...
Post Reply
14 posts • Page 1 of 1

Anyone that knows me will know that I have a pathological hatred of the crummy method of holding cameras/eyepieces/filterwheels and so on in focusers. Single screw clamps are the work of the devil and those flimsy brass strips that inhabit focuser clamping arrangements seem perfectly designed to jam most things. There's no standard for undercuts, with some manufacturers using tapers, some putting the undercut exactly where the screws clamp and some too narrow for the brass strip.

Twist compression clamps are better, with the Baader twist-lock being a "proper job", but none are as good as a proper threaded connection from the focuser to the camera.

I always have a nagging paranoia that an expensive focal reducer, filterwheel and camera will fall out of any focuser that uses clamping screws or compression clamps. If that wasn't bad enough, then most clamping screws have the annoying habit of tilting the imaging train, or introducing slop. This is a BAD THING, especially on fast 'scopes with their narrow focal plane. It's even worse in hydrogen-alpha imaging, as tilting can knock the kit off-band.

Daystar seem to have made a bit of an artform of producing the worst possible clamping arrangement when they designed their Quark. The eyepiece/camera clamp uses a horrible single screw arrangement that is impossible to use without it tilting the camera. Plus, the thread that they used is an archaic threadform, not the far more common T2 thread. Luckily, there is now an adapter on the market that allows a T2 thread to be fitted.
Now, my focuser has a M63 thread at the rear, which thankfully, is becoming more popular. My scope is an Altair Astro 115mm triplet, which uses this focuser: http://www.teleskop-express.de/shop/pro ... ansm-.html
Most Quarks that I have seen also need an extension tube to get focus. I've used 2" extension tubes that have twist lock clamps at one end.....they are OK, but still allow for a bit of tilt.
I have been speaking with Mark at JTW Astronomy and we've designed an adapter that not only screws into the focuser, but which also allows a 2" UV/IR or Baader H-a filter to screw into it as an ERF. 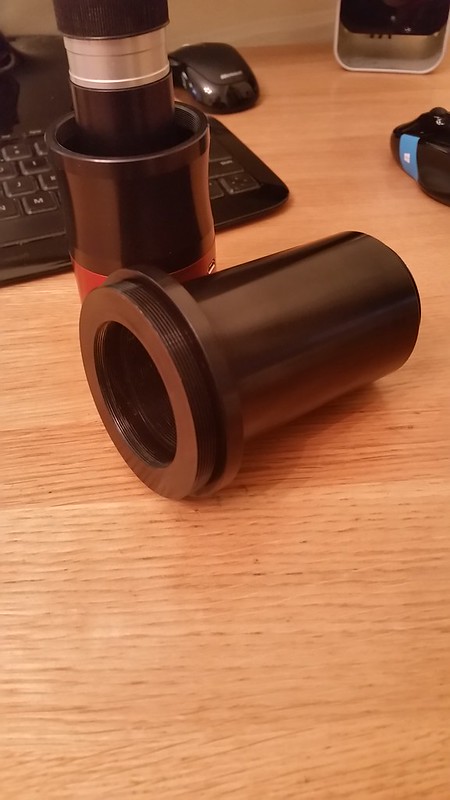 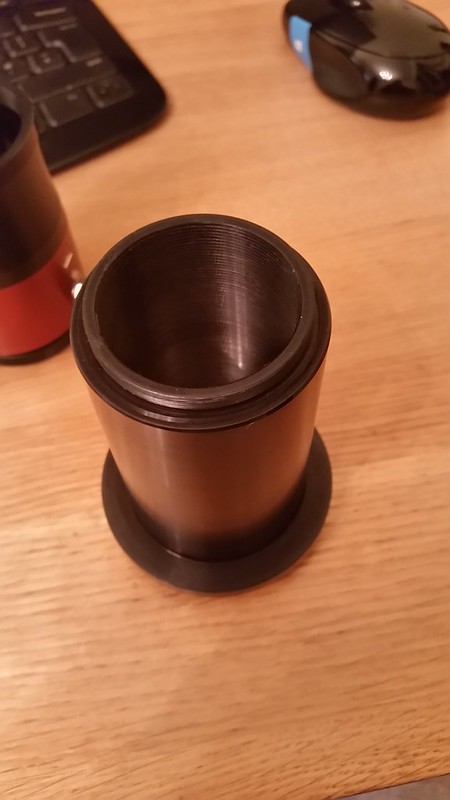 To use it, screw in the UV/IR filter at one end, remove the 2" barrel off the Quark and screw the Quark into the adapter and then screw the whole shebang into your focuser. 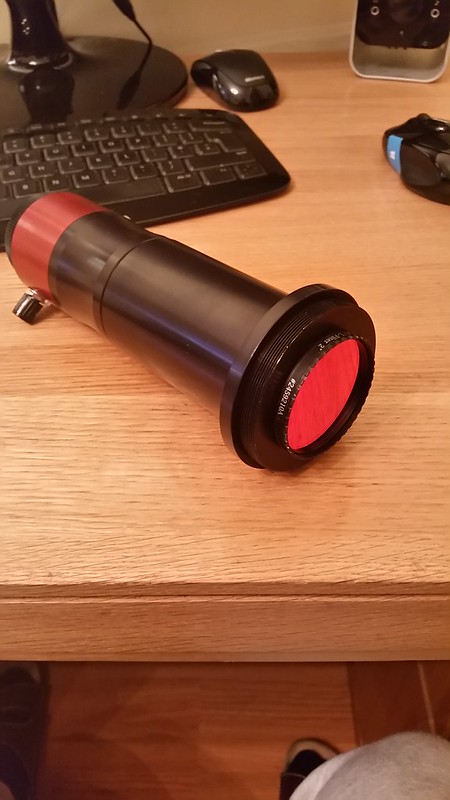 Hey presto, a fully screwed, orthogonal imaging train right through to the camera. 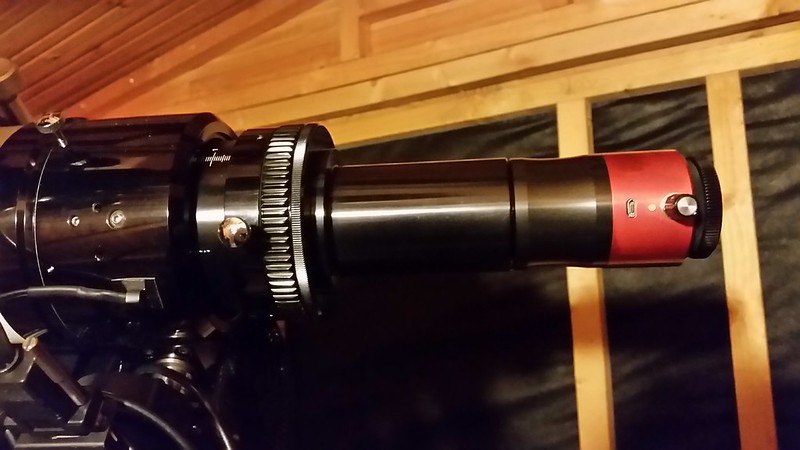 It's a heck of a lot more solid than the extension tubes and clamps and I KNOW that everything is properly in line. I won't get a chance to "first light" it until the weekend but I am very pleased with how this turned out! Big thanks to Mark for taking my scribbled drawings and turning it into a properly made piece of kit!
Last edited by _Zakalwe on Tue Aug 18, 2015 6:25 pm, edited 1 time in total.

Very useful modification. Thanks for sharing. And what about eyepiece/camera clamping?

That's a very good mod there!


Check out the the squareness of the F-P etalons to the optical axis. In other words, there should be no compromise on the mechanical set-up. As a rule of thumb the maximum allowance for the tilt is 0.1°. 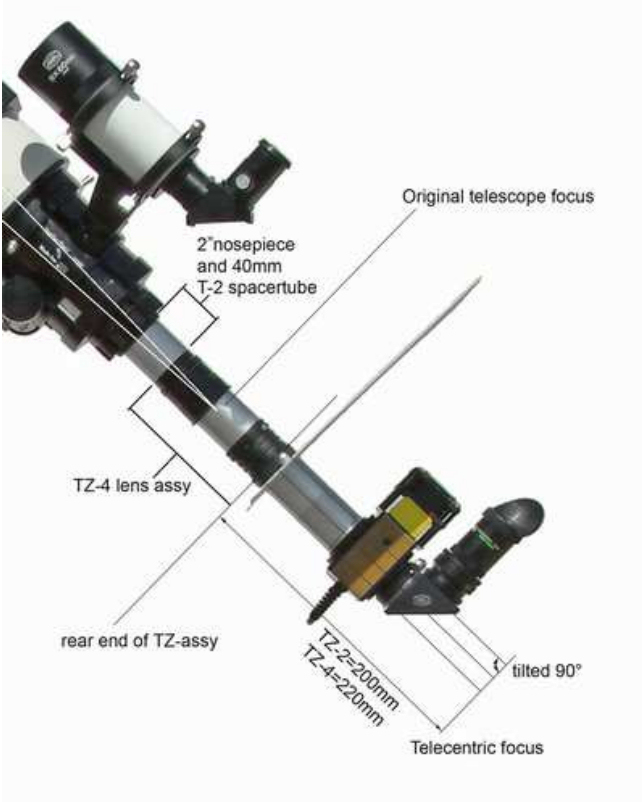 
Diagonally parked in a parallel universe.

Rybak wrote:Very useful modification. Thanks for sharing. And what about eyepiece/camera clamping?


A chap on the Stargazers lounge forum had a prototype adapter machined up, which one of the UK retailers are now selling:

Thanks. Made an order.

There now is a second supplier of camera thread adapters available:
http://www.rowanastronomy.com/productsa4.htm#adaptors

The same company also do a nifty tilt adapter that is getting good reports. The design is interesting as it uses a spherical bearing surface to prevent light leakage. I get Newtons Rings with my Quark and ASI 174, which flats can deal with (although a bit hit-and-miss). A bigger problem is caused by banding which flats have much more trouble sorting out.

I have one of these on order and will report back when it arrives. Dave Smith has tested one of these and gives it a glowing report:
http://stargazerslounge.com/topic/250848-look-no-rings/ So, it looks like I will be able to achieve exactly what I wanted- a fully screwed connection with a proper tilt adjuster.

And here we go. Finally a fully threaded end-to-end imaging train from focuser to camera, with adjustable tilt adapter.

I just need the rain to go and pester someone else so I can test it all! 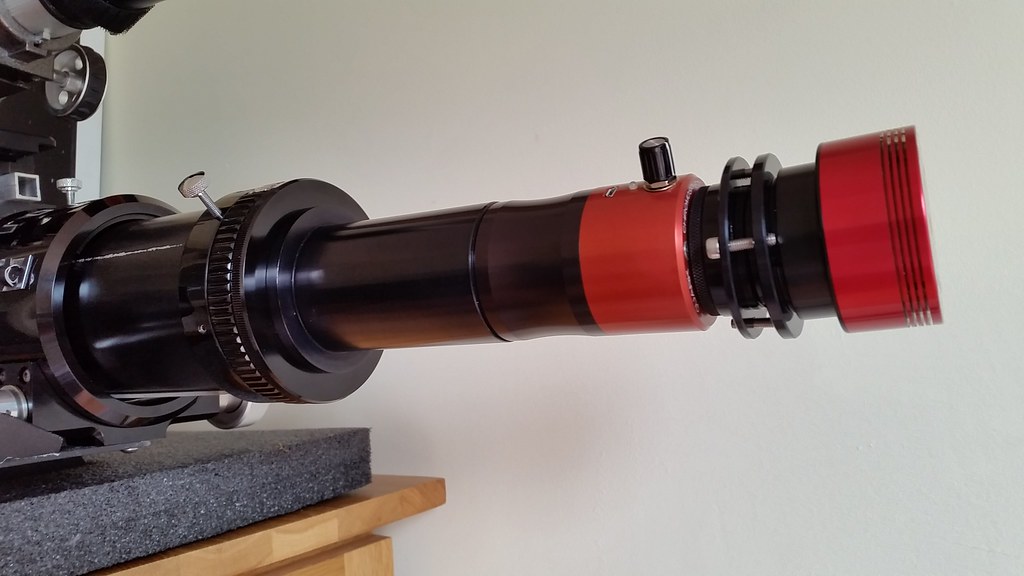 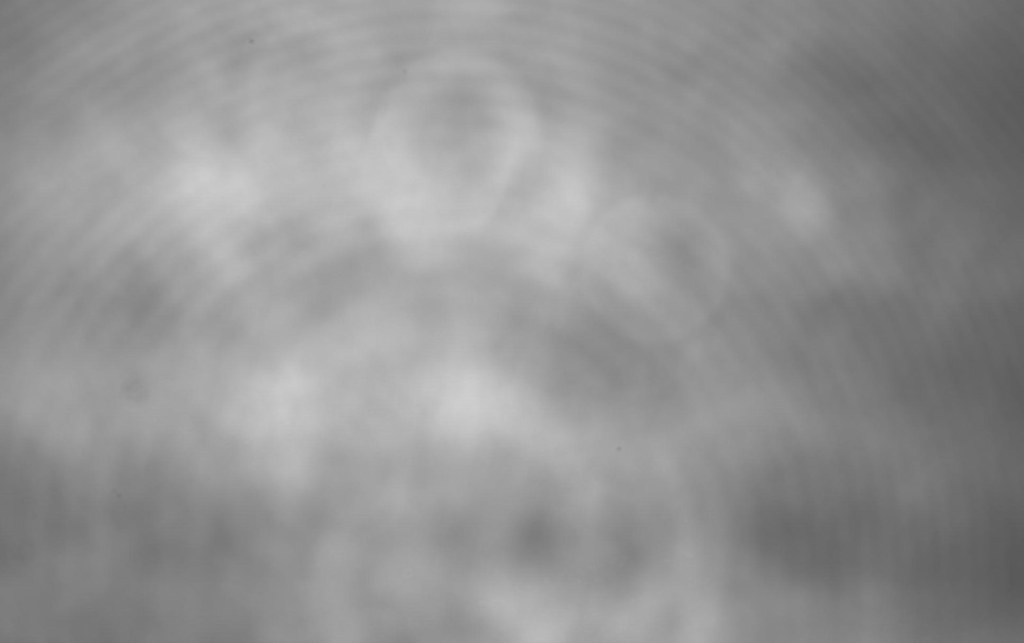 ^^ A flat field before fitting the tilt adapter 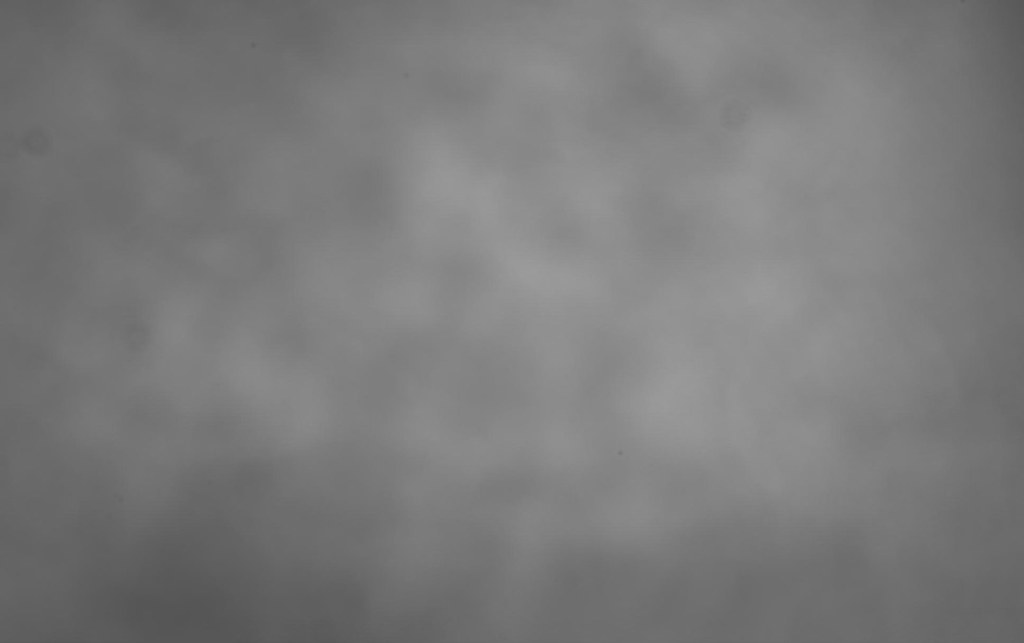 ^And after fitting it.

I am liking this so I've ordered the adapter but I have a Moonlite focuser which has the 2" female eyepiece holder so I need to know what the thread is on the nosepiece side of the Quark is so I can have a extension tube made to go from the Moonlite focuser to the Quark.

Can someone tell me what the thread is.

axlefoley wrote:I am liking this so I've ordered the adapter but I have a Moonlite focuser which has the 2" female eyepiece holder so I need to know what the thread is on the nosepiece side of the Quark is so I can have a extension tube made to go from the Moonlite focuser to the Quark.

Can someone tell me what the thread is.

If you have ordered the Moonlite with a 2.5" drawtube then it will have a female M68 x 1 thread on it. The Quark has a standard M48x0.75mm (2" filter thread) female thread.

The adapter that Mark at JTW Astronomy made for me would work perfectly.

_Zakalwe wrote:
If you have ordered the Moonlite with a 2.5" drawtube then it will have a female M68 x 1 thread on it. The Quark has a standard M48x0.75mm (2" filter thread) female thread.

The adapter that Mark at JTW Astronomy made for me would work perfectly.

Zak my Moonlite draw tube doesn't have a threaded end only the brass ring with 3 thumb screws so I am getting my machinist to make up a 2" tube with 2" thread on one end.