Frankenscope? Let's see it!***be advised that NOTHING in this forum has been safety tested and you are reading and using these posts at your own peril. blah, blah, blah... dont mess around with your eyesight when it comes to solar astronomy. Use appropriate filtration at all times...
Post Reply
3 posts • Page 1 of 1

The next step, i want more Aperture.
I use an old Bresser 6" f8 FH-Refractor, shorted the Tube for 110mm, in Front i found a second-hand 135mm C-ERF.
At first i use the original PST, ist ok but not the Hit
Then i became a second-hand Conversionskit, to remove the PST-housing, from Oliver Smie, so I got to know Oliver.

And then the Clouds are coming soon.....

No Sun.
Two weeks later i go to a german H-Alpha-Meeting in Rüsselsheim near Frankfurt/Main.

My first-light....ohje. I put it on my NEQ-6 and the Leader of the Meeting looks through at first.
He looks and looks....three minutes later i sayed to him, what is happend.
I thought , he sees nothing.
Than he say, wonderful.....a stone fell from my heart.

Later we tested in my Setup the Coronado BF10 and 15...no, terrible, many reflections and worse H-Alpha.
This Scope needs a Barlow, i use the Zeiss-Abbe-Barlow.

With an 12,5mm Microscope-eyepiece and a black cloth over my head, i came to 192x, assuming good Seeing, wonderful contrast on the disk and the little. little Prominences, with original BF5 !
My Neighbour at this Meeting, use an 110mm Apo with heated Daysstar...he was disappointed, because he invested a lot of money..... 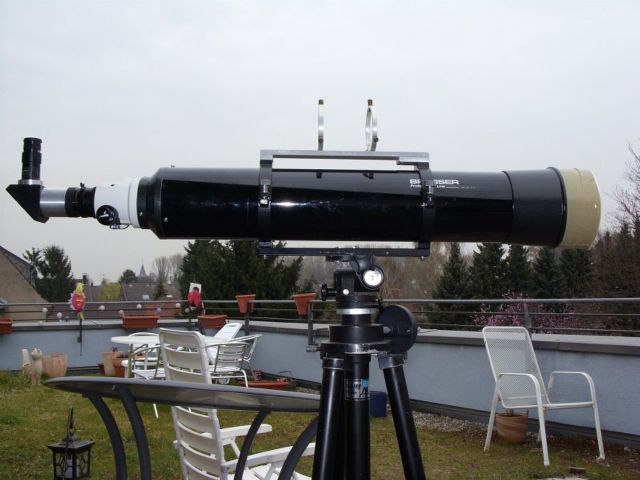 Re: Now my third PST-Mod

Thanks for the setup view and description

Re: Now my third PST-Mod

That's a great mod! Glad it is working well for you