Hello,
In the afternoon the sky was hazy but clear enough to try the new setup.

The frankenscope consists of a Solar Scout SS60 etalon transplanted on a Celestron 80ED, they are connected by means of a 3d printed coupling and a 2" extension adapter housing a BAADER 35nm Ha filter, as an internal ERF. After the imaging session, the internal ERF + extension tube were stone cold. 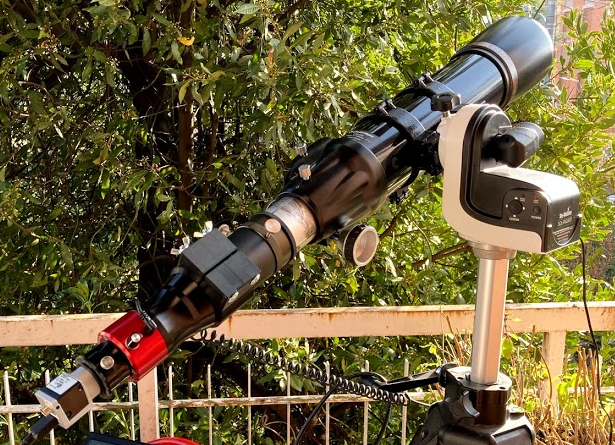 To reduce the number of adpaters needed, I also built a small power bank that runs off 18-20V cordless tool batteries and provides 12V (1A) for the mount as well as 2x 5V (2A each) for the etalon oven. 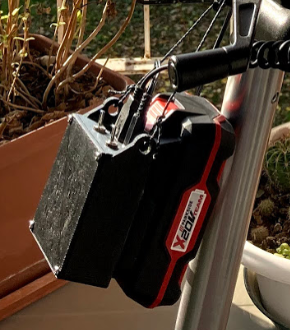 Note1: The focusing tube is not dirty... I am a huge fan of molybdenum grease, that is pitch black.
Note2: The ugly 3d printed clamshell adapter is doing a good job at keeping the etalon unit aligned. The etalon is now on band at -2 -3 ccw clicks, while previously in the SS60 it was on band at -4 -5 ccw clicks
Note3: Sandblasting and re-painting the balcony railing is on the to-do list

If someone is interested, I will prepare a dedicated post on the SS60 etalon mod (fully reversible) and/or the power bank. Considering the seeing conditions I am satisfied with the results, especially comparing them against the ones obtained with the stock SS60 scope.

The imaging setup length increased considerably: it is a bit wobbly when touched, but the oscillations die out quickly.
Next upgrade on the list is to build a motorized focusing mechanism.

P.S. A question to the owners of a SolarQuest mount: I purchased mine 2nd hand and only now I noticed a large amount of play in the alt-axis. The az-axis is ok, but the alt-axis can be moved by 0.5-1 deg by hand (without much effort or leverage, there is only a slight springyness to overcome) and I can hear the noise of something coming to a hard stop inside is it the same for your specimen or it is only my case?. Once this "backlash" is cleared (e.g. telescope always nose heavy) the mount works flawlessy, so I do not think that the worm gear is stripped. Maybe the gearbox inside is loose? Could you point me to a link with disassembly/tuning instructions for this type of mount or a similar one?

Nice job and a good first image I haven't seen ar2781 since it first came onto the disk, so cloudy here in the UK.

I have been using my SS60 quark etalon unit on my 6" refractor for the past 18 months and it is superb.
Over winter my observatory is to low for the sun so I take mine out on my ST102.
I to got a Baader 35nm but I find it loses to much light when imaging, so I have only used it a few times, I just use a UV/IR filter and no front ERF.

For visual chromosphere I always use a bino head it gives much more contrast. you can use a modified microscope one and 1" microscope eyepieces as the etalon is not big enough on a quark to illuminate a 1 1/4 eyepiece fully. My main eyepiece pairs are PZO 5x they = 50mm and Zeiss Jena 8x they = 32mm.
For proms I use a single eyepiece.

Just out of interest how was yours with the 60mm daystar objective?

Hi Rod,
I have been clouded out since then :-( and today it's even pouring outside...
Thank you for the suggestion, I have a spare 2" UV-IR cut filter laying around and I'll test it instead of the Ha 35nm.
The SS60 is nice grab&go scope, the stock lens is fine for full disk images, since I have a camera that fits it perfectly:
viewtopic.php?f=4&t=29786
Hovewer for closeups I found the image to be too dark and lacking detail... also hated the helical focuser.
IMHO the mechanical design was a bit disappointing: if the etalon alignment is so critical, there are no mating surfaces to provide concentricity or at least axial parallelism... everything is left to the four grub screws locking the etalon to the main body.

Yep the focuser is pretty poor, the helical focusing should have been right up at the front where the lens is, if they had to use that method at all.
My first ss60 had to go back one reason was because of the focuser, it was machined bent so the suns image went around the field in a very wide circle as you focus, also the etalon would not come on band. I waited another month for the next one and the lens is rubbish in that I have to stop it down to 27mm f30 to get any detail, I have been thinking about asking Daystar if they could send me another lens.

The etalon is good though but does need flats dark and light areas.
Your image seems much flatter than mine, have you used flats?
And your full disk is excellent in comparison with what I get, I would be well happy with what you're getting.
I do like you processing nice and light seems more realistic and keeps the fine detail.

I am mainly visual as well but looking forward to more of your images.

Hi Rod,
I bought my unit 2nd hand so I have no experience with Daystar's customer support.
Agreed, not much QC at all: straight out of the box my unit would come on band almost at the blue end of the tuning region... upon disassembly, I found two major dings on the mating surfaces (the black anodizing is pristine, so I assume that the piece was dropped on the floor right after CNC machining, then went straight to anodizing and final assembly). One of those results in the etalon unit being slightly crooked with respect to the lens unit. By adjusting the four grub screws and shimming the shoulder opposite to the marred surface I was able to gain 1 click of the tuning knob.
My opinion on your unit that would not come on band is that the optical axis was way off and could not be compensated by the heating element alone for on-band operation.

I prefer imaging because I love photography and it is also a necessity: I have perfect eyesight (10/10) but too many floaters in the vitrous humour make really frustrating concentrating on the details (the situation is way worse for bright object at night, such as planetary observations, the random diffraction drives me crazy

Concerning imaging, yeah I prefer a more gentle look Vs contrast cranked up to maximum.
I use flats on detail views only, can not apply flats to full disk images (in fact there is a residual vertical light-dark striping).
I now always take flats by placing clear cellophane/clingy film in front of the lens, without touching focus, since I never had good results with the defocusing method.
Concerning Newton rings: while waiting for a tilt adapter to arrive by mail, I 3d printed a 3mm "wedged" spacer ring. 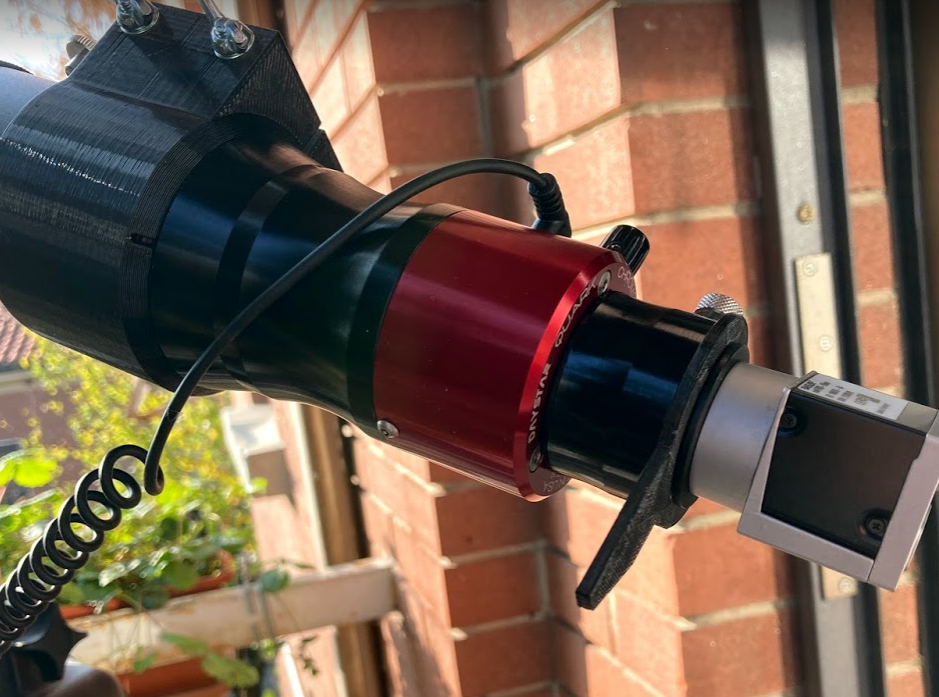 The ring is sandwitched between the eyepiece holder and the shoulder on the 1.25" adapter nose of the camera in order to exploit to my advantage the inherent droop/misalignment given by the eyepiece holder setscrew. I rotate it around until I reach a position where the Newton rings disappear: crude but working