Frankenscope? Let's see it!***be advised that NOTHING in this forum has been safety tested and you are reading and using these posts at your own peril. blah, blah, blah... dont mess around with your eyesight when it comes to solar astronomy. Use appropriate filtration at all times...
Post Reply
39 posts

I routinely use a rotating T2 adjuster to hold the camera's T2-1.25".
This allows me some leeway in achieving camera focus. 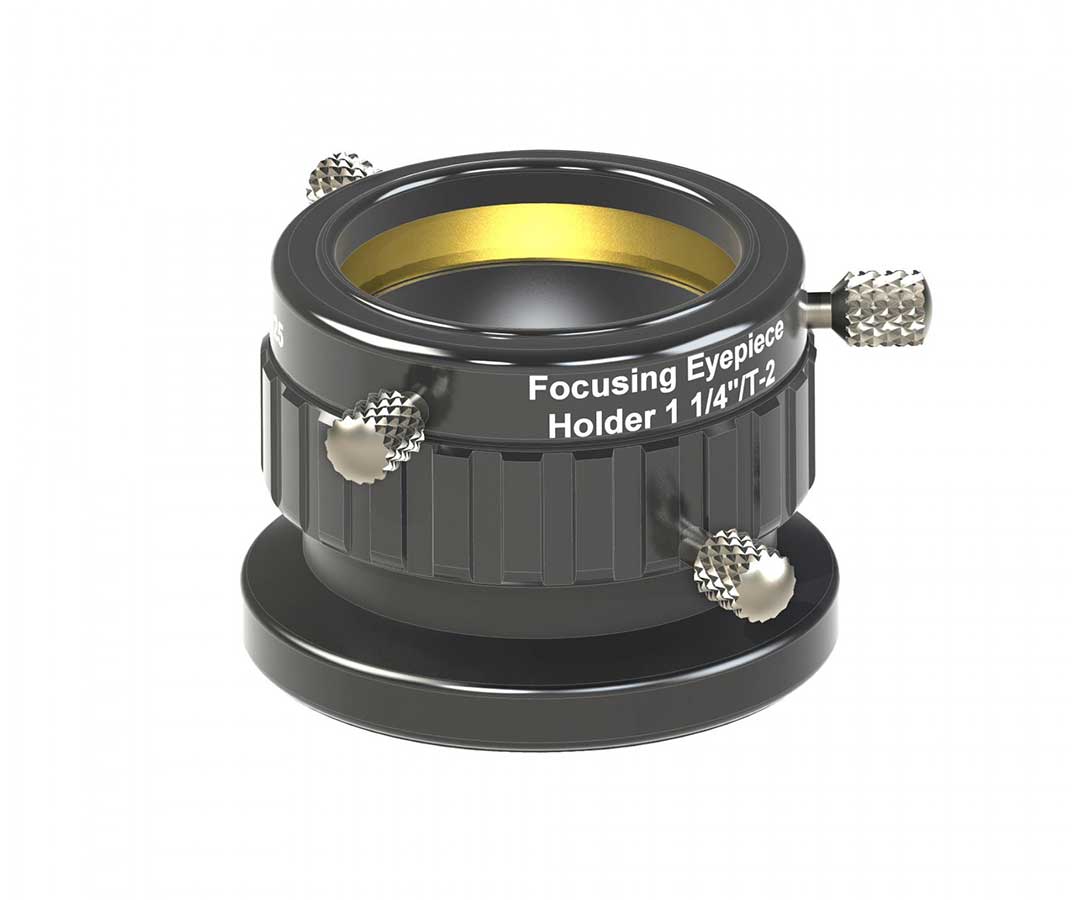 
I have another TS T2 helical focuser but the driving pin fell out!
Perhaps a drop of red Loctite would hold the pin in? 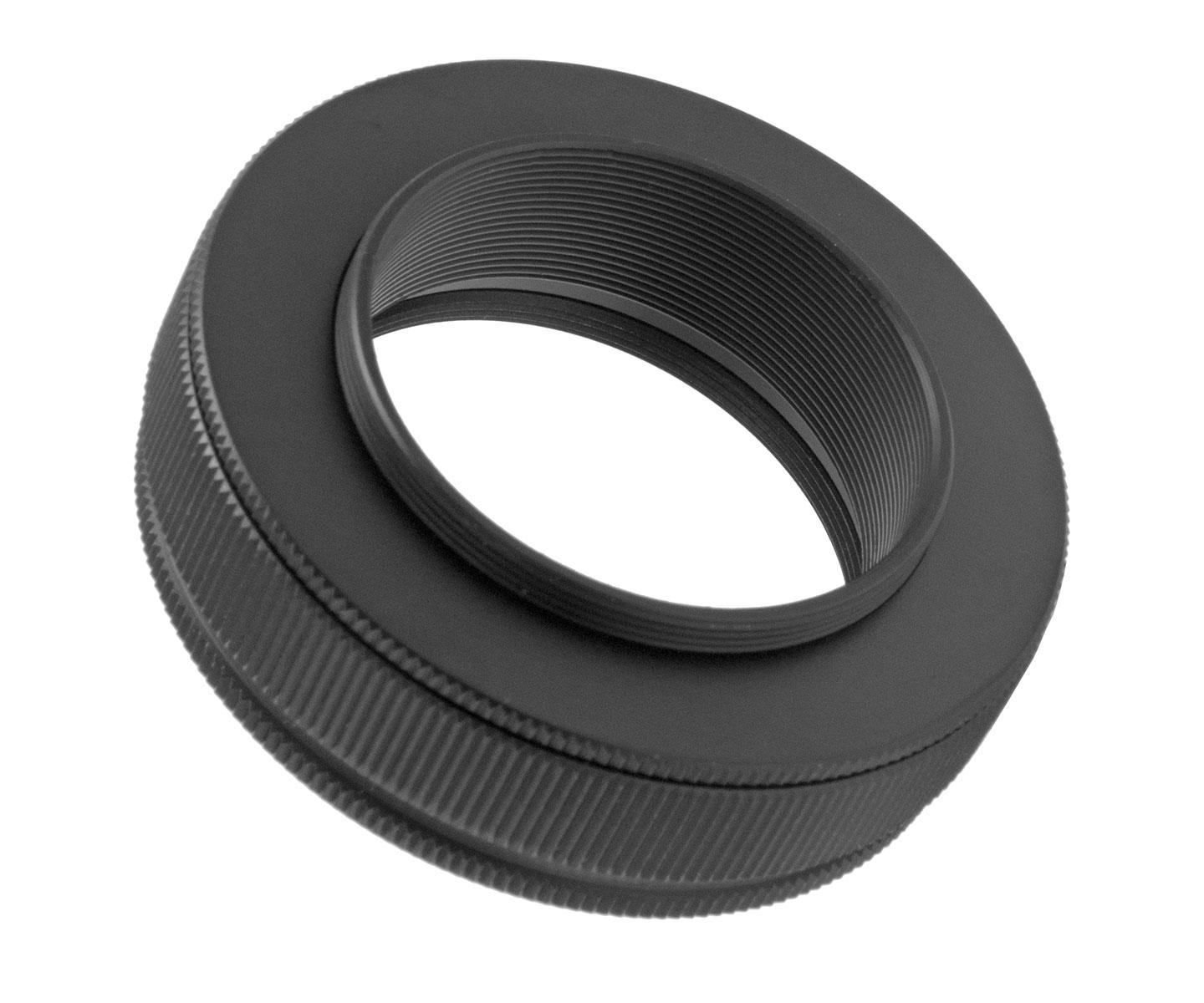 Do you get enough focus travel with all of these because you use quite a few different glasspaths ahead of the camera?

(I;m not familiar with using the glasspaths so don't know how much focus varies between them all) 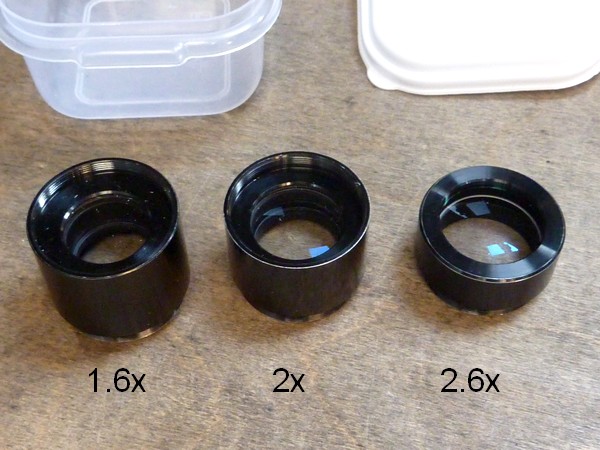 Overall variation of focus point, compared to no GPC at all, is less than 18mm or 3/4".
My 2" SVBony helical focuser could easily manage these changes.
But its considerable length was a nuisance when used without a GPC.

After suffering flexure and then failure with the short throw helical I played safe and went to sturdy 2" fittings.
Only the last two fittings at the camera were T2 and 1.25". The BF sits inside the last 2" adapter.
The first image is the setup I have been using for quite a while now:

The second image shows my latest attempt with the now overburdened, helical focuser at the backplate: 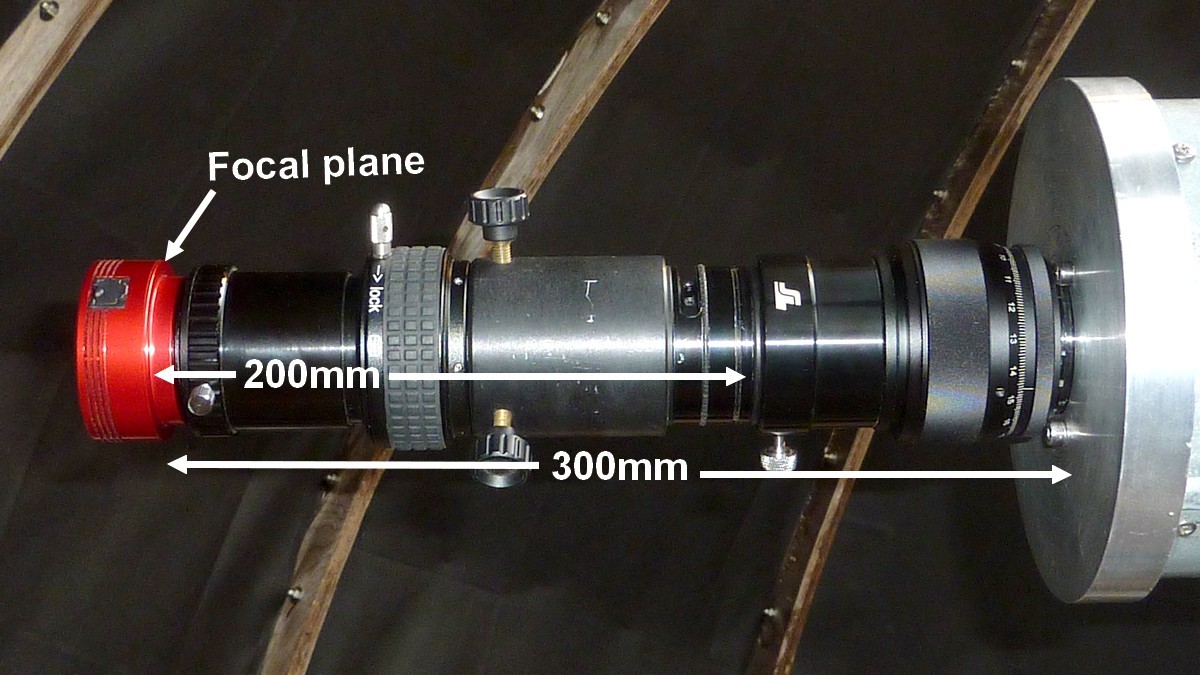 The helical focuser is soon to be replaced with an FTF2535HD.
The FTF is [probably] slightly shorter but not sure yet. 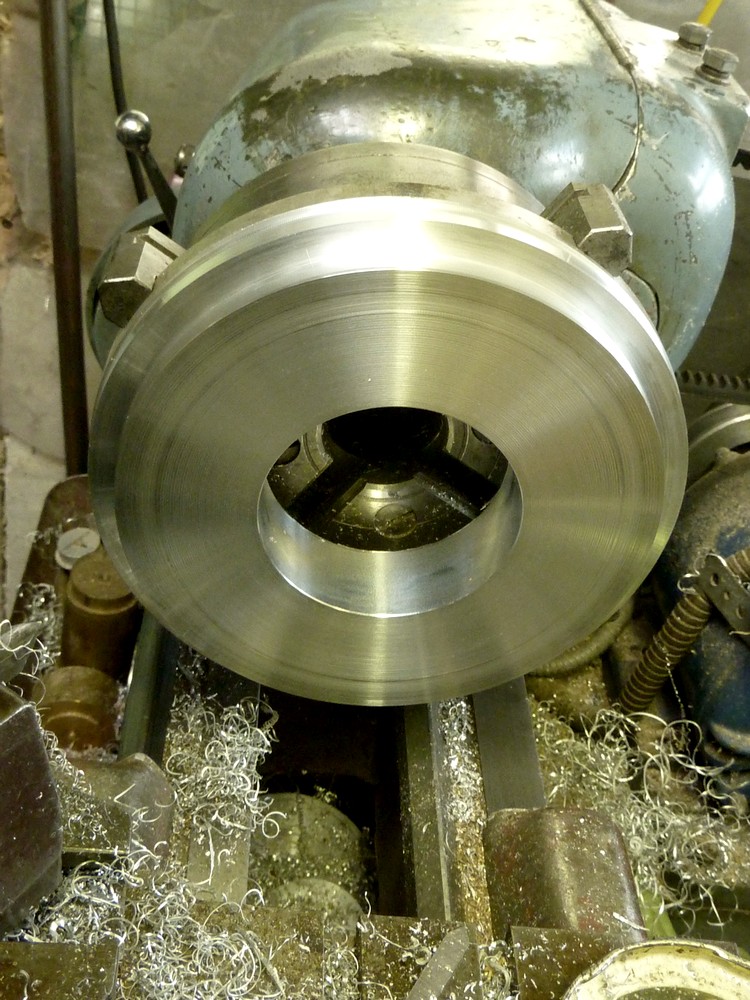 I have turned a new backplate for the FTF but won't have all the necessary adapters until Friday.
That is the 2" end cap sitting inside the FTF base plate with levelling screws.
Normally the 2" adapter would screw into the top of the drawtube.

The large adapter, nearby, was supposed to support the protective UV/IR filters on forward extensions.
A work in progress because the FTF2535 has no internal thread on the drawtube. 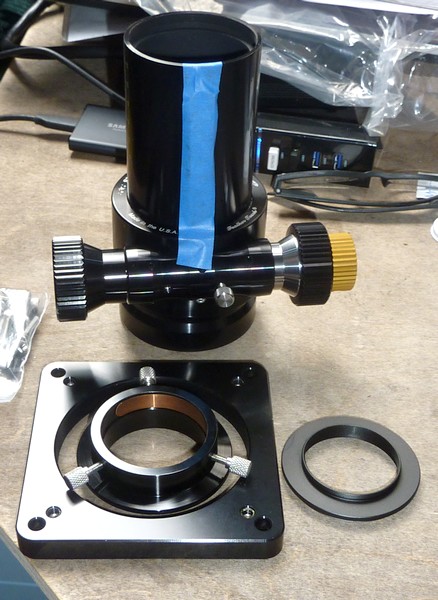 How do you focus the camera in the 'second' new arrangement? The 200mm you have labelled up isn't going to be 200mm in reality as you're using a glasspath, it will be greater as it throws the focus further.

marktownley wrote: ↑
Thu Oct 15, 2020 12:29 pm
How do you focus the camera in the 'second' new arrangement? The 200mm you have labelled up isn't going to be 200mm in reality as you're using a glasspath, it will be greater as it throws the focus further.

The focusing eyepiece holder + tromboning the camera's T2-1.25" adapter will have to cope for the moment.

I'm looking at T2-1.25" helical focusers which will take up much less space than the present 2" helical.
The ZWO and TS helical focusers are a bit short on range. I need the 1.25" for the GPCs.
If I didn't need GPCs I could screw the camera straight onto the Lunt B1200S2.
That worked for native focal length [1500mm] but then there is nowhere to fit the 1.5" GPCs.

For SCTs and MCTs with moving mirrors you need to use this set up method.

The quoted FNo and the best focal surface is set to be with the focus a fixed point behind the back plate of the telescope. You need to know what this distance is for your particular model. Should be set for a typical eyepiece used in the scope I would expect, or more likely old 35mm film camera on a T-mount. So using a 25mm Ortho/Clave' with clear field stop or an old 35mm camera on a T-mount should work to find the right point.

As I recall I asked on CN for this distance for a Celestron and posted the answer I got here, from an expert there.

You then need to set the PST collimating lens to be 200mm before that point to get best focus, and not the least circle of confusion. As you are then very close to the best focal surface I would expect using the mirror to fine tune focus would be fine.

On my fixed mirror Mak180 its easier as the focal surface is at a fixed point after the back of the focusser body. 120mm so I need to set the moved forward PST lens 80mm forward plus half the focusser travel forward of the PST body. I just use the Mak180 focusser to get focus. After setting the collimating lens 80mm forward as best as I can measure and the eyepiece 200mm after the re-collimating lens I measured where the front position of the PST vacant collimating lens position was and it was 4mm out. Down to measuring accuracy and lens FL tolerance I assume. In a single lens you do get divergence of the output beam so some light is lost, 1/Theta.

I realised recently that when I was just plonking the bino-viewers after the PST Mod2 they were not the correct 200mm in terms of focal surface at their field stop behind the re-focus lens from the PST but still got a reasonable image. Now measured as best I can their light path and got them set right.

Whilst setting the 200mm distance for both ends is also required you do need to have the PST collimating lens 200mm inside the best focal surface of the telescope, not just apparently in focus. On a SCT the focal surface is not very flat, the shape of the end of an Americal Football. The eye is not very good and it does processing in real time to adjust the image presented to it to appear to be OK.

The advantage of Rumak Maksutovs is the focal surface is flat and all the colours fall in the little circle across the field in the 'green optics book'. Roland from Astro Physics says as the seeing improves you go from small refractor, bigger SCT and then a bigger Mak to get the best image.

Andrew,
Interesting, but I think you're over thinking the issue.
What do the results look like?

I do not have a SCT.

Its not overthinking. The F10 required for the PST is only available at one fixed point behind the scope back with a moving mirror focusser. And the focal surface is only the best it can be there.

For the C8 Celestron say:


This CN post is interesting and seems to say 100mm for a 2000mm focal length from measurements.

Eddgie said
"An increase of 25mm (over the design back focus, where the published focal lenght is to be found, which is 100mm for all of the Celestron SCTs except the C14, which is 150mm) would then increase the focal lenght to (25 x 3.1) 77.5mm."

Clearly the PST Collimator lens needs to be 200mm in front of the optimal focus point at F10.

This shows you need a very short 2" diagonal on the C8 to have the same quality image as with the old ones supplied with a 1.25" prism.

And means you need to seperate the PST Collimator lens, possibly, and get it inside the body of the SCT by 100mm.
As it is in my Mak180 PST Mod2.
And I suppose the entrance of the PST where the lens was needs to be 100mm from the SCT back.

I tried Christians Vs advice on my 127mm Triplet to auto-collimate the PST axis with the telescope optical axis and it improved the sweet spot.

I am about to do that on my Mak. I have painted the inside of the focusser with some layers of motorcycle pot black to make the 2" nose piece a better fit which has helped.

In SCTs and Maks the fully illuminated field is tiny, about 8mm for my Mak, so you need the sweet spot to be on axis.

Put a tilter infront of the PST. Turn the PST tuner to the left so its not tilted. Take out filters in front of it.

I punched a hole in a Xmas card and made a 6mm black V from it. Stand 20 feet in front of the telescope and look throught the hole with the black V on the front so you can see its reflection. And adjust the tilter till the reflection back off the front of the PST etalon is central. Easier on a refractor. Moving you head up and down and from side to side you can judge if the extinction of the reflection is equal.

Thanks Andrew, your posts on SCT back focus / ideal focal position are interesting. I remember reading similar things way in the distant past. It certainly gives food for thought on increasing performance from SCT PST mods.

It would be quite easy to mount the PST collimating lens in a 1.25" 'extension' tube ahead of the etalon and within the body of the SCT. This would put the etalon at the point of least aberrations. Of Course, it will work without extending the collimator lens out in this way but at the expense of more aberrations and smaller sweetspot.

If the collimator lens is put straight on the visual back on the SCT then the beam it in working with is only 10mm in diameter, this is less than the full 20mm aperture of the PST etalon optics and, as a result sweet spot will be proportionally smaller. Mounting the collimator lens as described above means it and the etalon intercept a 20mm diameter beam with proportionally larger sweetspot.

I have posted temperatures in the MAK180. I have polished the holder in front of the PST Collimating lens now and need to check temperatures again for the lens and 35nm holder. With the right slope the rejected energy could be directed through the corrector only. Clear glass does not absorb much energy especially if anti-reflection coated.

I am thinking of a Roger Macron style aluminium filter protector.

With SCTs and MCTs the issue is the baffling is not really tight so for solar you get stray skylight in the OTA. Thats for marketing on the 'illuminated' field.

I have addressed that in the Vixen VMC110 with custom baffles courtesy of RodAstro. Makes for a darker background.