Do I have a Lunt lemon?

Do I have a Lunt lemon?

I keep seeing other posters' FD images that are sharp and detailed from center to edge. I have been struggling with my Lunt LS100 for nearly a year and have never made a FD image with sharp detail around the solar limb. I have tried "clocking" the camera/blocking filter/etalon with no improvement. I get the same results with both single, and double-stacked etalons. I have sent it back to Lunt twice, and to their credit they have been very patient. I think they just did a general visual check the first time, which did not reveal to them the focus problem I see when I examine images. I sent it back and they did a more thorough tune-up and even sent me a sample image they made when they finished. Although I don't know what all of it means, this is what they say they did: "Centration on the collimator was performed. We removed your collimator from the seal. Measured for centration with run out. Cemented the collimator and let set. After there was no chance of moving for 2 days we later resealed the collimator cavity and those were the results." I finally had a day of sun and made some tests, but still can not make a FD image that is in focus around the limb. It has cost me a couple hundred dollars to ship it to Tucson twice, and actually I am a little embarrassed to contact them again with the same complaint. But I spent a bundle (for me) on this scope an It is simply not performing like everyone else's. Has anyone else struggled with this problem? If so, how have you resolved it? I feel like I have tried everything. Here is a sample image from today. The AR looks sharp, but the limb is soft. 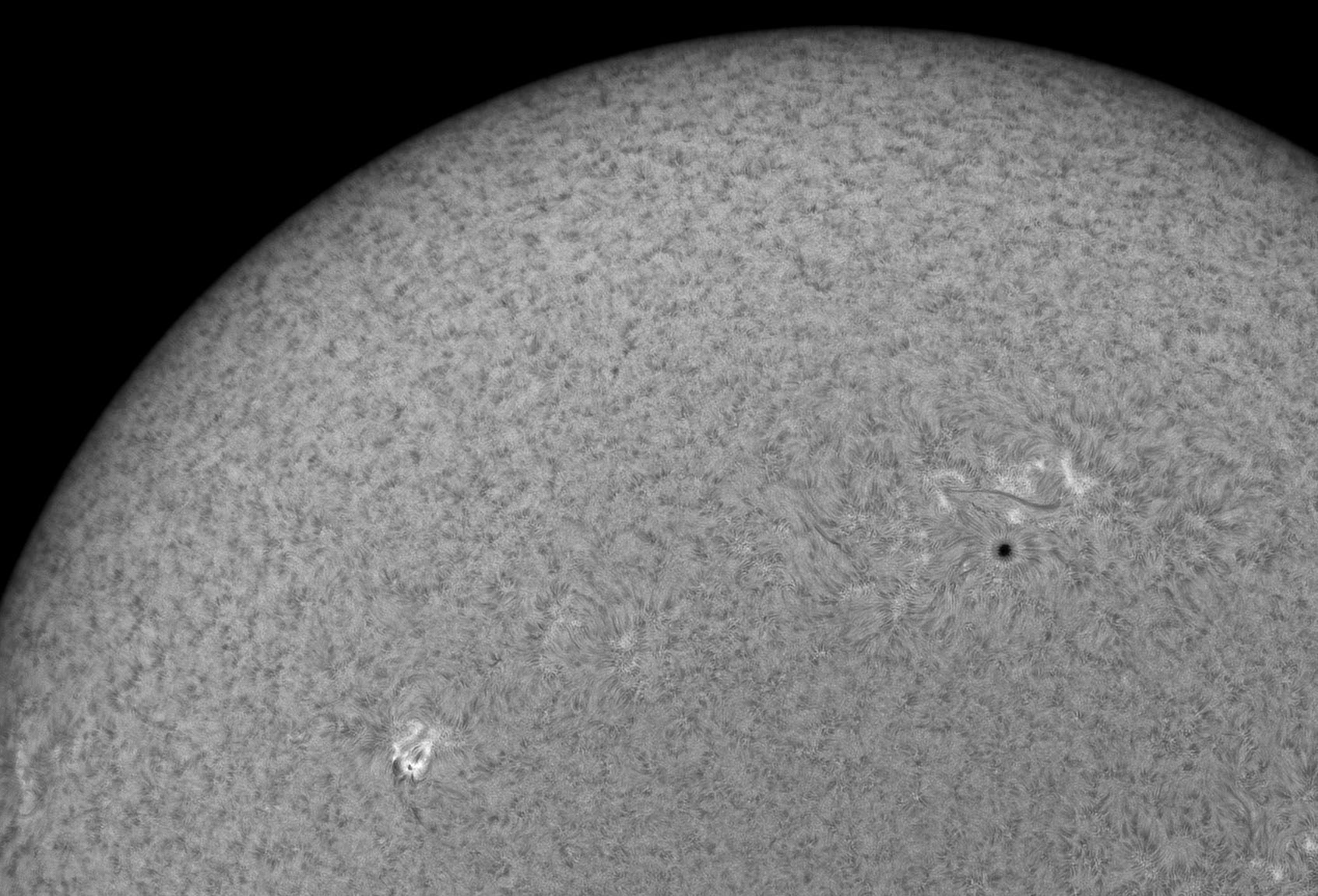 I see what you mean.
Firstly, can you add Lunt's sample image, does this show the same phenomena?
What stacking software do you use and what settings? what I am trying to get at is that if only the AR has been used to do the stacking only that will be in focus. If you use Autostakkert 2 and use say an AP of 30 and it is using the whole disc for stacking then I can see there is a problem.
Do you see this effect visually? do you see this effect on your best single frame?

Sorry, I meant to include Lunt's sample image, so here it is. They said it was a single image, not stacked. it is not as obvious in this image, but I do see the softness along the limb at the bottom of the frame. My image from today was processed with AS!2 AP set to 140 (if I remember correctly) using the entire disc for stacking, and sharpened with Imppg. 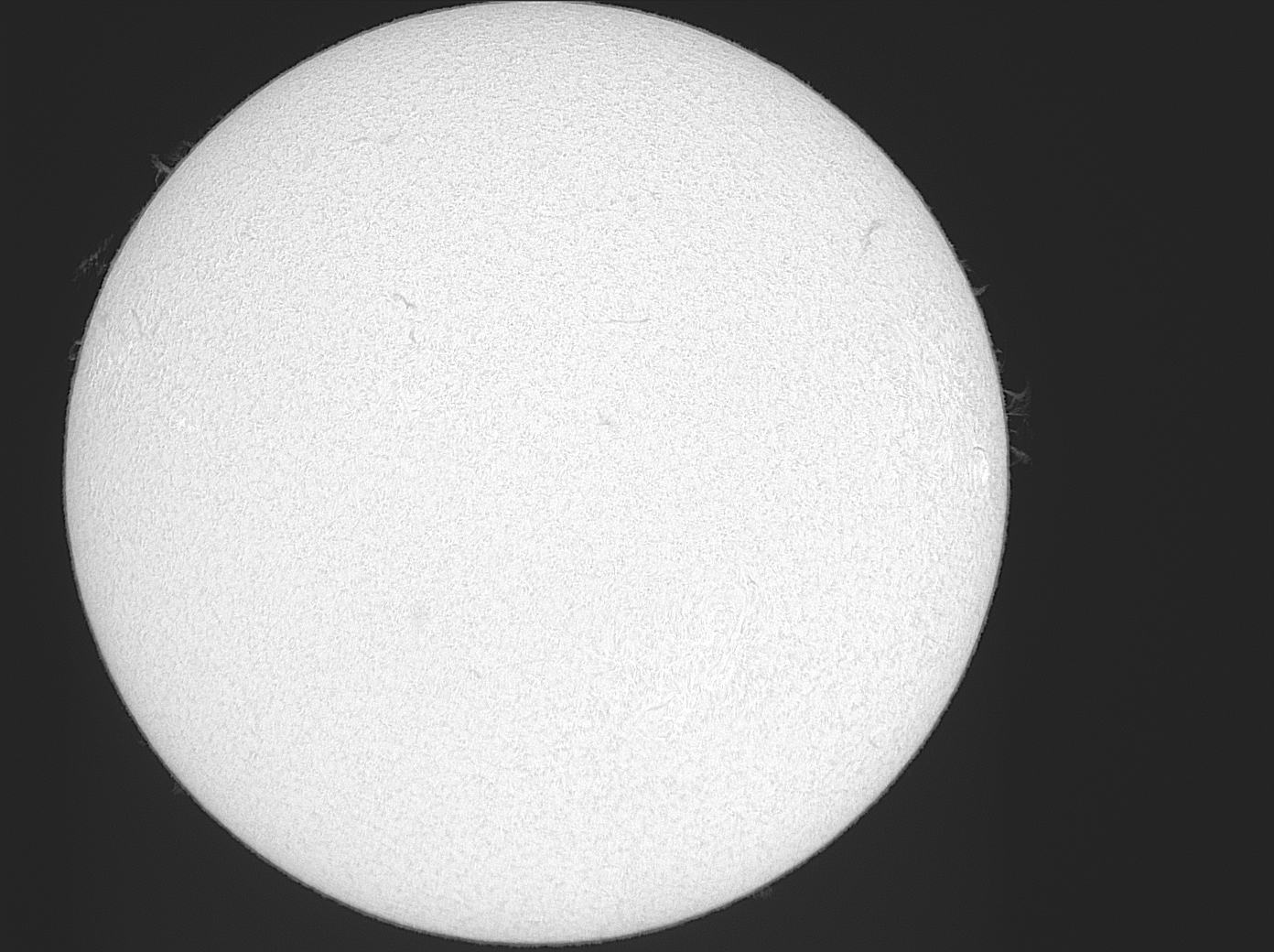 I think it is going off band from corner to corner. It may be a leak in the seal.

Going by the disc detail, your LS100 looks like it's working fine. The issue probably has something to do with the sweetspot, which in my LS100 SS is just slightly bigger than the FD, but is slightly off centre, and when DS, the sweetspot is even smaller. 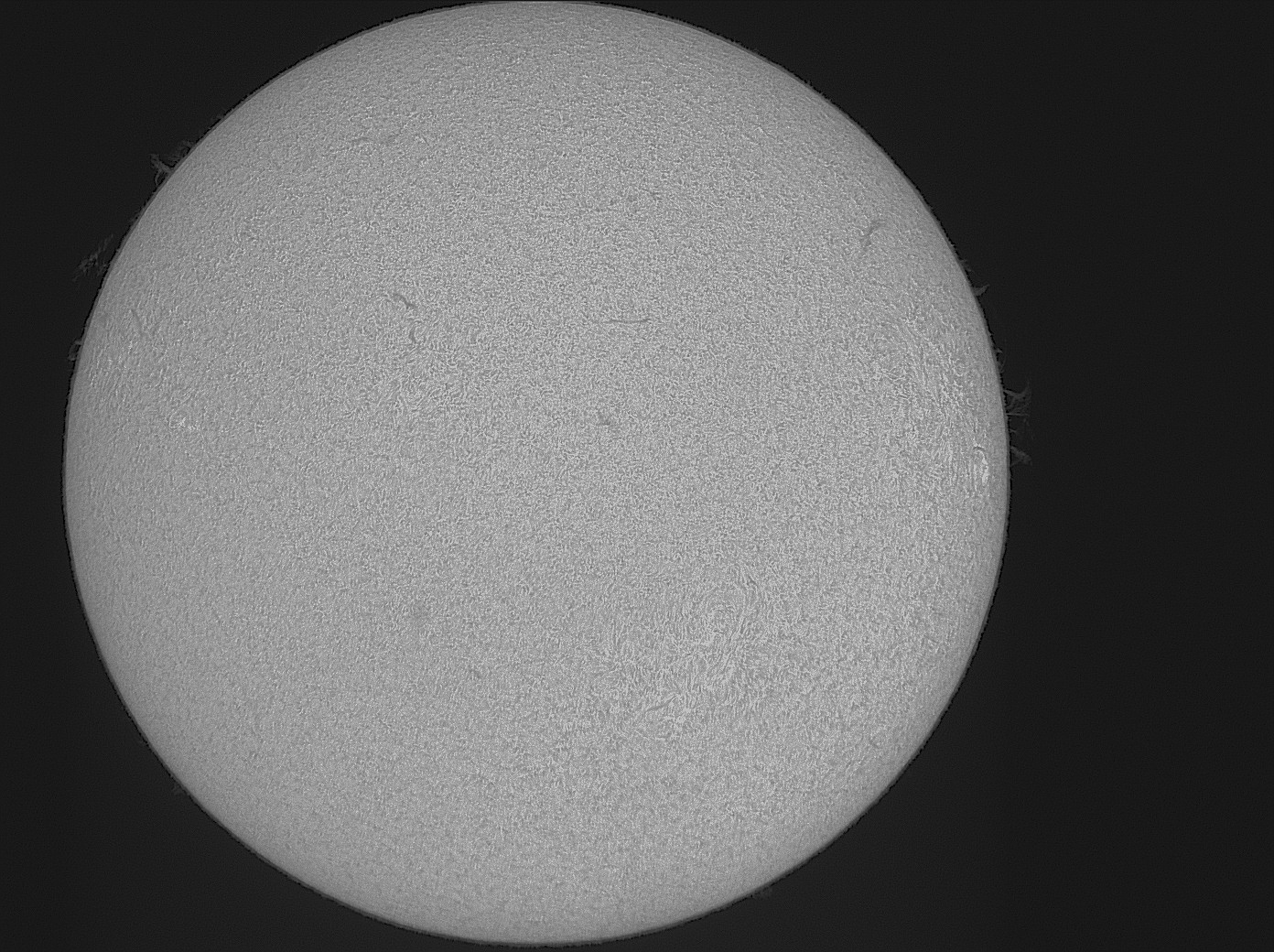 It is single stacked and the contrast uniformity appears pretty good - a slight sweet spot contrast non-uniformity is barely detectable. It does indeed look softer along the bottom edge. This might be due to a camera attachment issue, etc, or misaligned optics - hard to say. But again the contrast is quite good across the disc.

Your image, as Mark notes, is going from on-band in the lower middle-right to off-band in the upper left, and therefore appears to have a much narrower "sweet spot." Not sure a pressure leak would cause a non-uniformity like this. Were you using the DSII double stacking module? As Ivan notes, double stacking any filter will reduce the size of the sweet spot, as the acceptance angle becomes smaller as the FWHM narrows. Double stacking using a second collimator system (versus a front etalon) makes things worse due to added field angle magnification caused by the secondary collimator lens. Tilted filter components are also used to move reflections, and this may exacerbate the sweet spot being a bit off-axis.

But if it is a single stack image (it's labeled singlestx2_26 - ?), then there might be another problem. Was there a large temperature gradient taking place - did you take it from a warm interior location to a cooler exterior location to image? The only other time I have seen something like this is with another large un-obstructed filter system (SolarScope SF100) that had not yet become thermally stable, and the contrast uniformity was quite poor until the filter(s) had stabilized, which sometimes could take up to an hour or more... Once you eliminate all other possibilities (pressure leak, etc.) this might be the cause of a majority of the contrast non-uniformity.

Thank you all for the suggestions. Mark, the allen bolt under the pressure tuner cap is tight. (likewise on the DSII). I wish I knew how Lunt was able to produce an acceptably sharp image with my scope, while I cannot. I am using a ZWO1600 which uses a relatively large sensor, but I cannot imagine that that would make a difference. I used to use a 6mp PGR Grasshopper3 and had poor results with it too. I am a professional photojournalist and familiar with making images using a wide range of equipment under all kinds of circumstances. This is my first solar scope, however, and I just want to know if I am expecting too much, or if this is just the way it goes with this specialized instrument. I may just have to swallow my pride and call Lunt again.
In any case, thanks for all the support here.

That's one thing less then. I wonder if the objective is seated squarely? Maybe just try and slacken the retaining ring on it by something like 5-10 degrees, maybe it is being pinched off the orthogonal.

Now I am wondering if my Lunt is ok as well? How can you tell if it's a focusing issue or an issue with the actual scope itself though?!

Maybe field curvature, what is the sensor size ?