I have thought about getting the Orion Solar Starseeker mount. It looks similar.

Looks to be the same thing just badged different...

All,
I plan to get a new mount/tripod assembly in the near future. I am considering the Orion Solar Starseeker mount for solar and the regular Orion Starseeker GoTo Or Celestron NextStar mount for nighttime use. All are under 500 dollars US. Does anyone make one like these that will track all three lunar, solar and sidereal? On many nighttime mounts like the NextStar three objects have to be located and entered to align the scope. That's not possible during the day. The solar mounts do this by locking onto the sun but a multi-use GoTo mount would have not enough objects to go through the setup process in the daytime. Unless maybe it is GPS equipped and can use that standalone. I would like a tracking mount for my Coronado SolarMax II DS and Orion 70mm White Light Solarscope. And my nighttime use Astro-Tech 72EDII refractor. Must I buy two different mounts?

The SkyWatcher SolarQuest looks very similar to the Orion StarSeeker mount. They may indeed be the same.

Nowadays, most mounts have a solar tracking option within their software/firmware. I have a few mounts, but my process (for solar work) is pretty much the same for every single one:

- Put down the mount and make sure it's roughly pointing north (I'm not very precise on this, just a rough visual estimate) and set the latitude on the scale/dial (whatever you call that) if it's an eq one.
- Skip any sort of alignment procedure in its totality.
- Tell the mount to slew to where it thinks the sun is (this will be a bit off usually). Correct it by manually slewing until I have the sun centered in my eyepiece/camera and confirm.
- Enable solar tracking in the firmware.
- All done.

Thanks Jochen. Which mounts do you have? I don't rule out an equatorial mount but am eyeing altaz for simplicity.

DeepSolar64 wrote: ↑
Thu Mar 19, 2020 3:28 pm
Thanks Jochen. Which mounts do you have? I don't rule out an equatorial mount but am eyeing altaz for simplicity.

I have the following ones:

But for solar work only, an alt-az is usually more than sufficient (assuming it's stable and can carry the weight etc obviously).

I have been looking at the SkyWatcher AZ-GTi. Does it have both solar and sidereal capability?

It has sidereal, solar and lunar tracking.

Does it work well for you on all three? Is it easy to align and set up?

I've only ever used it for solar/lunar work.

I always just slew to the sun/moon manually, enable the relevant tracking mode and do my thing, so I can't really say much about the alignment process. Once it's on target, it tracks very well for longer periods of time though.

DeepSolar64 wrote: ↑
Thu Mar 19, 2020 4:10 pm
I have been looking at the SkyWatcher AZ-GTi. Does it have both solar and sidereal capability?

Yes, it has solar and sidereal capability.

I have one. Personally, I don't get on with it. I bought it because I wanted something that would cater for the couple of times a year when I take a small scope to a dark sky, but for the rest of the time solar.

I don't like using my phone as the hand controller for it, so I bought the skywatcher handset for it. You can't do solar with the handset for whatever reason. I've just found myself swearing at it and packing it away when I get it out. I'm just going to get the solarquest version instead.

I always just slew to the sun/moon manually, enable the relevant tracking mode and do my thing, so I can't really say much about the alignment process. Once it's on target, it tracks very well for longer periods of time though.

Maybe I need to try this!

Mark , I too have the AZGTi, I might as well use it as a doorstop, mainly due to the absence of an ST4 guide port. If someone ever comes up with an ST4
interface that could plug into the handset port, then that would be a real game changer. We could then use our solar auto guiders and have a great portable mount.

Thanks Jochen, Mark and Martin. I would use it mainly for visual so my demands would probably be less. But is would still need to be easy to use and have decent tracking and GoTo capability. I have 4 scopes to use with it, the Orion ST90 being the largest. But it is actually a tad bit lighter than my double-stacked SolarMax II 60.

James , just take note the Solarquest and AZGTi have a payload of 5kg max. The supplied tripod with a 5kg load is top heavy. I would be wary of mounting an expensive telescope on this tripod.

I made a heavy duty pier mount for mine. 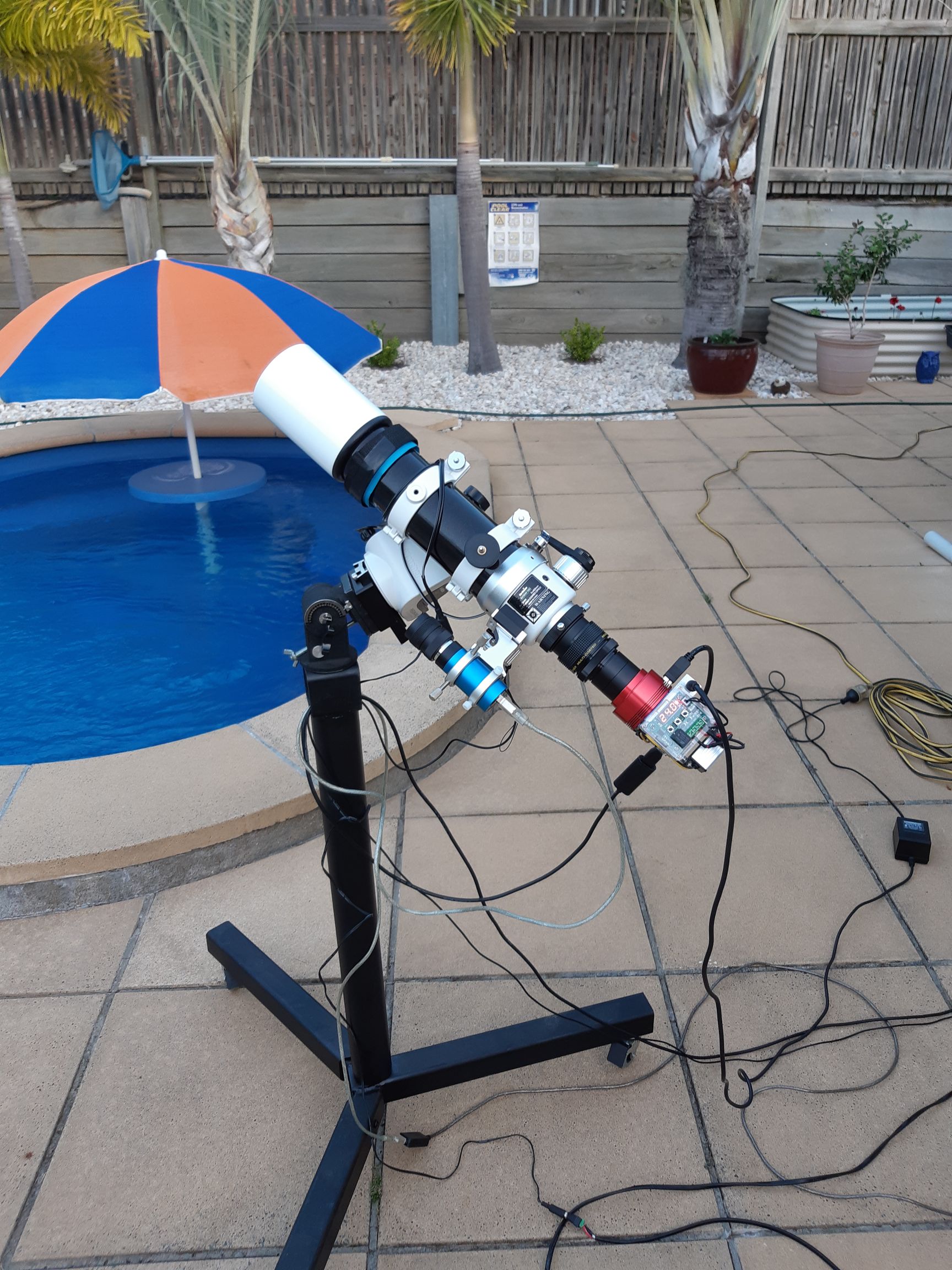 Thank you for the advice Martin. Your home-built pier does look very stable.

Sorry I’m late responding to this.
I have been using this mount for about six months with an L bracket carrying a PST and a shelyak spectrograph.
It works perfectly every time, automatically finds and tracks the sun, and with a metal L bracket holds up the payload very securely.

I sure could use one of these with my SMII60 and new ZWO camera. Certainly on my “ to get “ list. Either it or the SW AZGTI.

I've been using mine with no problems for a good length of time now, an excellent little solar mount that tracks really well, for hours, and always auto finds the sun quickly and accurately for me at the start of a session. Definitely needs a better tripod, but at the price point that isn't unexpected. I use mine on a decent camera tripod with 3/8ths thread, with some extra weight hanging underneath the tripod to stop it tipping over since it carries some gear that is worth a bit. It carries a Coronado SM60 II DS just fine for me, or an ED80 with a Quark. It's one real letdown is that they didn't give it an Eq/wedge option so we could use it without field rotation for timelapse animation captures of prom and active area etc changes over a few hours. It tracks well enough for that for me but can't be used for it due to the Alt/Az field rotation. Other than that small frustration I'm finding it a very compact, reliable, accurate, and simple to use mount that without fuss just does what it says on the tin.

Image (inverted) captured a few days ago using it with the ED80/Quark combination. 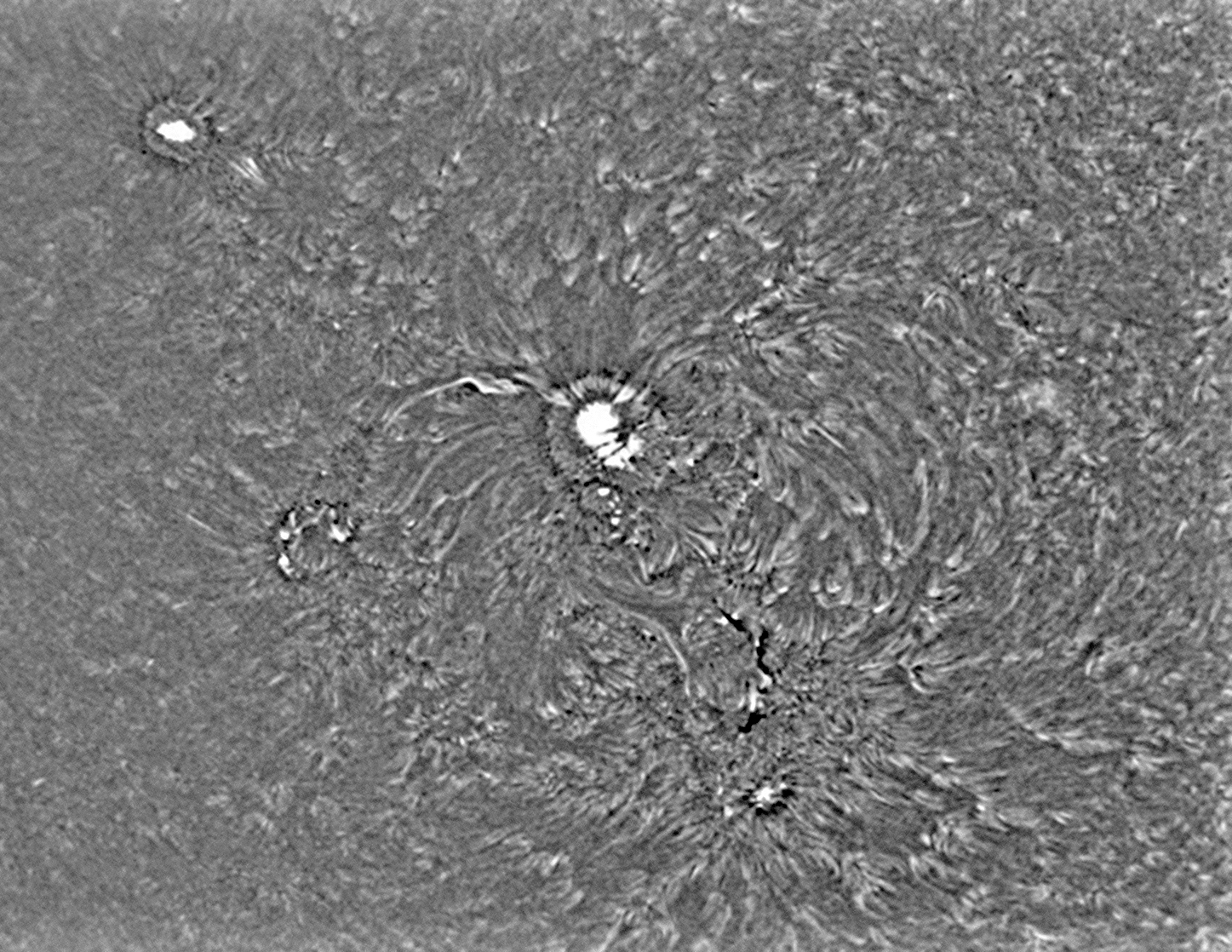