I picked up a wee double stacked PST. It's a standard PST with newer components (the blue element, brand new ITF) and a Solarmax 40mm II module that threads on the front without any special adapter. As advised by others, I first tuned the PST etalon itself without the SM40II installed, for best contrast and to be on band. Then I put on the SM40II and I used it visually and with camera to use the tilt mechanism to move the reflection off the disc and then did the final tuning. Seems to line up and worked. Visually it's much improved. I can see surface contrast no problem, the current AR2738 looks fantastic in the eyepiece, high contrast, the plages are bright, the fibril bundles are obvious and I can see prominences on the limb at the same time. So visually it's lovely to look through, nice and bright, and that's with a 13mm plossl for a full disc FOV.

My main thing I'd like to learn to tweak is imaging with it. Imaging is a different animal from visual. Visually I don't see a sweet spot. But imaging, I seem to see a sweet spot with gradients that have it fall off band in some areas and it loses detail. Also, it always seems to be rather soft. And even when I image with no gain at all, and stack a lot, there seems to be apparent noise of some kind.

Things I'm having trouble with: 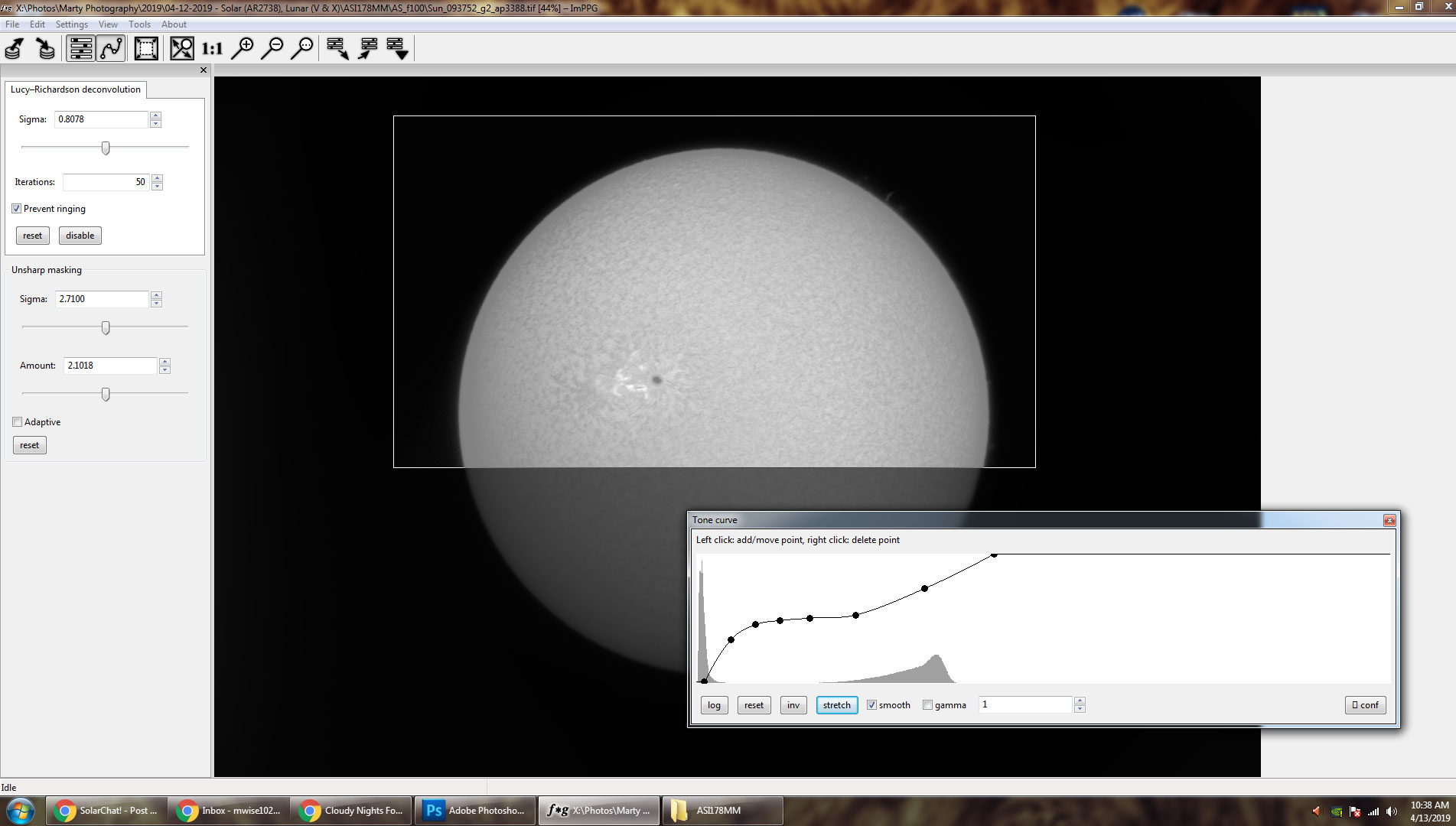 Here's how the disc is with no flat calibration (to show the hot spot, sweet spot, etc): Here's processing out the gradients without flat calibration: Here's the flat calibrated disc, lifting proms (100 frames stacked) with the ring around the disc: Trying to see if I can do a lot better than this (which I do NOT like the glow... ugh): Trying to figure this out. Maybe my equipment is just too low of quality to continue with this. If I cannot get this to work with full discs with one shot and process from it, I may switch to something else. Was simply seeing how much could be done with a PST like this.

Two RAW files attached (right click and open in new window or save, they're around 6~7Mb) if you want to inspect them. Did you check the pentaprism? Is it aligned properly? Visual it is a bit less crucial than when imaging.

I have not checked the prism. I should do that! Is there a sure fire way to know it's not aligned?

Top of the prism should be parallel to the top of the black box. Just open it up, it is pretty straightforward.

I'll check it out!

I opened the black box to see the pentaprism.

It seems ok? Doesn't look grossly out of alignment? 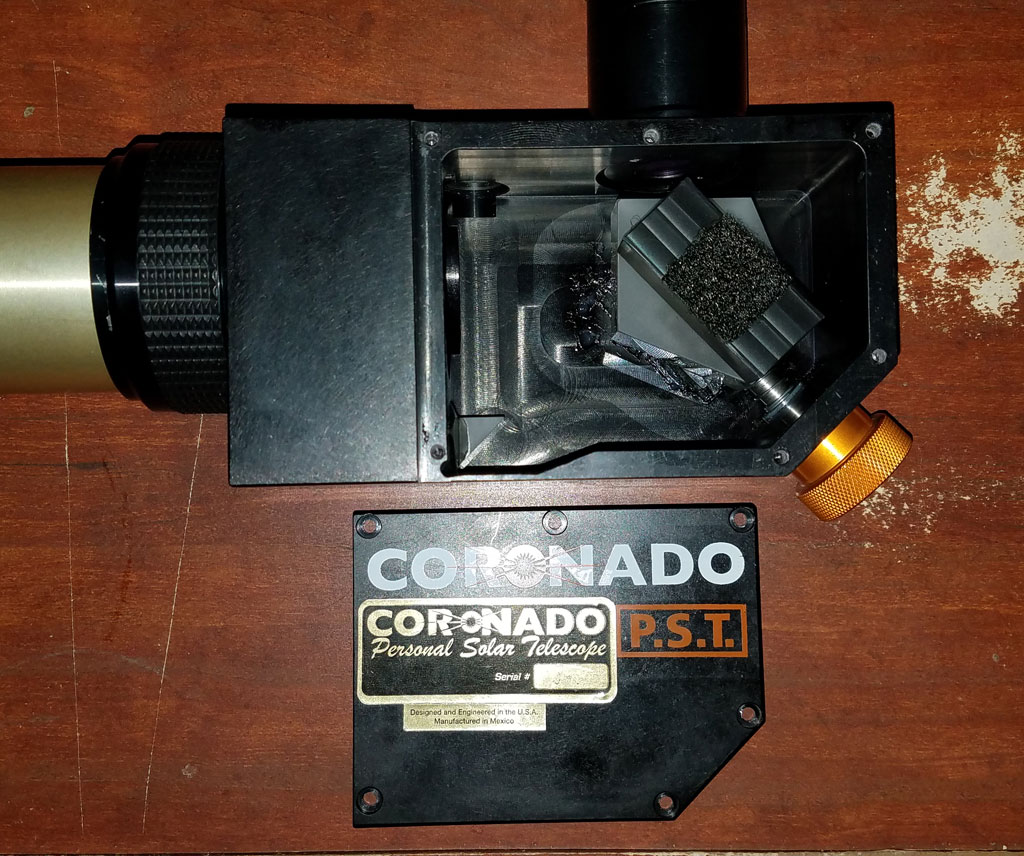 What's the hotspot like without the ds unit Marty?

There's the PST etalon on its own. I did not flat calibrate. Forgive the dust, I've cleaned it since then. With the SM40II you can see the bottom left of the sphere is void of detail. The rest of it looks ok. The limb is not great anywhere. The PST etalon on its own seems to not have as bad of an issue. Combined, well, the above.

You've got excessive tilt on that front etalon, thats what is causing the uneven illumination. The PST on its own looks good. Twiddling and tweaking the external should get you closer to a more even illumination.

I tilted it enough to get the reflection off the disc. But maybe I went too far with it, and it is tilted off in that direction. I'll try and get the reflection closer to the disc without clipping proms and see if it helps that area.

I would try the SM40 on its own on another small refractor. Leave the tilt alone (e.g. no tilt) and use the Richview only (compression - tightening) to tune the etalon.

Minimum tilt is the key.

You can adjust the pin on the richview tuner, might give you more tuning range.

Bob Yoesle wrote: ↑Sun Apr 14, 2019 3:20 am I would try the SM40 on its own on another small refractor. Leave the tilt alone (e.g. no tilt) and use the Richview only (compression - tightening) to tune the etalon.

Thanks Bob, I will try if if I can. I don't have something to adapt the SM40 to my ST80 to test (nor an additional blocking filter, other than the PST black box itself). I have adapters for PST mod of course. So maybe I could try something there?

Also, the SM40 doesn't have collimating lenses right? Does this matter for testing on its own?

Great info on the tilt and shifting, thanks!

Yessir! I hope so!

Thanks, I'll check that out too!

Now it's totally cloudy for 2 days in a row.... naturally!

Marty, I would be very careful about compression Richview tuning.

1) The DS etslons sometimes are farther to the red wing, and may require more compression to come on-hand with no tilt. 2) Going to the blue wing could apply too much pressure, stressing or fracturing the ERF (there are no collimating or refocusing lenses - a central pin on the ERF applies the pressure to the central spacer of the etalon).

Marty, I am very interested in how you resolve this issue as I recently purchased similar equipment. I have not yet been able to capture proms and disk with a single exposure to my satisfaction. Uneven luminosity has been problematic as well. Seems like I spend more time tweaking and tuning than I do imaging not to mention post processing.

One thing I noticed regarding your image is the tone curve settings. There is a relatively flat (horizontal) region which will eliminate contrast and detail. See if it corresponds with the region you are concerned about.

I have found that minimum tilting, to move the secondary image, of the SME40 is better for illumination. It also seems to work in conjunction with the PST etalon tuning as to position, but that might be the rather sloppy adjustment of my PST.

As a test I deliberately adjusted both etalons to the red, minimum tilt and noticed better illumination. The reflection was still off disk. This presented another question but confirms the relationship between tilt and illumination somewhat.

Let us know how it goes, 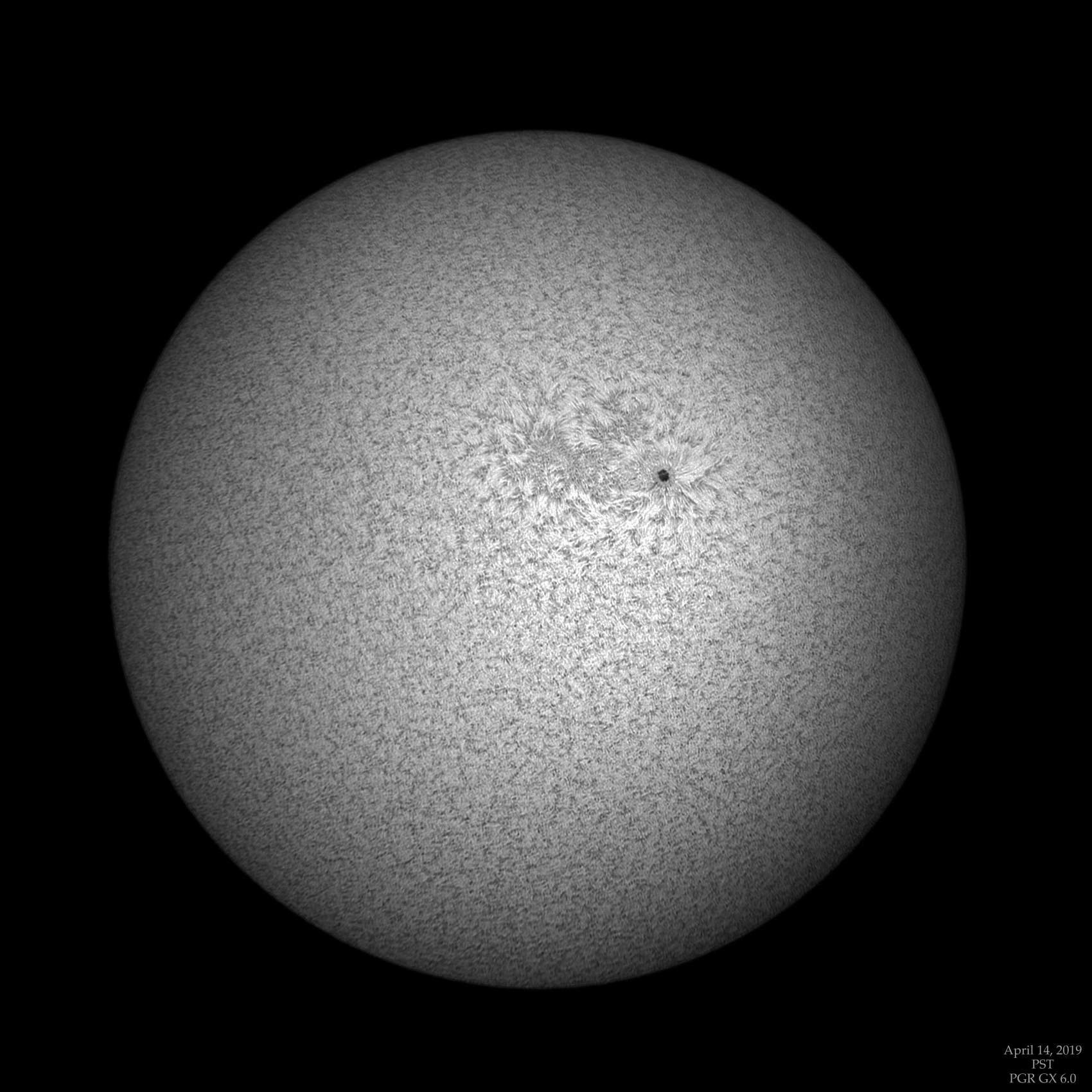 I was able to test some more today.

I pushed the tilt as close to the disc as possible without overlapping the limb.
I re-tuned the primary etalon & external etalon again to. I still do not have a uniform cover of the disc unfortunately. I think its a little better. The limb is better, and I think the two etalons are on band together as there's no hint of double limb really, it's just soft though. The filaments and plages were high contrast so I figured I'm on band via those and then looked at the limb and saw no double limb so maybe this part is at least right now.

I'm still having issues though.

You aint far off there Marty. Try the positioning of the solar disk in the frame when you image now, my money is get the disk on the right hand side of the frame and the illumination and tuning will all balance out. I'd probably just try and squeeze that reflection a little further to the left of the disk too.

Thanks Mark, will try that on the next session!