by grimble_cornet
As explained in a previous post, I spent some time yesterday comparing results obtained with a Lunt100 T Ha scope double stacked with a Quark Chromosphere to those from a Lyra152 f5.9 plus Quark.

Seeing was less than ideal so neither setup was performing anywhere near its potential:
[url=https://flic.kr/p/EZ3xcW][img]http ... .gif[/img]Seeing by Mike Garbett, on Flickr[/url]


Another complication is the different fov given by each combination.
However, for what its worth, here are some comparisons - click on image to get full size versions: 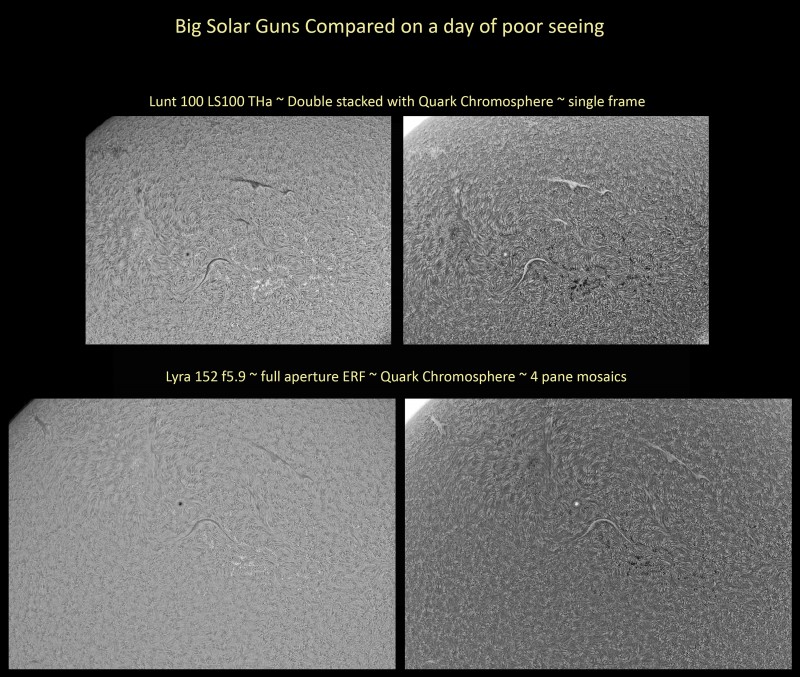 The LS100 plus Quark image is a single 1280x960 frame whereas the Lyra152 plus Quark images are 4-pane mosaics. All were taken with a x0.5 focal reducer between the Quark and camera plus a second x0.5 reducer on the Quark's nose.

Here is a single frame from the Lyra152 plus Quark showing the large prom on view yesterday: 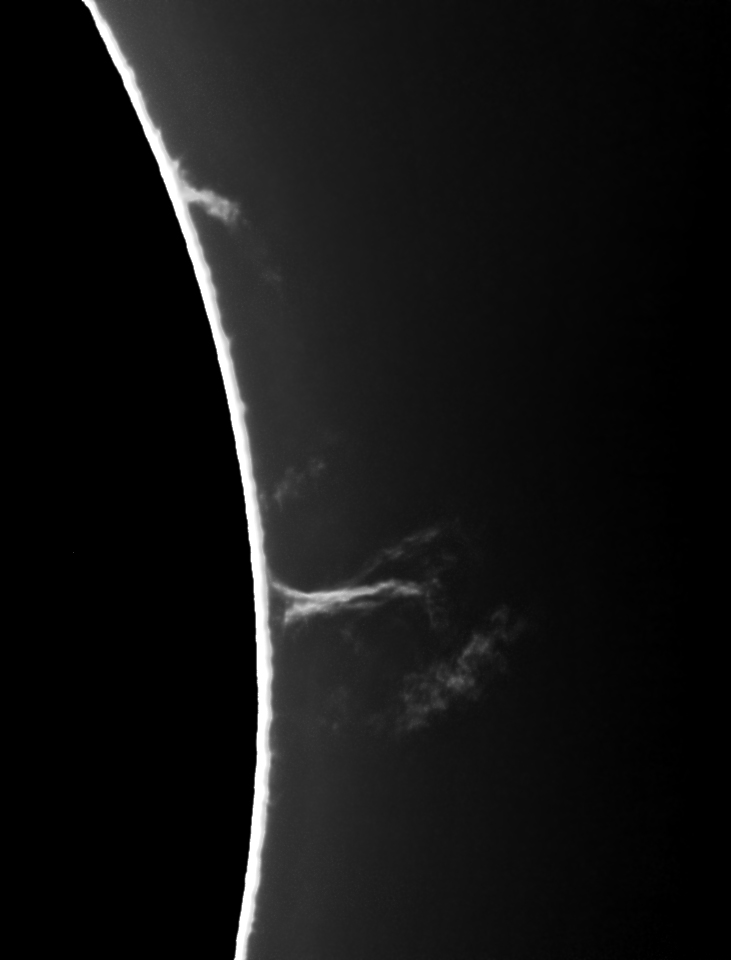 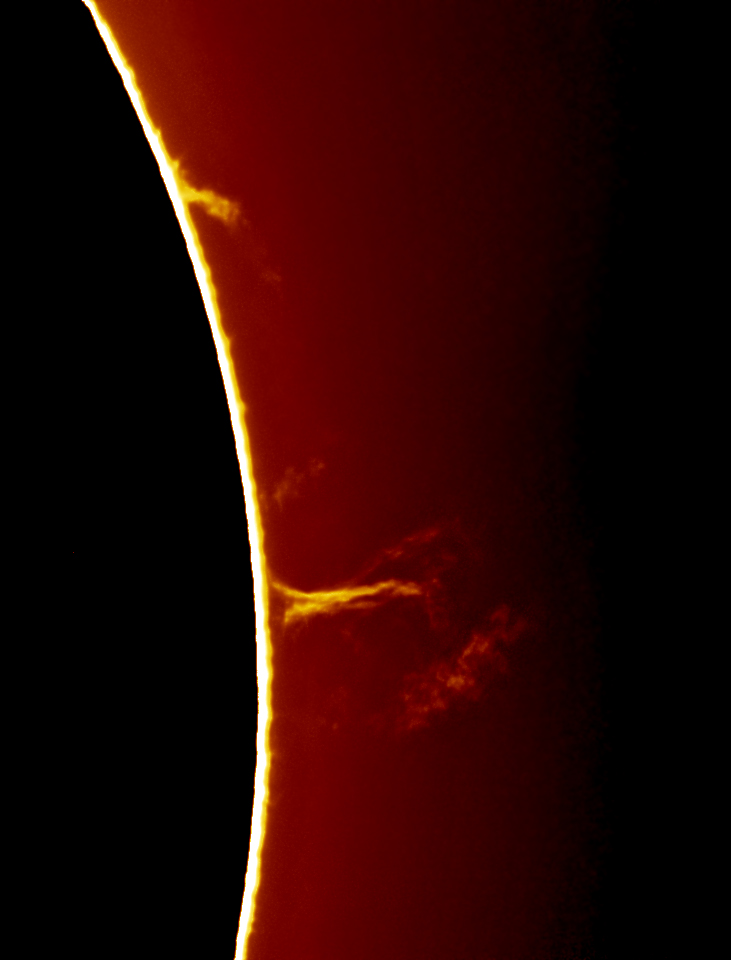 Clearly some potential but the lack of any detail in the spicule layer shows the limitation of the poor seeing - it is crystal clear in this combination under good conditions.

by marktownley
A good shoot out Mike! When there is detail in the spicule layer you know the seeing is good round here in the wet midlands...

by Carbon60
Good comparison, Mike. What conclusions do you draw from these results?

by grimble_cornet
Hi Stu. It's difficult to conclude anything with confidence when conditions were seriously limiting performance.
However; I was pleased that the Lyra152 fitted with a full aperture Baader ERF produced very clean images with nice 3D effects.
I was also pleased that the coupling system and focal reducer arrangement I am now using seems to work quite well as a DS system for the LS100.
Looking forward to trying another shoot-out in better conditions when I can resolve the spicule layer.

Found you here as well

Am I right when I say the Lyra152 is a much cheaper option?

by Derek Klepp
Thanks Mike I have similar setups aperture wise but use an internal ERF. I use the Lunt most as I just find it quicker to setup ang go .I am usually tired after work so try to have a quick run.Visually however I definitely see the difference in resolution with the larger set up.Look foward to more as your summer rolls in.

I agree that the extra aperture seems to win out (as Valery predicted last year when he said that the 152mm plus Quark would blow away the LS100) but I think the situation is a bit more complex than is obvious at first glance.

I find the LS100 to be incredibly sensitive to seeing conditions; low sun, slight haze, turbulent seeing - any of these and I might as well just leave the LS100 in the box as I can see far more with my SM40 or 60mm plus Quark

Derek has expressed surprise at this several times so I don't know if I have a 'lemon' or UK conditions are so much worse than anything you get in Australia. I don't think its a 'lemon' as views are crystal clear with that unmistakeable Lunt 'etched' look - but only on a few days each year which is frustrating to put it mildly

By comparison, the Lyra152 is much more forgiving and will produce pretty good results in mediocre conditions - as we had on Monday - and this needs to be considered when comparing the results shown above

by zorgdotnl
Hi Mike, is jour ITF OK? I can get sharp and images with my LS100 with cirrus.

by grimble_cornet
Not sure; I would hope so as the scope has had very little use (probably less than 10 hours in the 12 months from new) but I don't really know how to check? The 'filters' at each end of the diagonal look 'clean' but obviously I can't see through them without disassembly which I don't know how to do safely.

This is what I get with the LS100 in mediocre conditions (Monday of this week): Compare to the LS100 double stacked with the Quark: And this is what I was getting from the LS100 alone in slightly better conditions last summer: 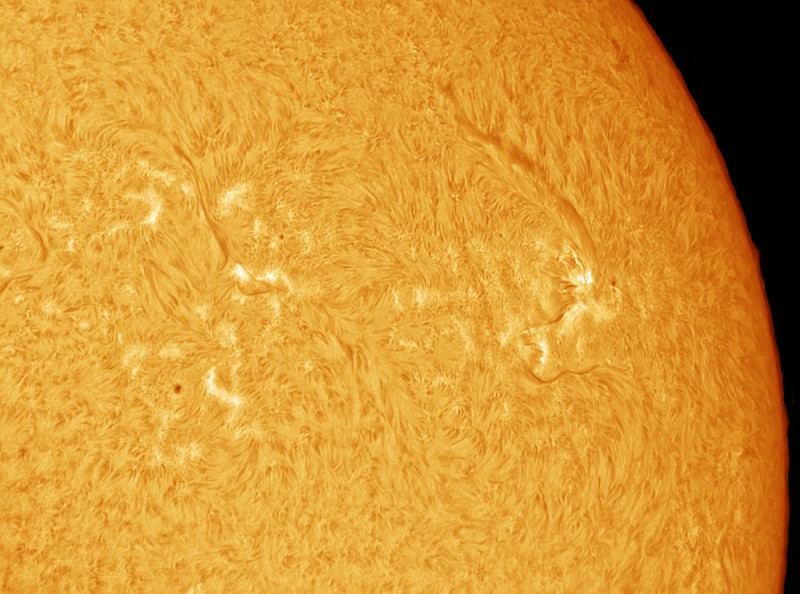 by marktownley
Nice additions Mike. I'm happy to take a look at it, I got quite a bit of use out of Walters LS100 so have a reference point of sorts. I was thinking about the ITF myself, another possibility could be pinched optics; may just back off the retaining ring in the lens cell, it could be too tight. I had this with my SM40 way back when...

by grimble_cornet
Willing to try anything at the moment mate cos its seeming more like an expensive paperweight every time I use it.

I had exactly the same experience when it arrived last Winter with very disappointing views and even worse images. I was told to 'put it away until the Spring when the sun is high' by several people on here and they were right. In good conditions it was awesome but as soon as the Autumn arrived with a bit of haze and turbulence it was back to 'hopeless' again.

In contrast; you may remember how impressed we were with the Lyra 152 when we gave it its first light in pretty dodgy conditions? It seems that the Lyra plus Quark (especially now I've got the full aperture ERF) just makes the LS100 redundant as it seriously out performs it in any conditions!
Walter did advise me to 'point the LS100 at the sun for 30 minutes before imaging' ......... to 'warm it up' and he was right but, it still disappoints in anything less than 'good' conditions.

by zorgdotnl
Yes Walter was right also with the warm up time (15' to 30'). By the way, the first version of the LS 100 (the one with black lens cell and F/8 achromat lens) wasn't as good as the current version (red lens cell an ED F/100 lens). Which version do you have with which BF? I ask you this because it appeared that I had at first observed with the first version, with a long version of the feathertouch and a BF 3400 inside. It appeared that the BF was way too close to the FP, vigneting the light cone and giving poor images (adding up with a miscollimated sytem, but that's another story).
Mark is right about the collimation also. As defects add up, everything you can eliminate is good. I think that diffusion from the sky is a good test to distinguish good optical systems from lesser ones. My criteria for going to observe in Ha when there are clouds is can I see my own shadow? If yes, I always have a good image, of course it gets better if the sky is perfect

You can check the ITF with a super strong led light: cloudy or not?
Now with a perfect optic, very bad seeing can kill the image: I look for whatever warm air source can affect the lightpath, walls, trees, houses...

by grimble_cornet
This is my LS100 with the Red Lens Cell. It was ordered in August 2014 and delivered in November 2014. It has the B1800 blocking filter. I have just looked at a very bright light bulb through the blocking filter diagonal and, as far as I can tell, it seems perfectly clear.

by T McVicar
Curious how you report better views with the larger aperture Lyra in poorer seeing.

That alone lets me think there may be an issue with the LS100mm, but I am not an expert.

by T McVicar
I like the images it produces though. Nice presentation here. Cheers

by marktownley
Same as Walters. Check the red lens cell isn't cross threaded onto the tube, it just screws on.

by Derek Klepp
Mike get Mark to lend a hand if and when time permits.Shame we are not closer would be good to compare my older model which I have replaced the blocking filter glass in the B1800.I simply find it my best scope night or day .Mind you I am 30m above sea level in a rural setting on a small hill and temps are generally around 28C or higher in Summer and down to 15 in Winter and I hardly ever touch the PT once I have it on band.
Cheers Derek

by GUS
Mike, there have been a few others with a similar issue, a thread on one of the Lunt yahoo sites mentions about issues with the blocking filter mirror in cold temps(pinched) and a thread on cloudy nights describes an issue the OP was having with loss of detail in his LS80 in cold temps and how he used a dew heater around his BF to get detail back. I use a Coronado BF when my Lunt BF shows no detail, and it works perfectly. I have no issues with the Lunt BF in summer.

by george9
Hi, all. I just stumbled on this thread. It was my CN cold-temp post. My old Coronado (ASP60 DS) was only really usable above 50 F and I never figured out why. With my LS80 DSII B1800, above 50F was great, 30-50F was fine but you could detect a loss, and below 30F really lost detail. I lived with the problem for two years because I was so happy with the improvement. Then I realized it was time to figure this out, especially after going over my old emails with David Lunt about the cold effect. Heating the etalons would be a pain, but I just tried the blocking filter and it worked perfectly. I really don't see any loss any more down to about 22F that I have tested it. Just a 3" dew heater from a 12v battery. I didn't think it would be strong enough (dew heaters only need to raise the temperature a few degrees), but 5-10W seems to cover it. George

If I understand your setup correctly; your 152 is using the full Ap ERF while the Lunt is using the internal (stock) ERF...is this correct?

In my experience adding the 160mm D-ERF to my LS152 allows it to perform surprisingly well in poor seeing conditions...it should be easy enough for you to test

FWIW I also had an issue with my Lunt not working when the system was cold...however in my case cold was anything under 75F! As long as I let the scope sit in direct sunlight for 20-30 min it would start to work as expected...I had previously cleaned the blue glass in my 34mm blocker but it did not help...so I eventually replaced the blue glass and the problem was solved.

by grimble_cornet
Fascinating stuff guys.
Derek; I don't need to adjust the PT in warm weather either but.....
My LS100 certainly feels the cold - below about 10 degrees C /50F I have never seen any real detail. I have a load of dew heater tapes which I use for 'sissy astronomy' as Stephen would say so........ easy to test that theory once I get some sun.
The 160mm Baader ERF may well be improving things on the 152mm scope but when Mark and I first tried it out, we were using a small internal ERF and it performed very well in poor seeing.
I'll check for cross threading etc but don't think it would produce good results with the Quark if there was a problem.......or have performed so well last summer as nothing has been changed since then.
All times are UTC
Page 1 of 2