A ZWO ASI 178 with an odd artifact

A ZWO ASI 178 with an odd artifact

I looked at ZWO's camera lineup after getting my ASI1600 and saw a camera that had some interesting features - an ASI178 with a 6MP, 1/2" sensor with a decent frame rate, and a low price. I ordered one and started using it as soon as it arrived.

What I saw, frankly, shocked me. It wasn't the image quality but rather a lattice pattern that covered the entire screen which almost seemed to me to be a reflection of the photosites on the sensor off the back part of the protective window. I wrote to the supplier and the response to them from ZWO was that every camera has this pattern to some extent and that I should try raising the gamma to 50
(but no higher). I tend to use the lowest gamma I can(zero if possible), especially for surface features for increased contrast. I'v never seen this effect in any camera I'v ever used including ones from ZWO.

I'm not making any judgment yet until I follow the suggestion but I don't like the idea of this pattern lurking over image details.

Has anyone (especially 178 owners) had this experience and maybe suggest where the pattern comes from and suggest solutions? 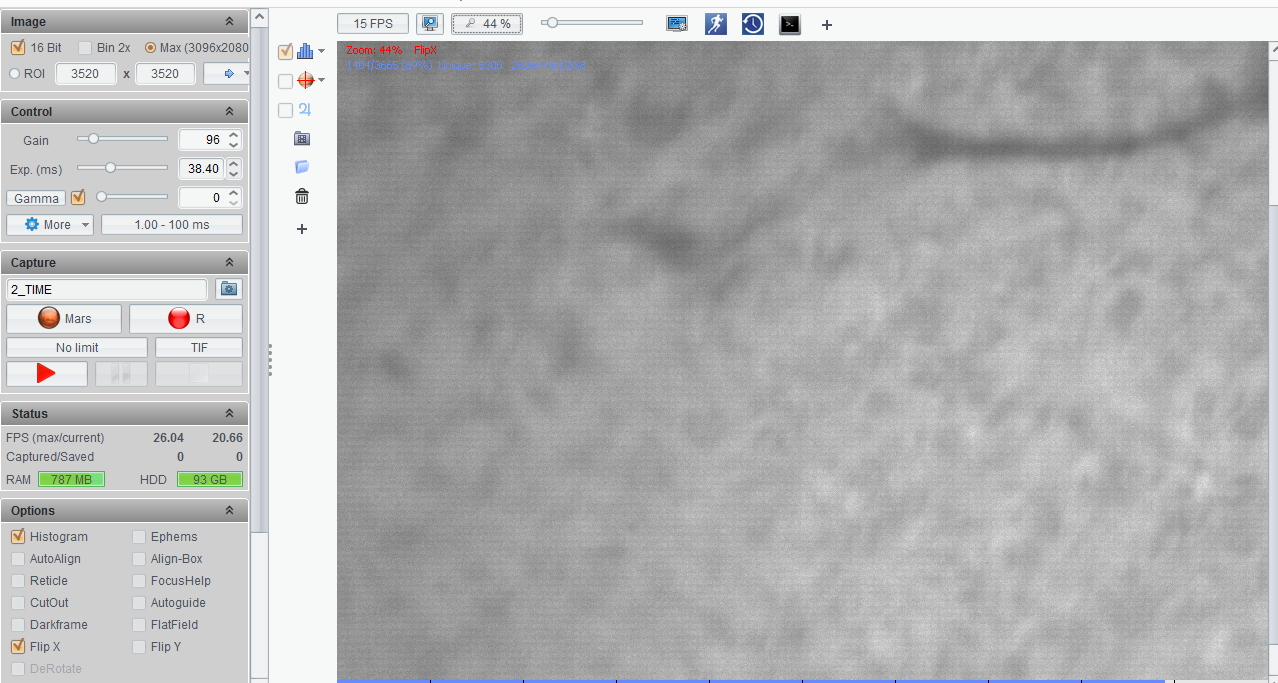 Lou, I have the same camera and got exactly the same effect. I wish i could remember the circumstances, because I tried it only twice and that was about three months ago, and I noticed that it was worse in some instances. I was going to try it again with a reducer, because I had the impression that it would help matters.

Later Edit: Also, now that i think about it, maybe using a flat would work?

I can see where ZWO's suggestion to raise the gamma to 50 would lessen the effect but, in solar imaging, where we value initial contrast in an image, this partial "solution" is a step back. This is the first time I've seen this effect.

My experience is that all ZWO cameras have this artefact. Some are not as pronounced as the one you have. I have a ZWO120MM and a ZWO174MM

Its true Pedro that i occasionally see it on the 174MM, but nowhere near as bad as I did with the 178MM. Again, I wonder whether a flat would help.

Did some quick testing. (Varying weather conditions not very helpfull)
Tested with and without focal reducer. No difference. Pattern visible.
Gamma 1 and 50. Pattern visible but more clearly at gamma 1. (Probably if you do postprocessing it will become more visible with Gamma 50 as well)
Think I used a flat last week, and that did not really help either.

But very strange: did a test on a "normal" subject in white light with different settings. And also fairlu big patches of "grey". Unable to reproduce the problem. Is this only visible in monochromatic light?

Looks like that Sony CMOS chip is not the best in world. Wonder if QHY cameras with tha IMX178 sensor have the same problem.

Wow Paul. I guess I was optimistic on that score. Maybe the manufacturer needs to be alerted from multiple customers.

done some further reading but my knowledge on sampling, filters, aliasing ... is just not strong enough to understand everything. Start to suspect wavelengt and pixelsize might have to do something with it. Looks like some interference or moiré pattern. Sometimes if you zoom in on the image you really start seeing it like huge newton rings, but in "lovely" squares.

Was able to do short testing with the ASI-120 but could not see anything like that. (Though playing heavily wit exposure/gain and contrast I had the impression "something" showed up, but that can be perception.
P.

I never see anything like you experienced with my two ZWO cameras, but the moiré pattern in there.

That is the reason I use my PGR Grasshopper 3 USB3 CCD cameras for solar imaging most of the times.

I forgot to mention something obvious... try different USB cables

can you check sensor temp from the FireCapture info files. Going thru last weeks data noticed that the problem seems to occur (at least on that days imaging session) when sensor temp reaches 44.9*C. This is close to the operating specs for max temp at 45°C. This camera seems to produce more heat than the 120.

I also noticed that you are not using the lowest gain value.

I never touch gain, only gamma and exposure

@pedro
I did several tests with gain setting. They have heavy impact on noise with this camera, but could not see difference in the artifacts.
rgrds,

I see a similar pattern with the ASI1600 and 290 when the live view is scaled back to allow the full frame to show on the preview window of Firecapture. I was thinking this was a major problem, but once I zoom in to 100% or so it disappears and does not show in the processed image.

Does the pattern carry through into the final capture/processed images?

Other than that I don't have much to add.

What model you have, mono or color?

Good point Brian. That can be it. Nevertheless ASI ZWO have lots of artifacts

reproducable in processed image viewed at 100%. Sony has had several issues with same type of artifacts but with color sensors. see http://www.xdcam-user.com/2015/04/more- ... artefacts/
Looks a lot like this, but this is a monochrome sensor ....

Never seen that on a Basler IMX174.
Did you try dark/flat ? A flat should solve it.