I LOVE finding out about different ways to appreciate the Sun and light in general. Use this forum to post your info or questions about various outside the mainstream ways to appreciate our life giving star!
Post Reply
12 posts • Page 1 of 1

Following up on our "foam board spectroheliograph" viewtopic.php?f=8&t=32189 and the upload of a new version of SHG software viewtopic.php?f=33&t=32654, this post shows how we have improved the acquisition and processing of SHG images.

With regards to the hardware of the SHG, we found that the literal "weak link" was the connection of the collimator to the telescope. There were actually two issues. First, we initially used a Lunt Herschel wedge with 1.25" fittings (the wedge is to reduce the solar flux entering the SHG, primarily in order to not damage the slit). But the Lunt has screw-in fittings that can easily unscrew. We therefore upgraded to the Baader Herschel wedge which has 2" fittings which do not unscrew.

Second, the old collimator (a 100mm f4 M42 telephoto lens) was not really strong enough to support the forces on it. We therefore replaced it with an Asahi Pentax 100mm f4 M42 bellows lens, which has no built in helical focuser. This lens is much sturdier and likely also higher optical quality. We added a few M42 extension rings and a short Asahi Pentax M42 helical focuser in order to bring the slit into focus (we happened to have a lot of Pentax stuff around from earlier projects).

The updated hardware is shown in the photo below. The top corner of the foam board box is open to show the diffraction grating; normally, this corner would also be covered. [The lid is built in two sections, both attached with Velcro to allow access.] We actually performed quite a bit of surgery on our foam board housing and did so literally with a scalpel. We then reassembled the apparatus with hot glue (no stiches required). The Baader wedge is a great instrument and built like a tank. The only problem is it takes up a lot of back focus so will not work with an SHG on every telescope. The APM 80mm f6 refractor used here has a huge amount of back focus but was only just able to focus on the slit.

In general, the current consensus seems to be that scanning at the fastest rate possible is preferred. With the 80mm f6 refractor, I was able to scan at 16x sidereal rate with an average FPS of 380. This corresponded to an exposure time of 2ms, gain of 270, and ROI of 2000x140 using the ASI 178MM. The SER file was saved using FireCapture 2.7beta with 1x1 binning, 14bit bit depth, and USB traffic = 100.

During the acquisition session, we were able to use our updated SHG software to get a preview of data. We set the Y/X geometry correction to 1, the slant angle (which is actually a tilt) to zero, and "save CLAHE image only" option. The result is an image with uncorrected geometry, as shown below. 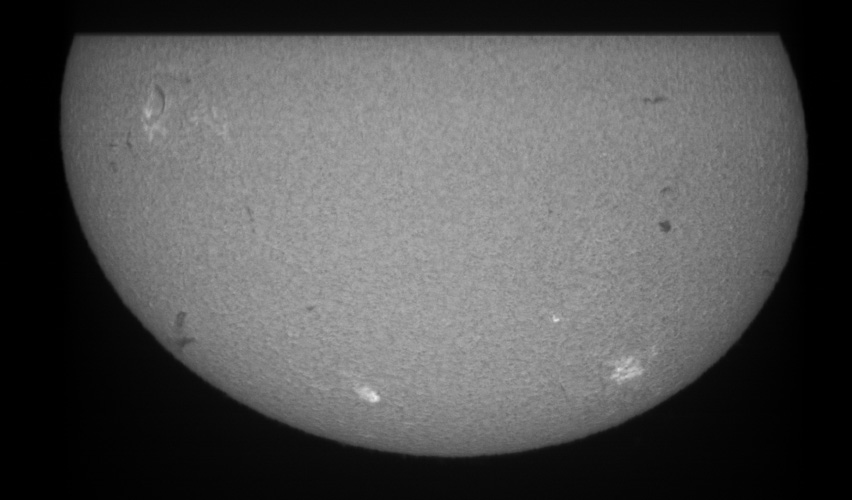 The scanning direction is left to right so the image shows there is a slight over scanning (which is preferred). There is a bit of tilt but not enough that would cause too much problem later. The tilt could be removed by adjusting the angle at the Herschel wedge.

When all the data is collected, we run all the SER files in batch mode with Y/X ratio and Slant angle set to auto. This typically takes less than 30 seconds per file but the process will halt if one of the files has an issue. In general, I find the CLAHE (Contrast Limited Adaptive Histogram Equalization) PNG file is the most useful one for further processing. The following are two good images which together cover the whole disk (the slit used was 3mm long and the image of the Sun on the slit is approximately 4.4mm). Since the scanning was done in DEC, these actually correspond to east and west images. The _log file which the software generates indicates that the Y/X ratio was 0.85 (a good value) and the slant angle was -3.4 degrees (larger than desired; 1 degree or less is preferred). 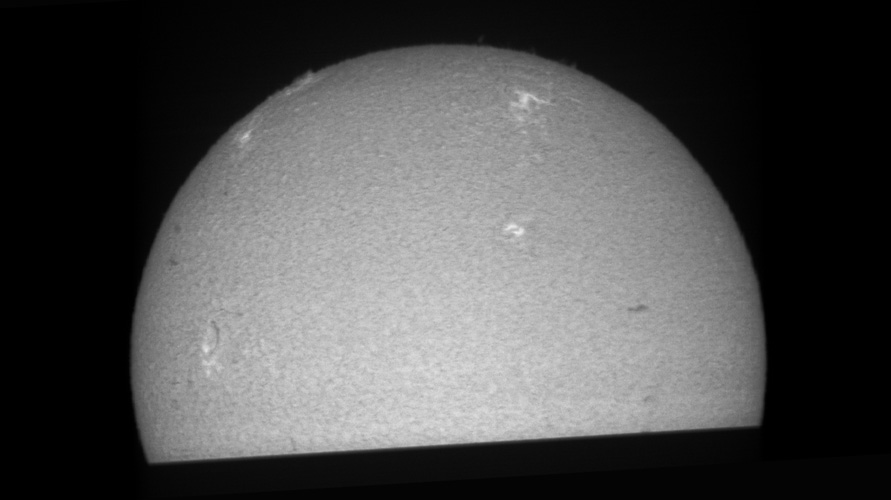 These images can be further processed and formed into a mosaic. The left side in this case was not as good as the right side and I did not spend much time on processing or merging the two images. We compare this SHG image to one from Pedro Re viewtopic.php?f=4&t=32726 taken on the same day (21 July 2021) but 5 hours earlier (08:00 UTC vs 13:00 UTC). Pedro's image was taken with a double staked etalon (SM90 and SM60). The very narrow bandwidth inherent with the spectroheliograph means the SHG image most closely resembles a double stack etalon in terms of contrast. Ideally, a longer slit is preferred to cover more of the Sun's surface without requiring a mosaic (perhaps Thorlabs will come out with a 6mm-long version later this year). Also, since an image is formed from a single scan rather than stacking many frames, having exceptionally good seeing conditions is required to truly rival a good etalon solar image (I should have done my imaging as early in the day as Pedro).
Last edited by thesmiths on Wed Jul 21, 2021 11:46 pm, edited 3 times in total.

Doug,
That's an excellent result!
No disrespect to Pedro, but why buy an expensive double stack Ha filter nowadays when you can get results like this from a small lightweight SHG which costs much, much less !! (I've been waiting years to say that

)
A couple of questions:
1. Why not just use a ND1.8 sub diameter filter rather than the expense of a Herschel wedge?
2. How do you manage to achieve such good focus? I'm envious of your results.

To Ken: I think the payoff really comes with a slit longer than 5mm so a full disk can be done in a single scan at 500mm focal length. And a 1000mm telescope can do a hemisphere. Short focal length 4 inch telescopes are pretty common -- but a double stack 100mm is typically out of reach. I think that's what you're getting at.

Christian Buil has done some recent experiments with full aperture ND filters. He found 0.9 ND Hoya filter (plus an IR cut filter) worked the best. Interestingly, the B+W version (German made, much more expensive than the Hoya Japanese made) caused some fringing problems (maybe the glass surfaces are too parallel?). I did suggest to him a sub-aperture design might be interesting -- but I think he found the idea to be very foreign. It is a fairly mainstream idea in the world of PST modders, though.

Your question on focusing: of course, there are three focuses. The easiest one is focusing the camera. Since I am concentrating at the moment on H-alpha, I used a #29 red filter + IR cut filter to find the setting where the camera lens focuses at infinity near H-alpha. I made a small scratch on the lens to mark that focus point. I could add others for shorter wavelengths. [In the old days, camera lenses had a special marking for IR focus, which is how I thought of doing this.] 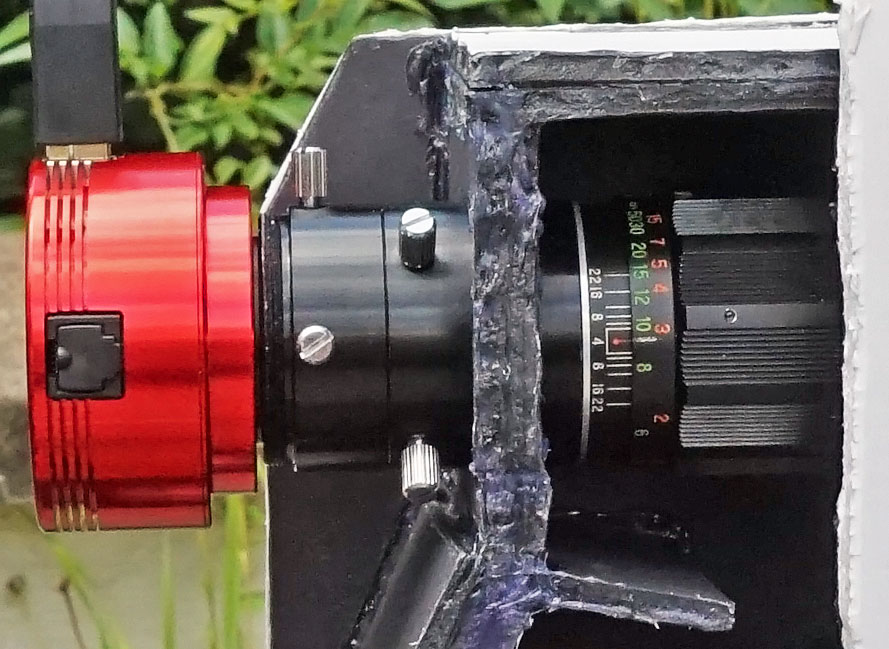 I think, Ken, your question actually was addressed to the third focus -- focusing the telescope. This is the trickiest. I developed a good trick and I see Christian and the SolEx crowd invented it independently. I call it "scanning focus". The idea is that at optimal focus, the image will have the maximum signal. What is maximum signal? It is when there is the maximum fluctuations in the spectral line (since variations in the spectral line are the signal in the image).

But you cannot see the signal while the telescope is static. So you need to actively scan the telescope at a slow/moderate speed while adjusting the telescope's fine focus. The point where the little wiggles in the spectral line are the greatest is when the focus is optimum. On my SynScan controller, "rate 1" is 1x and "rate 2" is 8x (sidereal). I use 8x but the best rate to use is probably more like 2x or 4x sidereal. You should watch for the wiggles at 100% zoom, by the way.

The "scanning focus" trick is so simple (and maybe obvious?) but it works like a charm.

I should mention that "scanning focus" should be done after what I call "edge focus" -- getting a sharp focus on an edge of the Sun. This requires moving the telescope position so an edge is visible. "Edge focus" is a kind of "coarse focus" while "scanning focus" is a kind of "fine focus". Ideally, you should try to do the "scanning focus" at 100% zoom near an edge, because it's easy to totally lose focus otherwise. If you can also see an edge, you can use that for reacquiring coarse focus and then determine the fine focus by watching for the wiggles to magically appear. It seriously is like magic.

Doug,
Thanks for feedback/ comments.
Fulvio Mete I believe was the first to adopt what you call "scanning focus". Long before Christian and the French team

To Ken: I was not able to find in the links a description by Fulvio of that focus method (do you know which page in the pdf?) but it would not surprise me if he did. As they say, "there is nothing new under the Sun". I think the advent of higher speed scanning (which has been permitted by faster cameras, faster USB interfaces, faster memory and faster CPUs) has greatly improved the acquisition of data in general (not just focusing).

What a fabulous full disc image, even with the join that is one of the best SHG images I have ever seen, well done!!!

Glad to see the progress, Douglas.

As you say, truly exceptional seeing conditions are required for a spectroheliogram to rival a filtergram in image quality. In my opinion, hydrogen alpha is not the ideal wavelength to use to illustrate the strengths of the SHG, unless you’re interested more in the spectral characteristics of features rather than the details of their morphology. On the other hand, if you tune to calcium H or K, any spectral bandpass less than ~ 0.5 angstroms already reveals features (eg. filaments) missing from conventional Lunt or Daystar filtergrams.

Doug,
In Fulvio's eBook pdf around p141
""
....then it will be necessary to operate on the
spectroscope focuser (in the case of the Littrow on the focuser of the ED
refractor) until the lines are clear and defined and, even more,so are the
chromospheric details inside the lines....
""

I found when looking for UV filters for the DIY CaK filter set-up, that not all filters are good for spectroscopy in the UV.
The cut off wavelength on the majority of filters was very close to 400nm - no good for CaK imaging.

Could an eyepiece be put where the camera is? Would focusing be difficult visually? It does look like an awkward place to put an eyepiece, if possible.

James,
As I said on another thread, this Sol’Ex and other digital SHG are designed as imaging instruments and not suitable for visual.