Big filaments in H-alpha with SHG at 700mm FL

I LOVE finding out about different ways to appreciate the Sun and light in general. Use this forum to post your info or questions about various outside the mainstream ways to appreciate our life giving star!
Post Reply
9 posts • Page 1 of 1

Big filaments in H-alpha with SHG at 700mm FL

I actually wanted to try some high-resolution Ca-K imaging at 700mm focal length, but I started with H-alpha and the Sun went into the trees before I could switch from 650 to 400nm. The seeing was not as good as in the summer viewtopic.php?f=8&t=33123 using the same setup. There are some definite limitations this time of year in the UK (especially when it's necessary to shoot through the bedroom window). It was impossible to get a full disk scan with good resolution since a single scan takes longer than the air stays stable. Images were captured on 23 Nov 2021 between 12:52 and 13:06.


Here are some close ups, each taken from different captures since different parts of the solar disk were stable at different times. The first one I think is a very impressive structure. 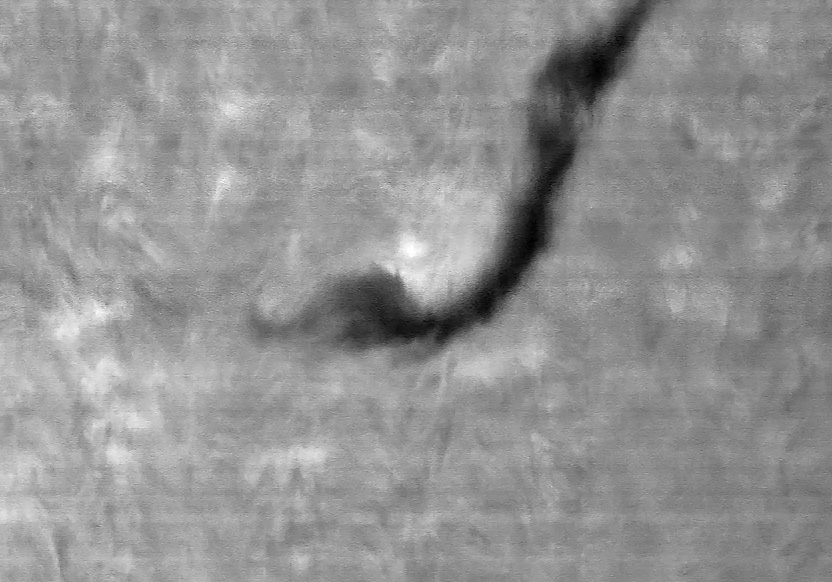 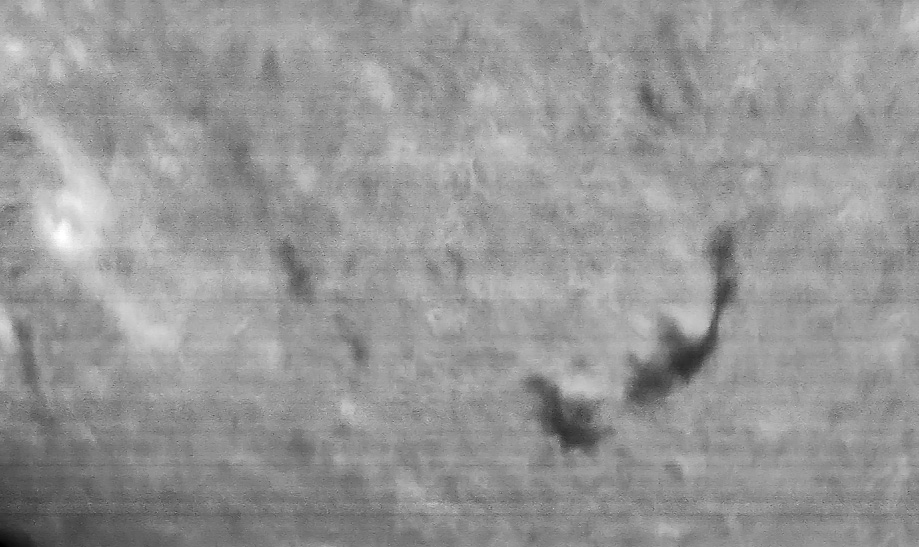 These are excellent Douglas! My seeing is generally poor this time of year if and when I get clear skies...

Wow!!! incredible images and at such hi res too

Hi Alexandra! Yes, in the UK the Sun never get very far above the horizon this time of year, necessitating getting a little more elevation to see over the trees and houses. I'm currently on the 1st floor (one above the ground floor) where I have some windows that can open up quite wide. I do have a 2nd floor but the windows are less cooperative. I've notice it's important to have a very stable floor or there can be vibrational noise. Also, best to have the inside and outside at reasonable thermal equilibrium to avoid air turbulence. And make sure the radiators (which tend to be next to windows) are turned off!

My 106mm triplet refractor used here seems to be the telescope that gives the best results for solar work. It gets very good focus in red, green and violet. It was custom made for me many years ago by an amateur telescope maker in the UK named Steve Thompson for £900 and seems to perform about as well as a Takahashi. I don't know what ever happened to Steve but he did make some quite good refractors.

Here is a photo of the SHG attached to the 106mm APO triplet mentioned above. The triplet lens cell is quite heavy so the whole system does balance. The dual-speed Starlight Instruments focuser is strong enough to provide accurate focus, despite the weight and torque of the SHG. The slit onto which the solar image is projected is located around the point of the silver-coloured extension tube. The top cover of the SHG is off to show the layout of the components inside (the cover is held on by Velcro).


The whole system was able to be mounted onto a Vixen GP2 mount (although just barely; an HEQ5 Pro is more suitable). The SHG case is made entirely of foamboard to reduce weight. A Hoya 77mm diameter NDX4 neutral density filter is mounted inside the telescope tube at the first baffle in order to provide a 75% wide-spectrum reduction in the energy input.

Doug,
Neat layout!
What does the SHG including camera weigh?
Do you stop the 106 aperture down?
You could add an Astronomik UV-IR filter, allows CaK but blocks below 385nm and above 700nm.

To Ken: the weight of the SHG with the camera and the M42 extension tubes, M42 to T-mount adapter and the 2-inch nose piece that fits into the focuser is a total of 1.26 kg. A lot of the weight is in the segment from the 2-inch adapter to the collimating lens. This is essentially a solid aluminium tube 5cm wide and 20cm long (with some small lenses at one end and the Thorlabs slit in the middle).

I actually did away with the helical focuser on the collimator since I decided that side needed to be very rigid. So the focusing of the collimator is done by manually sliding a 1-inch Thorlabs lens tube (which holds the slit). This lens tube is supported at each end by foam board cut-outs that fit snuggly inside a pair of very short M42 extension tubes. This means the focusing of the collimating lens can't be done with the SHG attached to the telescope (which it could in an earlier version). I previously had 100mm M42 lens with a built-in helical focuser (like on the camera side) but this was not really strong enough to support the weight of the SHG. So now I am using a Pentax 100mm f4 macro bellows lens as a collimator. I can easily readjust the focus on the collimator (e.g. from red to violet), but it now requires taking the SHG off the telescope.

The photo below shows a closeup of the current setup. The grating is a 30mmx30mm 2400 l/mm holographic from EO. It is mounted on an a portion of an ADM Vixen dovetail clamp (with double-sided tape) and then attached (with double-sided tape) to a 60mm diameter black Perspex disk, into which I tapped a 1/4-20 thread. A 1-inch long 1/4-20 bolt goes through the bottom of the SHG and allows the grating to rotate. (I found putting some grease between the Perspex and the foamboard provided a smooth gliding motion.) There is also a shorter M4 screw on the bottom that can push on the bottom of the Perspex disk to tilt it slightly (to correct for minor tilt errors in the construction). Doug,
Thanks for the info.