Frankenscope? Let's see it!***be advised that NOTHING in this forum has been safety tested and you are reading and using these posts at your own peril. blah, blah, blah... dont mess around with your eyesight when it comes to solar astronomy. Use appropriate filtration at all times...
Post Reply
17 posts • Page 1 of 1

I present my latest Hα mod, consisting of a GSO Ritchey-Chretien 8" + Aries 214 mm ERF + Lunt 50 etalon assembly. I completed it back in June, but unfortunately haven't had conditions and time for an imaging session yet (beside basic testing). I'm planning on putting it to good use next year.

The mod is similar to the previous one. The OTA is f/8, so close to Lunt 50's native f/7, and has a generous backfocus, so no telescope modification was needed. I measured the correct etalon distance the same way as in the 90 mm mod, and had an adapter ring made: 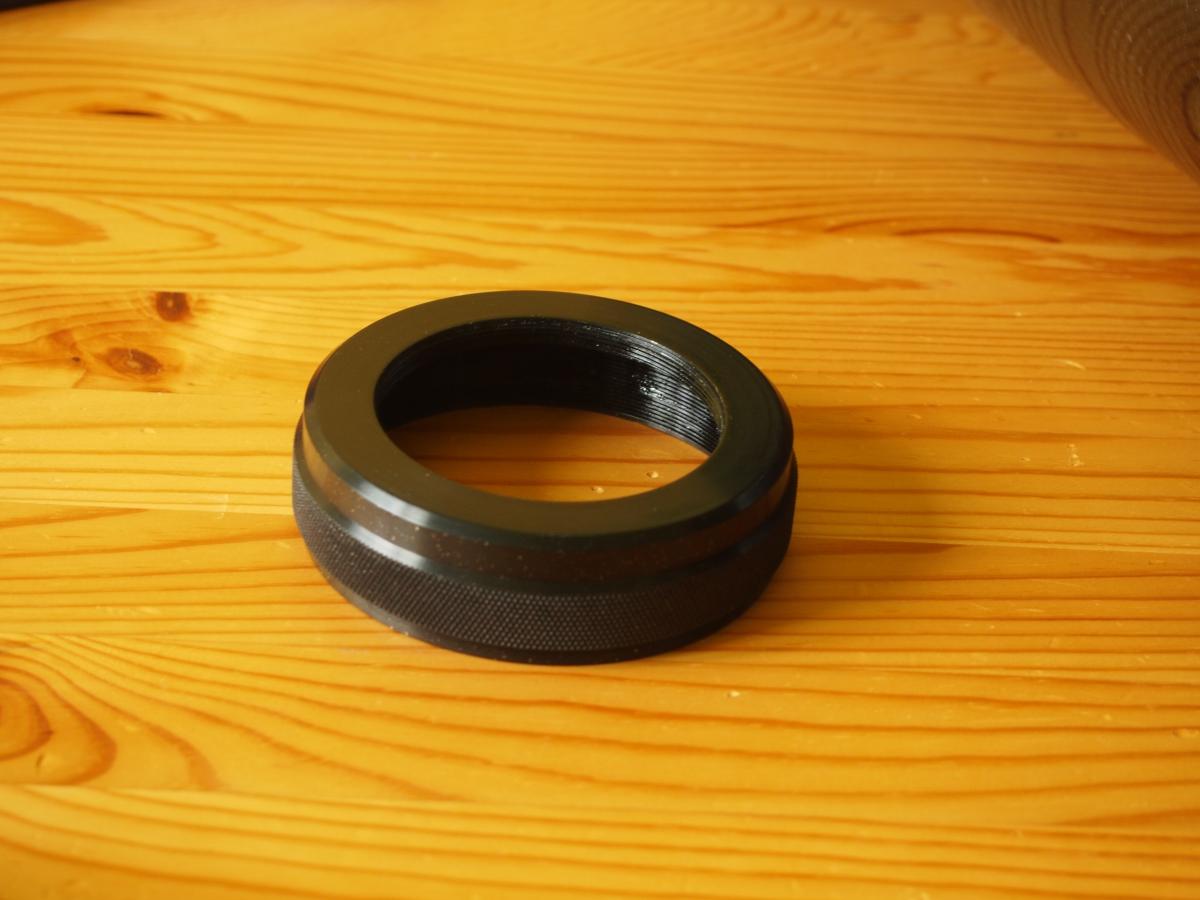 The adapter attaches to a (GSO) 50 mm extension ring.

The ERF cell's collar fits the OTA opening of a C8 and is a bit too wide for RC8. But here I have twin hollow dovetails with convenient threaded holes, so I just cut two aluminium strips (2 mm thick) and drilled and tapped holes in the cell for them: Of course the mounting screws are short enough not to touch the glass.
The strips are long enough to allow tilting (I must check in good seeing how much of it is needed): 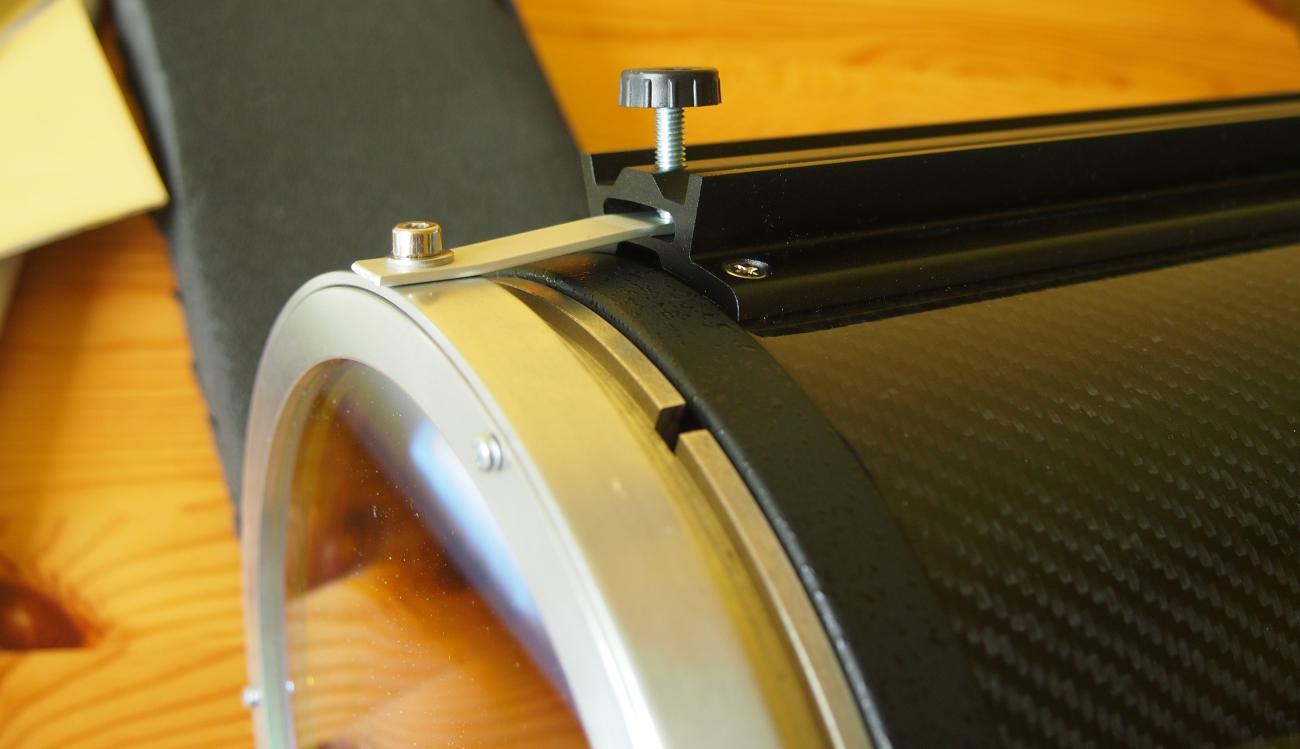 At the back is my usual optical train: some T2 extenders and a Borg T2 non-rotating helical focuser: 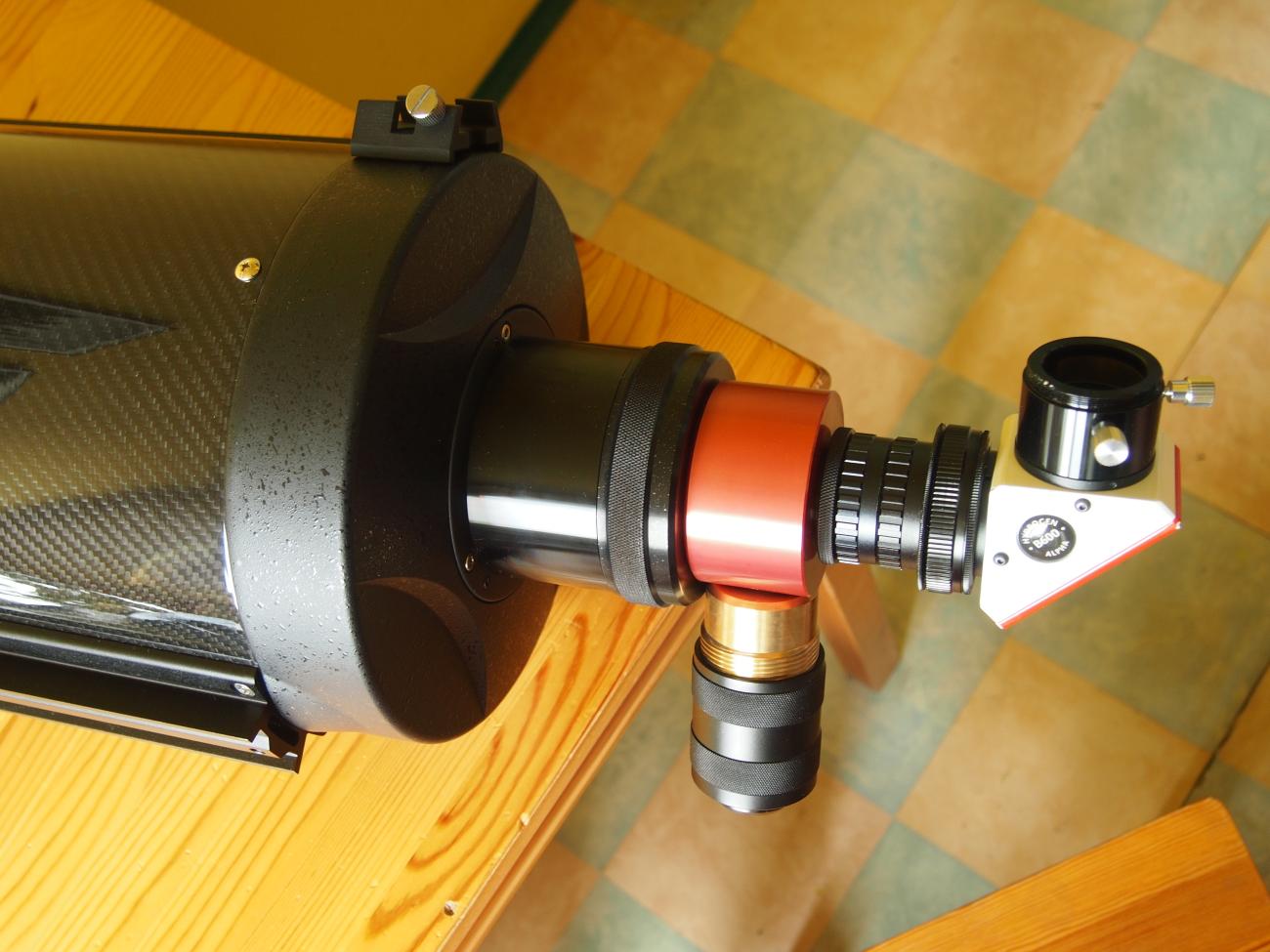 I did some basic tests, verifying focus, uniformity and sweet-spot size: everything as expected. Disk contrast is somewhat lower than with the 90 mm refractor (and SS Lunt 50 is not very contrasty to begin with), but post-processing can handle it. With my 1.6x Barlow and ICX445 sensor I needed around 1.35 ms exposure (no gain) to fill the histogram in the middle of the disk (~0.7 ms on the refractor).

I also tested white light; the ERF has some residual visual spectrum transmission outside Hα, and to get close to a ND 3.8 solar film config I used a Baader 1.25" ND 1.8 (1.5%) + Solar Continuum filters, giving me a few ms exposure at the disk center.

Seeing conditions were poor, but I had a few glimpses of the fine structures around an active region, and also in a small prominence - looks very promising. (Too little for stacking, though.)

Very interesting, can't wait to see how it turns out and how it performs! Gives a lot of promise to some future mods.

Do you think its possible to do something with a focal-reducer to get to F6.3 on a standard C8? Pretty close to the native focal-ratio right?

I would fear the back focus would be insufficient (Lunt 50 needs some ~180 mm). With an SCT it would be easier to simply attach a PST (which works at f/10).

I was just thinking of quality difference between a 50mm Lunt etalon and a PST etalon for this purpose. If the SCT would need lots of back focus with a focal-reducer with a 50mm Lunt Etalon, couldn't extensions provide that back focus without much issue?

You need back focus with both. No such thing as a free lunch in solar Marty. Back focus goes in not out.

I guess I'm confused with the language... back focus referring to travel distance into the OTA?

Back focus = distance from the rear of the OTA to the OTA's focal plane. Etalons, telecentrics etc. need to be inside this distance. RC has quite a lot, SCT somewhat less, and adding a focal reducer moves the focal plane in, so reduces back focus.

After a short (ahem) break I'm continuing with the mod.

I had nice sunny weather this weekend and did some further tests. I was afraid I may experience thermal issues like Marty with his Newtonian — since I also don't have a corrector plate nor a front meniscus (if that's what makes the difference); and the only other person I know of with an RC and Aries ERF is Stu (Carbon60) — but his is a truss OTA.

Therefore I decided to preemptively provide some active cooling. I didn't want to perforate the nice carbon tube at this point, but I found this interesting thread on CN about a DIY Cat' cooler: 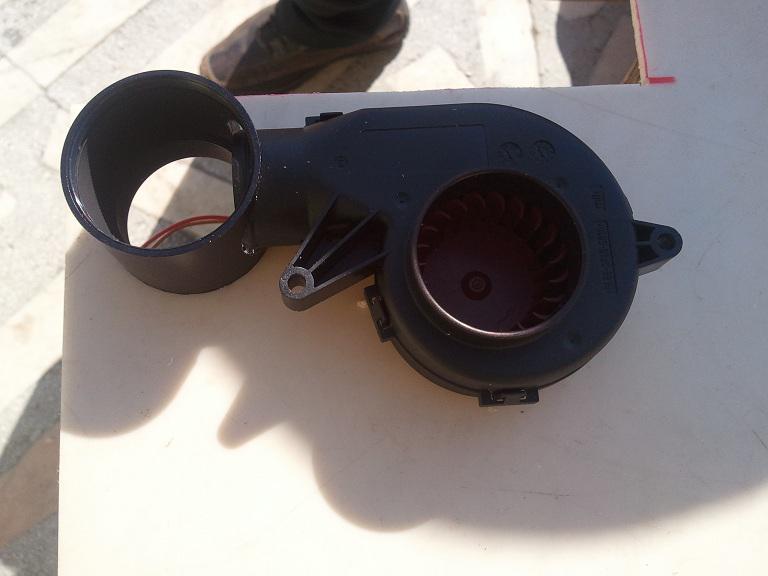 and followed its example. Using this configuration, the ambient air would first flow over the front of etalon assembly (namely, the Lunt's small ERF over the collimating lens), then exit through the primary mirror baffle and cool the secondary mirror.

Time to drill a hole in the 50 mm visual back extension ring: ...GSO sure don't joke around — the ring is 7 mm solid aluminum: The hole (before filing and smoothing): 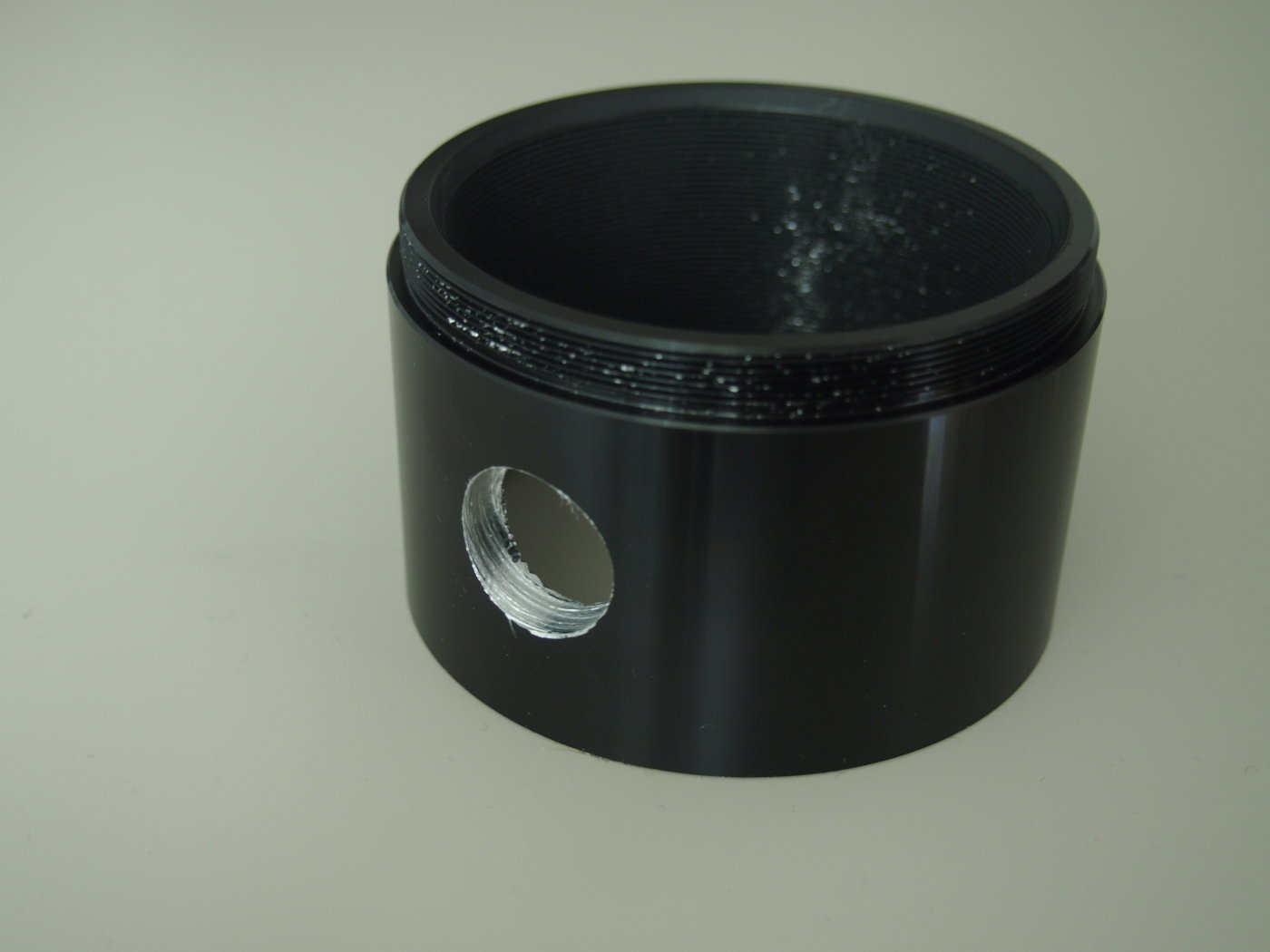 Remembering my experiences with PC modding from some years back, I first experimented with a typical 80 mm PC case fan. Unfortunately, it turned out that with any sort of physical restriction, e.g.: the airflow drops dramatically. No wonder, really, the fan blows at meagre 1.86 watts. So I got a (not much bigger) radial fan pulling up to 36 W — this one works much better (I got a DC-DC step-down converter, too, and ran the fan at only 7 V satisfyingly).

Temporary mounting with adhesive hook-and-loop strips (doesn't look like it, but it's very secure; the fan is only about 100 g anyway; the tape is mostly for sealing the hole): Field test on the telescope: And a piece of white paper on the secondary holder (since it's quite big and painted dark): 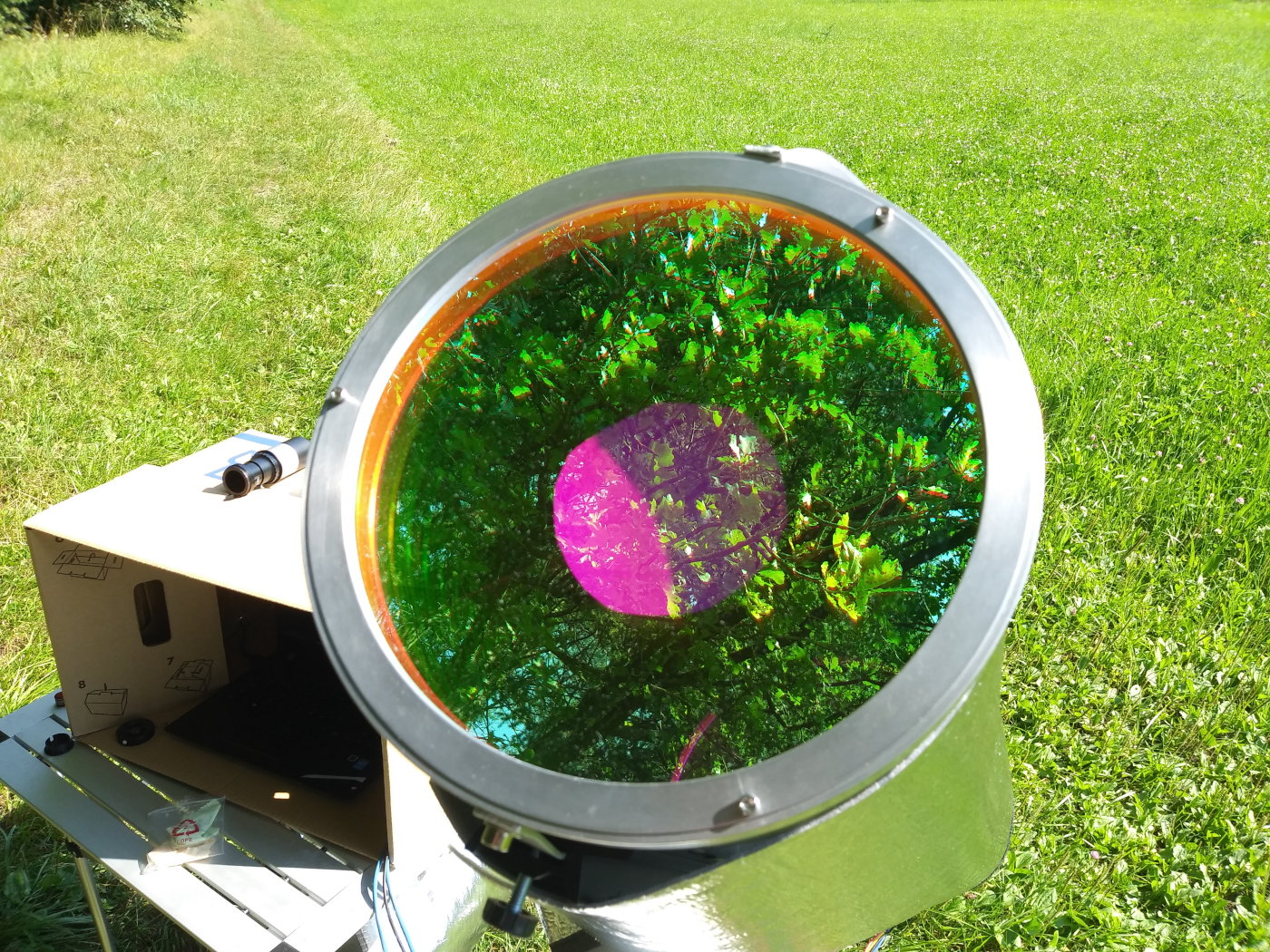 To provide a reliable baseline, I also made a Baader film (ND 3.8) filter — which is known not to cause any thermal problems — and checked the views through it first. Unfortunately, the seeing was probably good for my 90 mm setup, but not for 200 mm. The granulation was barely visible. It was similar with the ERF and the Lunt etalon. There were glimpses of the high-resolution Hα structures, but not enough for stacking.

I did turn on the fan a few times for a few minutes, but in these conditions I couldn't tell if it changed anything. The test was inconclusive and will have to be repeated in better seeing.

Forgot about this thread! I since tried my Lunt50 as a mod with the 8" HaT and 0.7x reducer - worked ok, just a small sweetspot that needs to be zoomed in with a barlow etc.

Thanks for the updates.

I managed to stack something! Due to mediocre seeing it's still rather a teaser than a proper first light, but I got fine structures never seen with my setups before: Small update about the session described above: as I found out later, the telescope was severely miscollimated. I guess that's why the fine filaments were only visible along one direction. In September I learned how to collimate (I use a Cheshire and an artificial star) — as you can see in this Mars time lapse — and hopefully I'll get better results this year.

I captured quite a lot of material on April 23; it looked quite promising in live view, alas, the seeing just wasn't good enough. Stacking went fine (this time the RC was carefully collimated), but when it came to sharpening, the lowest sensible σ of L–R deconvolution was around 2.36, i.e. around 2x larger than the typical 1.19 for the 90 mm setup (at the same focal ratio). Which means I got only about as much image detail as from the (2x smaller) refractor: The hunt for good seeing will continue.

Here in lies the problem when the seeing is bad and doesn't support the aperture!

The hunt for good seeing is eternal!

I had good seeing today (as in: immediately in live view I could tell "this is it"; fine structures were easily visible). It tooks some time, but I can confirm the mod works: No thermal issues after all, I didn't need to run the cooling fan (though I did leave the Lunt's mini-ERF on the etalon assembly; I remove it for the 90 mm configuration).

More imagery will be posted in the main forum section.

Here is the Filip's sun image I was able to restore.

Some better focusing, more frames in the movie and some more clever hunting for seeing moments, less noisy camera and the results can be way better. 
"Solar H alpha activity is the most dynamic and compelling thing you can see in a telescope, so spend accordingly." (c) Bob Yoesle.

Thank you, Valery. I've also posted the stack in this thread for people to try.