So I was very unhappy using the 5x Powermate with the Combo Chromo Quark, so I bit the bullet from Bob's advise on CN Forum and ordered the Baader 4x Telecentric, which was designed for solar. First I'm glad I ordered many useless adapters over the years, because I put them all to use today. It's not the ideal yet, as there's a bit of flexure as you might imagine from the picture. But once I hooked it up and focused....YES. It gives me the sharpes focus with tiny details that I've yet achieved shooting the sun. Either I got luck with a few moments of amazing seeing, or this Baader devise does a super job. I have a few images to process. It's hazy out, but they should be a good test. Now I'm burning through the haze for a prom animation. Hopefully I'll get those images processed and posted later today. 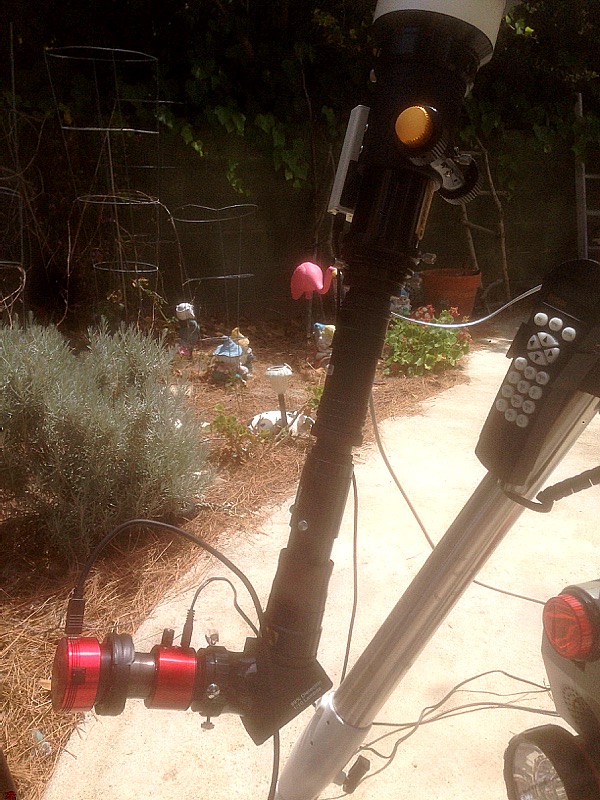 Excellent! I have the Baader telecentric too, and it is an excellent performer with my rear mounted etalons.

Absolutely crazy setup! I'd never use such a long and flexible train unless I have Coude focus or horizontal solar telescope.

IMHO, a 2" 2x TV Powermate does it's job nicely with my Quark (it's native terecentric system removed). Significantly better than Quark with a native TC system. Image is razor sharp across full FOV. The feeding telescope is F/10.

Nick, for your further large aperture setup I would advice you to follow my way. It works just fine.

Thanks for the feedback Mark and Valery. Yes, it is crazy long. The Baader 4x requires 220mm behind it, and a bit in front too. This is not my choice for the 9.25" Valery, but...I'm gonna have to try. Baader makes a 2x version as well, which I will most likely go for. I've not had much luck with Powermates, although never tried a 2" version.

Here's the first test shot. Proms are nice and sharp, but surface not the best. It was hazy, so I think there will be some improvement. I also just eyeballed the Baader spacing, so I need to adapt it correctly still. 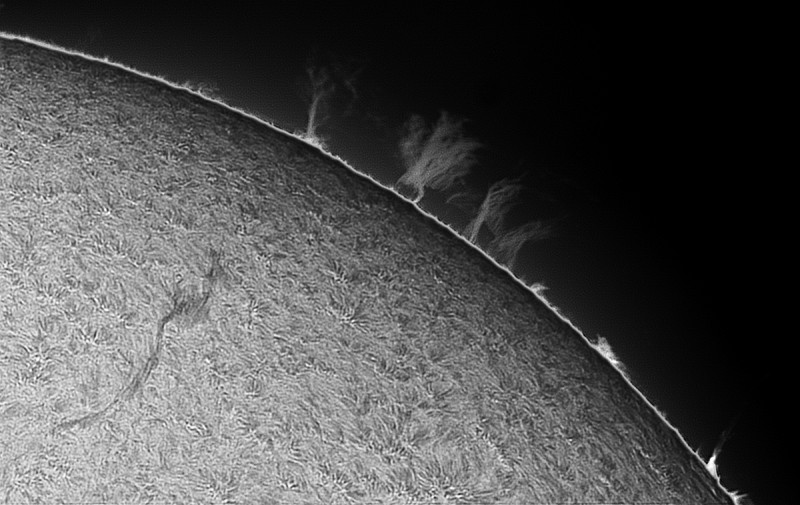 And a second shot... 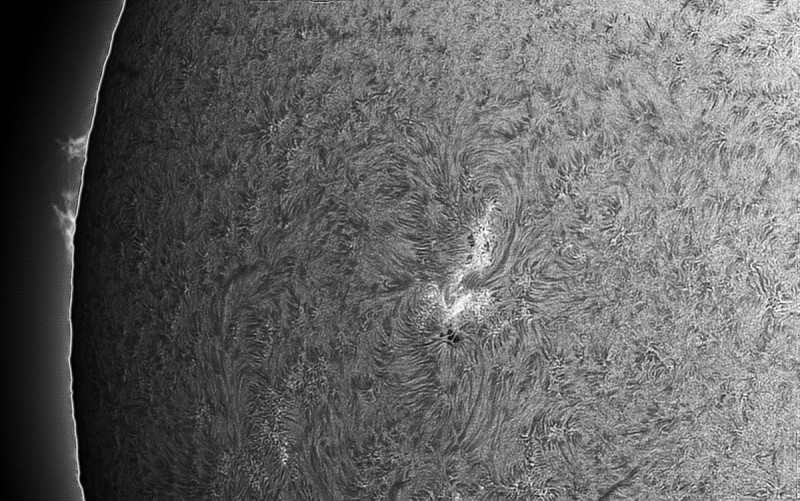 Crazy indeed but if you are happy with the results then thats whats important.The Quark is a labour of love for which in various set ups I often quote ryhming slang.

My first thought was wow that is long!

I also have the Baader TZ-4, and it is rather a long affair, but it does work well with my Solar Spectrum filter. Nice results on the proms.

Thanks everyone. I did some measuring today, and I can shave 2.5 inches off setup, which will help. And I found a single threaded adapter that will replace a current 4 adapter connection, so flexure should be improved.

I reprocessed this image as I didn't like the solar surface on the original post above. Think it's less pushed. 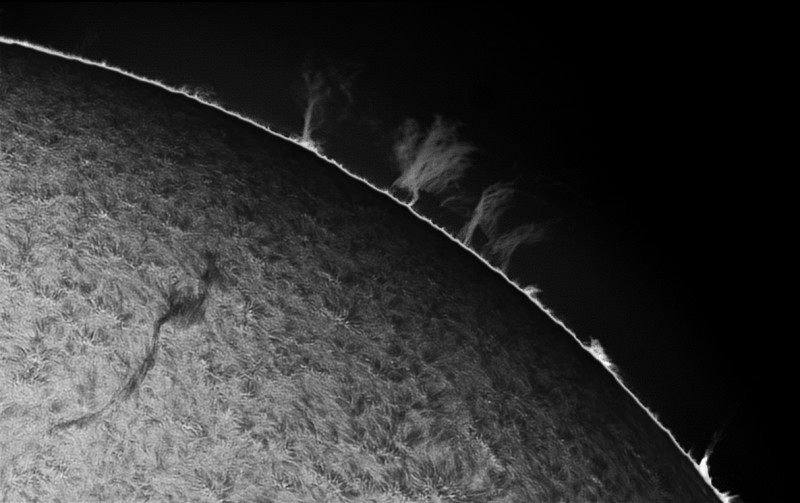 Impressive ans nice!!! Maybe if you have room and 2 diagonals, you can fold back the lightpath, making a U with it and get the Quark at the focuser level

Thanks zorgdotnl. Nice idea! That two diagonal setup would be pretty funny.

Here's one more shot from that first day out with the Baader. Clouds and rain here for the next few days.... 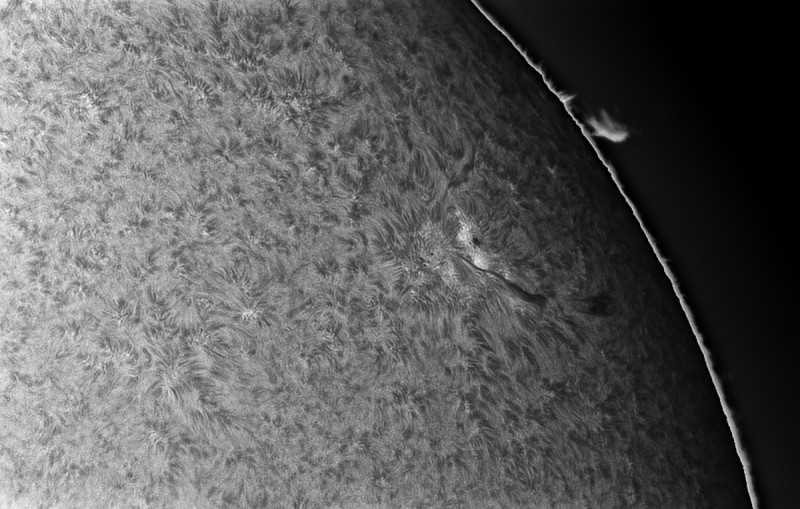 New to this forum and new to solar imaging. I have a Lunt LS80THa and am thinking of adding a Baader Telecentric (2x) element. I am quite scared of the looooong imaging train that you had to create here. How did you work out the different spacings?

New to this forum and new to solar imaging. I have a Lunt LS80THa and am thinking of adding a Baader Telecentric (2x) element. I am quite scared of the looooong imaging train that you had to create here. How did you work out the different spacings?

Hi there and welcome to the forum.

I'm confused why you want to add a baader 2x telecentric to this setup?

Nice image, You are in the red wing, so lower your set point a bit to move it back. When you see the tops of the surface with the higher contrast you know you went past Ha center.
When setting up the TZ4 Baader telecentric , first the front lens will be 46mm in front of prime focus. What I like to do is make a focusing tube. I make a PVC tube the length of the back focus(220mm)with a paper to focus on. I put the telecentric on the scope with out the filter. Place the tube on the back of the telecentric ,then focus on the paper as a screen. Once you know this distance. You add you diagonal and filter and see how close you are to this focus distance. As long as you are somewhere close to this distance the telecentric will work well.
Mark W.

I look at your set up image and, most refactors the prime focus is 4 to 5" behind the focuser, when the focuser is racked in.
I usually back it out about 3/8". From there it usually takes about 50-60mm spacer tube. Then the telecentric. The TZ4 is design for a 2" diagonal, so that eats up most of the 220mm back focus. Then maybe another spacer tube, then the camera.
I'm not sure why yours looks so long.
Mark