Frankenscope? Let's see it!***be advised that NOTHING in this forum has been safety tested and you are reading and using these posts at your own peril. blah, blah, blah... dont mess around with your eyesight when it comes to solar astronomy. Use appropriate filtration at all times...
Post Reply
24 posts • Page 1 of 1

Lenses you've listed sound wrong to me; the rumak is f10. The pst etalon is 20mm diameter. This then needs a -200mm fl lens to collimate the beam, that would need a 20mm entrance pupil. You would need a 2" -200mm lens that you stop down to 20mm.

Its the longest fl length lens I can find. For minimising abberations.

Also I am not restricted by the original PST 5mm blocking filter at the back and the backfocus of 200mm in the PST black box.

Its effectively a Combo as the PST aperture is not restricted by the 20mm clear aperture filters.

I am just using the etalon part from the PST in a full mod.

The PST etalon has 20mm clear aperture regardless of configuration it is used in.

To minimise aberrations the focal ratio of the scope, collimating and refocusing lens need to be identical.

You've got a lot more energy with a 180mm aperture than a 110mm aperture to risk damage to scope and also eyesight.

I would wholeheartedly recommend a full aperture ERF. Would also like to point out that the advice given on this forum, or the forum itself cannot be responsible if mods go wrong and do not work as expected.

We need to have F/D = F/d, otherwise :
- if F/D > f/d, there is vigneting with the etalon. In other words, only part of the etalon is used => the field of view (more precisely the sweet spot on Ha line) is reduced.
- if F/D < f/d, there is vigneting in the lens (or mirror) of the telescope. In other words, this is just as if you were using a smaller telescope.
So, the optimal is to have F/D = f/d.

The other important point is that the collimating lens is to be placed at the distance "f" ahead of the focus of the telescope. You have to check if this is indeed feasible.

All your math valid for only one single point on the sun disk. But the sun is not a point. The sun heat will hit the collimation lens cell, the wall of the baffle, when you will observe the edge of the sun (proms, spiculaes or AR at the near limb) the sun heat will hit the secondary baffle, the main baffle, the collimation lens cell. Internal air turbulence is guaranted.
"Solar H alpha activity is the most dynamic and compelling thing you can see in a telescope, so spend accordingly." (c) Bob Yoesle.

I have gone back to my attempt to graph the Maksutov 180/1800. Complicated diagram.

I overlooked the parallel beam out of the lens was bigger than the 20mm PST aperture so vignettes as you point out.

I have been working on reducing other telescopes FL for EAA astronomy and I have sneaked macro-lenses larger than a 2" focusser by using a 48mm to larger size adapter in front of the focusser tube, you have to take the focusser off of course.
On a Optic star 80mm F4 refractor turning down 48-49mm adapters for a 49mm nominal macro-lens allowed it to sneak down the relaxed tolerences in its focusser.

So I can do the same on the Mak focusser, having the bottom of the focusser turned out for the 50mm lens holder on an adapter to 48mm.

Then I can put a 48mm UV-IR or Baader 35nm behind the collimating lens and like in the Vixen the reflected light goes back out as it came in with no dangerous hot spot.

I tried my PST in my 127mm refractor for the first time today. Using a 2x ED Barlow attached to the PST AOK T2 adapter I had made via a 48mm to T2 adapter.

I did not want to fiddle about with the 20mm collimator lens as in the Vixen 110 adapter and a fiddly fit.

It reached focus despite having no collimator lens, if not the collimator might have given me enough back focus.

Amazingly it worked without a collimator lens. First saw the sphericules on first focus, a very nice sharp prominence on the bottom left for me and the umbra and pen-umbra on the spot to its top right. On a par with the view I had through RodAstros set up.

I also removed the Baader 35nm and that seemed OK as well.

Unless i'm missing something here; you're using a 2" collimator with the 2" ERFs, the free aperture of the PST etalon is only 20mm so either you're going to get an effective 20mm field stop aperture in that 2" beam. Or, you're only using the central 20mm of the ERF and collimator lens in which case you're concentrating 180mm beam down into a 20mm beam on the centre of a filter. I think that will pop it.

Andy, when will you understand that your math does not reflects the reality?

I have experimented with 2" Baader 7nm Ha filter in the C11 telescope. Cracked. And the telescope full of smoke when the sun was off-center.


Valery
Last edited by Valery on Fri May 17, 2019 12:48 am, edited 1 time in total.
"Solar H alpha activity is the most dynamic and compelling thing you can see in a telescope, so spend accordingly." (c) Bob Yoesle.

I found this thread hazardous, especially for not very experienced users. And what Andy offers is more hazardous than were propaganded by Apollo Lasky here and there. He was banned here and there.

I'd offer Andy to experiment with his equipment at his own risk without propaganda here.


Valery.
"Solar H alpha activity is the most dynamic and compelling thing you can see in a telescope, so spend accordingly." (c) Bob Yoesle.

I own telescopes that I don't think of as disposable so when entering into Solar imaging it was important for me to make sure the setup used was safe for me and the equipment. I tested different full aperture energy rejection filters to see how they performed. Below are two images taken with a thermal camera showing the temperature of a paper screen at the axial port of a 6" Maksutov. Temperature readings of the hottest ERF was taken after 2 minutes with the sun centered. The scope was capped before the paper burned. The cooler EFR produced a stable temperature at 163°.

This scope utilizes a reflective spot on the meniscus with no secondary baffle to heat. Under no circumstances would I subject my equipment to unfiltered, concentrated solar radiation. 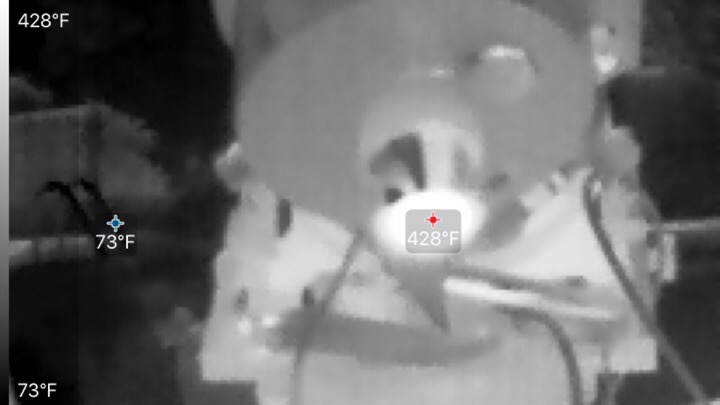 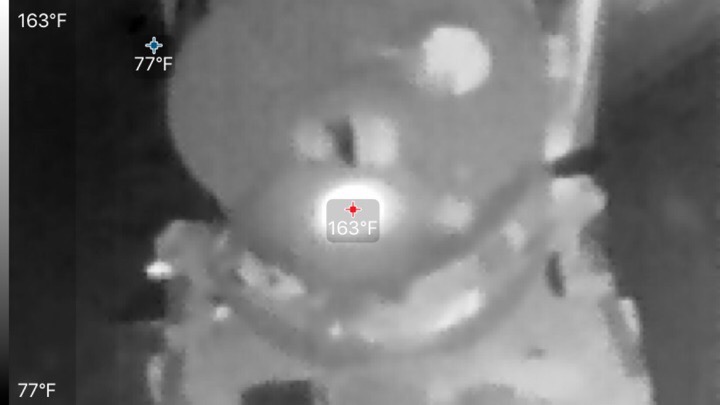 I am not using the Mak without filters.

Many years ago at the RTMC, I was shocked to see a 10" SCT without an ERF and a Daystar filter aimed at the sun, it was Jen making tests using just a 2" UV/IR filter in front of the filter, it stayed aimed to the sun for a couple of days without any harm to the scope or the filter.

what a large difference in T between the hottest and the coldest ERF...

A very interesting experiment indeed, is the hottest ERF you tested still safe at the etalon or would it require additional filtering ?
Raf
My solar images and reports with articles on solar equipment
Top

Yes, the difference in temperature was surprising. I did not test my Maksutov scope without any full aperture filter for obvious reasons. The Quark Combo used showed no signs of damage using the hotter ERF. The Combo incorporates a reflective blocking filter as it's first element. However, images taken with the cooler ERF are superior.

Another point to consider is the back reflections. A point of concentration located near the ERF filter melted regions of a 3D printed cell when the Sun was positioned off axis using the hotter ERF.

Is the hotter ERF safe for this etalon? Without long term or accelerated aging tests performed it would be hard for me to say. If I were selling etalons I might say sure, what do have to loose? I am only relating my experience using a Maksutov telescope. Other telescope designs will be different. You will find that full aperture filters or smaller off axis ERFs are recommended for Maks and SCTs.

Remember heat and temperature are not the same thing.

This topic has received a lot of attention with several experienced members of the forum contacting me to express concern about the whole concept of using the 180/1800 in this way.

I'm not directly familiar with this particular scope so I had a google of it. I'm guessing it's a scope like this one Andy? https://www.avaruus.fi/foorumi/index.php?topic=7476.0

My main concern with the concept you propose is the thermal management of the design. Putting the ERF where you suggest will still have the full force of energy on the secondary. This will heat up, and will expand, it may well crack the corrector plate and also the secondary. Like Valery says the baffle is also at risk too. 428F is pretty hot!

As with the feeling of others I would not recommend this modification in this way at all. A full aperture ERF is the best solution at these apertures.

marktownley wrote: ↑
Sat May 18, 2019 2:04 pm
As with the feeling of others I would not recommend this modification in this way at all. A full aperture ERF is the best solution at these apertures.

I totally agree, Mark, however Astrophil's experiment raises an interesting point as it seems that front ERFs can be quite different each other. How one can be sure that a given ERF is doing its job in terms of safety for the observer and the equipment ?
Raf
My solar images and reports with articles on solar equipment
Top

There are yellow glass, red glass, Baader D-ERF, and Aries D-ERF that I'm aware of. Dielectric coated filters are the coolest. Listen to Valery on this subject.

Absolutely. He has more experience than probably anyone else on the planet when it comes to large aperture solar systems using mirrors.

I am aware too there are all these ERFs, which ones were the subject of your test ?
Raf
My solar images and reports with articles on solar equipment
Top

I've got a couple of Beloptik tri-bands, and Frederic at Airy Labs make a Ha ERF for C9.25.

http://brierleyhillsolar.blogspot.co.uk/
Solar images, a collection of all the most up to date live solar data on the web, imaging & processing tutorials - please take a look!
Top
Post Reply
24 posts • Page 1 of 1