An archive of all the best images Solar Chat has to offer!
Post Reply
14 posts • Page 1 of 1

The weather forecast was spot on yesterday...a sunny morning, cloudy afternoon, and evening showers. Recent rains have made the fields too wet to do much farming so I was able to work from home and got a bit of a solar fix too. Seeing degraded rapidly as morning waned, but I'm happy with the results.

The first image is a composite full disk using separate disk and limb exposures, taken through the LS80T/LS75FHa/B1800Ha and ASI174MM camera. The first image has the limb inverted, whole the colourized image has both parts displayed as positive views: 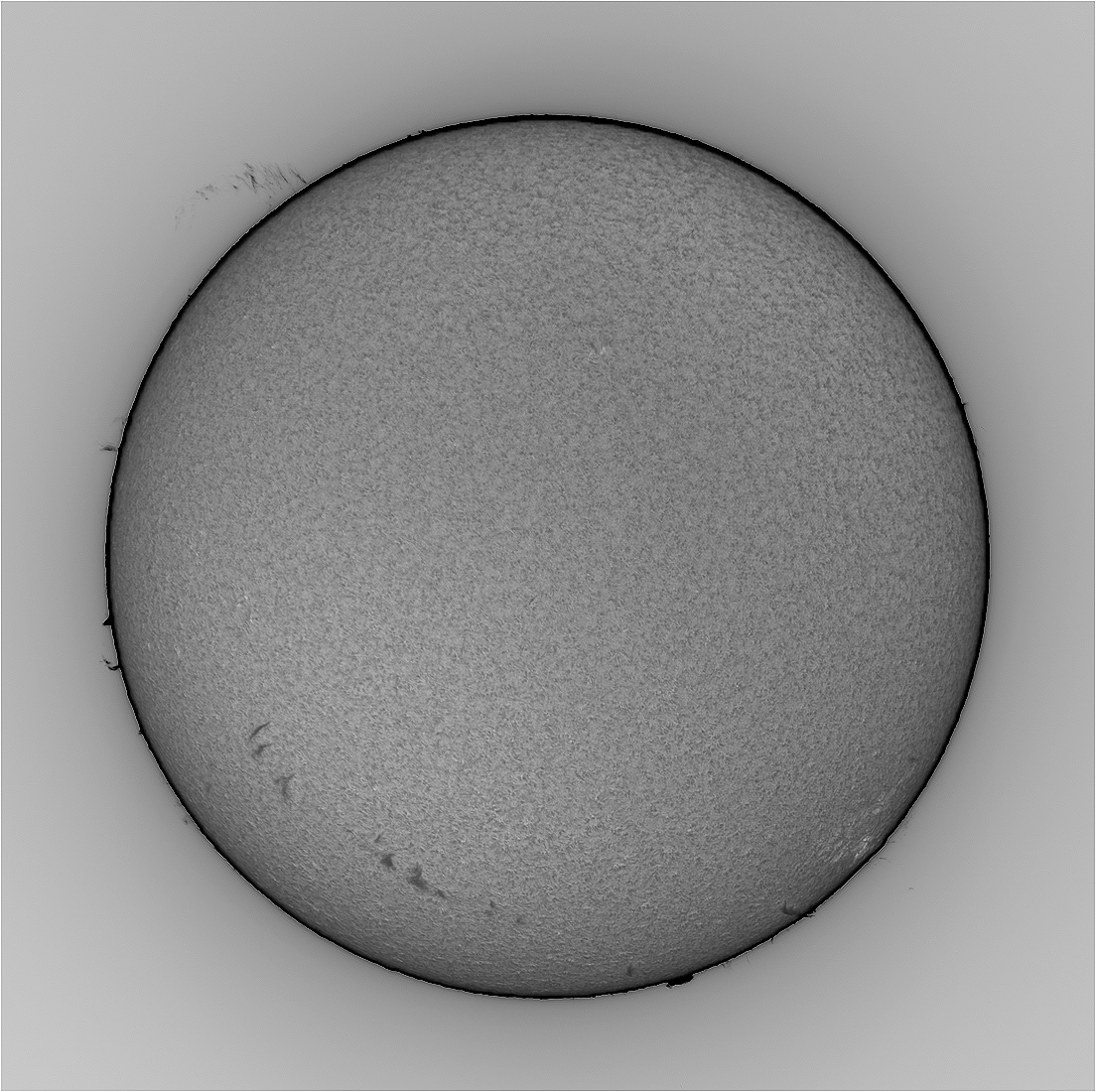 The string of dark filaments in the south was the most noticeable feature to my eye, but the large prominence in the NE made a much better show with the camera. In my mind, I think we have been have many of these large polar filament bands in recent months...anyone else feel the same?

I settled on the ASI290 to image with the modded DS CR-150 OTA in order not to push the image scale in the seeing I had. I finally got the SSM setup (but not configured to use in FireCapture) and the best readings were in the 1.5-2 range, but the majority of the reading were 4-6. I created a 6 frame mosaic of the filament band...the variable conditions are visible in the variation between frames but it still came out well enough:

There was one small spot of activity in the north near mid disk...not a lot of detail but maybe it will develop into something more: 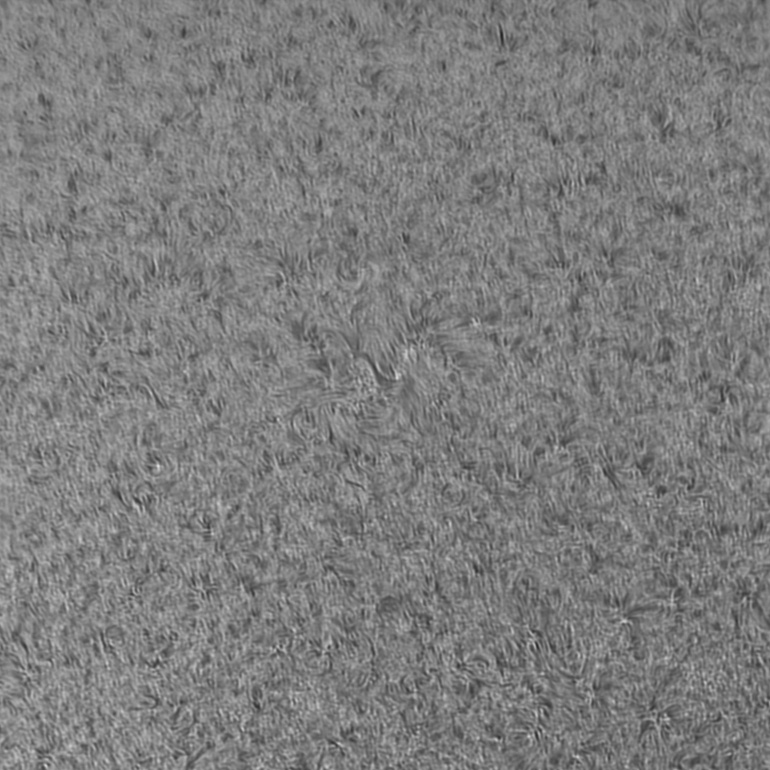 The final images try to highligh the proms. First pair is the is the big prom on the NE limb, and the last image is the small prom on the SE limb near the AR's: 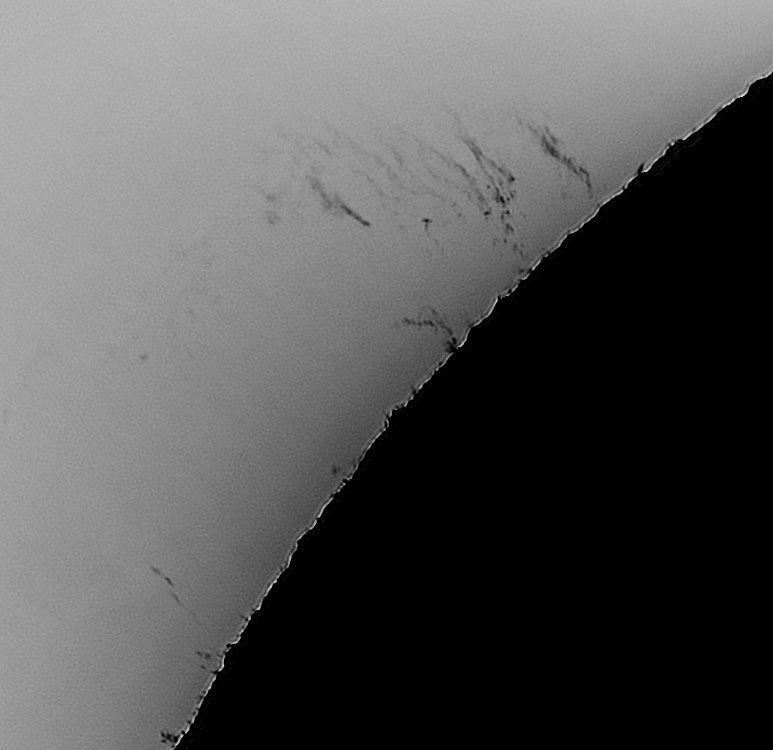 That's all from Saturday...it looks like we need some new activity to roll into view again

As always, questions and comments are always welcome.

Excellent set of images Brian and thanks vm for sharing

You got a really nice set here Brian. Glad the weather is being good for you for solar, even if it's not good for work...

Our weather has been completely screwy of late. We had snow Friday evening and it was -5 or so Friday night, so Saturday morning imaging still required a winter coat

Good to hear you managed to get a session in, Brian.

Nice set of images. Particularly like the big prom; nice detail in that one.

A beautiful set. AR in the north must have been hard to find.

Thanks for your feedback on the images...always appreciated

Very nice work Brian. I absolutely love the second colored full disc image. I never could visually see the large faint prom in the NE with my SMII60.

A beautiful set, Brian. The long prom stands out from the full disk images, specially the color one: what a beautiful sight ! Glad you caught it.

Wow!! I really love the second full disc, the prom in the north has really changed since I viewed it early afternoon here. It looks like it was lifting off. A great set

The weather here has been very dry for over a month and very cold too. Today the weather has broken with a huge storm, the wind is howling and rain coming down in horizontal sheets all day. A perfect English bank holiday Monday

Thanks for all your comments and feedback on the session...always appreciated

Also a big thanks for the full disk image being chosen as the photo of the day...nice to see that others like it too