Coronado SolarMax II 60 DS. 16x, 25x and 33x ( Ha )
Today I got seven active regions/disturbances in the scope before even looking at the GONG images! Seven is in fact what the GONG El Teide image shows. Two are seen in the northern hemisphere with one being numbered on the BBSO SM image. Five are seen in the southern hemisphere with four being numbered on the BBSO SM image.

I can see three active regions and four easy filaments in the SW quadrant. AR13147 is seen as a spot with scattered plage. A filament is seen just to the SW of the region. AR13148 is visible as a lighter but larger plage. A filament is seen at it's NW side. Two filaments are seen at the SE side of the disturbance with an elongated one being really easy. A small very fine filament is shown on the GONG El Teide image near the regions center but I could not see it with certainty. The SMII90 would have probably revealed it. ESE of AR13147 lies AR13151. I see it as an easy scattered plage with a small filament on it's NE side. An easy filament lies on the CLM. The last plages I see are two tiny ones in the SE quadrant. One lies just north of an easy double filament. It may belong to AR13152? Two more smaller filaments lie roughly west of this small plage. Another small but unnumbered plage can be seen near the SE limb. It's the most difficult disturbance to see on the disc.

The eastern limb shows four wonderful prominences! The southern one shows a lot of mottling and a southern streamer. By session's end the prom appears to have spread out a bit with the plasma coming more together north of the main prom body forming a northern streamer that touches the disc on it's north side. A void lies underneath. The GONG images show this very well too. The middle prominence looks like a sharp tooth that is denser towards the top. Another smaller but still easy prom is seen north of it. Northward still is a bright prominence with a streamer heading south. This one changes in the hour that I observed it in that it develops a tiny detached nodule of plasma very close to the southern streamer. GONG MLSO shows it VERY well. Better than I could see it visually. I did notice a small number of small proms elsewhere around the limb but I did not study them.

The mottles are easily seen today.

The NE quadrant shows two patches of faculae. The one furthest from the limb shows a tiny spot and two tinier pores. AR13149 is visible in the NW quadrant. I can see at least seven spots/pores here. The larger trailing spot has really dropped in size since yesterday and probably would not be visible by itself in the 8x32 SUNoculars as it was yesterday. The leading spot is still easy and shows umbra-penumbra structure. A patch of faculae is visible near the NW limb.

Three regions are seen in the SW quadrant. AR13147 is seem mainly by it's large spot. It still shows umbra-penumbra form though the spot had now rounded out and the umbralet has now exited the penumbra of the larger spot and became a spot of it's own just east of it's mother companion. ESE of AR13147 lies two spots that are associated with AR13151. I can see a few pores in the area around them. SW of AR13147 lies some low contrast faculae belonging to AR13148. They are better seen in the GONG WL image than they are visually.

The granulation is visible but is soft.


The music for today's session is Autumn by George Winston. 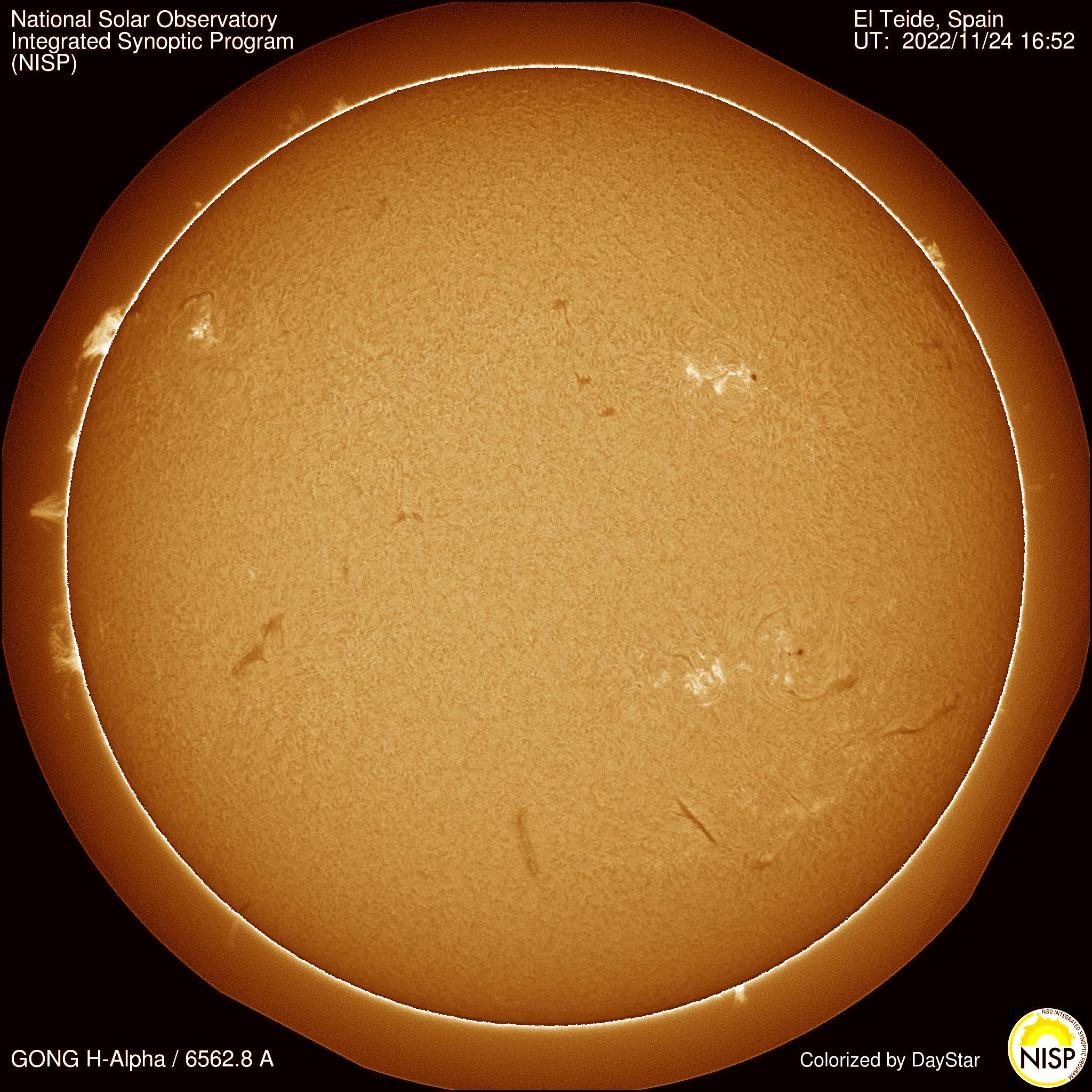 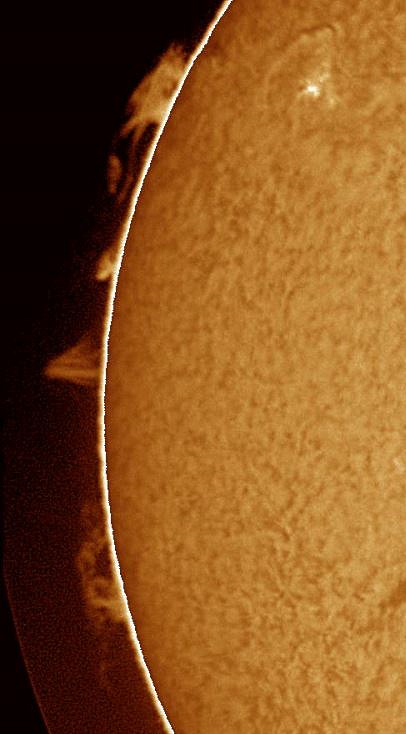 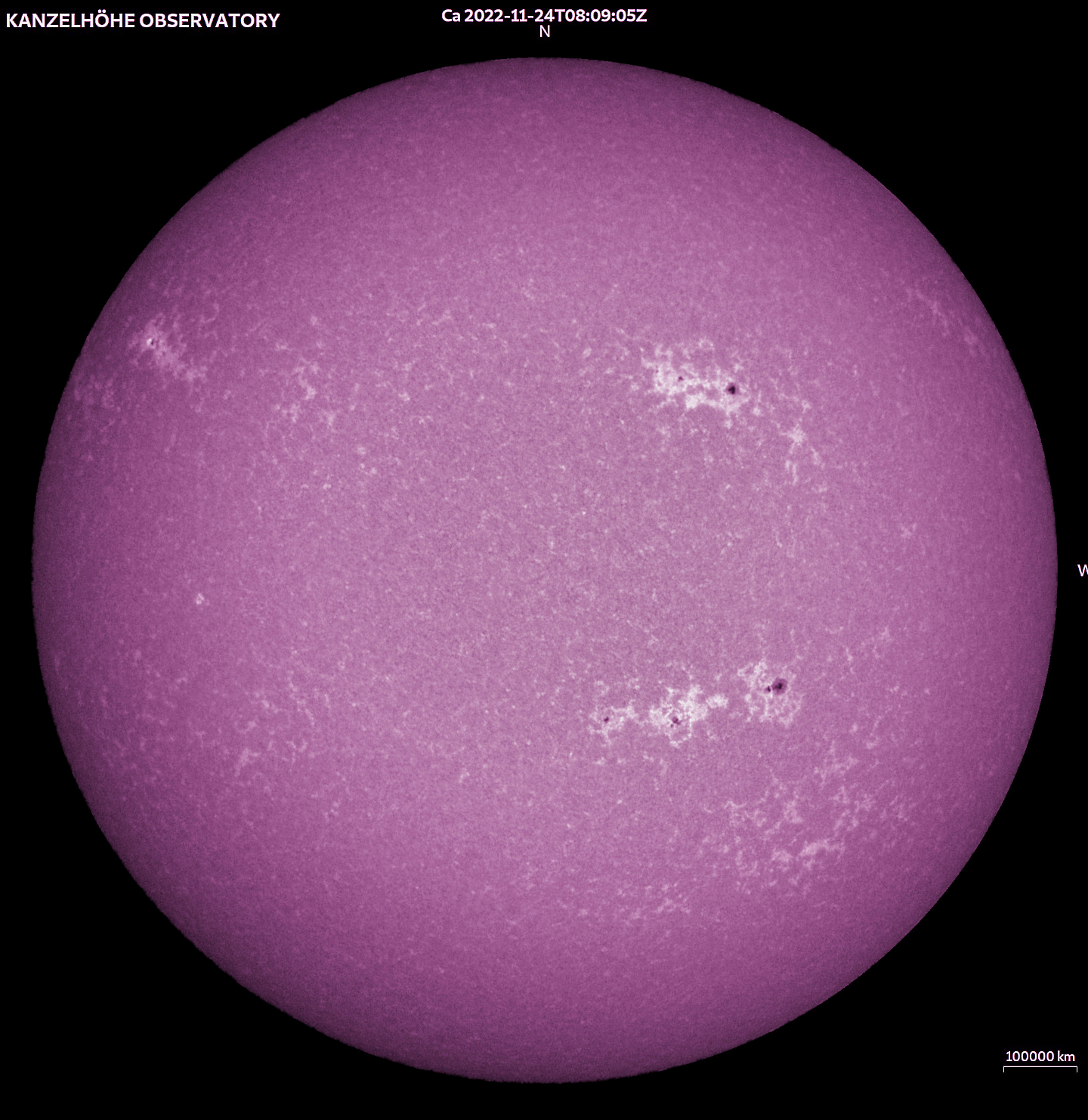 Hi James, Thanks for the report. I notice that Solar Monitor (your 1st image) has AR 3152 in the wrong place, it should be the area near the NE limb.
Cheers, John W.

That doesn't surprise me. I have seen that happen before. More commonly with SolarMonitor but I have seen SpaceWeatherLive have issues too. Thanks for the correction. It makes more sense with the larger plage in the NE being labeled Vs the tiny one in the SE.

Nice report James, cool you got some time out...Sounds busy too, Thanks indeed

Thanks and You are welcome, Aaron.

Thanks for the nice report James.

You are welcome Maurits.

Sounds like a lovely view James, it is super when there are lovely prominences to enjoy

Montana wrote: ↑Fri Nov 25, 2022 3:25 pm Sounds like a lovely view James, it is super when there are lovely prominences to enjoy

The prominences were really nice. I was hoping to image today with the SMII90 but we have family over and the skies are mostly cloudy. The faithful little Lunt 8x32s came to the rescue yet again. I'll post the results shortly.

You got a decent hour in there James!

It was fair the middlin’.