Anyone going to try to measure the bending of starlight?

Anyone going to try to measure the bending of starlight?

An amateur astronomer succeeded in seeing the deflection of starlight in 2017. I'm thinking about giving it a try. It's pretty risking putting in a lot of effort if the weather turns out to be uncooperative.

I attach the two papers he wrote about his experiment. The first one is his plan written before the eclipse and the second are his measurement results, which turned out to be in perfect agreement with General Relativity.

His choice of location (Wyoming) had a very high probability of good weather. If I did it, it would probably have to be in New England (rather lower probability).

After studying his instruments and the results, I suspect a much smaller telescope and camera could achieve a result (which also means a smaller mount).

In the work above (from Donald Bruns), the telescope used was a TeleVue NP101is. The focal length of this telescope is 540mm. It was masked to give an 87mm aperture, meaning it had a 6.2 f-ratio.

The camera used was a Finger Lake ML8051, with 5.5 micron pixel size, 3296 x 2472 pixels, 18.1mm x 13.6mm sensor size. Given the somewhat older technology of the camera, it took about 2 sec to digitise, download and save each image, which turned out to be a constraint on the data acquisition.

An essentially equivalent setup would an 80mm f6 telescope with a ZWO 1600 camera (17.7mm x 13.4mm sensor size, 3.8 micron pixels). This camera can do 23 FPS at maximum resolution, so it is possible the data acquisition rate might be higher than the Bruns experiment (it is primarily limited by the exposure times).

A red filter was used to limit the spectral response to approximately 560nm to 690nm (both to reduce blue light scattering but also to reduce atmospheric turbulence). An APO quality imaging system is therefore probably not an essential feature.

The Tele Vue telescope, being a Petzval design, has an image circle of up to 50mm, probably larger than necessary for a 22mm diagonal sensor such as the ZWO 1600. Also, the key part of the experiment is to characterise and calibrate the optical distortions of the telescope, therefore a flat-field design is not strictly necessary.

Typical exposure times were on the order of 2 sec, therefore thermal noise is likely not a major contributing noise factor. Quite possibly an uncooled sensor could be used to save weight and complexity.

Using a smaller, lighter telescope and a much smaller, lighter camera would mean a much lighter mount could be used (than the MyT Paramount Software Bisque used by Bruns). The 2 sec exposure times mean that only moderate tracking accuracy is required (although good polar alignment is very helpful). A computer controlled Vixen GP2 equivalent is likely sufficient for this purpose.

Would be a fun experiment to do!

I made contact with Donald Bruns and he confirmed that a few people will attempt to repeat the experiment in 2024. He said most people were thinking along the same lines I was. The most popular camera choice seems to be the 1600MM, although a few are choosing the larger 2600MM. Several are using the TeleVue 101, although some are using refractors in the range of 80mm to 90mm. As I suspected, camera sensor cooling is probably not essential. A Baader Red CMOS filter seems to be suggested to sharpen the star images.

There are three sites for the experiment: Mexico, Texas and New York. Rather than a range of exposure times, a large number of shorter exposures is thought to be better (since modern cameras have faster download times). Scripts are being written for SharpCap to automate the acquisition process.

Excellent idea ! Verifying Einstein's general theory of relativity again !
I have to read 21 pages of the article, excellent reference to work on to verify the bending of space time !!!

I've just had a read of both papers, interesting!

Good to see see Christian getting a mention too.

Seems quite an achieveable thing to do for future eclipses.

I joined the groups.io board (Modern Eddington Experiment 2024 MEE2024@groups.io) to catch up with their state of play. Looks like there will be around 10 setups in 3 locations (Mexico, Texas and New York) designed by a few current and former college professors and manned by undergraduates. A variety of telescope focal lengths and camera sensor sizes are planned (generally 80mm to 100mm apertures).

Using modern high-speed CMOS cameras (1600MM, 183MM, 2600MM) they can take many short exposures (around 100ms to 200ms) and integrate over 60 seconds or so in a couple of different star fields (total eclipse time is around 4 minutes, one of the longest lately). They seem to be using the Baader Red CMOS filter to reduce seeing effects and increase sky contrast.

I made the point that this is more like a planetary/solar imaging experiment than a traditional deep sky observation. Lots of single frames to sort through and stack. I suggested that single SER files might be easier to deal with than hundreds or thousands of FITS files.

There might even be some merit doing something like AutoStakkert does with regards to a quality analysis / sorting of the frames to reduce seeing effects, which I think is the fundamental resolution limit. The experiment is not diffraction limited in the traditional sense since you are not trying to resolve closely spaced features but rather trying to accurately find the centres of widely spaced points (stars).

I also made the point that dealing with a very large sensor (they have a pair of 6200MM full frame cameras) might be less efficient than using smaller sensors (and maybe smaller pixels) and forming a mosaic of the star fields around the Sun -- and in fact not even imaging the solar disk and corona at all (it takes up a large area but has no visible stars). The smaller sensors have a faster download time (higher full-frame fps) so there is less deadtime when exposure times are short (less than the inverse of the max fps). Also, smaller sensors will use the central part of the telescope image circle where optical distortions are considerably lower.

Using IronPython code to write scripts for SharpCap to control the mount and camera is something my friend Jean-Francois Pittet has done to automate spectroheliograph imaging. It seems something similar can be done here to record the eclipse star fields.

Donald Bruns sent me a photo of the setup he is building for the April 2024 eclipse: 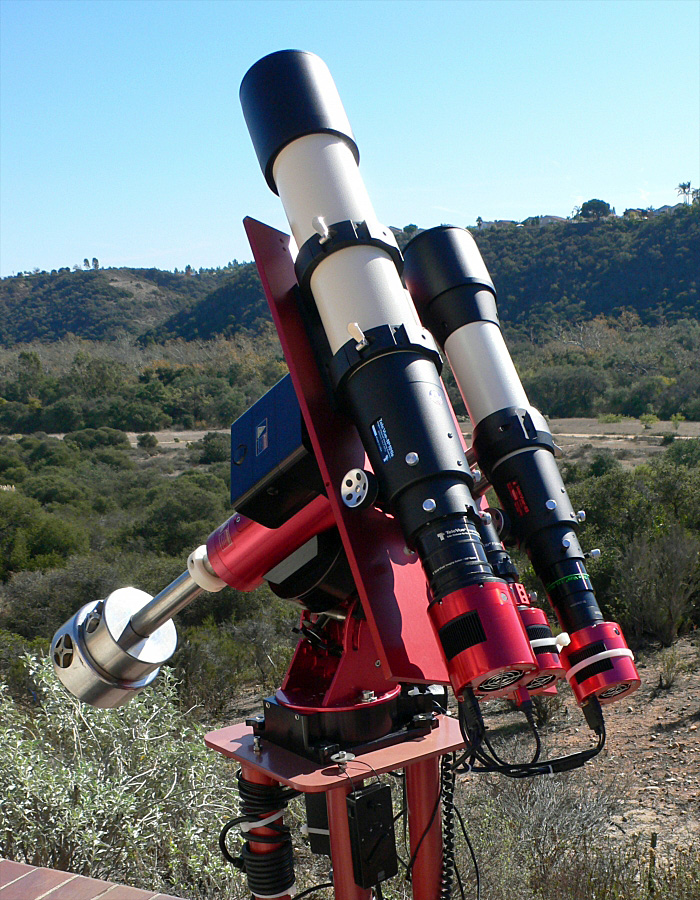 I am put together a preliminary equipment setup that I think fulfills the requirements of the experiment and can also be transported by plane (telescope and optics in a carry-on foam-padded hard case; the mount disassembled in a large suitcase). 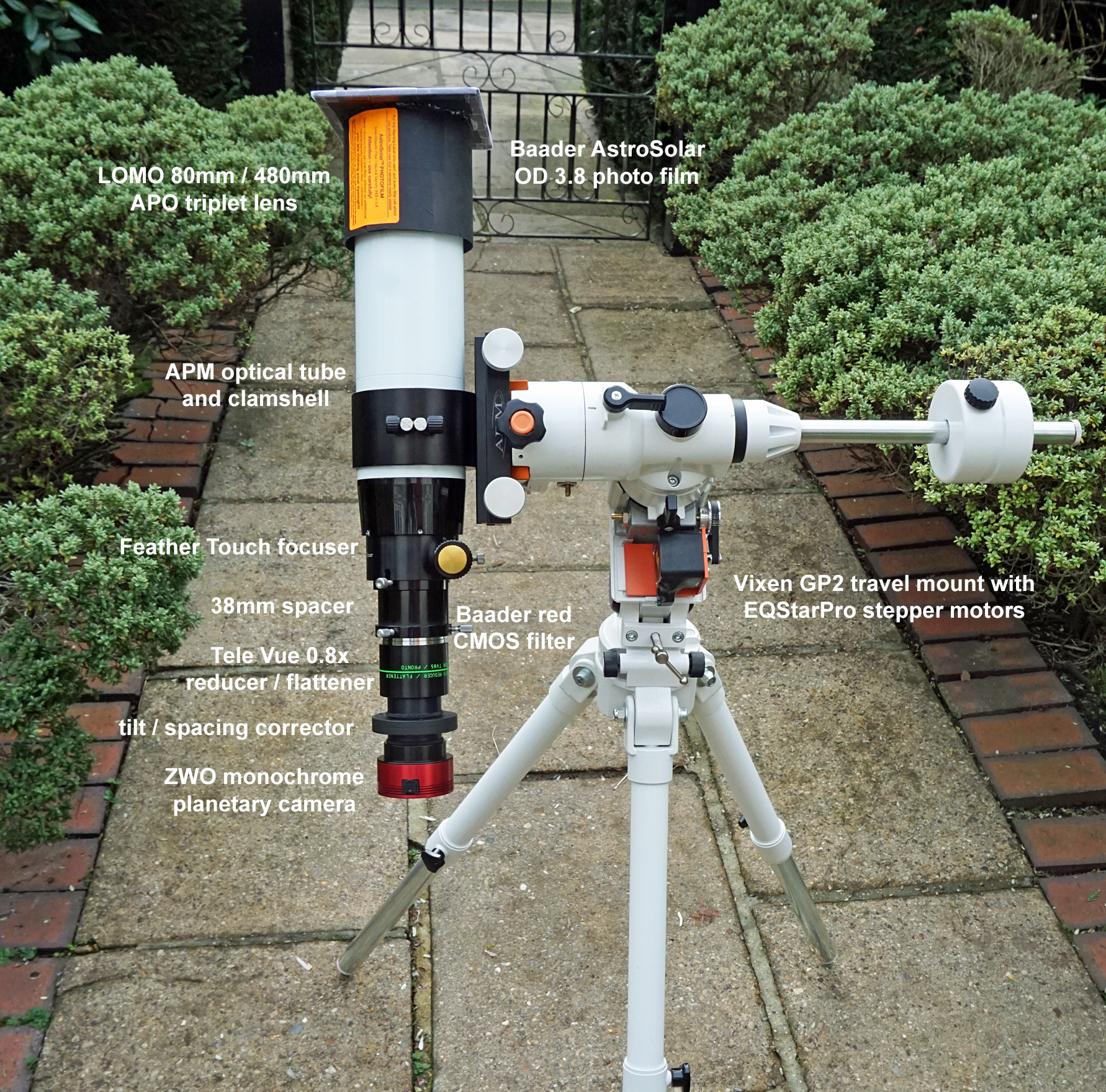 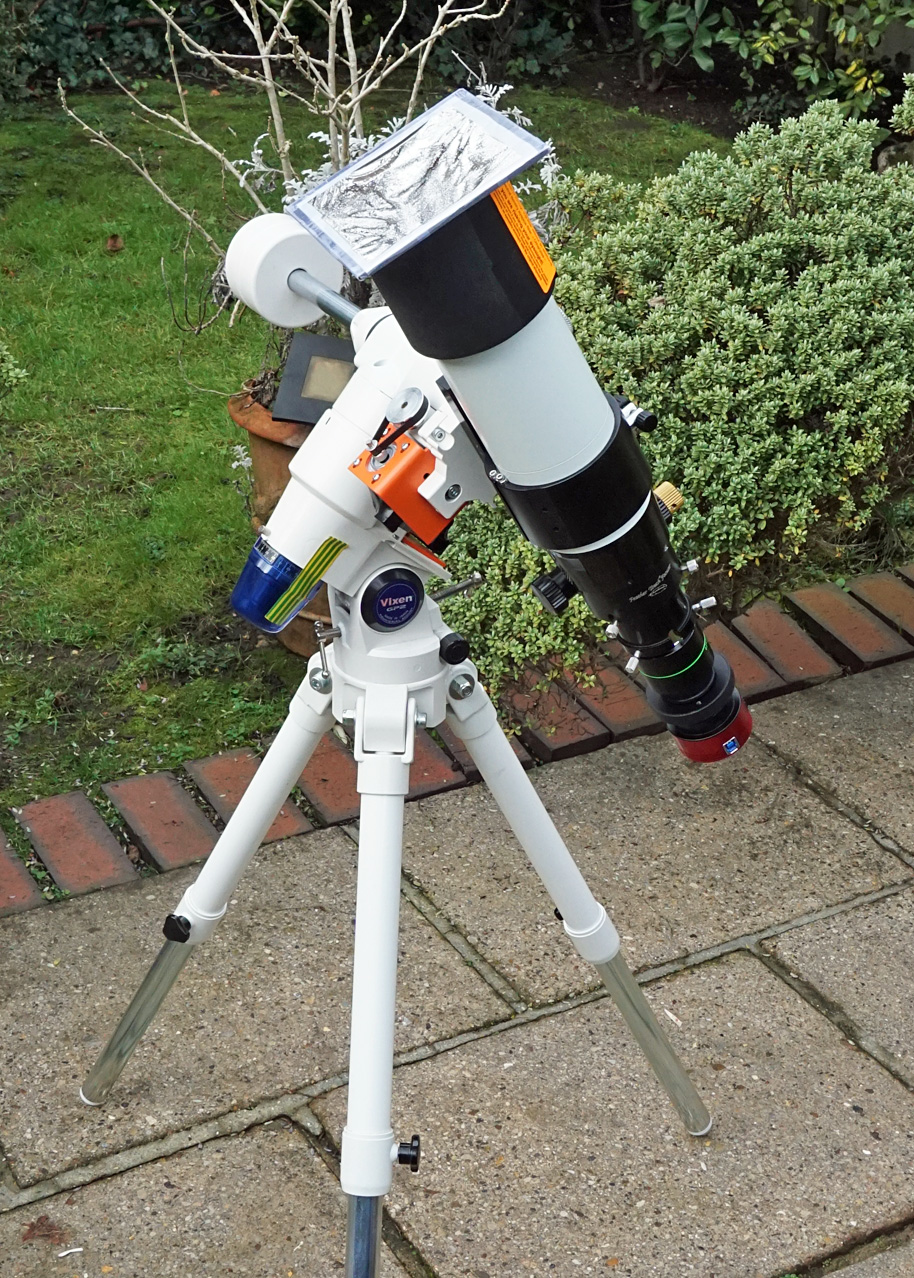 I also built a Baader AstroSolar photo film mask (for before and after the eclipse). I will probably eventually add a ZWO EAF electronic focuser (I have one already on my SHG). Most likely, I will acquire a ZWO 294MM camera for the experiment itself. I'm testing now with the 174MM and 183MM, which have the same backfocus as the 294MM.

This setup is considerably smaller and more compact than previous equipment used to measure General Relativity. The overall equipment size to some degree scales with the camera's pixel size. As the pixels shrink, you can reduce the telescope focal length and, keeping the same focal ratio, reduce the telescope aperture. This then allows using a smaller and lighter mount. I think using an uncooled planetary CMOS camera is likely sufficient given the short exposure times (less than 1 sec), which reduces the size and weight of the camera considerably. The high data rates with modern CMOS cameras allows collecting much more data during the few minutes of eclipse, which should improve the measurement accuracy.

For comparison with one of the original experiments, here is the equipment transported to Sobral, Brazil to observe the 1919 total solar eclipse: 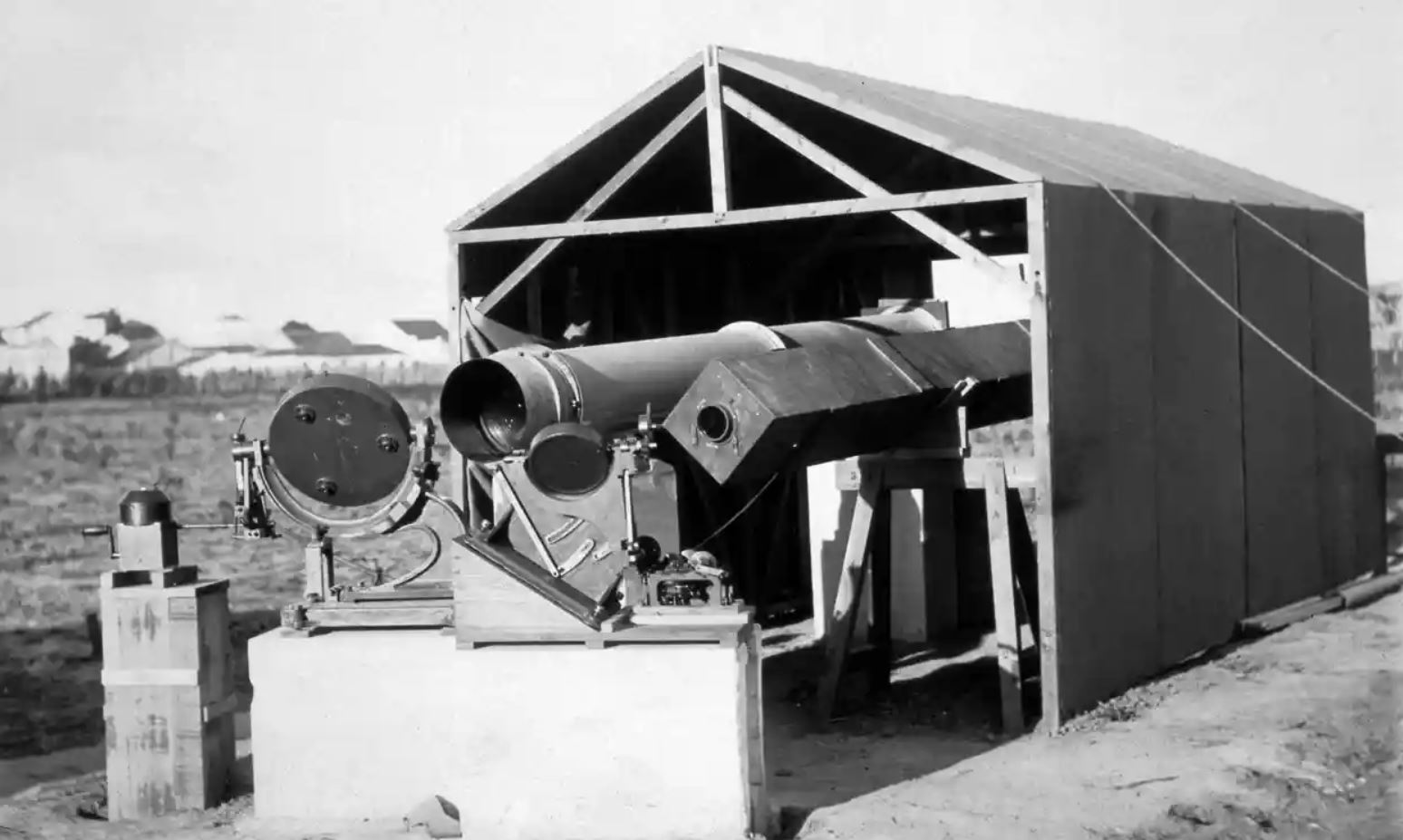 
The telescope on the left had an aperture of 13 inches and a focal length of 11.25 feet. The lens was stopped down to 8 inches. The smaller telescope on the right in the square wooden box used a 4-inch aperture and had a 19 foot focal length. Both telescopes used coelostats (of 16" and 8" diameter) since suitably large mounts could not be brought. The large telescope used glass photographic plates of 16"x16" and the smaller one of 10"x8". It turns out for various reasons that the smaller 4-inch telescope gave much better results.

This is incredible. In many aspects of astronomy amateurs are making inroads on what was previously only possible by professionals. Narrowband solar like Ha and CaK, SHGs, spectrography of stars, finding exoplanets, magnetometry and now measuring the bending of starlight around the Sun in verification of General Relativity. Now let's see if an amateur space telescope ever goes up. One was planned in the past but it never happened. And will amateurs ever break 100" of aperture on a telescope!? I would love to see an amateur radio telescope that could isolate the Cosmic Microwave Background radiation too!

The sky is no longer the limit. But money often is and that is the main advantage pros have. They are generally more educated too.

Looking at those cameras I do believe with the continuing advancement of astro-cameras that the DSLR's reign will soon come to an end for astrophotography.