Brian: You asked for a few more details about how the mod was done. Let me first say that the history of this is based on work done by Mark and Walter using the Lunt and PST Ca-K filters. Essentially, the Lunt and the PST have yellow-looking filters that apparently have a narrow "notch" in their spectrum. It is the yellow filters that give the narrow bandpass at 393.4 nm. The rest of the Lunt and PST Ca-K equipment is an ERF in front and then a blocking filter for longer wavelength light. As it turns out, the ERF can be replaced by a Herschel wedge and the blocking filter by a Baader K-line filter.

Why would you want to do such a mod? Well, for the PST, you would generally do it if you wanted more aperture. For the Lunt Ca-K module, it's not so obvious there is much to be gained since the module is rated up to 100 mm diameter and there's probably not too much to be gained going above that. The extra components are also quite expensive and I'm not sure there is a significant improvement in performance. There might be, but I haven't really confirmed it yet.

My original motivation for doing a mod on my Lunt B1200 in-line module was to use it with a Solar Newtonian mod (see my previous post "130mm Solar Newtonian with Lunt CaK Mod -- 2nd results"). The idea here was to build a large aperture, low focal length telescope with little optical aberration at 393 nm. The system worked reasonably well, although getting a daytime telescope properly collimated and keeping it collimated is not so simple. So in the few times I've used it, I don't think I really got the most out of it.

In my more recent post ("27 Oct -- CaK mod showing interesting flares"), the previous mod was altered by adding a Herschel wedge and using it with a 107mm triplet refractor. The Solar Newtonian basically acts as it's own Herschel wedge since 96% of the light goes out the back though the unsilvered primary mirror. The following photo shows the complete integrated Ca-K wedge assembly: It consists of a 1.25 inch APM Herschel wedge (the same item is branded Lunt these days), a Celestron 1.25 inch T-Adapter (they seem to be available easily and cheaply), and a ZWO 120MM camera. The camera has a native female T thread so the Celestron adapter fits into it very securely. The camera also seems to have very good response near 393 nm, much more so than a DMK 41 (my preliminary estimate was about 4 times more sensitive; see my post "130mm Newtonian Mod + Lunt CaK Mod -- first results"). The next photo shows the three components disassembled: 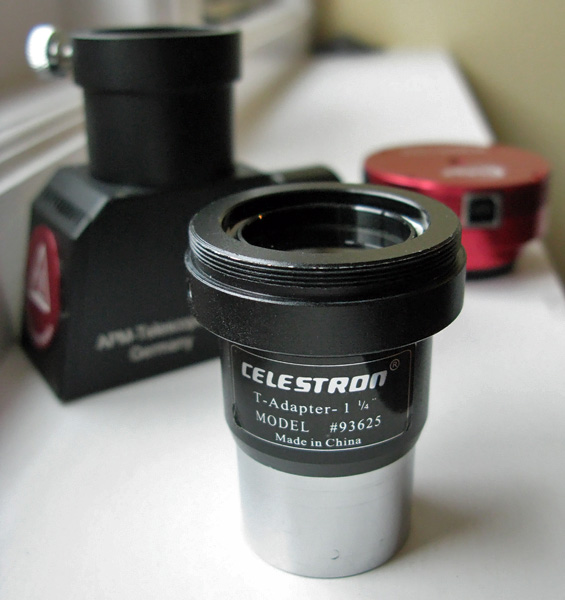 All the interesting filters are inside the little Celestron adapter. Basically, this adapter is a tube into which you can drop lots of 1.25 inch filters. I think it was originally designed for "eyepiece projection", a technique no one really uses any more (instead we typically do "prime focus" with a Barlow). The idea was to drop a 1.25 inch telescope eyepiece (for example a 12.4 mm Plossel) into the adapter and project a magnified image onto the camera film plane. But this legacy adapter turned out to be very useful for the Ca-K filter mod.

First, I dropped in a Baader K-line filter. Then I dropped in a 31.5 mm diameter disk made of black foam board into which was cut a 12.5 mm hole. On top of the hole, I placed the yellow filter from my B1200 module. On top of the yellow filter, I dropped a second disk of black foam board (buying a compass knife is incredibly useful for cutting foam board). On top of the second foam board, I positioned a polarisation filter. The polarisation filter (which also attenuates by 15%) is to try to control problems with Newton rings (see final image below). The Celestron adapter comes with a retaining screw at the top to hold and position an eyepiece. I replaced this screw with a set screw (called a grub screw in the UK) to make it tidier and also so it was less likely to be loosened. This screw held the polarisation filter firmly in place and everything below it is under slight compression. The precious yellow filter is held firmly yet gently between the two pieces of foam board. Here's how it looks from the top: There is a bit of paper around the edge of polarisation filer to keep it better centred. You can see the slightly jagged hole cut in the top foam board and the magic yellow filter below it. The final question is how to get the yellow filter out of the Lunt module? This little square filter can be easily extracted (and replaced) from the back of the module using what's called a camera lens spanner wrench.

Here is an animation made of flares coming from the recent big sunspot (similar to the one shown in my earlier post "27 Oct -- CaK mod showing interesting flares"). I think you need to click on the image to make the animation work. The results are good and are probably the best Ca-K images I have taken. Perhaps it's due to the mod, perhaps due to other factors; it's hard to say with only one test.

To show that there are still some issues, here is an image taken with a 2X Cemax Barlow. There are clear interference fringes noticeable all across the image. These fringes are only barely visibly in the previous animation images (which were not taken with a Barlow). If I change the camera to a DMK41, the fringes also disappear completely. I have heard that the Aptina CMOS chips are prone to interference problems when used with highly monochromatic light. Another nice feature of this setup is I can quickly and easily take out the Ca-K filter stack from the Herschel wedge and replace it with another filter stack consisting of ND3 filter, Baader Continuum and IR block filter to look at "white light" images.
Last edited by thesmiths on Sun Nov 09, 2014 3:20 pm, edited 2 times in total.

a very fine report on that mod, congratulations, good outcome

Just to add my experience with a setup similar to the one described in this old discussion: Baader Cool Ceramic wedge + Baader K-line + Lunt Ca-K module (etalon only) 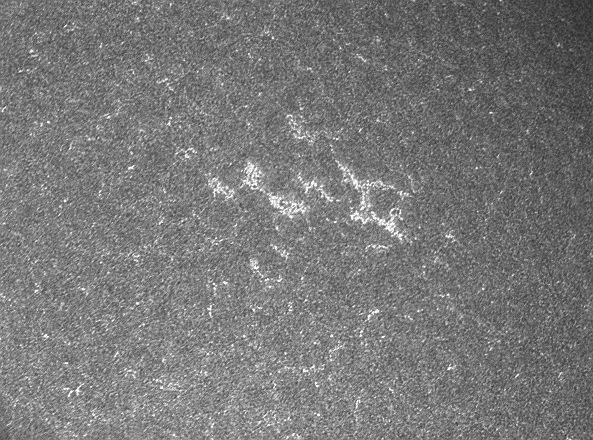 the above is a low res image, still to investigate if there is enough light with my scope (115 mm) for taking hires images, need a better seeing to try. First results (the purpose is to avoid the use of a blocking filter for protecting the etalon) seem promising.