Frankenscope? Let's see it!***be advised that NOTHING in this forum has been safety tested and you are reading and using these posts at your own peril. blah, blah, blah... dont mess around with your eyesight when it comes to solar astronomy. Use appropriate filtration at all times...
Post Reply
10 posts • Page 1 of 1

A quick post about a revision I made to my modded Celestron CR-150 OTA/Lunt DSII etalon mod.

I have been wanting to set up a double stack on this system but never had a lot of time to pursue it...had been thinking of trying a Quark but wasn't prepared to shell out the cash without knowing if it would work.

What I wound up doing was hiving a local machinist make a threaded adapter to allow mw to mount the primary Etalon out of my LS80T at the rear of the donor OTA, and then install the DSII module for a DS system. I had a very short window to assemble and test yesterday over the noon hour...terrible seeing and strong winds made for an interesting first light. 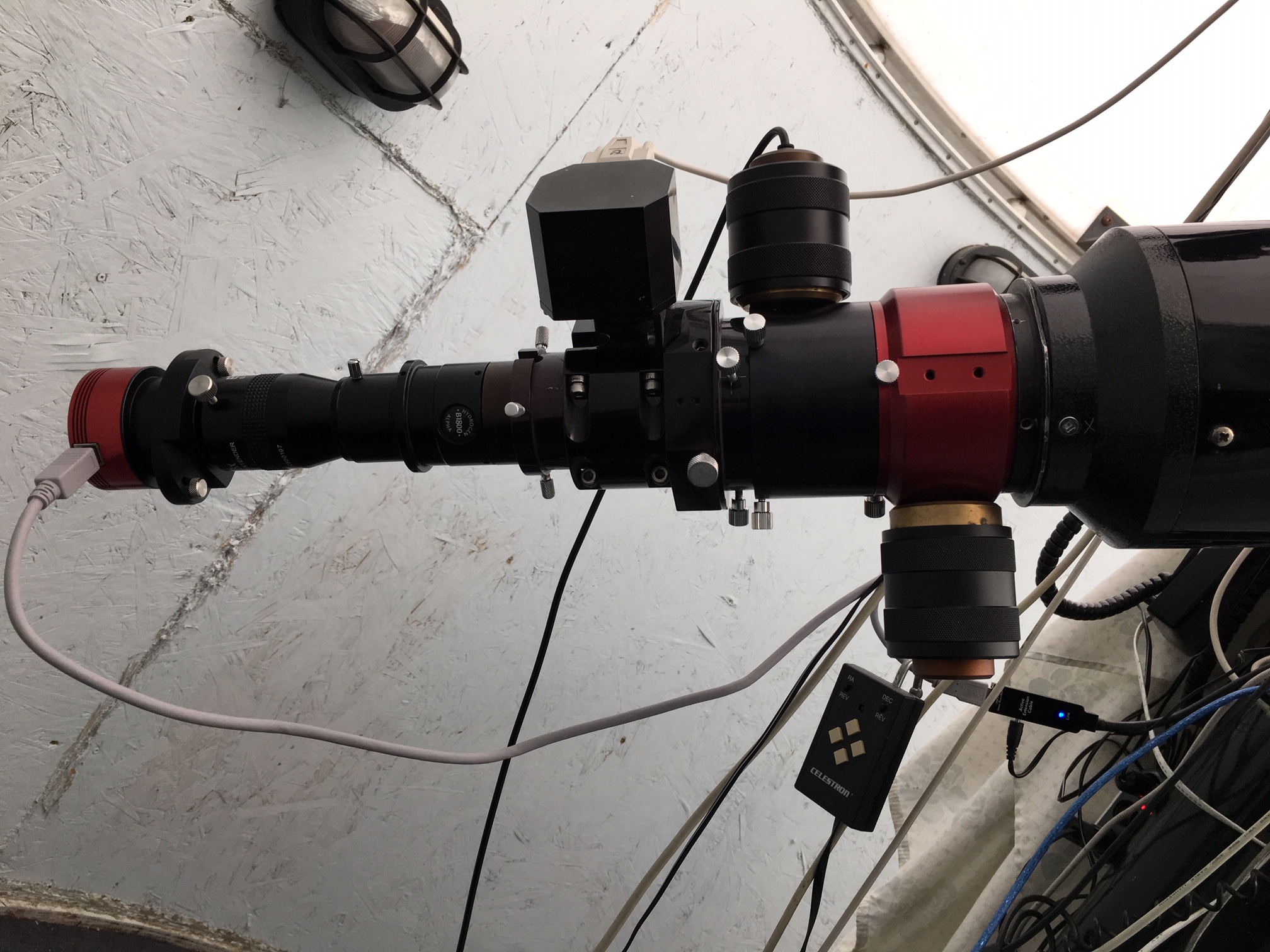 First are a few images in the single stack mode: In the DS mode it does improve the contrast: 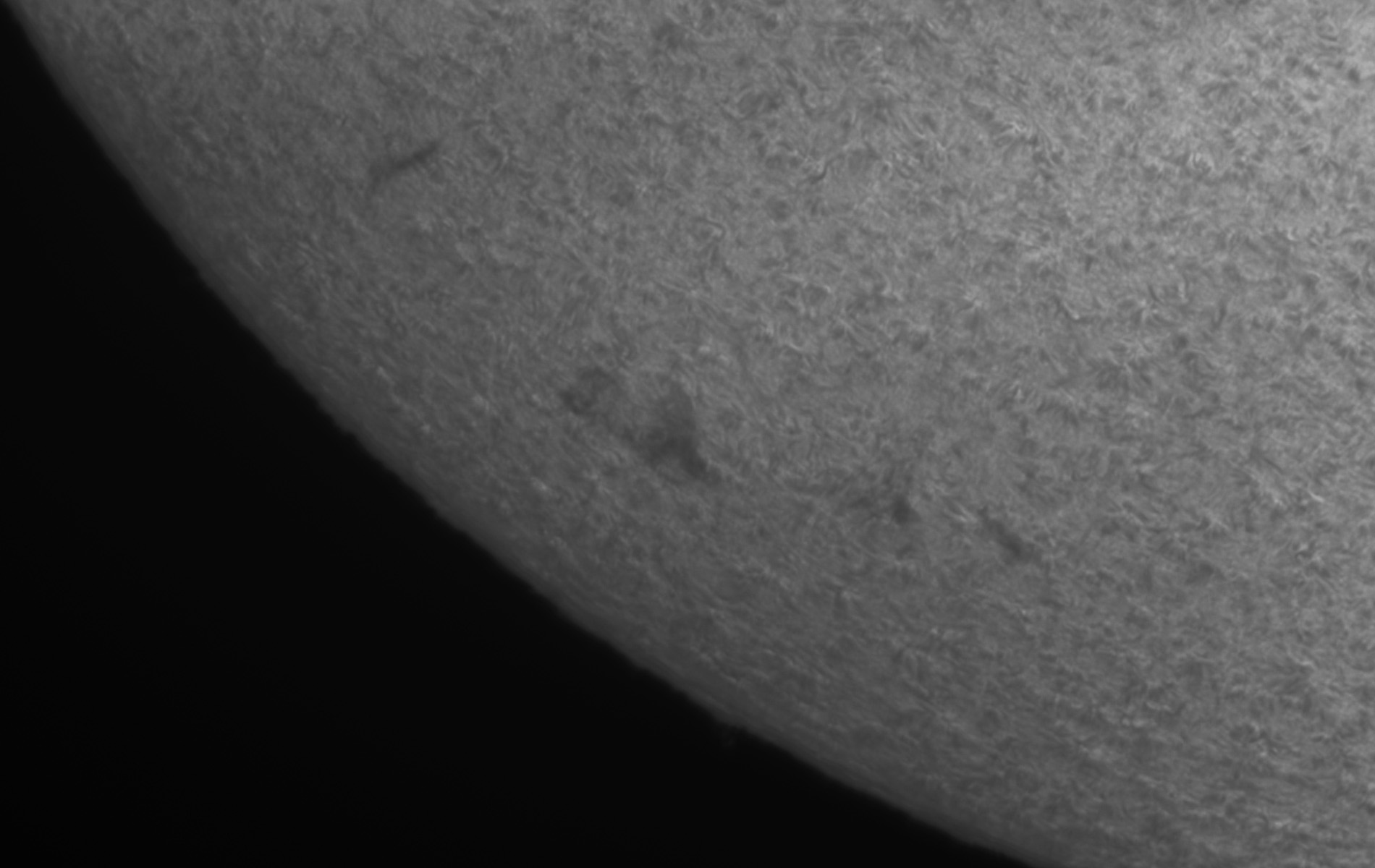 Just a few points on the images...no flats (some dark banding in the DS images) and no alignment checks due to time limits. I just assembled the pieces and shot the test frames before I ran out of time. To seal the trial off I had clouds roll in until I was back to the office

Waiting on another sunny day to test things out some more.

Questions and comments are welcome...how do the modders in the group see this???

Another pending Mod is to fit the DSII to the C9.25 Edge as a single stack. A trial looked promising but my temporary housing wasn't rigid enough to stop the flexure. I'd like the ability to run this and use the pressure tuning to do quick on-band/wing images and when the seeing is good switch to the Quantum for the more narrow bandpass work (0.45A).

Nice setup Brian, it seems working really fine. I don't have a DS module for my Lunt mod however my Quark increases contrast dramatically compared to the SS.

Thanks for the feedback on the setup. I hate to keep the LS80 in pieces and it does such a nice job on full disk images. I had been thinking of trying a Quark without the built in barlow as a DS unit (the photoshereic one might work ok as I'm not trying to beat the Quantum) but I don't have one to experiment with.

The ES tele-extenders are relatively telecentric...I've used them for years and seem to work as well as the Powermates. Teleview doesn't have the 3x, and these fit my budget a bit better too

Thank you for the info, I am planning to purchase a 3x amplifier because my Powermate loses amplification with the distance from the lenses. Best would be a Baader TZ system but it costs much more.

I see that Explore Scientific has just introduced a 2"version of the 3x extender. It isn't as much an issue with the Ha system (1.25" blocking filter), but I prefer to reduce as many adapters (2"-1.25") as I can to keep the collection of optics as well aligned as I can. If it will fit ahead of the blocking filter that might help, as opposed to putting the extender between the camera and blocker.

It will be a good option to use with the WL and CaK filters since they are 2" and I could get rid of the reducers.

Wow Raf, that looks great! Congratulations!
No double limb at all anymore with the DS.

I looks highly promising for the new season in spring

Brian, are you using the extender for extracting the focus or just to enlarge the image ? In my Lunt mod I barely reach focus with my Chameleon so I inserted a Powermate between the focuser and blocking filter.

Thanks for all the feedback on the setup. Cloudy/rainy Thanksgiving holiday weekend has set in here, so more testes will have to wait. Maybe a nice big AR will appear next week to use as a test subject

Raf, I use the extender to bump the focal length/image scale. I also have an Airylab 2.7x telecentric to try as well, though I need to find some adapters to fit it into the system since it has all threaded connections.