There's not much of a show going on the Sun today so I will show you the setup I use to capture solar images. What it lacks in elegance it make up in uniqueness. I typically send the native f15 beam through a 2x telecentric feeding the etalons at f30. The Quark Combo does a fine job alone as does the Solar Spectrum with either allowing sub 10ms exposures, depending on gamma settings. Not until reading Bob Yoesle's writings about the dreaded double limb did I realize that it was undesirable and must be eliminated. Kidding aside, I learned something useful and stacked etalons to narrow bandwidth and suppress photospheric leakage. While I have had success minimizing the double limb effect, using just the Quark Combo, by selectively matching limb and surface brightness through post processing it was not easy nor perfect. Examples below. By double stacking the Quark with the Solar Spectrum suppression of the double limb can be achieved at the cost of exposure and uniformly with the etalons I'm using. There is no blocking filter in the Quark Combo when double stacking. 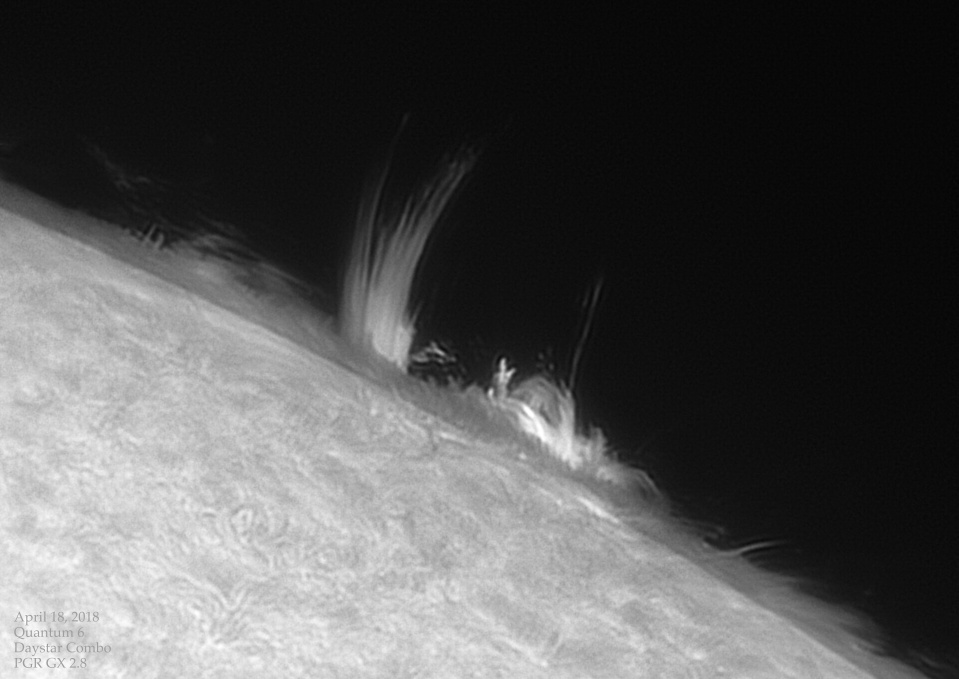 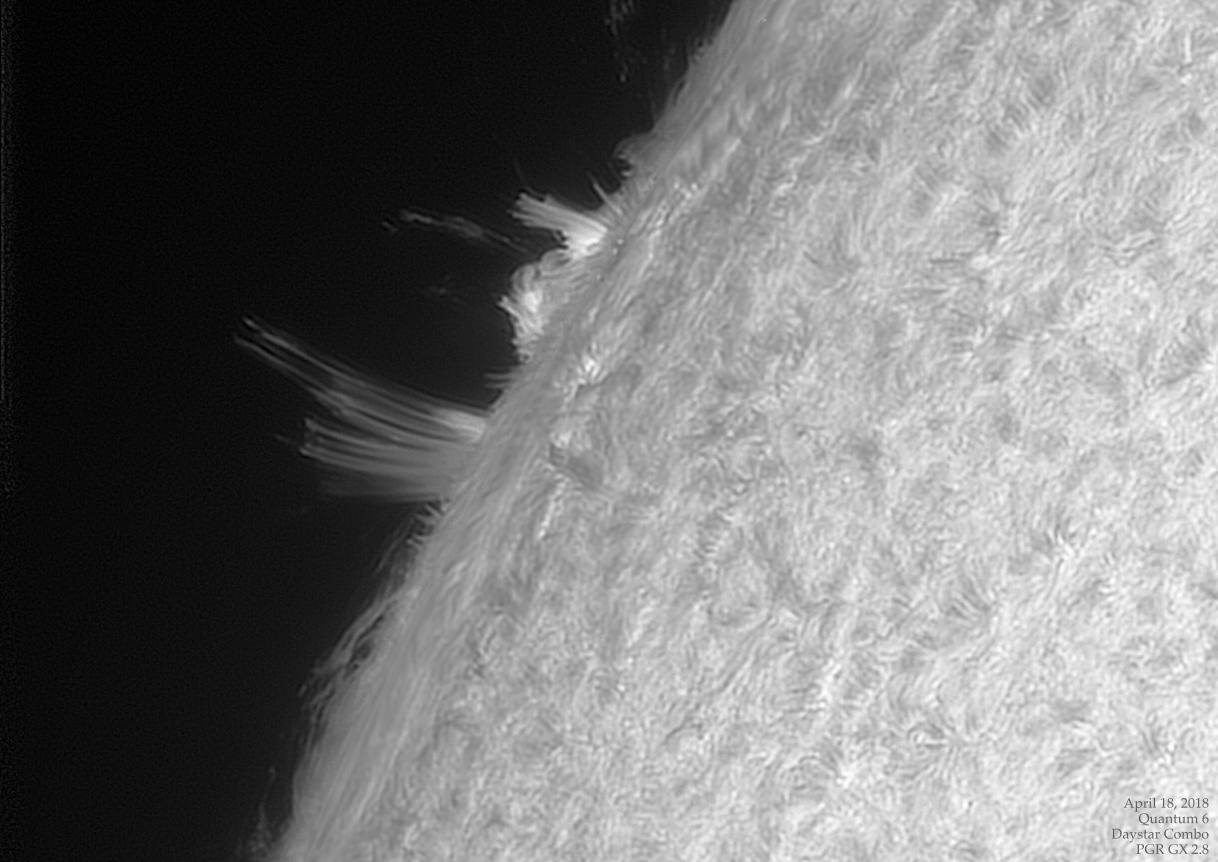 
Typically I run the camera at gamma setting that produce a contrasty image for surface details and never fill the histogram much more than 60%. This has resulted in exposure times of about 25ms which is quite long for anything but the steadiest of sky conditions. Proms of course require low contrast settings and the histogram almost full but exposure times are still too long with this setup. The Quark alone does the best on proms so far. I would be interested in learning what works best for you without having to hand select particular etalons.

I've had three beautiful clear days in a row with turbulent seeing and nothing to image. Hope that changes for the better for all of us.

These are amazing images if only through the Quark

Yes, those were Quark only. My third Quark to be specific so I know what you mean. The Solar Spectrum was not available at that time and the results may have been better. Thanks for the kind comment.

That's a very creative setup Phil, I like it!

How uniform your Solar Spectrums 1.5 0.3A is? What is a typical exposrure time when imaging with it? Same with Quark, please.

Can you share with us typical images in a single stack mode for Quark and for SS etalons? Better in the center of the sun disk.

I welcome the opportunity for your opinions on the Quark and Solar Spectrum etalons. I have numerous examples of the Quark single stacked but do not have any single stack examples using this Solar Spectrum etalon yet. Mark Wagner sent this one in November stating it had higher transmission than a previous one and I agree but have no data to show at this time. I will try in the next few days.

This Quark has a very uniform field illumination and typical exposure times of 10ms or less without any focal reducers. I will check the camera logs for settings and post images soon as I can. All current images have a flat frame applied so they will be uniform in illumination. I'm not experienced enough to evaluate bandwidth uniformly.

The SO 1.5 0.3 in not as uniform and is more contrasty compared to the Quark as I expected given the tighter bandwidth but I'm no expert. I would like to post some images without flats applied for your evaluation also.

On the website each image has a brief description of the equipment used in a corner of the image and is readable when the full res image is downloaded. No exposure data though.
http://www.astrophil.com/astrophotos/Q6sun.html#0

Not until reading Bob Yoesle's writings about the dreaded double limb did I realize that it was undesirable and must be eliminated.

Yes, it's true - apparently a cult of righteous Double Limb Slayers has developed and is dedicated to eliminating for all mankind the dreaded Double Limb! Really like that setup on the quark and the images look awesome...that second surge prom as Stuart mentioned is superb

Stu, I appreciate the comment. It means a lot coming from someone who knows something about surge proms.

Bob, that's hilarious! Glad to see that you have a sense of humor. Levity is sorely needed in this sometimes super serious subject of solar spectrum sleuthing.

Brian and Eric, I know the equipment is a little unconventional but sometimes you just gotta "run what you brung". I was lucky to catch that prom. Thanks

How uniform your Solar Spectrums 1.5 0.3A is? What is a typical exposrure time when imaging with it? Same with Quark, please.

Can you share with us typical images in a single stack mode for Quark and for SS etalons? Better in the center of the sun disk.

Here is a single stack Solar Spectrum SO1.5 0.3 image taken with a PGR Grasshopper GX camera. Astro IIDC software was used and set for maximum contrast (gamma), minimum gain, 7.78 ms exposure. A focal reducer was used resulting in a .74 reduction from the f15 scope with a 2x telecentric.

The first image is with no flat applied, linear stretch, and slight sharpening in IMPPG.

The second is with a flat frame applied and the same processing settings as the first.

Forth is a typical flat frame from the Quark Combo. I have no Quark images from today. 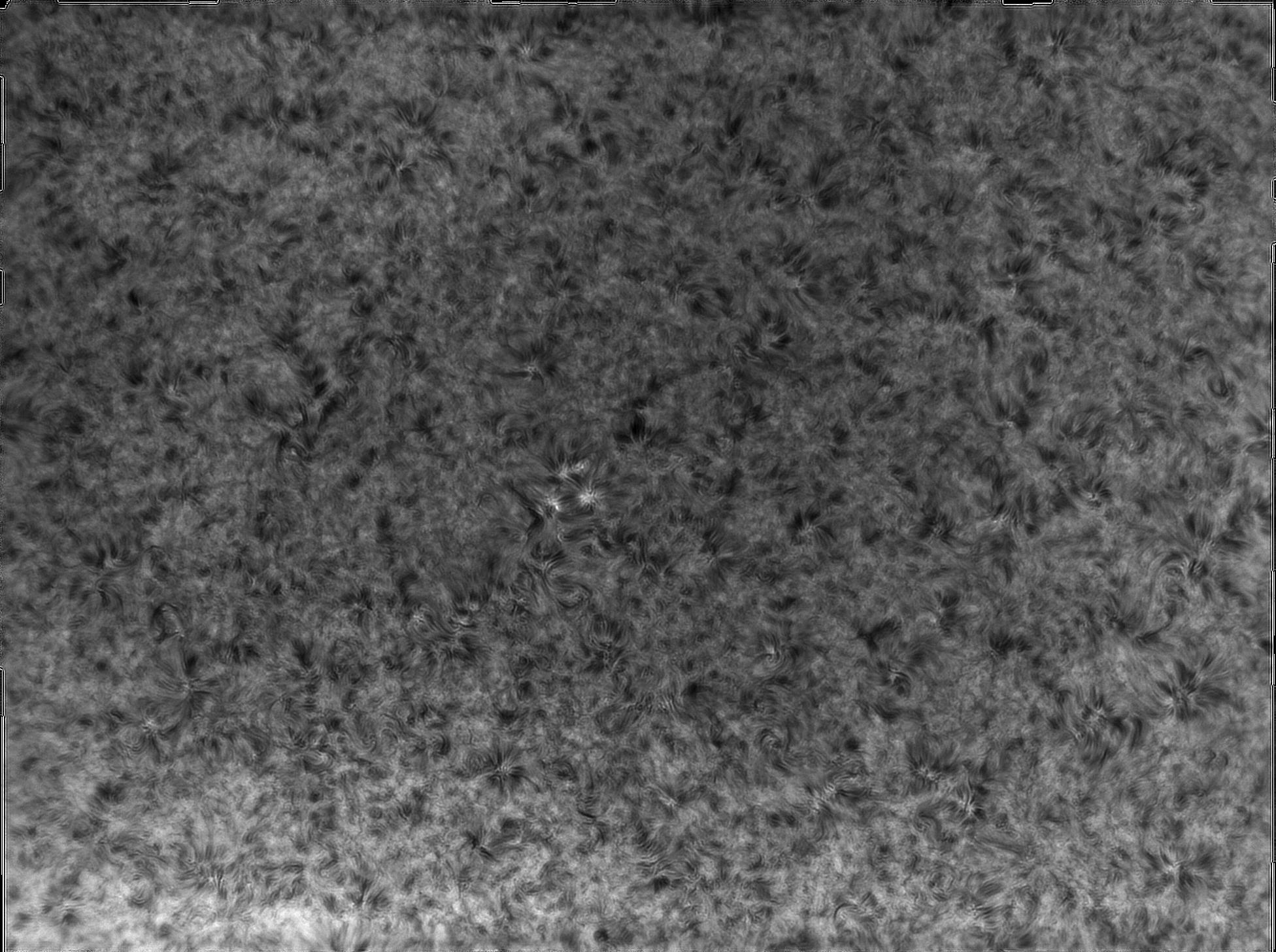 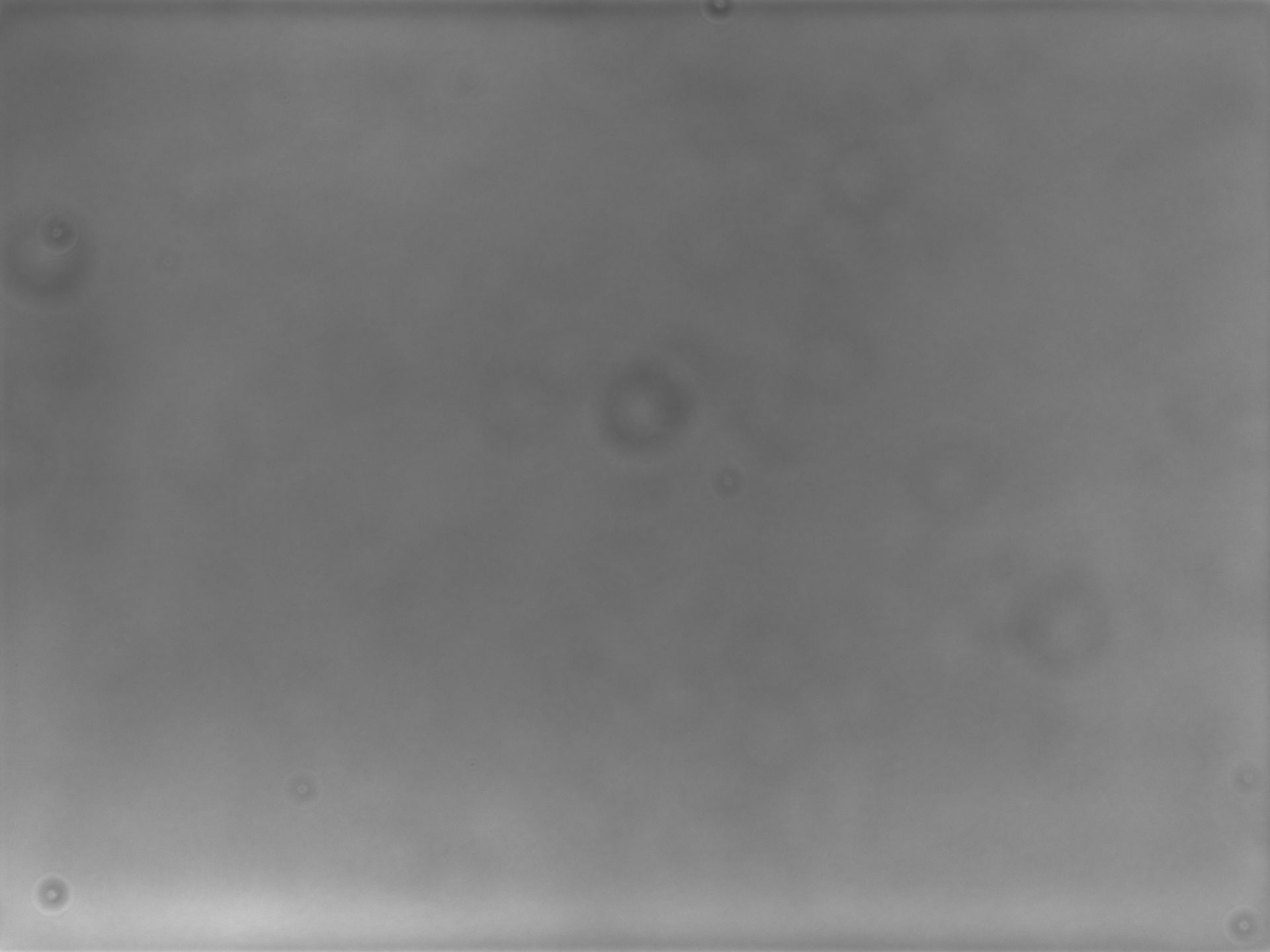 Todays Prom with the return of the Double Limb 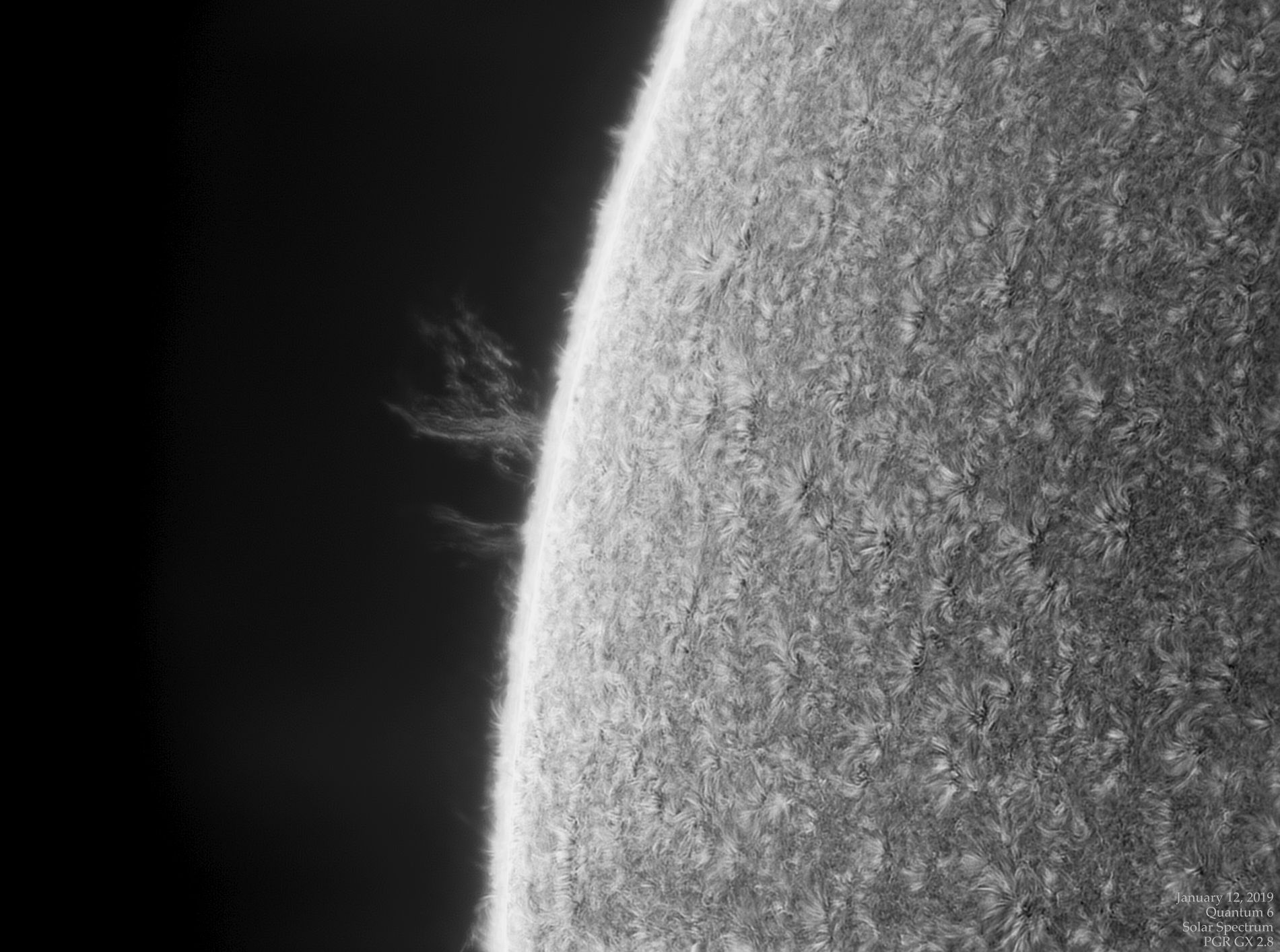 Thanks for additions, Phil.

When you will have enough sunshine, you can do more extended test:

1. Point your telescope at the center of the sun disk
2. take flats for all positions of the Quark tuning knob.
3. the same for SS etalon with 0.1A steps on both sides from center of Ha.

This will give you the info how uniform your etalons in CWL position.
It is important that non-uniformity change equally with CWL regulator position change in both directions blue and red from the CWL.

The FF for Quark shows typical for Quarks FF.


BTW. Do you see signs of etalons nonuniformity when you observe visually? In both SS and Quark?