Clear skies here in Southern Ontario this weekend thanks to a high pressure system, and with the clear skies comes cold too

Not crazy cold, but it yesterdays solar session started off around -12C and it had crept up to -8C by the time noon rolled around and I finished up and came in for lunch. Still very little snow on the ground...below is a quick pic taken around the observatories with my phone:

A quick view over the wall of the dome shows the scopes in use. The top scope on the side by side mount is the iStar (150mm, f8), the bottom is the Celestron CR-150 modded with a Lunt DSII etalon, and mounted int he centre is the Stellarvue (110mm, f7) and the double stacked Lunt LS80T/LS75FHa piggybacked on the Stellarvue: Winter seeing is usually far form ideal, but these cold days with no snow cover aggravate the instability making it far worse. I set the SSM up and the typical readings ran between 3-5 early in the session when this pic was taken...it didn't get any better 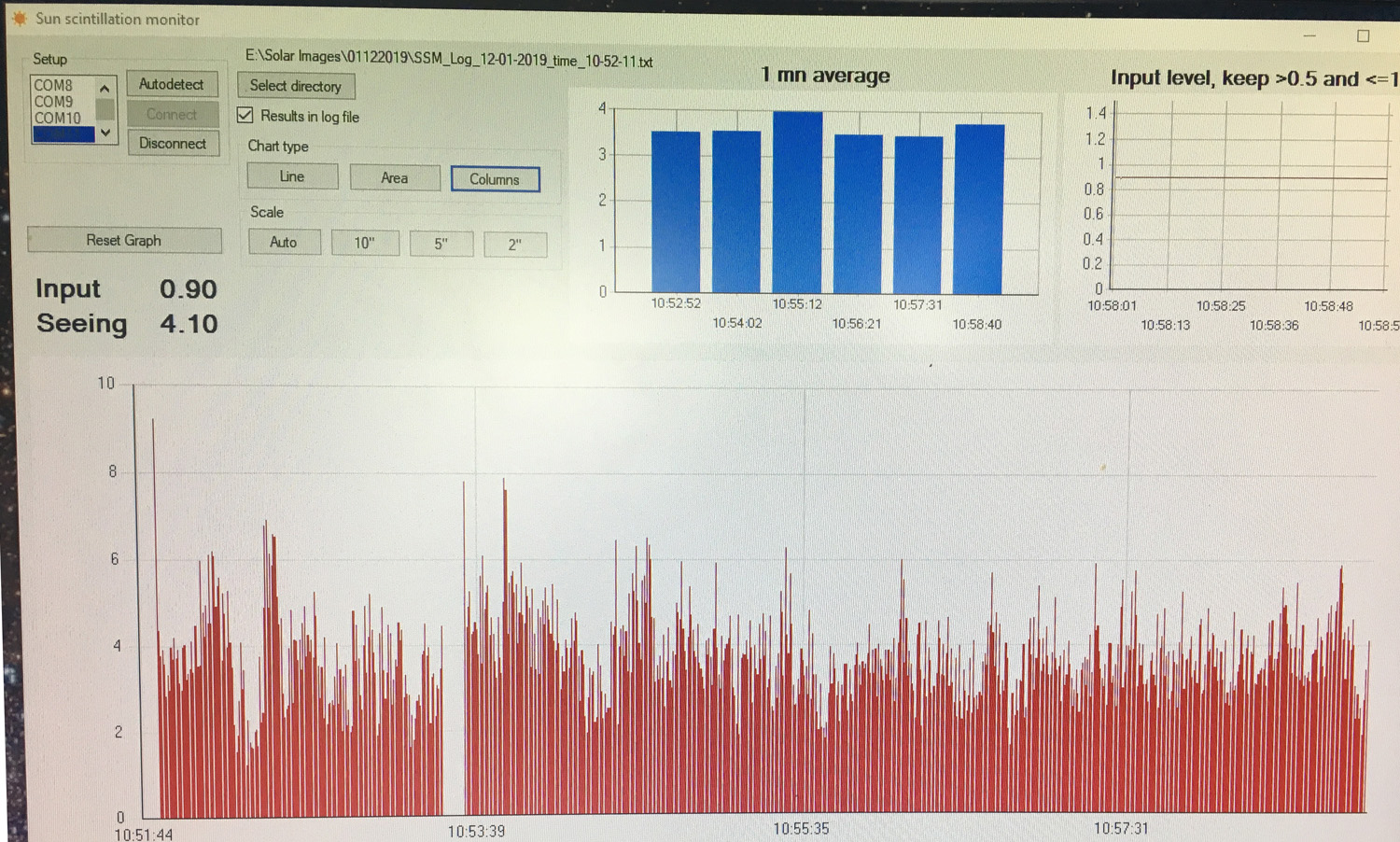 On to the images...
As usual I ran the full disk Ha set first making the composite below from separate disk and limb exposures, with the limb frame inverted to highlight the proms: 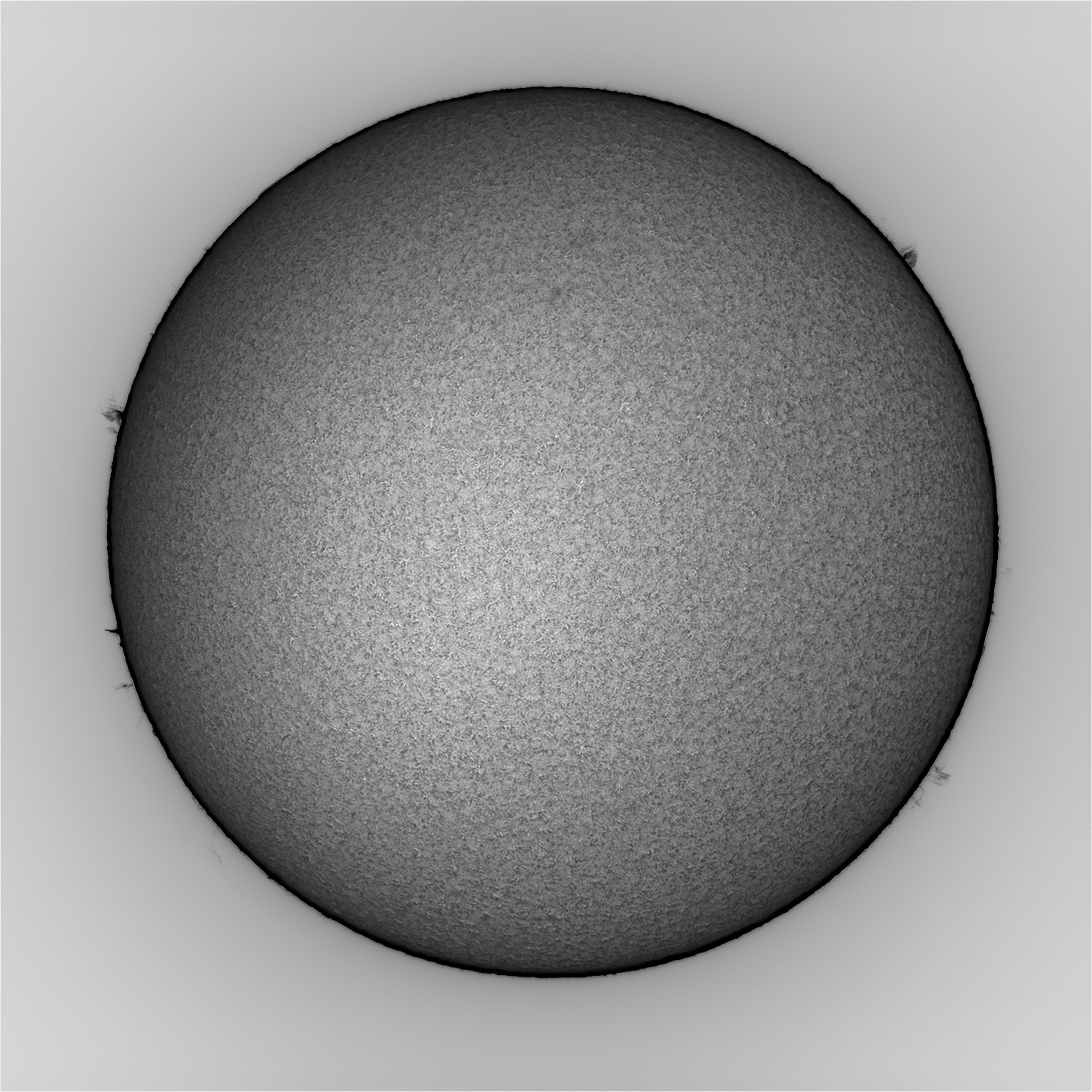 The amount of disk activity was very low, though there were a few regions that looked to have some activity so these were imaged with the modded CR150 with a 3x tele-extender ahead of the camera. A few small knots in the chromosphere and a small filament were all that showed: 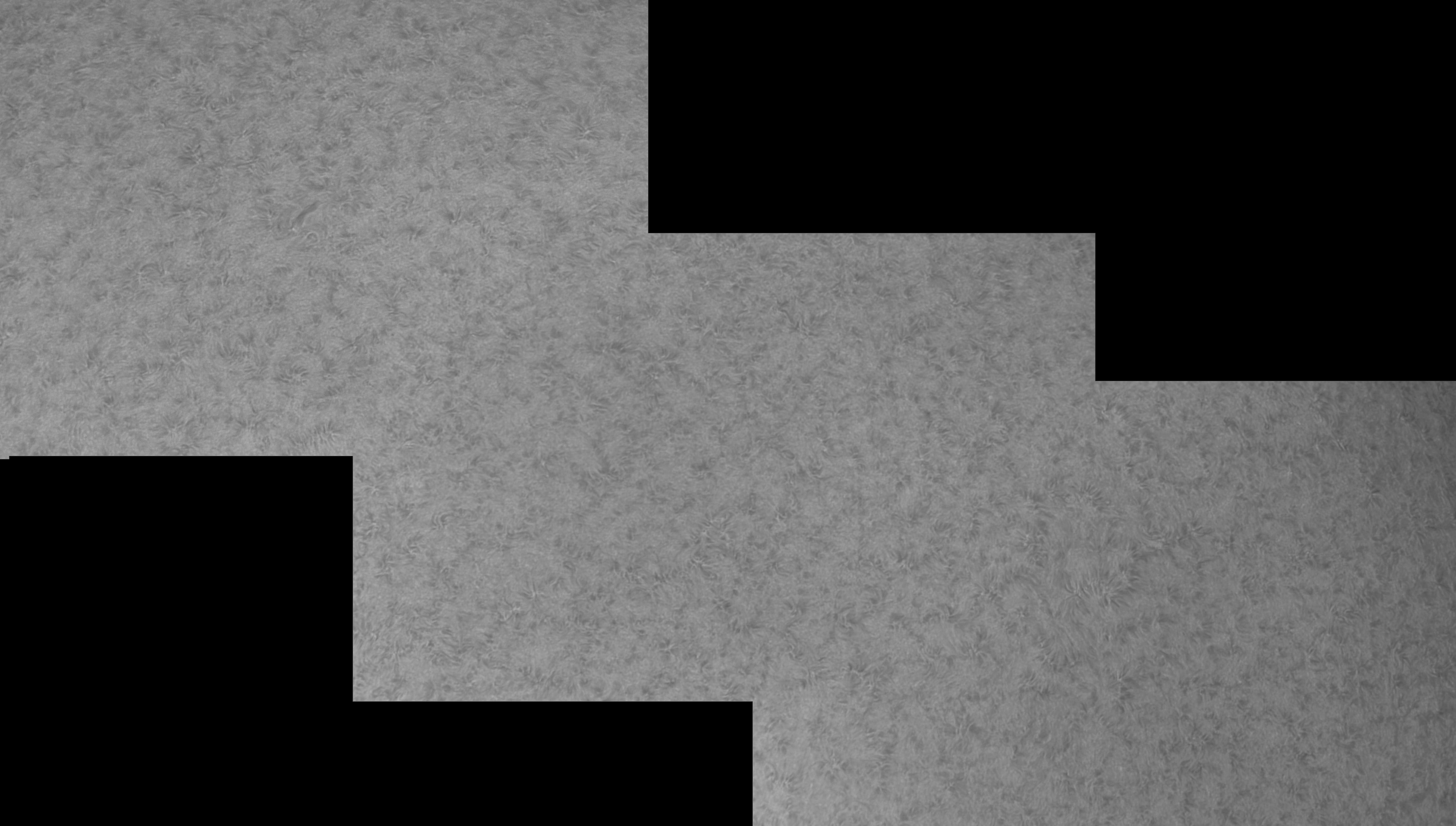 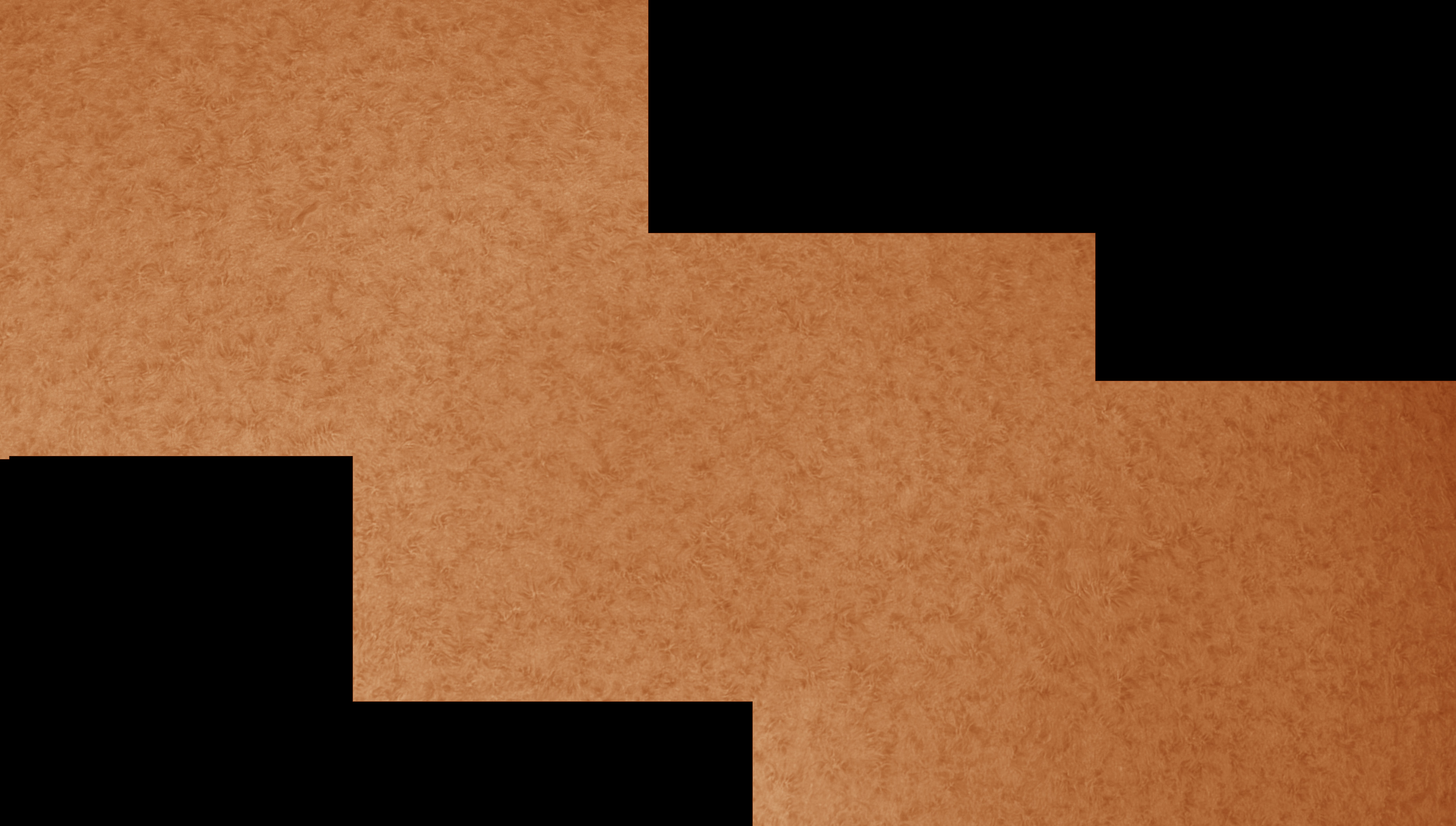 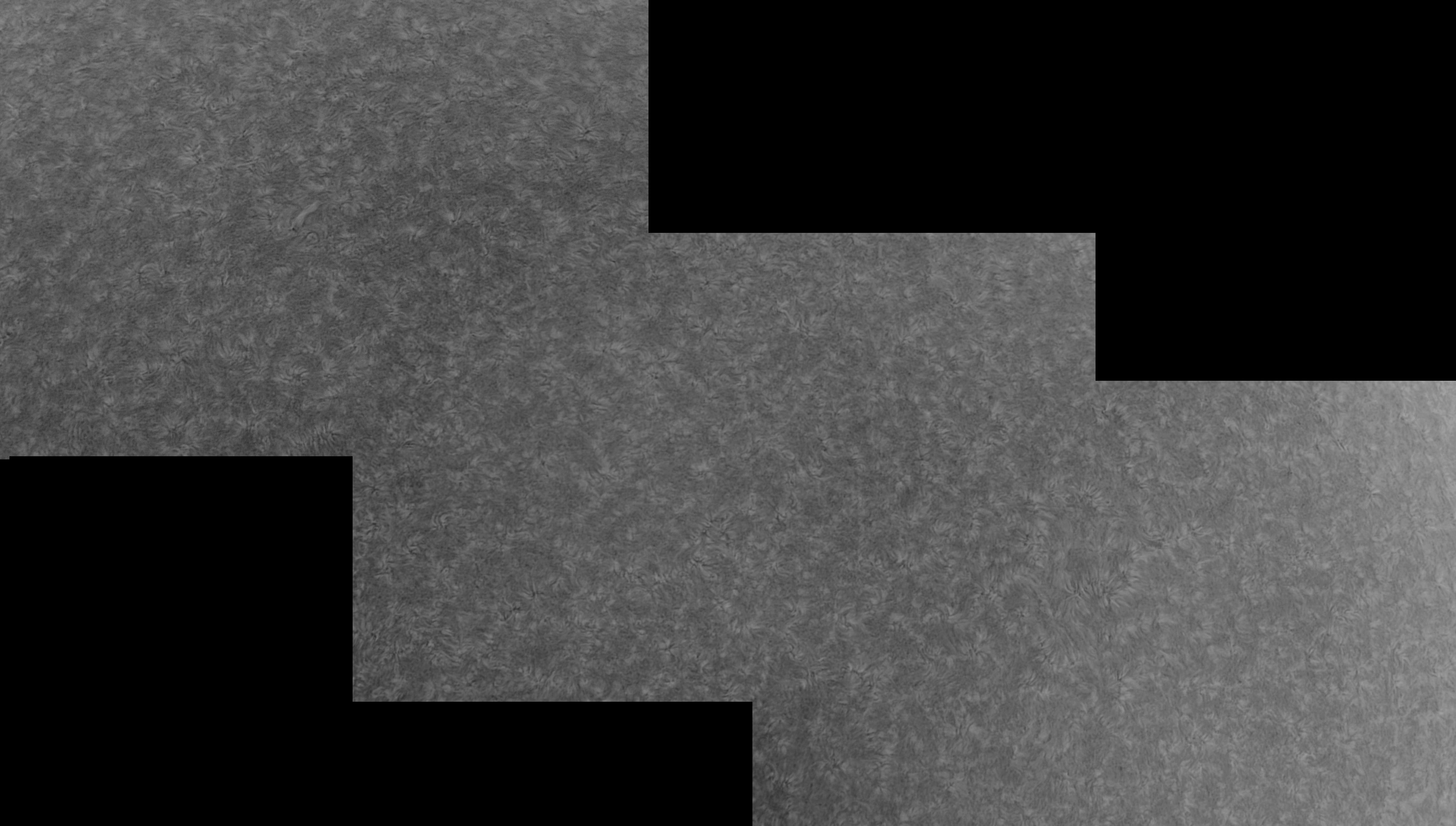 I tried to capture the proms but the poor seeing did not support the long exposures needed so nothing worth posting came out of them!

My ASI1600MM camera has given me problems in the cold with vertical bands appearing on the display and in the captured files, but I did some testing over the holidays and found it might be worth trying to add a bit of heat to the camera enclosure and remove the banding. I rigged up a way to attach one of the eyepiece dew heater bands to the back of the body and if I run the power setting on high it seems to keep the banding at bay. I need to refine this a bot more, but it may keep the camera functioning in the cold.

I used the ASI1600MM to image in WL and CaK through the iStar OTA using the Lunt WL wedge/Baader Continuum filter and modded Lunt solar wedge/B1800CaK/Baader K-Line filter set. Focus was difficult to find with the poor seeing and limited features with diverse contrast on the disk to help figure the best position of the focuser. The resulting images are posted below: 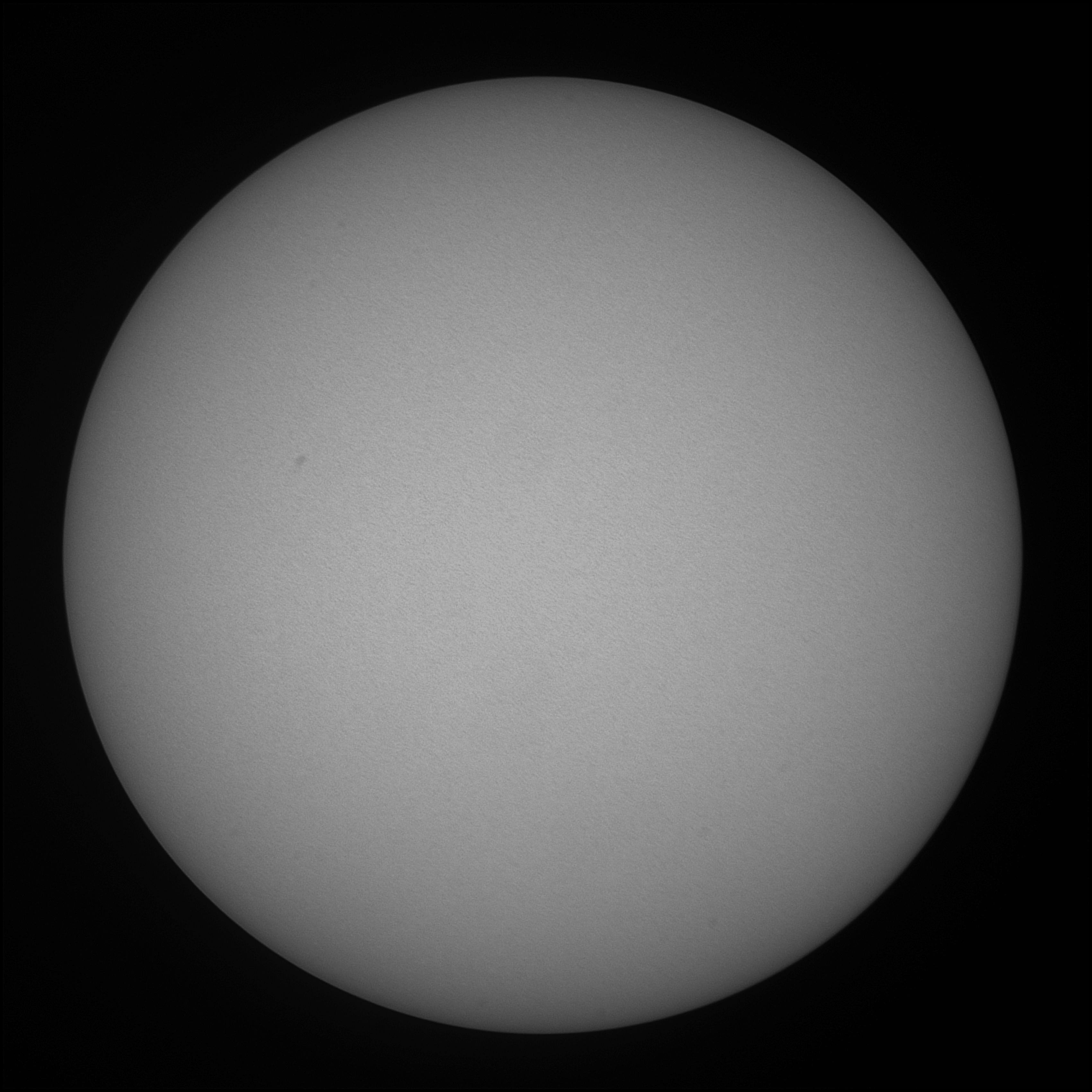 There is a diffuse spot in these images (about 1/2 way in form the eastern limb), and as much as it would be nice to have it solar related it's just a dust bunny...need to clean the camera

This covers the results of Saturday's session.

Nice images Brian, glad you got some sun! I always like seeing pictures of your place. Your setup in the obs is great too!

Thanks for your comments and feedback on the images, scopes and scenery...always appreciated

Hi Brian: very nice images and great set-up you have. Not only you have excellent instruments, you also have a full 360 degree view of the sky. The sun is probably never in the trees at your observatory...lovely

Thanks for your comments Maurtis, always appreciated !!!

Thanks Eric, your comments are always very much appreciated

I must be crazy, LOL. No warm room in the solar observatory!

So far this winter has not been nearly as cold, currently about -15C and I'm going out soon for some deep sky work. I shouldn't have to spend too much time in the cold, once the camera is focused I can go into he warm room and have a coffee. Mind you the warm room is still about 12C, but better than the air temp.

I was thinking that little solar dome would offer you a nice cosy refuge from chilling winds. I would guess it would be unbearable to sit out in a wind at that temperature. I know that I get frozen to the bone sat out in my garden solar imaging in spring. I also find it next to impossible to do night time observing even with heated shoes and I look like the Michelin man. I guess I am not cold hardy

Great equipment setup. I really like the dome. It reminded me of the time I lived in Mississauga as a kid and built a large igloo in the front yard. It lasted until April that year. Thanks for the memories.

Thanks for your comments...always appreciated

Phil, the POD domes do have the 'igloo' look...where are you located now?

I’d love an observatory, but I have too many obstacles in the way. I have to chase the Sun from the front to the back garden around the house and between the trees as the days and season progresses.

Thanks for the comments, and I know the cold isn't for everyone (not for many around here either

I have to say I don't mind the cold...it is what I expect to have here in the winter but I wouldn't mind some snow to go with the cold.

Phil, Florida certainly is an improvement as far as temperatures go and improved seeing once you get away from the jet stream!!!