We got lucky weather-wise with the 2019 total solar eclipse. It was clear skies all across the South American eclipse path, other than the extreme conditions in the Andes. We viewed from the coast in La Serena, Chile. It was a great event. Many pearly white coronal streamers, a black Moon, and a very dark blue sky. In binoculars and a telescope, there was a nice moderate-sized prominence. The corona was flattened as is typical during a minimum.

I got the time-lapse of the view about 120 feet up from the beach. Here it is on YouTube. (It's a little frustrating because as a time-lapse it plays so fast. You may need to pause and unpause it.)

You see the darkness rising up from the horizon on both sides (just like we caught in Wyoming in 2017), the Sun's reflection in the water disappearing as the shadow comes toward you, the Sun becoming eclipsed, and Venus appearing in the lower left.

What is fascinating to me is the color of the prominences, since I spend so much time watching them in H-alpha. In a Quark before the eclipse, I saw that prominence as very faint. During the eclipse it was electric pink.

In 2017, there was a big prominence. Most of it was the same color, more or less an electric pink. But there was a region in the middle that appeared more orange. I assume that was a more energetic region. In 1998, I described the prominences as red-pink-yellow, but I am not sure what I meant. I am not sure if the 2017 orange color was a perceptual effect or a true color (just like bright flares sometimes falsely appear yellowish in monochromatic H-alpha).

Also, I was interested in seeing the solar reflection disappearing coming towards us as the shadow came over. The video shows the distant reflection disappearing first. I wish I had a video of the end of the eclipse to see if the reflections reappeared from a distance. I am unlikely to ever see a solar eclipse from 120 feet over an ocean again, so perhaps someone will post one for this eclipse on YouTube.

Thanks for your detailed report + timelapse, George!

Reading it I feel myself like I were there.

That's stunning! We're viewing the 2026 eclipse in Iceland (that is the plan!), and seeing your video of the shadow approaching over the water is giving me some ideas for location. Thanks for sharing George!

Congratulations on being able to travel to the eclipse, and capture a great video of the event. Thanks for sharing

Thanks, all. That was done by my daughter simply holding her iPhone in front of her while she watched the eclipse. I didn't realize how interesting such a video would be. Here is the shot I got from my DSLR. Auto focus and auto exposure but set for +3 stops ahead of time. I picked it up, snapped, and forced myself to put it down without tweaking so that I didn't miss the eclipse. I figured I could see much better photos on the Internet later on. This just proves we were there. Actually, the upper right and lower left parts of the corona were predominant, and the upper left and lower right were a series of streamers. 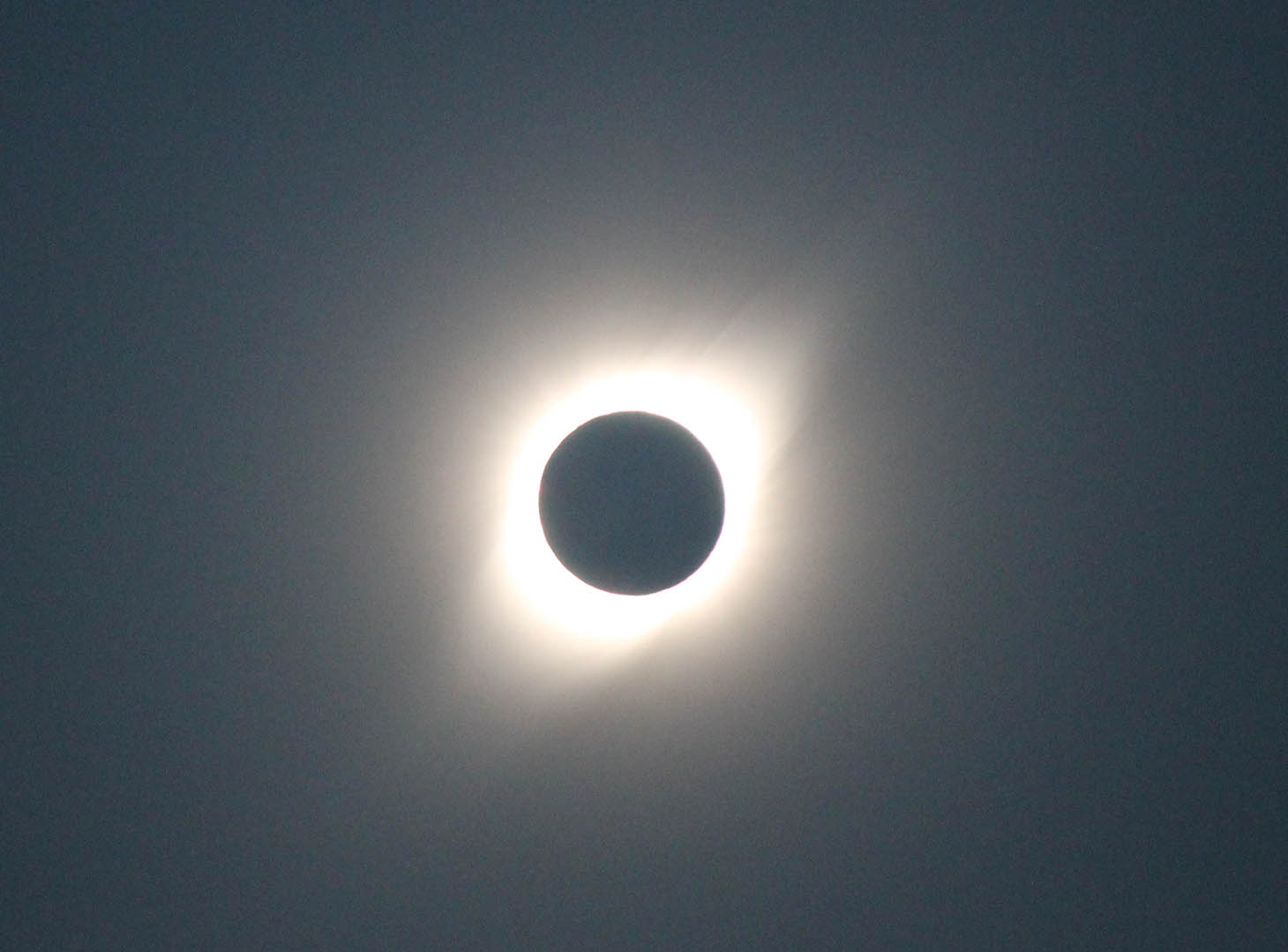 Thank you for the report, video and image

how wonderful to be there and thanks for the views. It brings back memories of 2017. I also remember the prominences like sparkling ruby jewels which photographs do no justice to. I think they were a very rich red pink too.

Nicely done, George. Something you’ll remember for years to come! Quite an experience.....like nothing else.