This past weekend offered clear skies despite the early start to winter, and with some new activity on the disk I managed to get out both Saturday and Sunday to do some imaging. I am admittedly a bit out of cold tolerance since both days were around -6C when I went out, the SE wind kept a cold draft blowing through the observatory and making me cold. I guess I better get hardened off, since the long term forecast is for a colder winter with above average snow for Central Ontario...the observing temps might soon be -16C or -26C

The Saturday session was limited to imaging through he LS80T/DSII/B1200Ha solar scope with a few full disk images and a couple with the 3x barlow to boost the resolution. A full disk composite is shown below, assembled from separate disk and limb exposures. In addition to the developing active region there was also a nice prom on the SE limb: 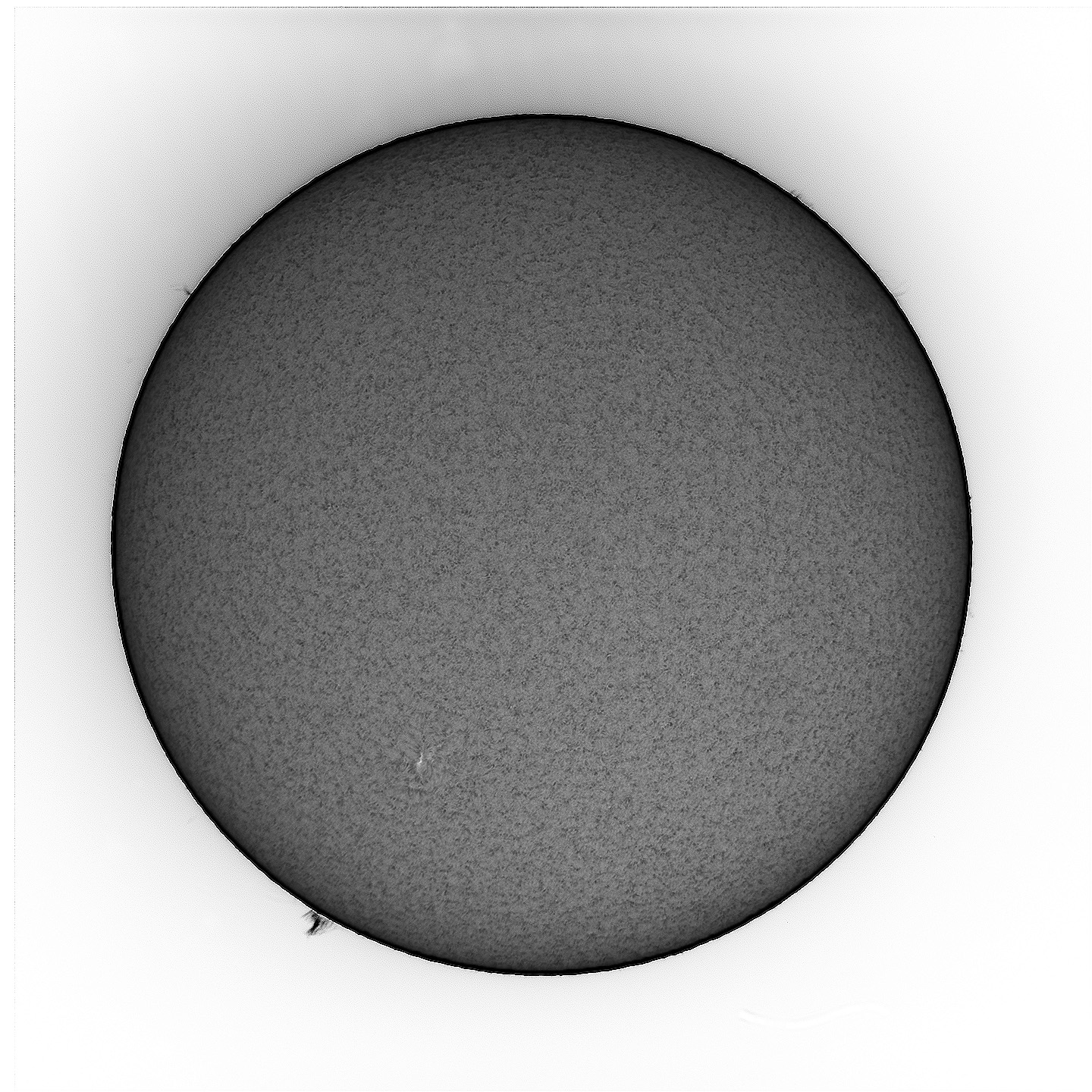 The images below were taken with the 3x tele-extender: 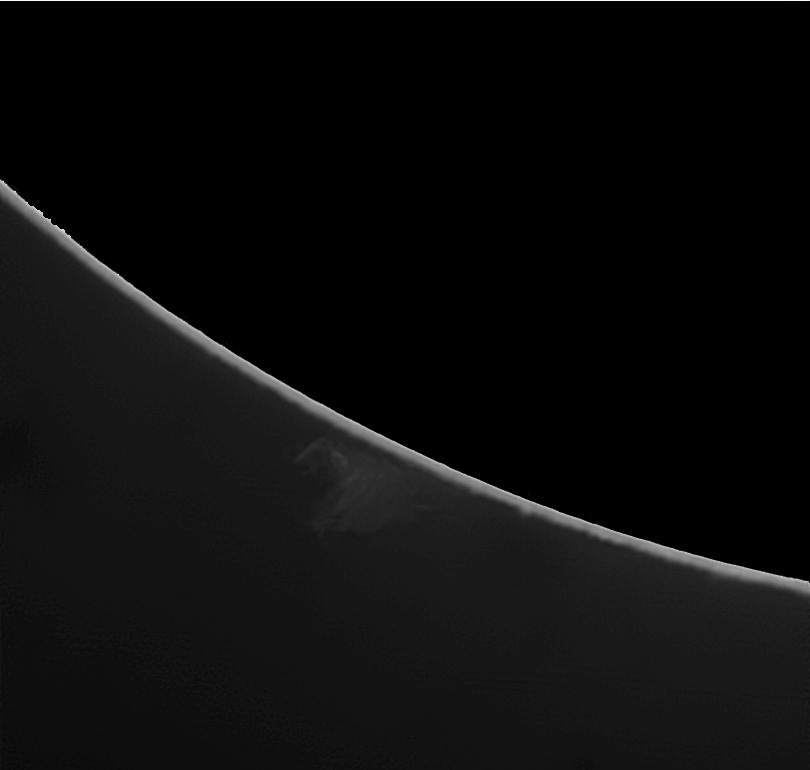 Sunday started off much like the previous day, but thin clouds slowly built in as the morning waned. I started off imaging with the LS80T/LS75FHa/B1200 double stack to grab the full disk composite below: 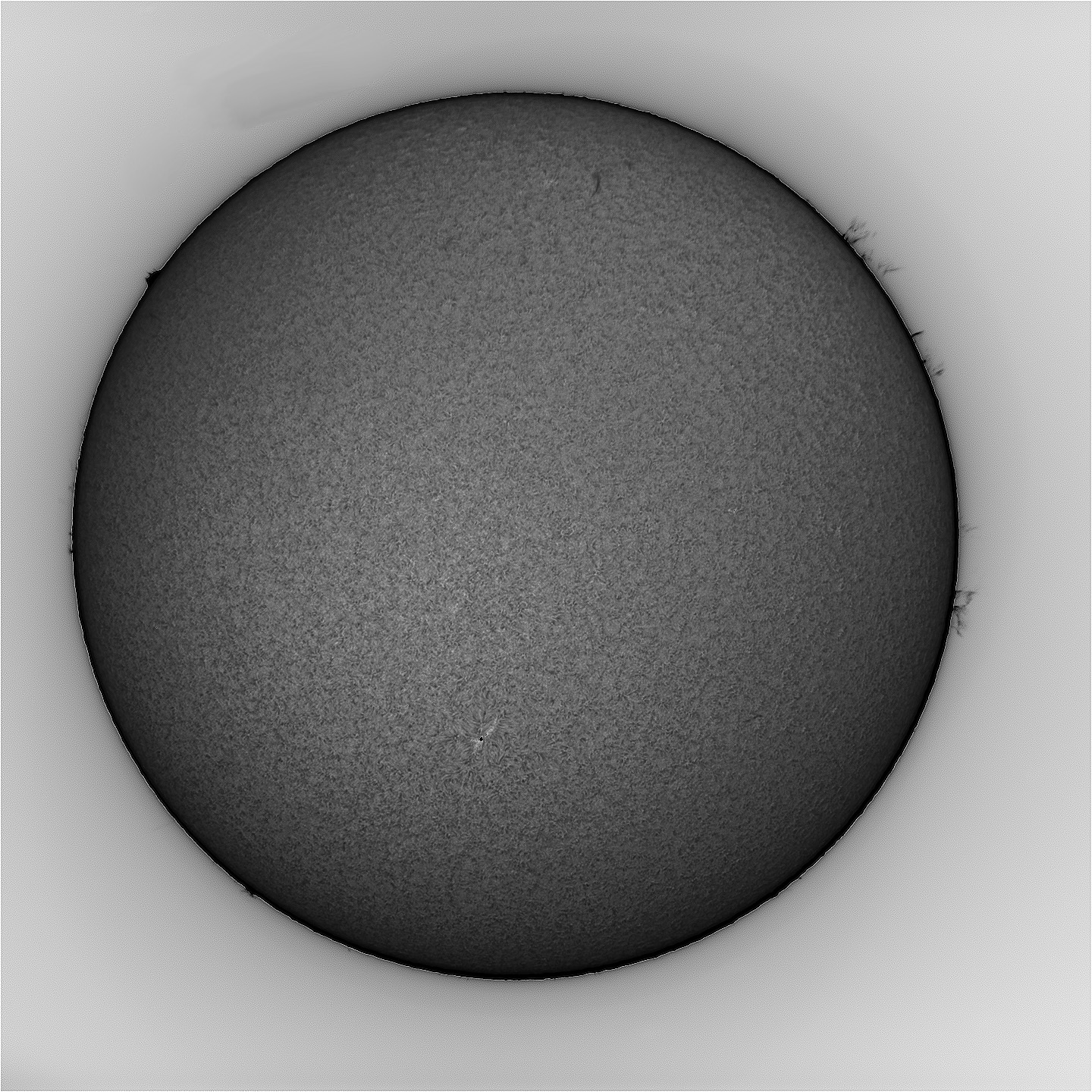 I decided to set up the modded scope (CR-150/DSII/B1800Ha + 3x tele-extender) to get what I hoped were higher resolution images of the AR and faint proms on the western limb. The first image below is of the active region, followed by another small spot of activity The north polar region of the disk had a number of small filaments and brigh spots, shown below in this 3 frame composite. It isn't pretty, since I couldn't get the one frame edge to blend very well!

Clouds ruined the attempts to get the proms, shutting down the session just before local noon.

The image below is a panorama of yard with the observatories and surrounding fields...you can see the cloud that the sun had settled in by the time I finished. The centre of the frame is facign south:

That is all from the weekend...hope to have more sun again this coming weekend. Questions and comments are always welcome!

Do you find any variance in the performance of your blocking filters at such low temperatures?

A super set of images Brian, I like the little hot spot near the north pole

looks like you are near the north pole too

I don't think I could sit outside at -6 let alone -26. Your last image is interesting as most people would say that was a glorious day, just not a glorious solar imaging day, there is a big difference which most folk don't understand

Beautiful images with very good detail, Brian. The fact that you are out there imaging at such low temperatures shows how passionate you are about solar !

My thanks to each of you for your comments and feedback on the images...always very much appreciated

Dedication or addiction, either way nicely detailed images. You even made the full disk images appear cold.
I do like the pano. At first glance, this Florida guy thought it was a nice white sand beach.

Thanks for the feedback, and I chuckled at the "white sand beach" too.

The temps rose overnight with rain and most of the snow is gone now, but still cool to be outside working or playing.