Spectroheliograph built with foam board and a hot glue gun

I LOVE finding out about different ways to appreciate the Sun and light in general. Use this forum to post your info or questions about various outside the mainstream ways to appreciate our life giving star!
Post Reply
6 posts • Page 1 of 1

Spectroheliograph built with foam board and a hot glue gun

After completing the PST mod using black foam board and a hot glue gun (see viewtopic.php?f=9&t=32108, I decided my arts and crafts skills were ready to take on building a spectroheliograph (SHG). This project was inspired by the SolEx (Solar Explorer) http://www.astrosurf.com/solex/sol-ex-p ... on-en.html

I had a lot of spectroscopy and optical parts lying around and the SolEx concept I found very appealing because of its compact form and light weight. The SolEx is built from 3D printed PETG. I figured I could build something similar from black foamboard, hot glue and rubber bands. One of weaknesses of PETG is that it apparently gets soft if not shielded from the Sun's rays. Also, the most difficult part of the SolEx design is the necessity to put screws into plastic. Foam board is superior in these aspects and has, I believe, a high strength to weight ratio. I could build the whole structure in a single evening at very minimal material cost. For my first attempt, I decided to only use components which I already had around the house: a 100mm f4 lens with M42 mount (for the collimator lens); a 100mm f4 lens with T-mount (for the camera lens); a 1800 line/mm 50mmx50mm holographic reflection grating from Thorlabs; a ZWO ASI 178MM camera. I also had a spectroscopic slit from Paton Hawksley made from a 10mm stainless steel disk, with a slit length of 5.0mm and width of 50 microns. Ideally the slit should be narrower, but for a first attempt, I went with what I had at hand.

The photo above shows the two lenses secured in the foam board structure, along with the diffraction grating and ZWO camera. The 5mm thick black foam board was double thickness in some parts and triple thickness in others. The bottom is a single 5mm black layer attached to a 10mm thick white layer (the outside being white is to better reflect heat). The structure is very rigid and also quite light. The total weight, including the grating holder, camera and all the adapter fittings, is only 1.15 kg.

The stainless steel slit is attached with double sided tape to a disk of black foam board (in which there is a small hole) and pressed into an M42 spacer ring. This ring is positioned at the focal point of the collimator lens. The camera lens is adjusted with a T2 spacer to focus to infinity. The fact that the lenses have built-in helical focusers is very helpful since over the wavelength range used in a SHG, refocusing is required. 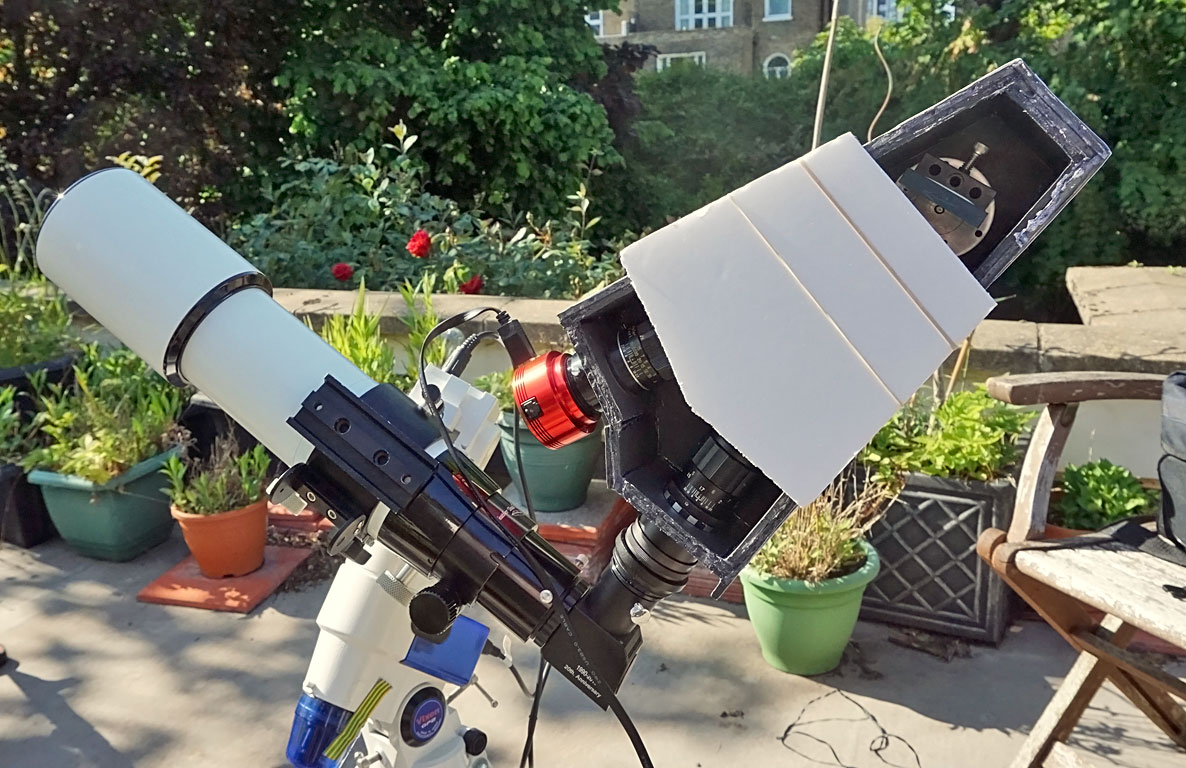 The above photo shows the SHG attached to a 80mm f6 APO refactor. The 480mm focal length gives an image of the Sun with a diameter of around 4.4mm, which matches the 5mm slit length very nicely. Following the suggestion on the SolEx website, I used a Herschel wedge to reduce the intensity of the light arriving at the slit. As Christian Buil points out, there is a polarisation effect whereby more light would be transmitted through the SHG if it were rotated 90 degrees from the position shown in this photo. However, I found with the 50 micron slit, it was actually better to position it this way to reduce the energy as much as possible. This orientation is also mechanically more stable.

It turns out, once the sun was focused properly on the slit, I could leave the top segment of the cover off (as shown in the photo) since the stray light was not significant enough to disturb the measurement. I could therefore tune the wavelength by reaching in and rotating the grating by hand, using the one inch 1/4-20 bolt attached to the back of the grating holder. Another one inch 1/4-20 bolt passes through the bottom foam board platform and the grating rotates around this bolt. More recently, I replaced the rubber bands with Velcro pads to secure the lid.

It is also worth mentioning that it is important to make sure that all the equipment is correctly oriented perpendicular to the RA axis and that there is good balance so that the whole SHG contraption does not flip over. I found the weakest mechanical link was the Lunt Herschel wedge as its 1.25 inch adapters could unscrew with only moderate torque.

On this first attempt, I took videos of 3096x200 pixels at a speed of 152 fps. I used the ASI Studio program called ASICap, which is actually fairly good, and captured 8bit AVI files. It turns out that FireCapture 2.7 and SER files are a better choice.

I was using my small Vixen GP2 mount and the only slew rates available were 2x and 32x. I decided to go with 32x, which meant that the slit would scan over the Sun's diameter in 120/32 = 3.75 sec. At 152 fps, this would give 570 frames, which is not a particular high spatial resolution. But recall that with a 50 micron slit and the Sun's diameter of 4.4mm, the spatial resolution is anyway not going to be very great.

Given the particular orientation of the slit and grating I chose, the natural scanning direction is in DEC rather than RA. Since the scanning speed was chosen to be very high (32x), this proved to be acceptable. It turns out that due to poor polar alignment and the fact that the GP2 mount only tracks in sidereal, there was too much drift to even do scanning at 2x. Using my already polar aligned HEQ5 would be a better choice but it was being used with another telescope at the time. The above image is a "first light" imaging attempt on the CaK line. This line is quite broad so is an easier spectral line to attempt when first learning to use a new SHG. The software processing route was first to use VirtualDub to edit the AVI file, then use the Wah! program SLiM. I chose a spectral width of 8 pixels. I then used PhotoShop Elements to correct the geometric distortion (since the Sun's image was about 2000x600 pixels), and correct brightness and contrast. The advantage of using a wide slit is that there are relatively few defects caused by slit imperfections. No attempt has been made to remove defects or improve the resolution with convolution. 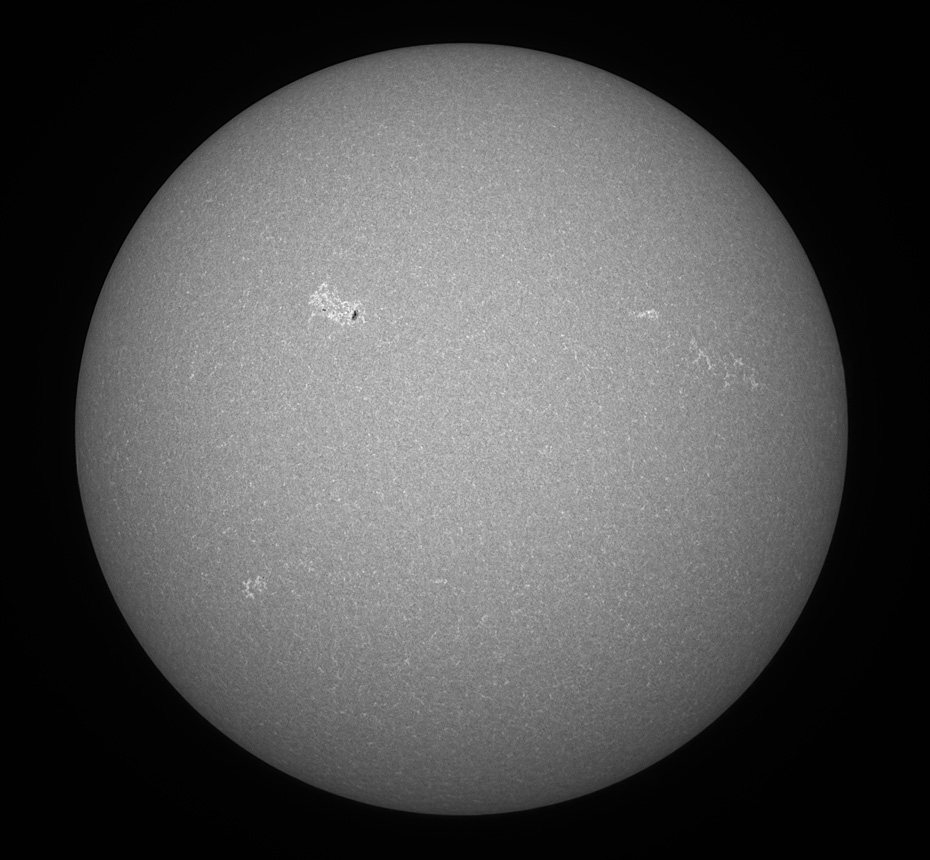 For comparison, here is an image taken with my Coronado CaK PST (a lovely little telescope that really deserves to be used more often, rather than sitting on the shelf) using the same ASI 178MM. This SHG is still in the development stage, with lots of room for improvement, but I think this foam board contraption shows some promise.
Last edited by thesmiths on Sat Jun 05, 2021 2:39 am, edited 1 time in total.

The video below shows the raw avi video file of the CaK line being scanned four times across the Sun's surface at 32x sidereal rate. Each scan across the Sun's diameter takes 3.75 sec. The variations in intensity indicate the presence of structures such as sunspots. The thumbnail for the video shows the data from one of the four scans extracted into a 2000x600 pixel stretched image of the Sun. The scan direction is up-down (which is why the image is not as tall as it is wide -- the scan speed is actually too high for the fps used).

Below is one of the four scans slowed down from 152 fps to 25 fps. This makes the intensity variations within the spectral line more clearly visible. The thumbnail for the video shows a frame from the scan which cross a sunspot, I think the one on the right side of the thumbnail of the previous video.

That’s a very nice result, Douglas.
I would have never guessed foam board to be a workable material but your design looks very solid.
Cheers.
Peter

Well done!! this is fantastic, and the image too

and thank you for the scan video, I have never seen this done before and gives me an insight into how you take these images. Very clever indeed!