Hello,
Here is an announcement for a pro-am observation campaign initiated by Miho Janvier (Spatial Institute of Astrophysics/France) due to start in October, 16.
The announcement was made by Christian Buil (well-known French amateur, conceptor of Sol'Ex SHG between many other achievements) originally in French here :

More details will be provided later.

Here is an English translation of this very exciting announcement. Get ready !!

I am writing this message to inform you about an international solar observation campaign officially starting on October 16 of this year, over a period of 14 days from that date.

It is about studying the surface of the Sun by various terrestrial means in coordination with the space mission Solar Orbiter. This satellite, at that time, will have a vision of the opposite side of the Sun from that seen from Earth. Solar Orbiter will be able to give alerts on the activity in advance of what will be observed from the ground. The observation techniques will be multiple during this campaign and will involve the largest solar observatories in the world such as Inouye (Hawaii) or Themis (Canary Islands).

The contribution of amateurs is solicited for this campaign through an initiative of Miho Janvier, assistant astronomer at the Institute of Space Astrophysics (Orsay), and that some of you already know. I have been in contact with Miho for some time on this operation - see the screenshot of the video made yesterday September 8 to better finalize the scope of the amateurs' contribution.

Amateur observations can be a very useful stone for this global campaign. It is precisely, during the period, to make images of the solar surface in the H-alpha line with a good contrast. It will be in particular studied the spirality in the active centers and the protuberances at the limb. The usual means can be used, of course those allowing to acquire images of the disk through narrow interference filters, but also those based on an instrument like Sol'Ex, which guarantees a good contrast and a satisfactory level of details.

The images can be both those of the whole disk, for context analysis, but also details obtained with more angularly resolving equipment. One of the keys for amateurs is the most continuous follow-up possible. The month of October is not very favorable in terms of weather, but we count on the geographical distribution of observers in France, but also elsewhere, to have the best possible temporal coverage.

This operation is an exceptional opportunity to participate in a prestigious pro-am collaboration, maybe a first at this level in the solar observation. Other campaigns will take place next year, but it is necessary to be present from the one of October!

You have understood that in this framework a minimum of rigor is necessary to facilitate the work of the researchers. Please note that the possibility of having access to the MEDOC database of the IAS to post the data is being studied. In case of difficulties, we will have to find alternative solutions, as Didier Favre did (but time is going to run out). However, the volumes are really likely to be very large in terms of archiving, so be careful. In any case, you'll have to archive your data carefully on your own hard disk for possible future analysis.

As time is short, I am already providing you with some details, to feed exchanges, requests for clarifications, etc.

JPEG, PNG, TIFF image formats will be accepted, but ideally you should double up with data in the FITS format. There is a problem with the data information. In FITS, the date at least and the name of the observer in the header (we will detail if necessary). In a computer graphics format (JPEG, PNG...) it is more delicate. Here is what is agreed in the protocol. The image files must be named as follows:

The '_' at the beginning is a good habit in stellar spectrography. It indicates several things, in particular that it is a processed and formatted data, good for a scientific exploitation. It also allows to better find one's way in these archives.

CB' is a parameter, a priori on two letters, which identifies you as an observer (there may be an extension for the operating mode). A priori it is the initials of your name, but not necessarily (you may have to manage conflicts).

Then comes the date in UT (mandatory), in the format: YYYYMMDD_FFF

In the example the observation was made on September 10.541 2022 Universal Time, by CB.

The other constraint will be the orientation of the images. It is highly recommended that the orientation of the north-south axis be specified in the images, especially those where the disk is seen in envy, either by a small symbol, a small planisphere, ... The axis does not have to be oriented vertically (north up), but if you can do it, it's good. Here there is a helping hand to take. Some of you already know how to do it, others don't. I ask those who know how to do it to write their method quickly, for example from WinJupos software, and if possible in the form of a web page, a blog, etc. This is a great service and the thing is important, because it is necessary to train in advance of the phase (one should not hesitate to follow this protocol now for the observations of the moment to make tests and communicate around it). Generally speaking, everything will not be perfect, no worries, we can also consider this October operation as a run-in.

Other messages will follow of course. I suggest you to spread this one already, including abroad if you have the opportunity.

Everybody can participate in this exceptional operation, even if your telescope has a diameter of only 50 mm. A great opportunity for Sol'Ex users. I don't know about you, but I think it's great!

WoW, Christian, keep us updated on this. It will be an excellent opportunity for professional and amateur cooperation. Thanks for representing the amateur solar community on this.

Very interesting, Christian. Thank you for sharing. I hope we have some good weather over the observation period.

I assume the final image can be a stacked image, but are we allowed to apply deconvolution/sharpening and tweak the contrast using histogram or similar functions? As you know, our final images are usually highly modified versions of our starting images which will likely degrade their scientific value. What are the rules/guidelines here?

Stu,
In addition to their adaptive optic systems professionals use lucky imaging stacking too. I don’t see why they would disallow it since it shows features more clearly than otherwise would be seen at long as the imager does not deviate from accuracy and get too “ artsy “ with the finished image. Hopefully Christian will have an answer though.

Hi,
Stu, I forwarded your question to Christian Buil. Let's see what they say.

DeepSolar64 wrote: ↑Fri Sep 09, 2022 7:38 pm Stu,
In addition to their adaptive optic systems professionals use lucky imaging stacking too. I don’t see why they would disallow it since it shows features more clearly than otherwise would be seen at long as the imager does not deviate from accuracy and get too “ artsy “ with the finished image. Hopefully Christian will have an answer though.

Hi James,
It’s not so much about stacking, but all the further tweaking that we generally do

DeepSolar64 wrote: ↑Fri Sep 09, 2022 7:38 pm Stu,
In addition to their adaptive optic systems professionals use lucky imaging stacking too. I don’t see why they would disallow it since it shows features more clearly than otherwise would be seen at long as the imager does not deviate from accuracy and get too “ artsy “ with the finished image. Hopefully Christian will have an answer though.

Hi James,
It’s not so much about stacking, but all the further tweaking that we generally do


Yeah, I agree. They would probably feel that it would detract from the accuracy of the image.

Here is the news :

Things are becoming more concrete. Some work has been done since the first announcement of this pro/am collaboration in the context of a large observing campaign gathering the most important solar observatories, and also satellite observation.

A web page has been opened at IAS written by Miho Janvier, which explains in a detailed way the interest of the amateur contribution, the why, and how to do :

It is necessary to measure here the rather unique opportunity offered to solar observers to join such a consortium and the importance of the gesture. Everything will start on October 8th, but you can start now to register and even upload your jpeg, PNG, FITS… images to the web address indicated

You will find all the information on this page, with the (light) procedure to participate. It's in English, but it's easy enough to translate today if needed.

Note, it's important, that the way of naming the images has changed a bit, with a priority on the date, which comes first, so that the access to the data is simpler for the professionals, but this only modifies at the margin all that we have already discussed.

You have Miho's email address at the bottom, but note that she is very involved in the scientific work with ESA, she will be quite busy during this period. But you can ask her for clarification. To a certain extent I can relay (but no luck, I'm on the other side of the Earth from October 10th, on the side of Reunion Island, where I'm leading a course with Valerie... Sol'Ex - I won't have all the facilities).

A banner has been put on the right side of the page which shows in quasi real time the news around the Sun with the SPICE team. It is good to read and follow.

It remains to hope that the weather will improve. Let's sharpen our weapons, our magnificent solar instruments!

Christian,
On the time would one use their local time or UTC? UTC would seem to be more appropriate.

UTC. That was covered in the first message from Christian above.
The dating format is formal too. YYYYMMDD_FFF

Thanks Chris. I must have overlooked it.

UTC. That was covered in the first message from Christian above.
The dating format is formal too. YYYYMMDD_FFF

Just an update. There is no mention about UTC time in the latest information. Sorry ...

Look at the screenshot. 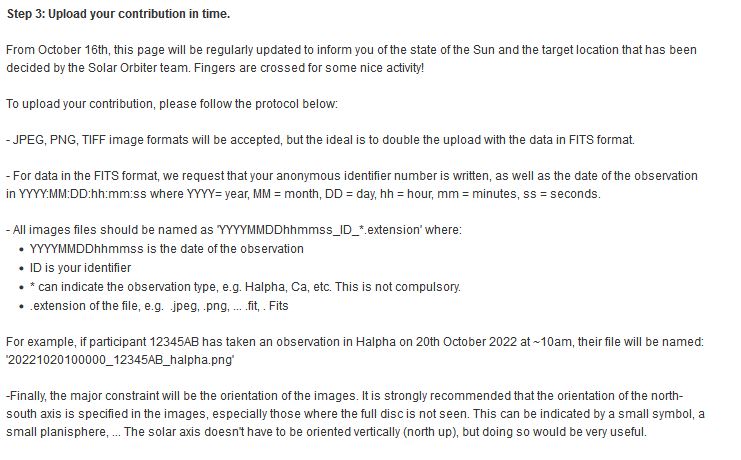