by thesmiths
We have done another minor upgrade to the previous version of our software. Mainly there are some bug fixes that I discovered over the last few months of using it. One small error crept in as a result of a Python library update that itself had a bug in it. I only noticed it when I recently got a new Windows 11 laptop and did a fresh Python install. This led me to think about creating a Windows executable, which would then not be dependent on which version of Python or which versions of libraries a user had on their computer.

The full Python files can be found here:

The executable only file can be found here:

To create the Windows executable file I used the very nice Python utility called "auto-py-to-exe", which is basically a GUI that runs another utility called "pyinstaller". Most of the problems new users have had related to the proper installation of the Python environment, which is a bit tricky for a non-specialist. So the Windows executable means no additional Python software needs to be downloaded.

The executable file is only around 120MB and I found it can even run from a USB stick. It's best to keep the executable file in its own folder because it creates a support file called SHG.ini that stores the recently used parameters (like data file location). I have tested the executable on Windows 10 and 11 and it seems to run on both of them.

I think the only reason to actually download the full Python version is if you want to make changes yourself to implement new features. For most people, I think the Windows executable file will be much more convenient.

I believe that "auto-py-to-exe" will run on any platform that Python runs on so it should be possible to also make Mac and Linux executables. Since I do not have computers running up-to-date Mac and Linux operating systems, I will leave it up to others to create executable files for those platforms if they so desire. I attach a screen shot of how I created the executable file. 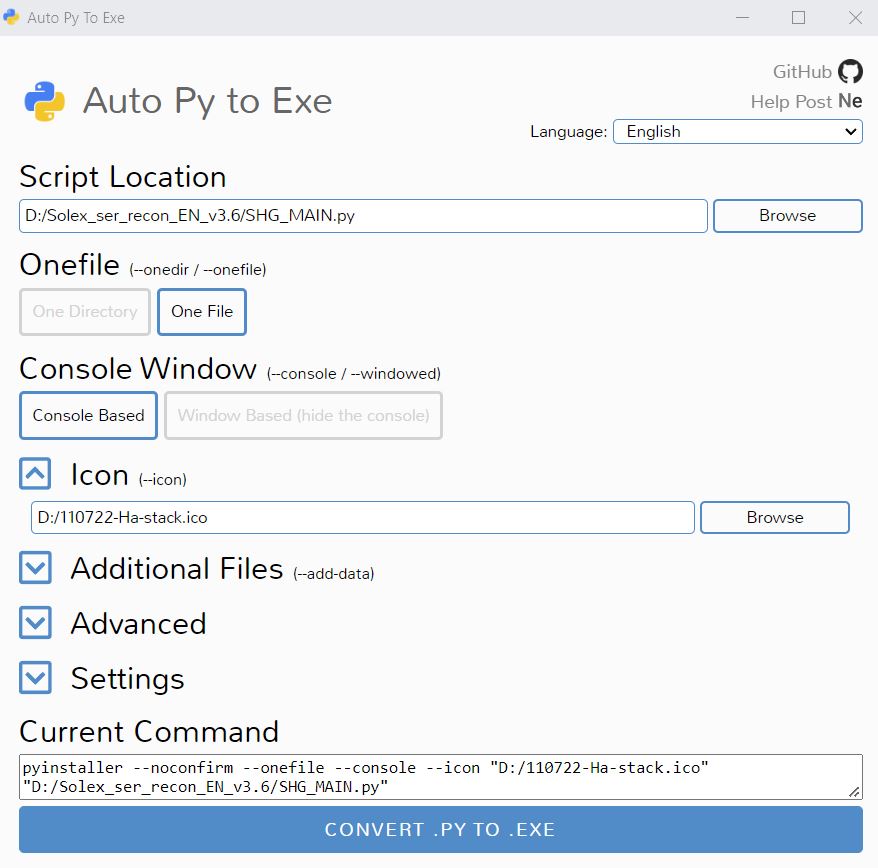 
By the way, I discovered the useful Python command "pip list" (typed in a command monitor) which gives you a full list of your installed Python libraries and their versions. This is useful for tracking down errors when running Python programs (obviously not relevant if you are running the Windows executable version).

by thesmiths
EDIT: We made a technical change to how the user parameters are stored (based on a suggestion from a user) and decided to release a new version (v.3.6.1 vs v3.6) with this change. A small fix was also done to how the "live view" graphics displays the reconstruction. The original post above was therefore edited with links to the new software v3.6.1 release.

EDIT: A slightly updated new version was added, v3.6.2. The links above were edited to point to the newest release.
All times are UTC
Page 1 of 1