I LOVE finding out about different ways to appreciate the Sun and light in general. Use this forum to post your info or questions about various outside the mainstream ways to appreciate our life giving star!
Post Reply
6 posts • Page 1 of 1

I realised that the photos of our SHG equipment setup were scattered across several different threads and even I had trouble finding them. I decided therefore to collect them all in one place and add some commentary. Recent photo of our SHG setup. APO triplet refractor, HEQ5 Pro mount. Note the telescope is pointed at the eastern horizon to get the early morning light. This photo was taken just before the Sun rose over the trees. The SHG by design can only scan in DEC, but generally I believe most mounts will scan better in DEC than RA. 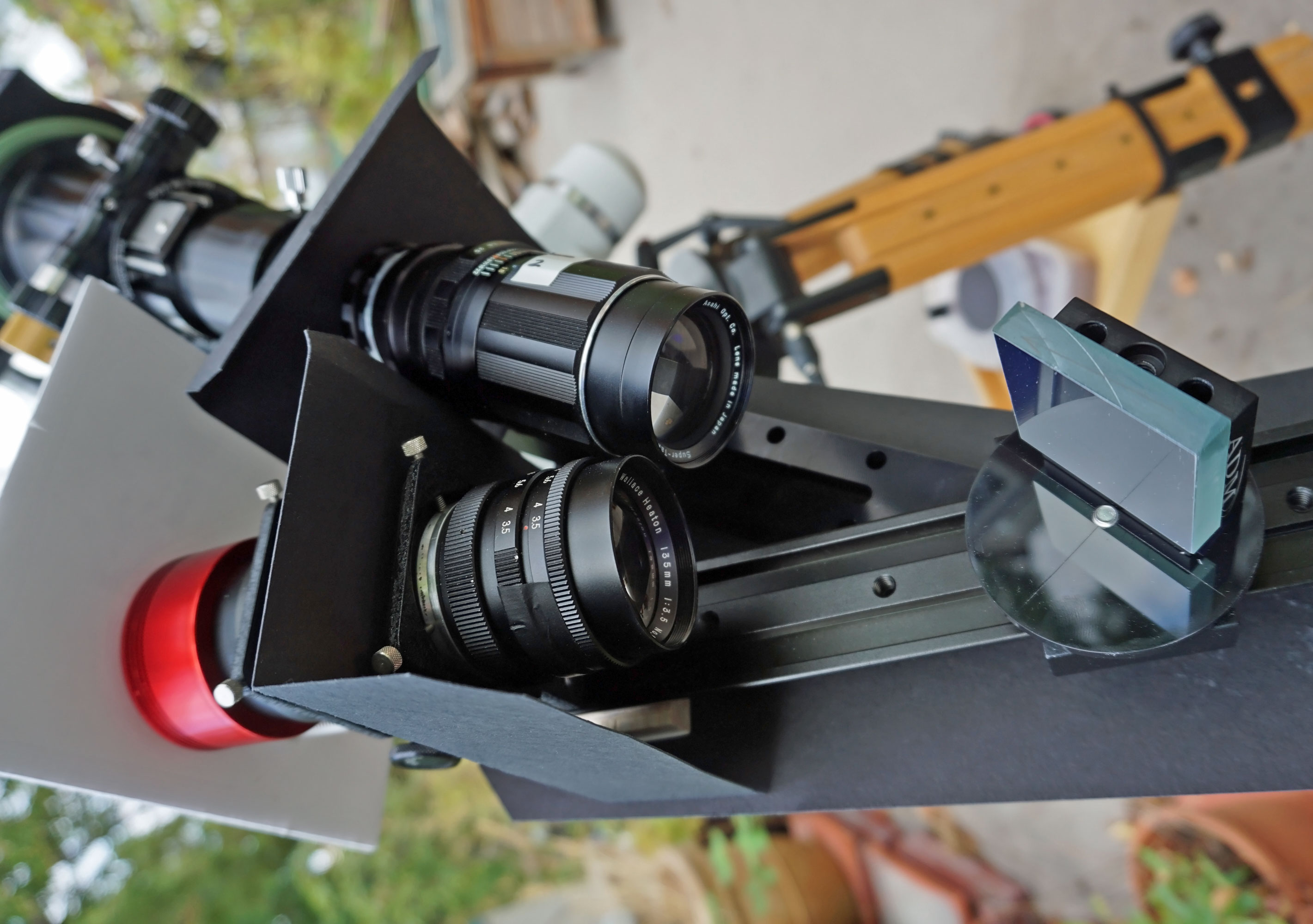 Closeup of the SHG optics. The grating is mounted on a rotating disk which is attached to a dovetail clamp so it is removable and swappable. I have one for 2400 l/mm and another for 1800 l/mm. The one shown is a 2400 l/mm holographic grating and the angle is adjusted to view H-alpha. Overview of the SHG optics. Both lenses are 135mm f3.5. Everything is mounted on Vixen-style dovetail bars. The collimator is a 135mm f3.5 Asashi Pentax M42 lens. The camera lens is a 135mm f3.5 macro bellows lens.

The collimator and slit are attached directly to the telescope focuser. This allows very smooth focus at the Feathertouch (I plan to soon attach a ZWO electronic focuser to allow remote focus). The grating and camera are attached to Vixen-style dovetail extensions which are attached directly to the telescope tube rings. The lower dovetails are ADM universal dovetail bars, which are very rigid and strong. The upper dovetail, which holds the grating and the camera, is lighter and attached to the end of the ADM dovetails with a single 1/4-20 bolt. The angle between the collimator and camera can be adjusted. The 1/4-20 dovetail bolt sits directly below the 1/4-20 bolt that holds the diffraction grating disc. Top view of the SHG optics (updated recently with a tilt corrector in front of the slit and a helical focuser in front of the camera). The camera is mounted on an M42 macro bellows from BPM. Course focus is via the bellows and fine focus by an M42 Pentax helical focuser in front of the camera. The blue and red tape on the 2400 l/mm grating disk indicates the approximate rotational positions for H-alpha and Ca-K (currently positioned for Ca-K). The white tape on the collimator lens indicates the correct focus for H-alpha; it changes very slightly for shorter wavelengths but doesn't necessarily need to be changed (unlike the telescope focus). The camera focus is relatively straightforward, but the telescope focus is fairly challenging (which I why I plan to soon include an electronic focuser on the Feathertouch). View of the SHG with its straylight cover on. It is made from black foamboard, black cardboard and blackout curtain material (black inside and white outside). It slides onto the end of the camera dovetail. The piece of white foamboard behind the camera is a sunshade to prevent the camera from overheating. I typically put a big rubber band around the cover (see first photo above) to better seal out straylight and to prevent the cover from moving. 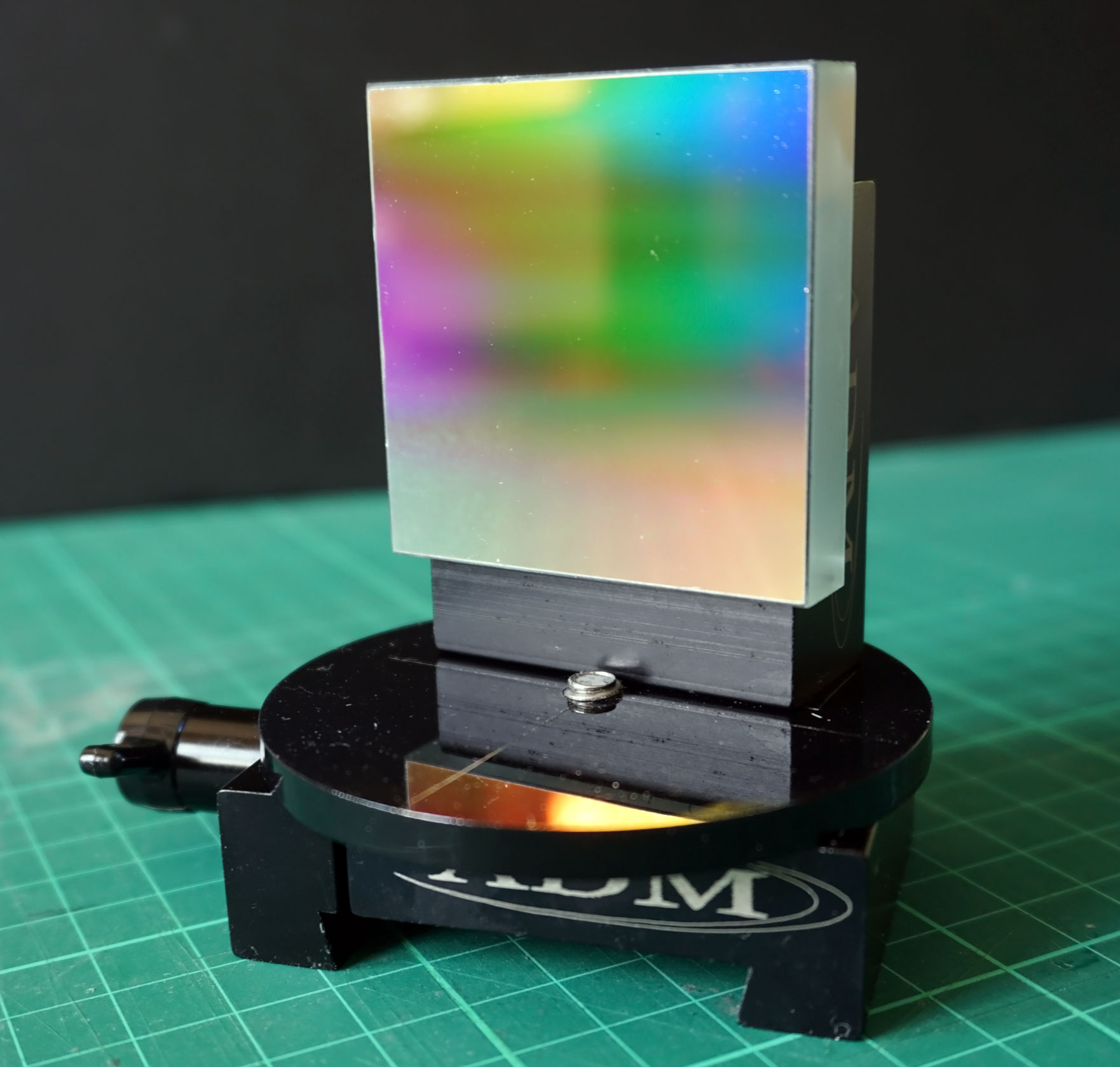 Diffraction grating (in this case 2400 l/mm holographic, 50mm x 50mm), mounted on an ADM dovetail clamp. The plastic disk has a central threaded 1/4-20 hole. There is also some special high-viscosity grease on the bottom side of the disk to provide a smooth rotational feel (so that it moves easily but also stays in place). The L-shaped aluminium holder for the grating itself is from a disassembled ADM dovetail clamp (they are well made and quite precisely machined). The grating is attached to the aluminium holder with Scotch double-sided tape, as is the holder to the black plastic disk. The front surface of the grating is directly above the centre of the rotational 1/4-20 bolt. 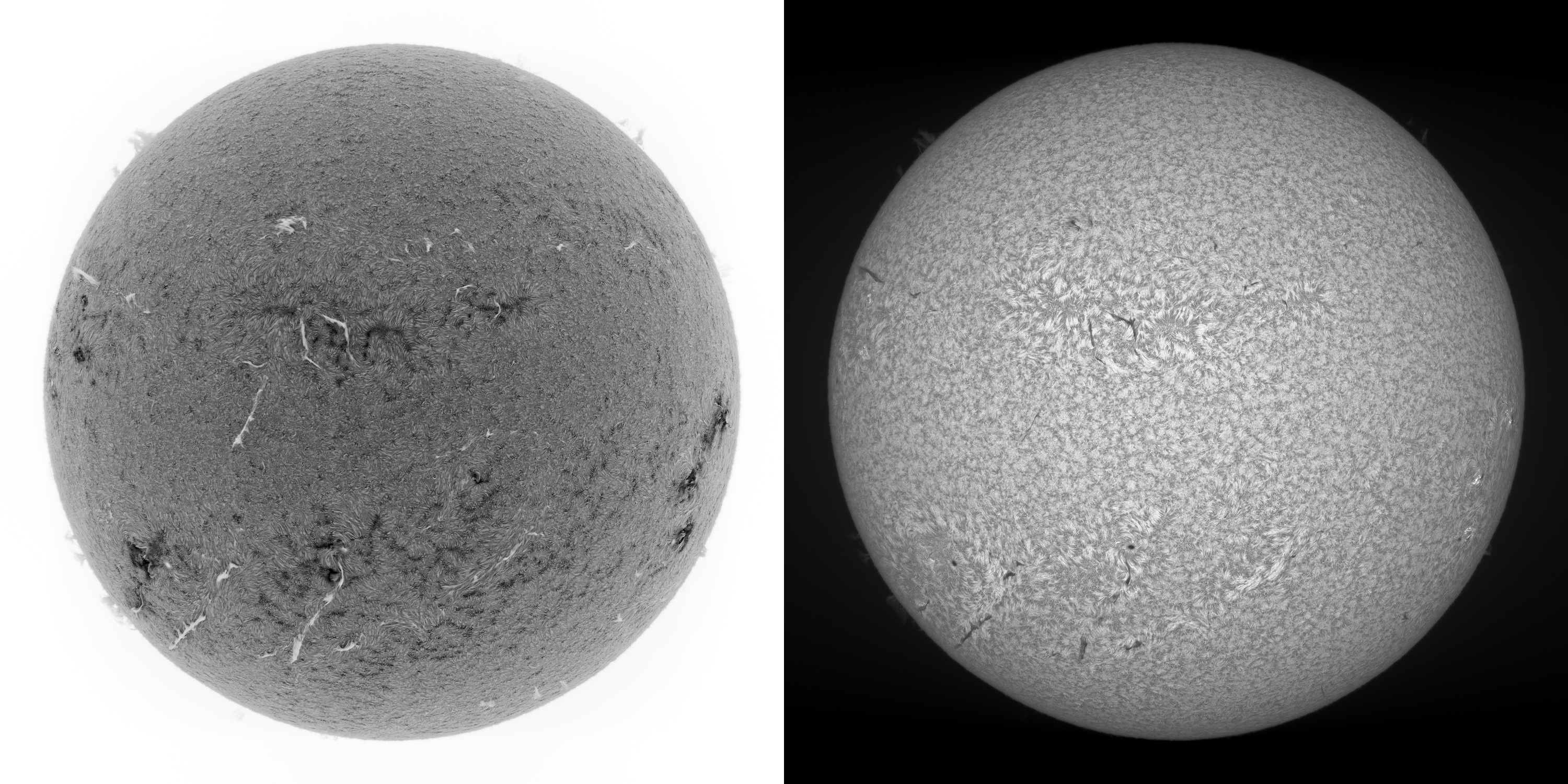 If you are using our software (see viewtopic.php?t=38137), then for full-disk scans, you can just choose the option "Crop square". It then makes the width the same number of pixels as the height. Normally, for a series of scans, the height is kept the same and the width varies because of different acquisition times. I keep the "Crop square" option on by default of full-disk scans.

However, the "Crop square" feature will not work if you only take a partial scan (e.g. the top hemisphere), because then the width actually needs to be some amount wider than the height. In this case, you would need to do some Photoshop cropping before stacking to make the images the same width. I always enjoy these posts Douglas!

I really like seeing you image with the SHG in Hydrogen Beta. It's certainly an under-imaged spectral line. That's the greatest appeal concerning an SHG to me, is it's ability to image seldom imaged spectral lines off the beaten path. Like Hb, Sodium, Helium D3, Magnesium, etc.